Health’s vacuum at the top

Despite the government’s resolve to defuse Labor’s Medicare attacks, the federal budget isn’t looking so generous under scrutiny 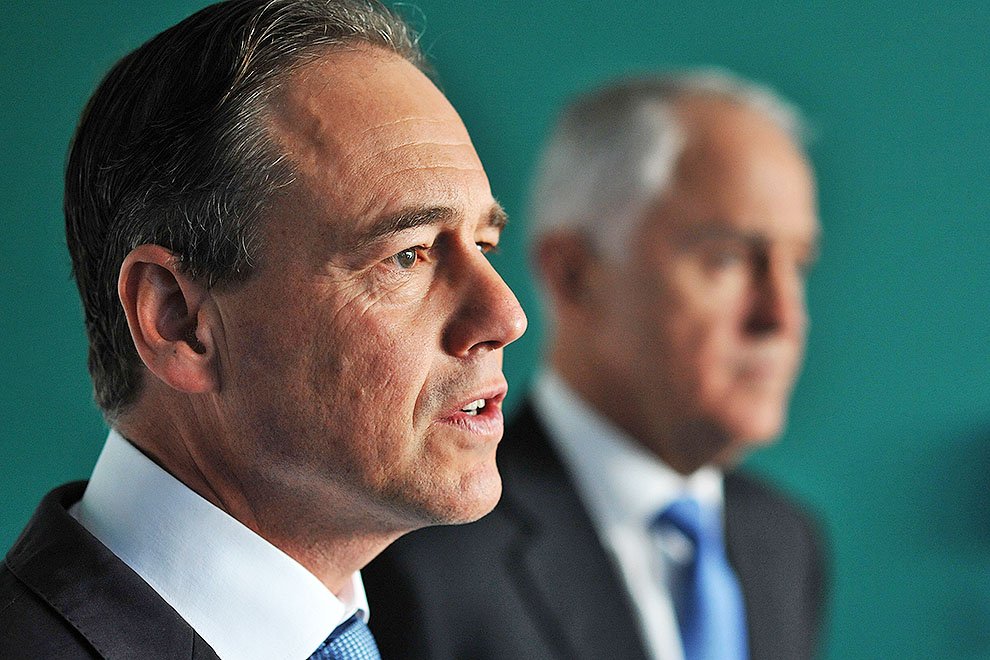 Devil in the detail: health minister Greg Hunt and prime minister Malcolm Turnbull during a post-budget visit to St Vincent’s Hospital in Sydney on 12 May. Joel Carrett/AAP Image

Each federal budget is invariably followed by weeks, and sometimes months, in which policy analysts unearth the real benefits and costs of spending decisions. Too often, what they discover are flaws in the logic of new policies, a lack of appropriate modelling, evidence of cost-shifting and a dissonance between reality and the claimed impact. So it has proved this year for the health portfolio, despite the government’s headline claim that spending will be a net $3.8 billion higher over the years 2017–18 to 2020–21.

As the Financial Review’s Laura Tingle pointed out, the budget coverage suggested that the “do nothing” government suddenly seemed to be doing quite a lot in policy areas like Medicare, which is typically seen as a Labor strength. But, thanks partly to the damage wrought by Tony Abbott’s first budget and partly to the vacuum in policy-making and reform, this health budget seems designed to appease rather than to please, to maintain and support the current system rather than drive forward needed reforms.

The problems are highlighted by tracking where the money goes. The budget includes $2.2 billion for so-called zombie measures in health: the unlegislated “budget repair” measures from 2014–15 and 2015–16 that would have increased co-payments and safety net thresholds for the Pharmaceutical Benefits Scheme, removed bulk-billing incentives for diagnostic imaging and pathology services, and limited the Medicare safety net arrangements. It also includes $960 million to reverse the Medicare indexation freeze. Once these measures – which simply restore the status quo of three budgets ago – are taken into account, the health outlays don’t look so generous.

Worse, we now know that the reversal of the Medicare indexation freeze – a decision designed to win over both the medical professions and their patients – doesn’t cover all procedures and will phase in only slowly. As the budget papers reveal, the reintroduction of indexation won’t be complete for four years, starting with bulk-billing incentives for general practitioners from 1 July 2017, followed by standard consultations by general practitioners and specialists from 2018, and then specialist procedures and allied health services in 2019. Most doctors will still face increased costs, and patients’ out-of-pocket costs will continue to grow.

These shortcomings highlight the fact that the budget provisions are not well aligned with the government’s professed positions. Health minister Greg Hunt has made an “absolute commitment – core, fundamental, unbreakable commitment – to universal access and to Medicare,” but with out-of-pocket costs higher than ever, this is an empty commitment for many patients, especially those suffering poor health and a low income.

The devil is in the detail. We now know that indexation won’t apply to items that reward doctors and multidisciplinary care teams for developing coordinated management plans for patients with complex chronic conditions or mental health disorders. Chronic disease and mental illness (often occurring together) are placing an increasing burden on the Australian healthcare system. With most of this kind of care provided by general practitioners, management plans developed in consultation with patients help coordinate with other clinical professionals and increase patients’ understanding and ability to self-manage.

In 2013–14, general practitioners received $588 million for planning, coordinating and managing chronic disease and $119 million for planning and reviewing mental health treatment. This substantial investment clearly needs to be increased and better focused. As a Grattan Institute paper highlighted last year, ineffective management of chronic conditions in primary care means worse health outcomes and higher healthcare costs. Improvements are unlikely to occur when GPs feel they are not financially rewarded for the time invested.

The one reform proposal the government has on the books, Health Care Homes, is now also threatened by delays, along with concerns from stakeholders about the paucity of detail and funding, and an apparent lack of leadership from the Department of Health. The budget announced that the scheme was being delayed following advice from the clinician-led implementation advisory group, and provided no additional funding. Health Care Homes will rely on an estimated $93 million in Medicare funding redirected for clinical service delivery, and it isn’t clear how the delays and gaps in the re-indexation of Medicare will affect that funding.

I have previously written about the ingredients needed to make a success of Health Care Homes, which is designed to shift funds from fee-for-service to bundled monthly payments and to change focus from consultation numbers to indicators of improved health outcomes. Much of the original enthusiasm for this innovative idea is waning, and the government’s policy advisers seem committed to testing only one model in an unreasonably short timeframe. Anecdotal reports suggest that many general practices that were interested in being part of this initiative have been deterred by the application process, which may explain why so many corporate practices were among the first to be listed as participants.

Change is also potentially under way in mental health, an area of personal interest to the health minister. But even these reforms, based on the findings of a review commissioned by the government and informed by a specialist advisory group, are endangered by laissez-faire implementation and limited resources, especially outside metropolitan areas.

Much of the responsibility for delivering mental health services has been handed over to the Primary Health Networks, which are expected to commission “contestable” mental health services. The networks need more detail and guidance to undertake this task and deliver the proposed “stepped care” model. At the other end of the spectrum, people with severe and enduring mental illness will now receive assistance under the National Disability Insurance Scheme, despite serious concerns about how well the disability model fits people with these conditions. Including mental health in the NDIS will require considerable effort, flexibility and cooperation across governments.

Some 100,000 people – those who once received individual support from federal and state programs – could fall through the gap left between these two disparate systems, which makes the budget’s extra $80 million over the next four years for psychosocial support services for this group a welcome development. But those funds are contingent on a matching commitment from the states and territories. It’s not clear what will happen to people in states that don’t fully comply. And even if the full matching funds are provided, this represents just $480 per person per year.

Mental health remains chronically underfunded and access to new services that are being developed seems likely to depend on where people live. This has rightly been described as a system of chance rather than good planning or effective reform.

Those are among the examples that conflict with the Turnbull government’s commitment to reform. They exist despite, or perhaps because of, health minister Hunt’s statement that the government is working on a long-term national health plan with four pillars: Medicare, hospitals, mental health and medical research. The scepticism among policy analysts arises not just from the retrograde focus of the purported plan (where is prevention, for instance?) but also because the minister and his department appear to be proceeding along different tracks. Sometimes it appears that neither knows (or wants to know) what the other is doing.

Departmental secretary Martin Bowles told a Senate estimates hearing that he “knows nothing” about the Medicare and PBS guarantee fund announced in the budget and was not aware of the four pillars of Hunt’s national health plan. Meanwhile, as revealed in documents leaked late last month, the secretary and senior departmental staff appear to have engaged in policy development without the agreement of the minister.

Officers in the department had been considering a proposal to simplify how hospitals receive federal funding. They were looking at what the federal government gives to the states for public hospitals, and at how federal funds flow to private hospitals via Medicare and, indirectly, via private health insurance. As the Grattan Institute’s Stephen Duckett has pointed out, the flow diagram of these arrangements resembles an “upended bowl of spaghetti.” Much room clearly exists for reform, clarification and coordination of public and private provision of hospital services, and for ensuring better value from the burgeoning federal contribution via the private health insurance rebate.

This is just one of many contentious and costly health policy problems kicked down the road by the Abbott and Turnbull governments. Another is the failure to tackle obesity in a concerted manner. The government repeatedly expresses concerns about hospital costs and the sustainability of the healthcare system, but it continues to pay for care once people get sick rather than invest in prevention.

When the prime minister told the National Press Club in February that “a new focus on preventive health will give people the right tools and information to live active and healthy lives,” he created an expectation that this budget would deliver matching initiatives. But the budget provided just two modest amounts: $10 million to establish a Prime Minister’s Walk for Life Challenge; and $5 million for a Healthy Heart partnership with the Royal Australian College of GPs to encourage general practitioners to help patients lead healthy lifestyles.

Despite all the evidence on obesity’s impact on workforce productivity and its role as a major risk factor in early deaths caused by diabetes, heart disease and cancer, the government has stubbornly hewn to the mantra that changing diet and exercise habits is a personal responsibility. A costed proposal has shown how prevention efforts might be funded by a tax on sugary drinks; alone, it wouldn’t solve the obesity epidemic – these drinks account for an estimated 10 per cent of the problem – but it would help.

As the health secretary told a Committee for Economic Development of Australia forum last year, the Australian health system “continues to fail some of the most vulnerable and disadvantaged Australians.” The budget did little to halt Australia’s sleepwalk towards a two-tiered and increasingly inequitable healthcare system. • 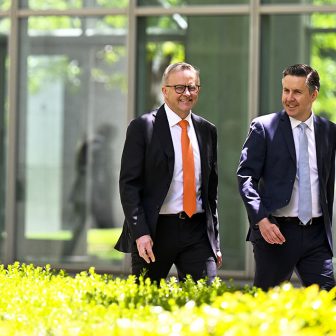