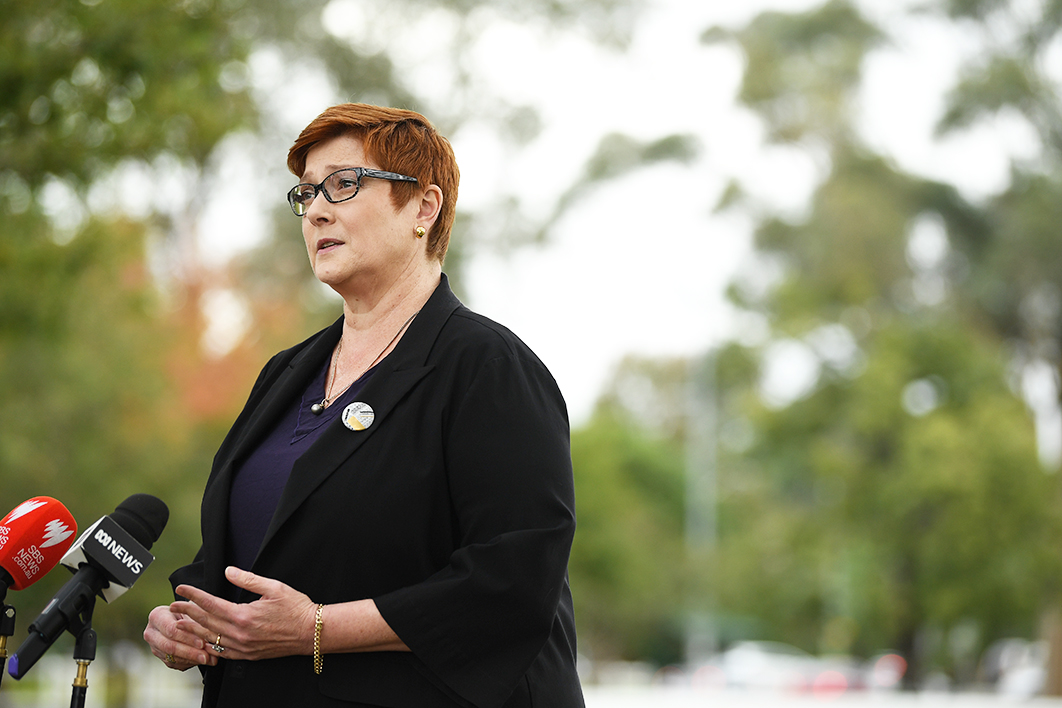 Despite a statement by women’s minister Marise Payne, women were largely ignored in this year’s budget. Joel Carrett/AAP Image

The Morrison government seems to think economic stimulus is all about high-vis vests and hard hats. It’s a narrow and dated view of the world of work.

Tuesday night’s budget included several broad measures to support business and jobs, including its tax write-off for business investments and wage subsidy for employing young people. These look like sensible measures, albeit ones that bet heavily on business to lead the recovery. But when it comes to targeted policies for job creation, the 2020 budget is a sea of hard hats.

The three sectors with the most targeted support are all bloke-heavy: construction (more than $10 billion so far through the crisis), energy ($4 billion) and manufacturing ($3 billion). An extra $10 billion goes to transport projects, another boost to construction jobs in the building phase.

The problem? That doesn’t fit the story of this crisis. Unlike past recessions, the worst fallout in the Covid-19 recession has been in services sectors. Hospitality, the arts and administrative services have all been hit hard. These sectors are dominated by women, which is one reason women’s employment has taken a bigger hit this year.

Yet these sectors received next to nothing in the budget. They are also less likely to benefit from economy-wide supports such as instant asset write-offs because they are the least capital-intensive sectors.

The federal government could have helped these sectors in many ways. Overseas governments, and some state and local governments, have funded vouchers and discounts to encourage people back to restaurants, cafes and regional tourist destinations. Grants or direct support to help the arts sector revive could provide a desperately needed boost to our creative recovery.

The government could also have created many more jobs by directly investing in government services. Services create more jobs than infrastructure per dollar spent, and they have especially high economic multipliers right now.

The budget initiatives in education, aged care and mental health are welcome, but very small in the scheme of new spending. Major investments in aged care and education would be a jobs boon and could have provided a more rounded vision for the recovery.

“This government recognises that women have been significantly impacted by the Covid-19 pandemic,” the federal minister for women, Marise Payne, said just before the budget, “and it is critical that we focus on rebuilding their economic security as a priority.” Yet the government has left the biggest opportunity on the table. Making childcare more affordable is the most effective way to reduce the gender gap in working life and retirement — directly supporting jobs and the economic recovery.

The Grattan Institute has recommended a $5-billion-a-year package that would make childcare significantly cheaper and improve the workforce-participation incentives for primary carers (still mainly women). Instead, women seem to have been relegated in this budget to an afterthought in the form of a $240 million “support package” that offers no meaningful economic support.

All of these omissions are even more glaring given the spending on other areas and groups with far less need for support. Sizeable measures are targeted at energy, agriculture and defence. Yet all of these sectors have increased their total work hours since March. Another $3 billion is slated for manufacturing, a sector that has shed jobs during the crisis but should bounce back more quickly than “social consumption” businesses such as hospitality, retail and personal services.

Construction spending is needed because a crunch is expected as housing construction slows. But the focus on major transport infrastructure for job creation doesn’t make so much sense. These projects are less jobs-intensive. And states such as Victoria already have a big pipeline of large projects, so have little capacity to deliver more.

The $3 billion for shovel-ready projects focusing on road safety and local roads is better targeted to create jobs. But the government has missed the opportunity to deliver a major social housing spend to provide something desperately needed that would also help mitigate the downturn in housing construction.

To achieve its stated objective of getting unemployment well below 6 per cent as quickly as possible, the government should be focusing on stimulating sectors where activity has fallen the most — especially services sectors.

But this budget overlooks the hard hit in favour of the hard hat. The government should check this blind spot quickly.

Danielle Wood is Chief Executive Officer of the Grattan Institute, where Kate Griffiths is a Fellow and Tom Crowley an Associate.