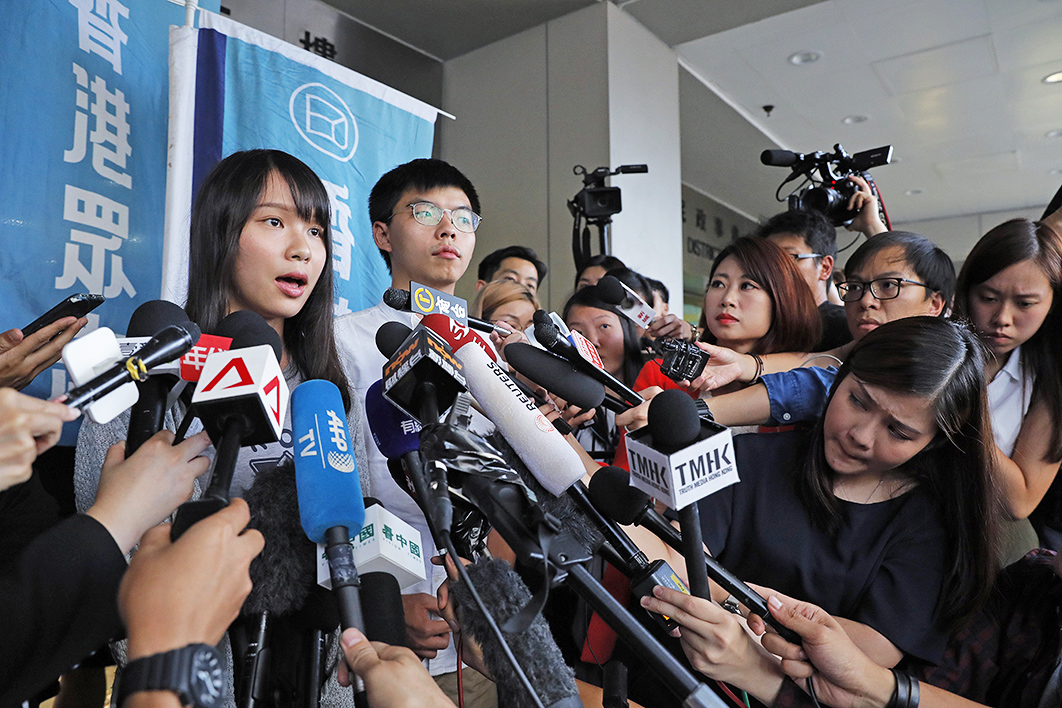 Time on their side? Pro-democracy activists Agnes Chow and Joshua Wong outside a district court on 30 August after being granted bail on charges of having incited people to join a protest. Kin Cheung/AP Photo

Hong Kongers, and especially the city’s students, have been on the streets for five months now. This has become an existential cause for many of them, and they are showing few, if any, signs of weariness.

Their struggle has intriguing echoes of the “spirit of struggle” that Xi Jinping urges on the Chinese people, a phrase he used sixty times in a speech to officials at the Central Party School in Beijing last week. The development of Marxism and of a socialist nation was full of difficult struggles, the president said, and achieving a great dream also takes a great struggle.

One of China’s more persistent stereotypes, especially among the northern mandarin elite of the imperial and now the communist dynasties, is that the Cantonese-speaking people of the south — especially Hong Kongers — are greedy folk readily satisfied by the opportunity to make money. How hollow that perception seems today.

While Beijing persists with its own watching game, the demonstrators are showing extraordinary determination. One by one, pro-democracy leaders are being arrested, although they are also being bailed.

Many Australian and other onlookers are puzzled by these events, unsure why Hong Kongers appear to be expending so much energy at the risk of the kind of state violence unleashed by the People’s Republic in 1989. But it is equally puzzling that the goals they are pursuing — representative government, rule of law, free expression and access to information — should appear so remote from our own priorities in Australia, and should fail to resonate among our own student populations, excepting those from Hong Kong and the Chinese mainland.

For many desperate young Hong Kongers, it feels like the last roll of the dice. They believe that core features of the way of life they have grown to treasure, as well as their desire to choose who rules the city of seven million, are under remorseless threat. They worry that the “one country, two systems” formula devised by Deng Xiaoping in negotiation with Margaret Thatcher is being steadily transformed into “one country, one system” that better fits with the staunchly unified, unitary China championed by Xi Jinping.

The late Lee Kuan Yew, founder and leader of Hong Kong’s great rival Singapore, forecast that sooner rather than later, his competitor would end up as “another Chinese provincial city.” That is the fate that the young demonstrators are attempting to resist. Their identity is wrapped up in the unique nature of Hong Kong; their interest is in maintaining that character rather than changing China itself. Xi’s “Thoughts on Socialism with Chinese Characteristics for a New Era,” meanwhile, which has been cemented into the state and party constitutions, emphasises the current era’s differences from Deng Xiaoping’s hopeful era of reform and opening up.

“Young Hong Kongers want nothing to do with China,” an old friend of mine, former journalist and newspaper publisher Liu Kin-ming, recently told the New York Times. “They have no more interest in subverting China than they do in subverting Zimbabwe.” The same attitude pervades young Taiwanese, who are largely indifferent to mainland China, and young South Koreans, who rarely if ever think about the North.

These young Hong Kongers feel terribly let down by older generations. The city was passed from Britain to China without any politically significant effort by residents to have their views heard, and without any serious resistance to the process of swapping colonial status for rule by what feels like an imperial power.

Today, Hong Kong is governed by a professionally competent caste of mandarins who run the city much as they did under British colonialism, their allegiance transferred and their massive remuneration packages — originally introduced to counter corruption — still ranking them among the world’s top-paid public servants. The governor of the equivalent of the central bank is paid more than the chair of the US Federal Reserve, even though Hong Kong’s dollar is pegged to the US dollar.

The deals cut between this bureaucracy and the core tycoon dynasties in colonial times have also been maintained, restricting the amounts of land made available for development while those figures, almost all primarily property developers or financiers, drip-feed new estates from their precious land banks. The price of flats remains among the highest in the world, meaning that virtually all of those young demonstrators are still living at home with their parents as they reach their twenties and even their thirties.

Those who gaze over the border into the mainland — and many have travelled there, studied or worked there, or stayed with relatives there — used to be encouraged to feel, after the 1997 handover, that this was the face of their future, of their brightest opportunities. But steadily, this sentiment has eroded — especially during the Xi Jinping era of personalised, centralised power through extraordinary surveillance and control — and has been replaced by a new, probably unprecedented, sense of loyalty to the values they associate with Hong Kong.

Attempts in recent years to involve themselves in Hong Kong’s governance have been quashed. Fresh, youthful leaders who emerged from the Umbrella Movement in 2014 have been jailed, prevented from taking their seats in the legislature after getting elected, or pushed aside in other ways. They say they have tried to play the game according to the regime’s rules but have been banished by vested interests.

Two of those young politicians, Joshua Wong — arrested with fellow activist Agnes Chow on 30 August, then bailed — and his close ally Nathan Law, have told me that they still believe time is on their side. They intend focusing on engineering a better deal for Hong Kong when the fifty-year “one country, two systems” agreement ends in 2047. They will still only be fifty and fifty-three respectively. But many more protesters worry that Hong Kong will have lost not only its flavour, but its identity, by then. It’s now or never.

Jimmy Lai, the remarkable autodidact owner of popular Chinese-language Hong Kong paper Apple Daily, was smuggled from the mainland into Hong Kong to become a thirteen-year-old factory worker, and then built a massive fortune. “The Hong Kong identity… has really emerged much more into our consciousness,” he recently told CNN. “We identify as Hong Kongers like never before. If we fight, we might have a miracle happen. If we don’t fight, we have to submit to the tyranny.”

In democratic Australia, one of the best-known artists in the Chinese world, Badiucao — who has made his home here — and Cantopop star Denise Ho, flying from Hong Kong, were denied access to various public venues including the National Gallery of Victoria to hold public discussions (titled, after the tactic of the Hong Kong demonstrators, Be Water) of events in that city. In Hong Kong itself, middle-class families are placing their futures on the line to identify publicly with what they assert as their core values.

In Beijing, where Marxism has been revived energetically by Xi, the opportunity for constantly enhanced prosperity is seen as enough to keep Chinese people, including Hong Kongers, happy. The city’s developer-tycoons have been blamed by Chinese media for triggering the trouble with greed that denies to many young Hong Kongers the living standards to which they aspire. Also blamed is the shadowy influence of snake-like “black-hand” foreigners.

The counter-evidence is everywhere in the city. On a recent visit, I walked through the many long subway tunnels leading to the MTR (subway) station at Tai Po. For hundreds of metres, every square centimetre of the walls was covered by post-it notes, posters, photographs and artworks urging on the cause of democracy and free expression — and this was just one of many, many such “Lennon walls” throughout the city.

There is almost nothing that chief executive Carrie Lam — a cool bureaucrat — can now do to gain traction with the protesters, who are supported by millions of others. Even the withdrawal of the extradition law that triggered the whole train of events has had little impact.

Xi may have initially been happy with the opportunity for the state-owned media to package the “chaos” in Hong Kong for mainland consumption. It would have seemed like a good opportunity to contrast the stability wrought by the party at home with the mayhem generated by the capitalist-style system under the one country, two systems arrangement.

But the longer the protests persist, the greater the difficulty in persisting with this public explanation — and the greater the danger of infection spreading to some young mainlanders, as well as of cross-fertilisation between Hong Kongers and those ungrateful Taiwanese who have rejected even the one country, two systems formula.

Restraint is still likely for a few more months, however. Nothing should disrupt the grateful spirit in which people around China are encouraged and expected to greet the seventieth anniversary of the founding of the People’s Republic on 1 October. Then, on 11 January, come the Taiwan presidential and parliamentary elections. It may now be too late, Beijing realists may rightly feel, to “win” the presidential poll by seeing incumbent Tsai Ing-wen defeated, but there remains a reasonable chance that voters will elect a Kuomintang (Nationalist) majority in the parliament, limiting Tsai’s options in her second term.

After that, Beijing’s options in Hong Kong again broaden, as the clash of cultures reverberates noisily around our region. •

Rowan Callick wrote Comrades and Capitalists: Hong Kong Since the Handover (UNSW Press, 1998) after working there for four years as China correspondent for the Australian Financial Review. He went on to work in the same role twice for the Australian.