Despite the US and Australian governments, attitudes and technology are driving change 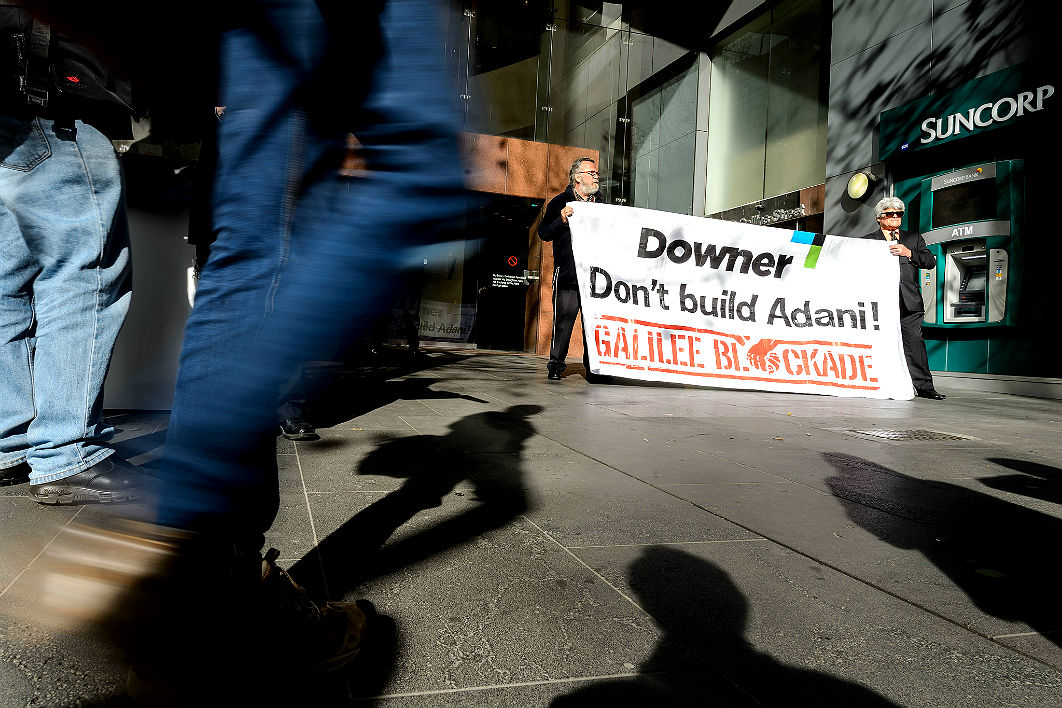 Last nail? Protesters outside the Melbourne offices of the Downer Group in June this year. The company was contracted to build the Carmichael coal project in the Galilee basin of Queensland, but the deal was rescinded in December. Julian Meehan/Flickr

On the face of it, there was plenty of bad news for the climate in 2017. Donald Trump announced that the United States would withdraw from the 2015 Paris agreement and promised to reverse the decline of the coal industry. The Turnbull government rejected proposals for an efficient transition to a low-carbon energy sector, instead announcing a half-baked National Energy Guarantee designed as a lifeline for coal-fired power. Globally, CO2 emissions appeared to rise by around 2 per cent, after remaining stable for three years in a row.

But a closer look reveals a lot more good news than bad, with two major developments standing out. The first is an emerging global consensus, encompassing national governments, financial institutions and civil society, that the era of coal-fired electricity generation must end, and soon.

Typifying this trend is the new Powering Past Coal Alliance, made up of national and provincial governments pledged to phase out coal-fired electricity generation by 2030. Launched with twenty members in November 2017, the Alliance expanded rapidly to include major businesses, and now has nearly sixty members. Its government members include Britain, Canada, New Zealand and a number of other developed countries, middle-income countries such as Mexico and Costa Rica, and developing countries such as Angola and Ethiopia. Not surprisingly, Pacific Island nations, endangered by sea-level rise, are well represented.

This consensus is not yet universal. Along with the United States and Australia, a number of national governments (notably Japan, Turkey and Poland) are still trying to keep coal-fired power alive. Strikingly, most of the recalcitrant governments are led by right-wing demagogues (Australia is the obvious exception, but our policy is arguably being driven by Tony Abbott and the Liberal right rather than our notional PM), and it’s reasonable to hope that their departure will see a reversal of their countries’ positions.

The financial sector has seen the writing on the wall. After a decade-long campaign by environmental organisations to end financial support for fossil fuel investments, the tide seems to have turned in 2017. The National Australia Bank’s recent announcement that it will no longer finance new thermal coal-mining projects is part of a broader global trend. It follows the adoption of similar policies by global banks including Citi, Deutsche Bank and BNP Paribas. Until very recently, many of these banks were big lenders to the fossil fuel sector.

More broadly, most of the leading European insurance companies have broken their links with coal or are about to do so. Pension funds are following suit. Government export financing corporations have mostly abandoned coal, with Australia’s Export Finance and Insurance Corporation a notable exception.

The second factor, technological progress, has been crucial here. Not only has the cost of solar photovoltaic and wind generation continued its steady decline, but battery storage has become a realistic option, both for large-scale grid management and for individual consumers. Tesla’s 100MW/129MWh battery in South Australia, installed in a matter of months, is already playing a vital role in the Australian grid.

The combination of technological change and political consensus means that a feasible path is now open to a rapid phase-out of coal-fired power and a fully decarbonised electricity supply system over the next couple of decades.

Developments in road transport have been equally significant, and perhaps even more surprising. Only a few years ago, electric and hybrid vehicles seemed likely to remain as a niche option for many years to come. During the course of 2017, Britain, France and India all announced plans to end the sale of petrol and diesel vehicles and replace them with electric cars. China has not yet made a formal commitment of this kind, but it has made clear its intention to dominate the market for electric cars, and has offered substantial tax rebates to promote this goal. Established car-makers in the United States, Europe and Japan have responded to the challenge, shifting investment away from internal combustion models and producing a full range of electric vehicles.

Once again, the process involves an interaction between technological and social change. On the technological front, substantial progress has been made in allaying the main concerns about electric vehicles: limited range and high cost. Not only can new models travel up to 500 kilometres on a single charge, but the network of charging stations in the United States and Europe is also comprehensive enough that the risk of being stranded on a long journey has effectively disappeared.

As has often been pointed out, electrification of motor transport is useful only if electricity is generated from a renewable source. What has attracted less notice is that electric vehicles constitute a vast potential for energy storage. If vehicles are charged during the early afternoon, when solar PV generation is at its peak and relatively few cars are on the road, the economic viability of solar-plus-storage systems large enough to meet the demand peak in the late afternoon and early evening can be greatly improved.

Most of the world’s leading industrial countries are now on a path to decarbonising electricity supply and electrifying transport. China and India have signalled their intention to follow the same path, although it will take them longer to change direction and they will still be using energy at a rapidly growing rate. At this point, the only question is whether the world will change course fast enough.

Few if any of these developments have been covered by Australia’s mainstream media, which is primarily focused on the Turnbull government’s internal struggles — struggles primarily driven, in turn, by the politics of the culture wars rather than by any rational position. The euphoria with which the eight-page sketch of a National Energy Guarantee was greeted by much of the press reflected the desire for a political solution to these struggles rather than any assessment of whether the policy was internally coherent, let alone consistent with the need for a decarbonised economy.

Regardless of media coverage or the lack of it, technological and political realities have begun to bite. After cynically exploiting the blackouts caused by storms in South Australia last year, the Turnbull government has been faced with the embarrassing reality that Australia’s ageing coal-fired power stations are not the reliable source of energy presented in the mythology of the coal lobby. Rather, the South Australian Tesla battery they derided has come to the rescue when coal-fired plants have failed (ironically, they are particularly prone to do this during heatwaves), attracting international attention in the process.

Meanwhile, the central political objective of the National Energy Guarantee — forestalling the closure of coal-fired power plants — has been a failure. Despite immense pressure from the Turnbull government, AGL has announced that it will proceed with the retirement of the Liddell power plant and its replacement by a large investment in renewables, backed up by peaking gas plants.

Even more striking has been the apparent demise of proposals to develop the massive, though low-grade, coal resources of the Galilee Basin in Queensland. The leading candidate, on which the others depend, has been the Adani Group proposal for a mine at the Carmichael site and a rail line linking the mine to the Adani-owned port at Abbot Point. The project would require billions in loan finance in addition to the $3 billion or so Adani has already sunk into the acquisition of the site and the development of the port.

Over the course of 2017, it became apparent that this finance was not going to be available. Following the lead of most of the main global banks, the big four Australian banks announced they would not fund the project. The coup de grâce was the announcement that major Chinese banks, now the leaders among the few remaining international lenders to coal projects, would not support the project. It is unclear if this outcome reflects a broader shift away from coal, the poor financial prospects of the Adani project, or some combination of the two.

The company’s last remaining hope was that the Australian government would finance the construction of the rail line through its Northern Australia Infrastructure Facility, or NAIF. Despite the longstanding popular appeal of developmentalism, it became evident in the first days of the Queensland election campaign that public opinion was strongly opposed to public financing of the project. Labor reversed its previous supportive stance and announced that, if re-elected, it would veto the NAIF loan.

It was expected that such a shift, while protecting Labor’s position in the urban southeast, would cost the party votes in regional areas — particularly in Townsville and Rockhampton, where Adani had promised to base its fly-in, fly-out workforce. The first part of this expectation proved correct but the second did not. Despite a modest swing, Labor held on to Rockhampton and Townsville, and it gained enough seats in the southeast to secure an absolute majority.

Shortly after the implementation of Labor’s commitment to veto the NAIF funding, the project’s demise came a step closer with the announcement that Adani had parted ways with Downer EDI, with which it had a $2 billion agreement to operate the mine.

Despite the efforts of Trump, Turnbull and others, it all adds up to a good year for the global climate. Until recently, the idea that we could eliminate energy-related greenhouse gases seemed hopelessly utopian. Now the world has a clear path to this goal, at least in the core areas of electricity and transport, while still maintaining and improving living standards. Let’s hope that 2018 will see further progress. ●