How does one get used to it? 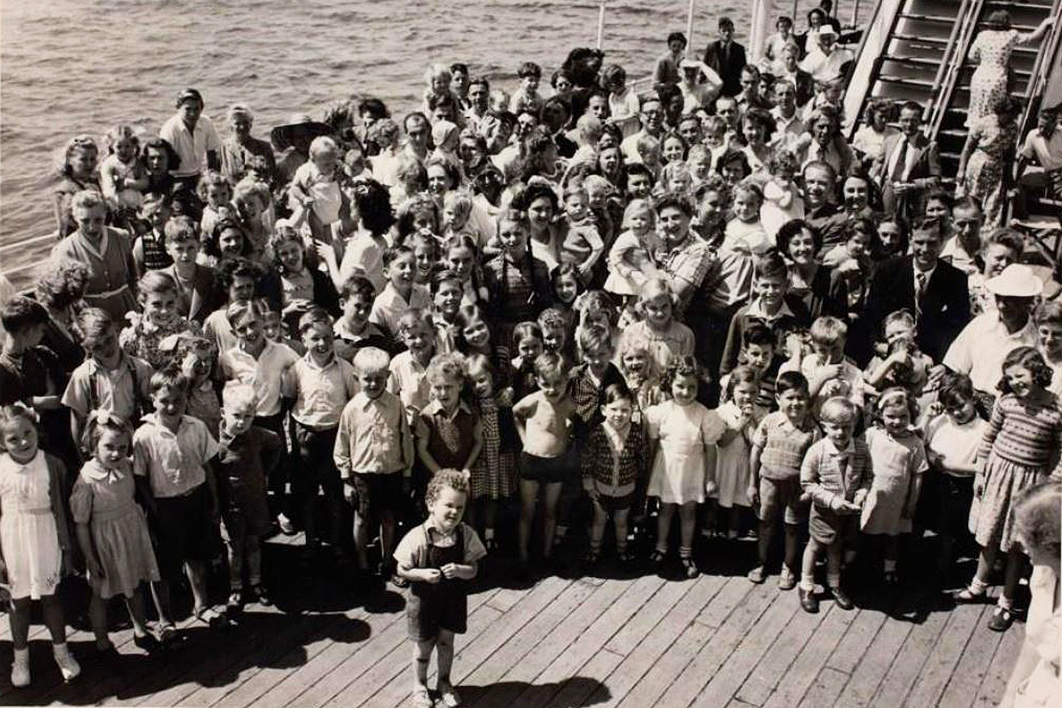 In the 1950s the young daughter of a Russian migrant was taunted with “DP means dirty pig” at a Victorian primary school. But DPs, or displaced persons, meant something different to countless human casualties of the second world war: the chance of a new life. Most had been uprooted from their homelands and forced to work as factory labourers in Germany or occupied Europe. Some, especially from Ukraine and the Baltic countries, had collaborated with the Nazis, and more than a million Russians, primarily émigrés but also Soviet defectors, wore the German uniform and fought under German command. All had been in mass resettlement camps, and it was from these camps that Australia selected vast numbers of its postwar migrants.

The first boatload arrived in November 1947; the last in 1952. They included a great many people who had altered their names and nationality. Masking their Soviet citizenship, they claimed they were Polish, Latvian or Belorussian, or simply “stateless,” claims that immigration officials were often unable to verify or invalidate. Disguising identity meant avoiding repatriation to the Soviet Union. Some also masked the fact that they were Wehrmacht volunteers rather than “forced labourers,” as they claimed. Immigration minister Arthur Calwell might have wished to discourage professionals, intellectuals and Jewish DPs, preferring “horny-handed toilers,” but, as Fitzpatrick wryly notes, many sailed to Australia under false colours and then “underwent a remarkable transformation from proletarian to educated middle class.” This dissembling extended to former Nazis entering Australia (some of whom removed SS tattoos), an issue sidestepped or denied by Calwell’s department.

Sheila Fitzpatrick brings to this remarkable cold war story of migration her prodigious skills as a historian and her international reputation as a distinguished scholar of the Soviet Union, especially the Stalin period. (There is even a “Fitzpatrick school” of Sovietologists in the United States.) Her Everyday Stalinism: Ordinary Life in Extraordinary Times: Soviet Russia in the 1930s (1999) was path-breaking and her On Stalin’s Team: The Years of Living Dangerously in Soviet Politics (2015) won the Prime Minister’s Literary Award for Non-fiction in 2016.

With White Russians, Red Peril, her tenth monograph, Fitzpatrick draws on research in archives in Australia, China, France, Germany, Great Britain and the United States. Her familiarity with the State Archive of the Russian Federation, recounted in the wonderful A Spy in the Archives (2013), enabled unique access — through repatriation reports from an undercover Soviet agent in Australia — to poignant accounts of desperately unhappy Russian DPs in Australia. Her use of Russian-language newspapers and periodicals in Australia permits insights into, among other things, obscure right-wing organisations such as the Russian Anti-Communist Centre, which from 1950 held their “Day of Irreconcilability” celebrations on 7 November to coincide with the Bolshevik seizure of power.

Anti-communism is a recurring theme of the book. The broader cold war environment in Australia is only fleetingly examined, although she notes the potent influence of anti-communism in explaining, for instance, the otherwise astonishing readiness of the Returned Soldiers’ League to support the entry of former German combatants. Rather, the emphasis is on “White” Russians — a slippery term that embraced first-wave prewar émigrés as well as Belorussians — for whom the cold war transformed disaffection with the Soviet Union into an anti-communist crusade. The superb opening chapter, “Displacement,” provides a historical context to a White Russian community that was far from homogeneous. Indeed, the serendipitous choices and complexities of fates and identities (evidenced here and in Fitzpatrick’s 2013 Mischka’s War) make generalisations impossible beyond three distinguishing features: commitment to the Russian Orthodox Church, concealment of national identity and wartime collaboration, and strident anti-communism.

Part two of the book concerns “China” Russians, centred in Harbin and Shanghai, the bulk of whom resettled in Australia from 1952 to the early 1960s. Prewar, Harbin was a thriving quasi-Russian city, with Shanghai home to 20,000 Russians. Very few were pro-Soviet. With the occupation of Manchuria, a minority became active collaborators with the Japanese forces or members of the Russian Fascist Party. In describing their wartime lives, postwar departures and resettlement experiences, Fitzpatrick here relies more heavily on secondary sources. But the narrative, as elsewhere throughout the book, is illuminated by an array of vivid biographical vignettes. These bring alive the lived experience (and memories) of individuals caught up in larger historical upheavals. Thus we hear Natalia Melnikov, fresh from Harbin, who spoke for the many who felt isolated and alien in 1950s Australia, plaintively asking, “So this is Australia… How does one get used to it?”

But for both European and Chinese Russians, the Orthodox Church was a comforting haven in this new country. Despite its internal fractiousness, its role in absorbing migrants into the Russian community was pivotal. It also played a part in espionage. Fitzpatrick has identified, again from the Russian archives, at least two Orthodox priests who were Soviet agents, and plausibly suggests that ASIO sought to recruit other priests as informants.

ASIO features in part three of the book, “Resettlement in Australia.” Numerous White Russians offered their services to ASIO, as did activists in the militantly anti-communist National Labour Union. These overtures were mostly rejected by ASIO, which continued to see Russians, whatever their political complexion, as potentially the most dangerous group of migrants. In the early 1950s the possibility of a third world war seemed real. The foe would be the Soviet Union and local Russians its fifth column. Having a White Russian monarchist father who had been decorated by the tsar and had fought the Reds in the Russian civil war didn’t shield Nina Christesen (née Maximov) from interrogation by Australia’s royal commission on espionage or subsequent suspicions of communist sympathies.

No history of Russians in cold war Australia would be complete without the Petrovs. Fitzpatrick confirms what Vladimir Petrov told the royal commission in 1954: that his brief as a colonel in the KGB was to cultivate a network of Soviet penetration agents within the White Russian community. Fitzpatrick is correct to say that Petrov was singularly unsuccessful (unless one counts, as he did, his apparent recruitment of double agent Michael Bialoguski or the ambiguous Lydia Mokras, both habitués of the Russian Social Club).

But Evdokia Petrov, a captain in the KGB, may have achieved more. A forthcoming article will suggest that she recruited an anti-communist Latvian who collaborated with the Nazis and arrived on the first boatload of DPs in 1947. ASIO was unaware of this but was, of course, aware of White Russians’ noisy presence at Mascot airport when Soviet couriers dragged Evdokia towards a Moscow-bound plane, and their demonstrations outside the royal commission when she testified.

White Russians, Red Peril is full of fascinating detail. Some examples: the first marriage of a future Whitlam government minister, “Diamond Jim” McClelland, then a Trotskyist, was to a pro-Stalinist Russian; Jennie George, a future ACTU president, was born Eugenie Sinicki to Russian parents in a DP camp; Labor MP Les Haylen dobbed in suspected communists (not Nazis) working on the Snowy Mountains scheme; and a shadowy White Russian organisation was exotically titled Federation of Zealots of the Sacred Memory of the Tsar.

This is an engagingly written book, sweeping in scope and erudite in analysis. It will stand alongside Fitzpatrick’s previous work as one of her finest accomplishments. The last five pages — on how Russian migrants balanced accommodation to Australia while retaining a sense of Russianness — are a model of wise judgement and shrewd synthesis. For anyone connected to the Russian diaspora, as well as historians of the cold war and migration studies, this is an essential read. •

Phillip Deery is Emeritus Professor of History at Victoria University. He has published extensively in the fields of cold war history, intelligence, communism and the labour movement.

Will a dysfunctional party organisation in his home state block Josh Frydenberg’s path to the Lodge? 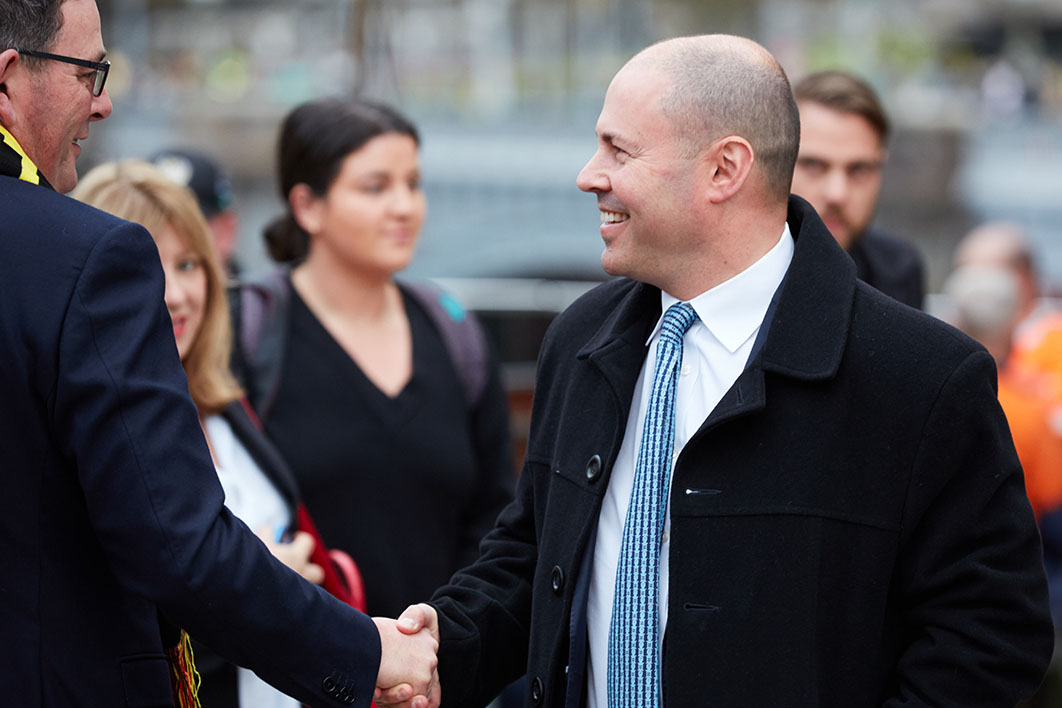