How it all went wrong 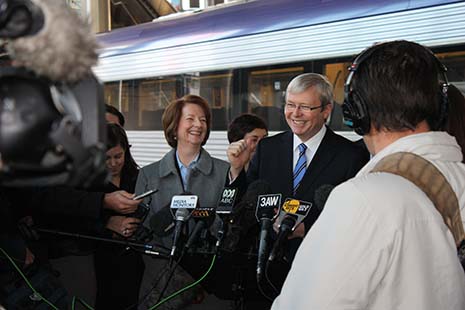 Power Failure: The Inside Story of Climate Politics Under Rudd and Gillard
By Philip Chubb | Black Inc. | $29.99

Dear Labor Party branch-stackers, here’s a book for you. Stop your letterboxing and number-crunching for a moment. Hold fire on those bulk party memberships and dodgy donations. Postpone your meetings with the union and faction heavies. The preselection nomination form can wait for a day or two because you’ve got some homework to do. I want you to pick up Philip Chubb’s account of the Rudd and Gillard governments and find a quiet spot. Somewhere out the back of a backbencher’s electoral office will be fine. Make yourself comfortable between the photocopier and the pile of old bumper stickers and then start reading.

The story you’ll read begins something like this. Once upon a time there was a government with hope and purpose and vision. It was freshly elected with a strong mandate from the people. It had energy and resolve. It was all set to do the difficult things to address one of the greatest problems facing the planet… It’s a story that will probably make you nostalgic – if you’re old enough to remember 2007, that is. You’ll recall those days when a much-loved prime minister said he was here to help and crowds cheered and fellow party members walked a little taller because Australia was playing its part in combating climate change. You might even get a little choked up as loveable Mr Rudd signs the Kyoto Protocol and receives a standing ovation before world leaders in Bali.

As you read on, curled up on the stack of old campaign posters with your cup of whatever branch-stackers drink these days, you might begin to realise that this tale isn’t a happy one. The promising “Ruddslide” will eventually look more like a disastrous avalanche, with the wreckage of climate change policy mangled among so many other Labor initiatives. But read on, you must, even as the book forensically recounts stuff-ups and miscalculations and as the government loses its way, its mandate and the support of the Turnbull-led Coalition for serious action on climate change. You must read every word, even though you know how it ends.

Chubb’s book is unrelenting. I picked it up thinking Labor had good intentions but had messed up the implementation of climate change policy. By the time I put it down I was worn out, close to concluding that Labor was a basket case, a party unable to turn an overwhelming mandate into policy and incapable of ruling itself, let alone standing united against a carping opposition. But this is an important book because it methodically chronicles Labor’s failures and, in the process, serves as a how-not-to manual for anyone interested in social reform. Those party hacks of tomorrow, the people who will have the thankless task of steering policy through the cesspit of party politics and on into legislation, should read it in order to learn from the mess that was Labor’s handling of climate policy in the years between 2007 and 2013.

Along the way, Power Failure explains how as a nation we lost our sense of global purpose; how we stopped caring about rising sea levels and started swallowing spin about the rising cost of living; how we were ground down by the unceasing negativity of certain politicians and the whining of the coal industry. Chubb demonstrates, rather poignantly, that we turned away despite the appalling heatwaves and bushfires of 2009, in which so many people died, including some of Chubb’s friends in the semi-rural region near Melbourne where he lives.

Where did it go wrong? Was it the breaking of the drought? Was it the failure at Copenhagen? Was it the sophism of Andrew Bolt or the scepticism of the Murdoch press? Or should we blame the rise of the dries in the Coalition, led by that master of negativity, Tony Abbott? While Chubb clearly considers these and many other factors to be important, it’s obvious he reckons the main problem was the leadership style, and ultimately the personality, of Kevin Rudd.

Rudd emerges as the chaotic, controlling, egotistical, centralising workaholic that we all got to know, ever so slowly, after the coup of 2010. He was clearly, according to Chubb, the wrong man for the job. For example, when Malcolm Turnbull was opposition leader Rudd knew that coalition support was vital to achieve lasting change. And yet he couldn’t resist the temptation to ridicule Turnbull in an effort to wedge and marginalise him. It might have felt good at the time but he was wrong to assume that the opposition would “fall right in line behind him” as soon as he stopped the game-playing. He failed to realise that Turnbull had his own battle to win, against the climate sceptics of his own party.

Rudd alienated the Greens as well. Based on the assumption that Coalition support would hold, he left Bob Brown and his colleagues out of the discussion so that when the matter reached the Senate they were thoroughly marginalised. This doesn’t excuse the Greens’ decision to vote down the Carbon Pollution Reduction Scheme in 2009 but it does help explain it. Rudd underestimated Abbott – but he was not alone in doing that. He amassed power around himself. He micro-managed climate change policy. He stopped listening to dissenting voices by limiting access to advisers. He was paranoid about leaking by colleagues, such as resources and energy minister Martin Ferguson, whom he considered a climate sceptic.  Simply put, “Rudd was the wrong kind of leader to attack a wicked problem like climate change.”

After the failure of the CPRS and the collapse of the climate summit in Copenhagen soon after, Rudd suffered a breakdown. As Chubb says, he “became quite detached from reality.” He quotes Wayne Swan saying “he’d attached all his emotional energy to it,” and Gillard concurring: “I think it hit him very hard personally.” Rudd gave up on climate policy and redirected his energy to reform of the health sector. He failed to understand the effect this would have on all those who had worked so hard to create the policy and on the voters who still cared enough about the issue.

Gillard’s ascendancy quickly followed. And this is where the negativity gives way to some measure of optimism. Chubb clarifies, if not corrects, the narrative that blames Gillard for the party’s decision to drop its commitment to act on climate change. She emerges as the pragmatist who only advocated shelving the policy while the party was paralysed by Rudd’s indecision. Once in office she certainly made errors, such as the early decision to shunt the matter off to a convoluted community forum and her overly formal deal with the Greens – and, of course, that statement that she would not introduce a tax on carbon. Initially she was not across the detail, but before long she was fully engaged. Her policy response, the Clean Energy Future package, was ultimately successful. It passed both houses of parliament, but at horrendous political cost.

Gillard was everything Rudd wasn’t. She negotiated herself into office in the hung parliament. She created a cross-party mechanism for revamping the policy, even extending an invitation to the Coalition to participate. She dealt her own cabinet and caucus into the decision-making. She told them what she was doing. She at least tried to popularise the issue, although not energetically enough, and when she did, she was mostly drowned out by competing voices and a virulent media. She is acknowledged for her achievements at wrangling something from near-impossible conditions.

Power Failure is lucid and readable. But this is not what you’d call a “don’t tell – show” account. The people and the places documented in the story don’t come alive in their particularity. (On one occasion we do get a visual sense, just briefly, of Kevin Rudd having a panic attack at a meeting at the Lodge, which he has to leave. We see him as he is calmed by an adviser as they take a walk.) It lacks those moments that Chubb managed to generate in his seminal television series Labor in Power, when the likes of Graham Richardson and Bob Collins took us behind the scenes and revealed the human stories behind the momentous decisions. Instead, this book’s strengths are in its cogent analysis of an obscenely complex area of policy and its crisp navigation through the opinions of named and unnamed sources. It is also a book that tells in another sense. Before long, Chubb dispenses with the academic and journalistic nicety of letting the reader decide and just tells us who was right and wrong. And that means Rudd gets a walloping.

But perhaps Chubb is entitled to. After all, he did interview just about everyone on the Labor side of politics and scores from the public service who were involved in the events he recounts. He even sought out and interviewed people in the Latrobe Valley as a counterpoint to the policy wonks and party apparatchiks. As he observes, Labor should have done the same. If they had spoken to the people of Gippsland they would have learnt lessons about dealing with the privatised power companies, which rattled the government with negative advertising and inflated claims about the cost of carbon pricing.

Chubb’s advice is cogent. But there is one piece of advice that might already have been proved wrong. He intimates that Gillard was wrong to admit on national television that her market-based mechanism to price carbon amounted to a tax and therefore a broken promise. He quotes Barrie Cassidy’s piece in the Drum that showed how easily Gillard could have shrugged off the suggestion that it was a tax. She could have said, “This is a charge on the country’s biggest polluters. It is no more a tax than your regular power bills.” This sounded to me like good political advice – leaving aside the dubious ethics – until Abbott and Joe Hockey did exactly the same following the 2014 budget. Their claims that they weren’t increasing taxes only made their broken promises seem worse.

This book is full of useful advice. I hope the politicians of tomorrow won’t turn straight to the table at the back that sets out the dos and don’ts of implementing policy. This thoughtful distillation of the book’s findings is not for you. Not yet. No, your task is to read every depressing and stimulating page in the hope that you will emerge with a little less hubris and a little more insight. You need to know that others have gone before you and, thanks to this book, we are able to learn from their mistakes. •

Andrew Dodd is the program director of journalism at Swinburne University of Technology.