In Myanmar, politics makes a comeback 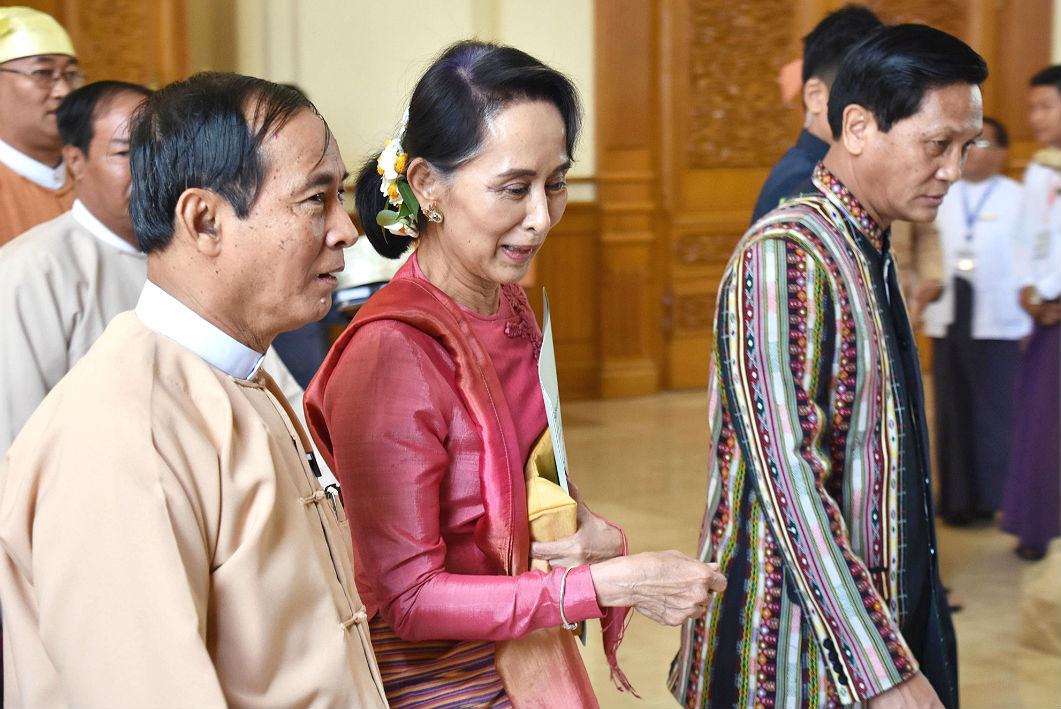 For the best part of a year, the crisis in Rakhine State has dominated Myanmar’s domestic affairs and international dealings. Everything else seemed insignificant, a sideshow at best. But suddenly, just like that, party politics is back.

At 10.41am on 21 March the president’s office posted a two-paragraph statement on its Facebook account. President U Htin Kyaw was resigning, effective immediately, to “take a rest.” I was in a meeting with my publisher at the time, and ran upstairs to the newsroom to help put out the first reports of his departure.

The announcement was both surprising and widely anticipated. Rumours about Htin Kyaw’s plans had been circulating for a year. He had twice been abroad for medical treatment. In fact, he had almost disappeared from public view. In the wake of his resignation, his wife — a law-maker with the governing National League for Democracy, or NLD — denied he is seriously ill and insisted he had never planned to serve a full five-year term.

But many Facebook users were quick to compare recent photos with shots from around the time he took office in March 2016. The latest images show a gaunt man, seemingly drained of energy.

Regardless of his reasons for resigning, his departure is a sad marker of the government’s first two years in office. Htin Kyaw is widely respected and has always carried himself with dignity. But he was effectively a puppet of Aung San Suu Kyi, who created the role of state counsellor to get around the constitutional ban on her becoming president. With so much power concentrated in her office, Htin Kyaw was never given the opportunity to perform to his potential.

His replacement is Win Myint, who resigned as lower-house speaker almost immediately after the president’s announcement. While Htin Kyaw typically worked behind the scenes, the new president is a more widely recognised politician. The fact that he was handed the speaker’s job back in February 2016 was a major expression of faith by the party hierarchy.

In Myanmar, as in the United States, the speakers of the two law-making chambers are key players; they decide when the legislature will meet, the order of business it will follow, and what can and cannot be said. They create committees and summon government officials to address law-makers. The position has been likened to that of ship’s captain — it couldn’t be further from the president’s ribbon-cutting duties.

As an Aung San Suu Kyi loyalist, Win Myint would be likely to settle for the ceremonial role she created for the president. But there are hopes that she will revise the relationship between president and state counsellor to better reflect Win Myint’s political skills and experience.

A stronger, more effective president — albeit one who is loyal to Aung San Suu Kyi and doesn’t create a competing centre of power — would deal with one of the key criticisms of the NLD administration: that too much control is centralised in the state counsellor’s office, creating a decision-making bottleneck. It’s unlikely, but not impossible. The centralisation of power is not Aung San Suu Kyi’s fault alone; her status is such that many ministers defer to her as a matter of course, routinely seeking her approval before acting.

While the manoeuvring around the presidency understandably grabbed the headlines, the more interesting development was Win Myint’s replacement as speaker. It underlines many of the compromises the NLD has made to gain and maintain power.

Aung San Suu Kyi had two obvious choices to fill the job: the incumbent deputy speaker or the head of the bill committee, which vets all legislation before it is tabled. The deputy speaker would seem the natural pick; but in this case it meant elevating a controversial figure, T Khun Myat, over a party stalwart, Tun Tun Hein.

T Khun Myat’s biography makes for interesting reading. An ethnic Kachin Christian, he is descended from hereditary rulers known as Duwa. He studied law and worked in the government law office until 1988. When that year’s upheaval ended the socialist regime but brought a military junta to power, T Khun Myat found a new, higher calling: from 1990 to 2010, he was concurrently head of the army-allied Kutkai militia in northern Shan State and a senior official in the attorney-general’s office. He also found time to serve on the committee that drafted the 2008 constitution.

In 2010 he won election to the lower house as representative of the military-linked Union Solidarity and Development Party, or USDP. A trusted ally of the speaker, former general Shwe Mann, he was appointed to head the bill committee and by all accounts acquitted himself well. He was a key player in Shwe Mann’s efforts to assert the parliament’s independence from the government.

By the time T Khun Myat was re-elected in November 2015, Shwe Mann had been purged from the party leadership. Shortly after parliament convened in January 2016, T Khun Myat left the USDP to sit as an independent. Whether he resigned or was expelled is unclear.

Not surprisingly, his years leading the Kutkai militia have attracted the most scrutiny. The militia has played a crucial role in maintaining government control over the main highway to China. In return, T Khun Myat was granted business concessions — standard practice in Myanmar, where business and conflict are often intertwined, and loyalty to the military is rewarded financially. This is where things get particularly thorny, though, because it has been alleged that he was embroiled, as leader of the Kutkai militia, in the illicit drug production and trafficking that are rife in conflict-hit Shan State.

For many NLD law-makers — veterans of decades of junta persecution — T Khun Myat represents all that the party fought against. So when they arrived at parliament on 22 March and discovered the party expected them to elect him speaker, they acquiesced only with a sense of deep resentment. Some reportedly took to Facebook to air their concerns.

The decision also reopens a festering wound over Shwe Mann’s influence on the NLD government, and Aung San Suu Kyi in particular. Shwe Mann’s story, like T Khun Myat’s, is complicated. He was appointed speaker after being overlooked for the presidency in favour of another former general, the USDP’s Thein Sein. To recover from this setback, he built up parliament as his own power base, bringing him into regular conflict with the government.

Because the constitution bans members of government from party activities, Shwe Mann was acting leader of the USDP for most of the time Thein Sein was in office. Despite his bloody past crushing armed ethnic groups and his family’s business empire, he was cast as a reformer and tipped as a potential president after Thein Sein. He also created new alliances, notably with Aung San Suu Kyi — ostensibly his rival — after she entered parliament following a by-election in April 2012.

In June 2015 he crossed a line, though, by pushing for constitutional reform against the wishes of Thein Sein and the military commander-in-chief, Min Aung Hlaing. Two months later, during a USDP conference, Thein Sein sent police into the party’s headquarters and Shwe Mann was purged from the party leadership.

Once the NLD won power, Shwe Mann and many of his allies — most of whom are also former generals — were appointed to key roles. Some became ministers; T Khun Myat got the deputy speaker’s job. Shwe Mann was given the task of leading a powerful parliamentary body, the Legal Affairs and Special Cases Assessment Commission. Few people really know what the commission does on a day-to-day basis; its remit is broad, enabling it to review legislation, “assess special issues whenever they arise” and report to the speaker, “accomplish duties assigned by the speaker,” and tender opinions on request.

In this role he has become a confidante of Aung San Suu Kyi, providing advice on ministerial picks, how to handle the military — and, it seems, who should be the next speaker.

Many, though, don’t share Aung San Suu Kyi’s faith in Shwe Mann. He is despised — even considered a traitor — by the military for not following the script while he was speaker, and he is mistrusted by most within the NLD.

Over the past six months, many have drawn attention to Aung San Suu Kyi’s unwillingness to speak out about the human rights violations taking place in Rakhine State. But the continued influence of figures like T Khun Myat and Shwe Mann is a reminder that she has been making compromises since her release from house arrest in November 2010.

Myanmar’s transition was constructed by the generals, but it was strengthened by the grand bargain they engineered with Aung San Suu Kyi in 2011. She accepted their constitution and agreed to play by their rules. As time goes on, it looks increasingly like a Faustian pact.

The first two years of NLD rule have been disappointing for many in Myanmar. Aung San Suu Kyi’s political goals, particularly on the peace process, have been thwarted by the military. The crisis in Rakhine State has damaged — perhaps irrevocably — Myanmar’s relationships with the West, to the advantage of countries like China. The government has struggled to bend the bureaucracy to its will; if anything, the NLD has been co-opted by them, too.

But this shouldn’t be surprising. A transition built on compromises was always going to be messy, complicated and unsettling, particularly after the binary politics of military rule, when “good” and “bad” seemed so easy to define.

That doesn’t mean the government should be let off the hook; there is massive room for improvement. But nor should everything be viewed through the prism of Rakhine State. It is a symptom, not the cause, of the challenges that Myanmar faces.

The appointment of a new president presents the opportunity to reset and deal with the mistakes of the past two years. Progress on Myanmar’s key challenges is likely to be slow and the stain of Rakhine State cannot be erased. But the NLD under president Win Myint has the opportunity to deliver tangible change that benefits millions of people. ●

Thomas Kean is editor-in-chief of Frontier Myanmar. He has worked as a journalist and editor in Yangon since 2008. 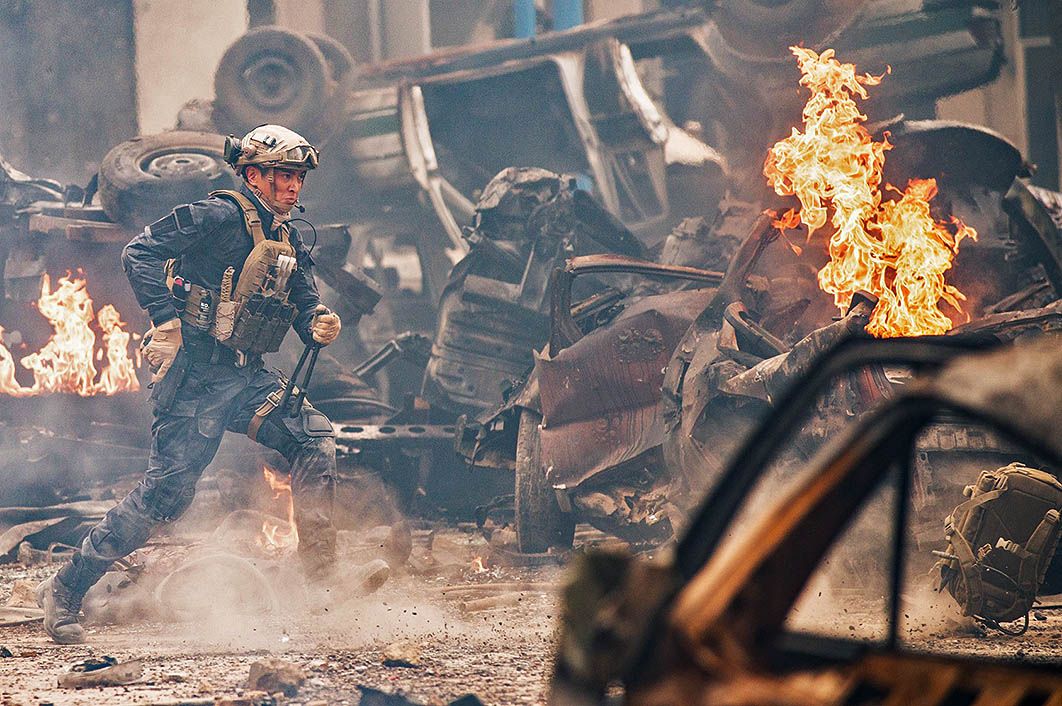