In Paris with the mayor of Byron

Cities, regions and states are setting the pace on climate adaptation, reports Giles Parkinson from Paris 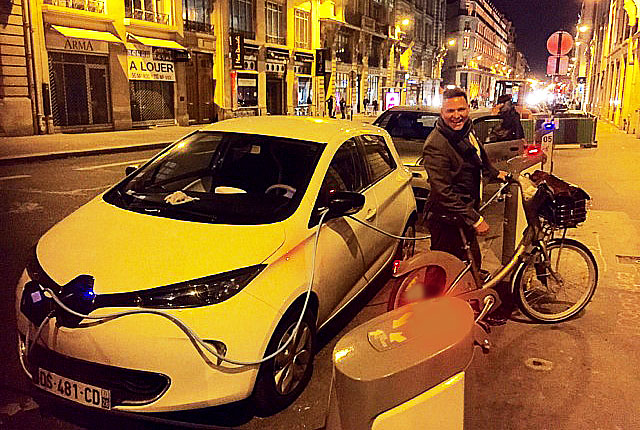 Byron Shire’s Simon Richardson seems high on life, but not in the way some might suspect a Byron mayor might be. Last Saturday I came across him as he sped down the footpath of Rue Réaumur, at the top of the 2nd arrondissement, on a rented bicycle. I had stopped to admire a row of electric vehicles charging near the footpath while they waited for their next share clients. Installations like these are dotted across Paris and that, says Richardson, is what he would like to see in Byron Bay and surrounding towns.

Richardson’s plans don’t end there. Byron shire is working on a project to take the region to zero net emissions within a decade. Amid a flurry of activity in the northern rivers area, a whole range of fascinating possibilities is emerging – the creation of the country’s first community-owned energy utility, for instance, and even the possible buyback of the local electricity network to create a renewable energy–powered micro-grid for the region.

The reason that Richardson is in such a state of excitement is that here in Paris, in and around the climate talks, hundreds of mayors from across the world and dozens of regional and sub-national leaders are speaking the same language.

“It’s fantastic being here learning what others are doing,” he tells me. And in Paris, Richardson notes, it is the sub-national governments – the councils, regions and states that California governor Jerry Brown dubbed the “super nationals” – that are raising the bar on climate action. Unlike national governments, they are actually delivering on the targets needed to respond to the science.

And a surprising number of Australians are among them. Here, too, is the mayor of Adelaide, Martin Haese, who wants his city to be the first major capital to reach carbon neutrality – a target he hopes to reach as early as 2025. He has pioneered a series of battery storage incentives to encourage homes to install devices that could help manage the extraordinary levels of solar power in the local grid.

Sydney lord mayor Clover Moore is in Paris too, pushing her city’s goal of cutting emissions by 70 per cent by 2030, and lamenting the restrictive rules that prevent her team from reaching the goal any earlier.

Simon Corbell, the ACT environment minister who masterminded the territory’s plan to source 100 per cent of its electricity needs from renewable energy by 2025, is also here. Corbell’s program – with its successful reverse auction tenders – has kept the large-scale renewable energy industry alive in Australia virtually single-handedly, while federal fiddling with the renewable energy target brought the sector to a virtual halt.

And here, too, is SA premier Jay Weatherill, who is heading a twenty-strong delegation promoting that state’s plan to attract $10 billion in clean energy investment over the next decade and achieve net zero emissions by 2050. South Australia, he says, will reach its 50 per cent renewable energy target next year, nearly a decade ahead of schedule. He intends to chart a course to bring the state as close as possible to 100 per cent renewables.

It’s an extraordinary target that puts the state at the cutting edge of clean energy innovation. It carries some risks, but could bring huge rewards. Weatherill wants the state to be an innovator in energy storage and at the forefront of electric vehicle adoption and driverless car technologies – know-how he is convinced the state will be able to export. He would like an electric vehicle manufacturer to set up operations in the state as it waves goodbye to the makers of internal combustion engine cars in 2017.

Weatherill’s ambition to achieve zero net emissions seems radical in a country still wedded to fossil fuels and dependent on coal as the major source of electricity. Next March, however, South Australia will join Tasmania (already near as dammit to 100 per cent renewables) and the Australian Capital Territory (getting there within ten years) in being free of coal-fired power stations.

All this is evidence of a disconnect between the ambitions of local, regional and state governments like Byron Bay, the Australian Capital Territory and South Australia, and that of the national government in Australia. And the pattern is being repeated across the world – in Europe, the United States, Canada and elsewhere.

Corbell says that one of the key reasons the Australian Capital Territory has been able to be so ambitious is the absence of a significant fossil fuel lobby in his territory. In other states, he says, ambition has been hampered by “fear and ignorance” driven by “vested interests who don’t want to change the way the energy system operates.” These vested interests, Corbell says, are “aided and abetted by politicians who are not prepared to imagine the different future. We need more people to imagine and demonstrate that a different future is possible and it is affordable.”

California governor Jerry Brown expanded a little on those opponents in a conference with Weatherill in Paris on Monday. They are, he said, businesses and politicians who fail to imagine anything other than past practices. This failure of imagination perhaps best explains the disconnect between state and regional governments and Australia’s federal Coalition government, and between the Coalition’s own rhetoric and actions. For all that Malcolm Turnbull would like “innovation” to be the buzzword associated with his government, it is all but absent from where it is needed most – in the transition to a decarbonised economy, possibly as early as 2050.

Last week in Paris, environment minister Greg Hunt highlighted how the Turnbull government is dealing with the climate targets it is bringing to Paris. For the government, it is essentially an accounting issue, one in which Australia can use a favourable deal in Kyoto way back in 1997 to help reach modest targets for 2020 and 2030. Australia, Hunt insisted, will meet its 2020 target of a 5 per cent cut in emissions from 2000 levels with ease.

And even though five European countries have decided to tear up their surplus credits, amounting to more than 620 million tonnes of CO2 [subscript 2] equivalent (or more than Australia’s annual output), Australia has no intention of doing the same with its surplus of 128 million tonnes.

“The important thing is for Australia to meet its targets,” Hunt said. And it appears that it will do so without even having to reduce its level of industrial emissions. Indeed, for nearly every tonne of abatement the government is buying – at the average price of around $13 per tonne, it says proudly – another tonne of CO2 [subscript] equivalent is being emitted by the electricity sector alone, as the brown and black coal-fired generators reassert their dominance over the energy mix in the absence of a carbon price.

Yet, at the same time, Australia is supporting a target of “well below 2°C,” and even a reference to a tighter target of 1.5°C, without having any long-term policies to meet those targets. (They were dumped with the removal of the carbon price.) The minister didn’t blink when asked about this after arriving in Paris for the final week of the talks. “Ours is a 2030 target,” he said.

This disconnect is extended through to other policy levers. The government is focused on innovation, yet it refuses to ditch legislation that would abolish the very agencies that could deliver it – the Australian Renewable Energy Agency and the Clean Energy Finance Corporation.

The Greens are the only party that seems to understand that this is any sort of problem. They have sent both energy spokesperson Larissa Walters and leader Richard Di Natale to Paris, and must be rejoicing that the sort of policies they advocate are not deemed radical here, as they are in the Australian press, but part of the mainstream of the conversation going on in Paris.

“The transition to the clean energy economy is happening,” Waters says. “The transition is on, and my hope is that the government stops putting its head in the sand and accepts that there is a transition.” •