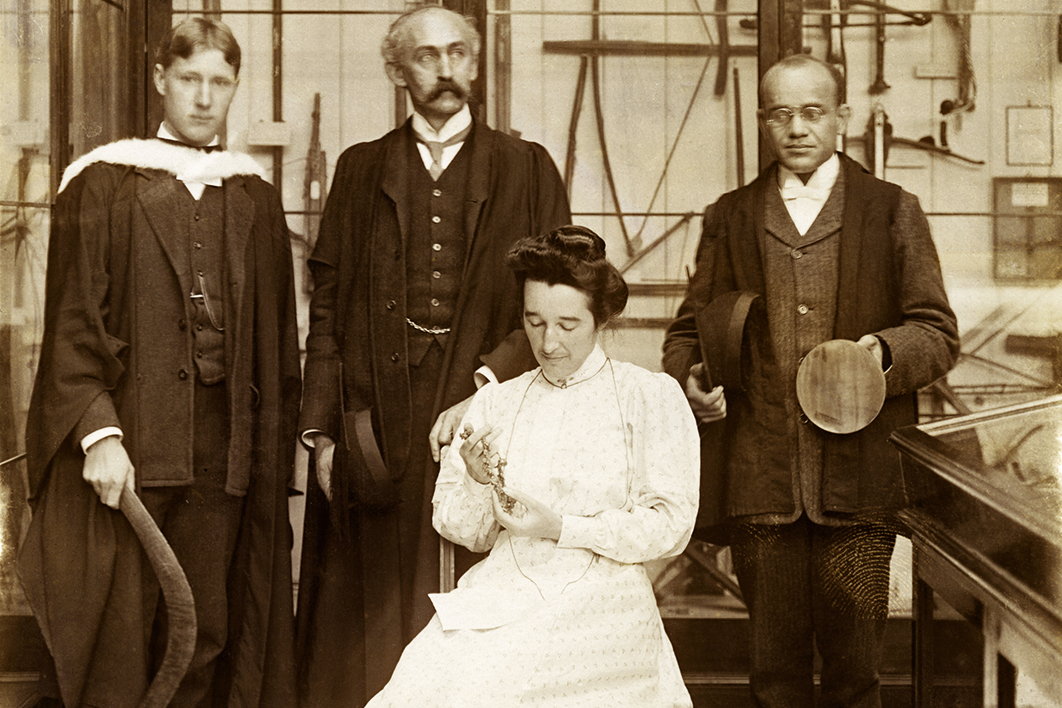 “Find an island somewhere in the Pacific with the least possible amount of contact with white people and go and live in it.” This was Beatrice Blackwood’s wry recollection of the advice she received at Oxford prior to embarking on anthropological fieldwork in 1929. It’s a far cry from field research today, which would involve completing at least one postgraduate course in research methodology, presenting a research proposal, assembling a comprehensive literature review, and then the trial by fire ­— a detailed proposal for the university ethics committee.

Of the five women Frances Larson writes about, all of whom studied anthropology at Oxford in the first three decades of the twentieth century, only Blackwood, the youngest, emerged more or less unscathed from the struggle to become a scholar in a man’s world. Where her four predecessors — Barbara Freire-Marreco, Katherine Routledge, Maria Czaplicka and Winifred Blackman — faced opposition, discrimination and hardship, she was able to forge an academic career and gain considerable recognition.

Freire-Marreco, Routledge, Czaplicka and Blackman were adventurous optimists. Having found remote places in which to conduct their fieldwork, each lived among people whose languages, social arrangements and cultures were alien to them. They wrote articles and books and gave lectures to learned societies, but they never received the recognition or the academic employment of their male counterparts.

Anthropology was construed at the time as “salvage ethnography.” Its practitioners observed customs, collected artefacts and provided accounts of how they believed indigenous people had lived before the disease, dispossession and death spread by colonial intrusion. In the belief that racial differences existed, they measured bodies and made detailed descriptions of physical features ­— stature, hair type, skin colour — deemed to be racially specific.

Having gained a distinction for her diploma of anthropology, Barbara Freire-Marreco was awarded a research fellowship at Oxford in 1909 and went to New Mexico to live with and study a Pueblo Native American community. She came from a supportive and relatively wealthy family. Originally intent on spending time among “real savages,” she settled into life in the less daunting Santa Clara Pueblo, a reservation established by US president Theodore Roosevelt in 1905.

Missionisation, the loss of control over land and forced school attendance for children had already transformed their culture, but members of the community continued to perform traditional rituals and, in secret, tried to maintain cultural integrity. Freire-Marreco learned the language, immersed herself in daily life and effectively engaged in what came to be called “participant observation.” Although she published articles based on her research, she lacked confidence in her skills as an ethnographer and was painfully aware of the gaps in her knowledge.

Maria Czaplicka came to Oxford from Poland intent on making a career as an anthropologist. She was brilliant, volatile and tenacious. With no family wealth to fall back on, she needed a salaried position once she had completed her diploma, and none was available to her. Her mentor, Professor Robert Marett, and the head of Somerville College, Emily Penrose, managed to scrape together enough funding for her to work on a book, Aboriginal Siberia: A Study in Social Anthropology, that drew together all available Russian and Slavic texts. Frances Larson calls it “a triumph of translation and synthesis.”

Czaplicka was determined to undertake fieldwork in central Siberia in 1914 and began organising an expedition. Her team comprised two women — one an ornithologist, the other an artist — and an American man, Henry Hall. It’s possible Hall was her lover, but he remains a shadowy figure who was apparently ineffectual as a researcher. The field trip must surely constitute one of the harshest and most hazardous in the history of anthropology: Czaplicka contended with blizzards, near starvation, illness and freezing temperatures. Her stamina and determination were extraordinary. Her return to Oxford coincided with the outbreak of the Great War and she began working in Oxford’s Pitt Rivers Museum while taking on civilian wartime duties.

Katherine Routledge is a more conventional subject. She was wealthy, accustomed to getting her own way and unencumbered by qualms about the advantages deriving from her position in a colonial state. Her interest in anthropology was piqued by her encounter with Kikuyu people in British East Africa, where her husband had acquired a large property. Together they wrote a book, With a Prehistoric People: The Akikuyu of British East Africa, which revealed how her gender gave her access to women’s lives and enriched her ethnography.

Routledge’s wealth allowed her to develop her anthropological interests further afield. She had a boat built, hired crew and went with her husband to Easter Island and later to Mangareva, where she studied the people and their artefacts. She produced a book, The Mystery of Easter Island, and gave lectures on her research.

After studying anthropology, Winifred Blackman became an assistant at the Pitt Rivers Museum, cataloguing artefacts. She was inspired to work in Egypt by her brother Aylward, an archaeologist who held an academic position at Oxford. After seven years earning an income to support her widowed mother and younger siblings, she was able to join him on a dig, and so began her passionate interest in the lives of Egyptian peasants. She undertook nineteen field trips, learned Arabic, lived with local people and shared their daily lives. But although she published The Fellahin of Upper Egypt as well as numerous articles, she struggled to find funding for her research trips, relying on payment for collecting items for the pharmaceutical tycoon, Sir Henry Wellcome, and minor grants.

Beatrice Blackwood met Maria Czaplicka in 1912, their friendship blossoming when Blackwood began to assist Czaplicka in preparing her book. Blackwood enrolled in the diploma course in 1916 and embarked on a career in museum anthropology. During the first world war, when women took on jobs that had previously been exclusively male, Blackman, Czaplicka and Blackwood found employment and encouragement from senior academic men, but only Blackwood established a stable career.

Unlike her predecessors, Blackwood was also able to take out a degree. Women had been allowed to attend lectures and sit exams before 1920, but were unable to formally graduate. But once they were granted the vote in 1918, attitudes changed. Blackwood also studied anthropology at a time when the discipline’s theories of cultural evolution were being eclipsed by new, scientific approaches. Bronislaw Malinowski, an exact contemporary and friend of Czaplicka, was at the London School of Economics teaching his version of functionalism and insisting that long-term participant observation was anthropology’s primary research methodology.

This new approach had a profound effect on Blackwood’s fieldwork. She wanted to follow Malinowski’s lead by studying a “stone age” society “untouched” by the presence of colonial administrators, missionaries, white settlers and traders. But although his publications had given the impression that his fieldwork in the Trobriand Islands enabled him to describe the culture and social order as it existed prior to European intrusion, a mission, a resident magistrate and pearl trader were already settled there.

During her three research trips to Melanesia between 1929 and 1938, Blackwood chafed at the constraints imposed by the government anthropologist and director of native affairs, Edward Chinnery. He was concerned about her personal safety and clearly didn’t think that a woman should embark on fieldwork in communities that were very far from direct administrative control. While her book Both Sides of the Buka Passage, based on her fieldwork in the Solomon Islands, testifies to her precise, diligent fieldwork, she was dissatisfied with her achievements as a scholar. She held the position of assistant curator at the Pitt Rivers Museum until her retirement.

Undreamed Shores is not only biographical; it is also a history of women’s education in anthropology in England during the early twentieth century. Faced with opposition from parents and family, condescending patrons and institutions blighting their careers, Larson’s five subjects had to depend on male patronage and support. Their heroism in the face of patronising and demeaning attitudes from men was extraordinary. They wrote learned articles and books, gave lectures and taught, but never gained the sorts of recognition and career security accorded their male peers.

The price could be very high. Maria Czaplicka committed suicide after her application for a fellowship was rejected — the recipient being a young man with no degree and no training in anthropology. Katherine Routledge and Winifred Blackman spent the last years of their lives in mental hospitals, their tragedies only slightly tempered by the fates of the two other heroines. Barbara Freire-Marreco turned down the opportunity of an academic position in America to support her husband’s career, first in England, then in Spain. Beatrice Blackwood abandoned her hopes of further fieldwork and appeared satisfied with her conscientious curatorial work at the Pitt Rivers Museum.

These were the pioneers whose struggles enabled the women of future generations to follow their passions, work in inhospitable environments and find fulfilment in academic careers. Indeed, by the second half of the last century, the discipline was remarkable for the number of women — Margaret Mead, Phyllis Kaberry, Mary Douglas, Lucy Mair and, more recently, Marilyn Strathern — who not only became professors in prestigious universities but are also still acknowledged as major theorists.

Frances Larson’s meticulously researched book draws on a wide range of archival material, as well as the artefact collections and publications of the five anthropologists, to capture the women’s strength and tenacity. Like their contemporary male counterparts’ endeavours, their work was multidisciplinary, blending interests in physical ethnology, archaeology, folklore and collecting for museums, and informed by a theoretical eclecticism and social evolutionism that was already being eclipsed by social anthropology. But this book makes clear that they were all consummate fieldworkers who “dared to navigate the edges of society and push at the boundaries of what it meant to be a woman.” •

Martha Macintyre is an Honorary Principal Fellow in the School of Social and Political Sciences at the University of Melbourne.

The rubble of the Yazegi residential building in Gaza City on Sunday. Adel Hana/AP Photo 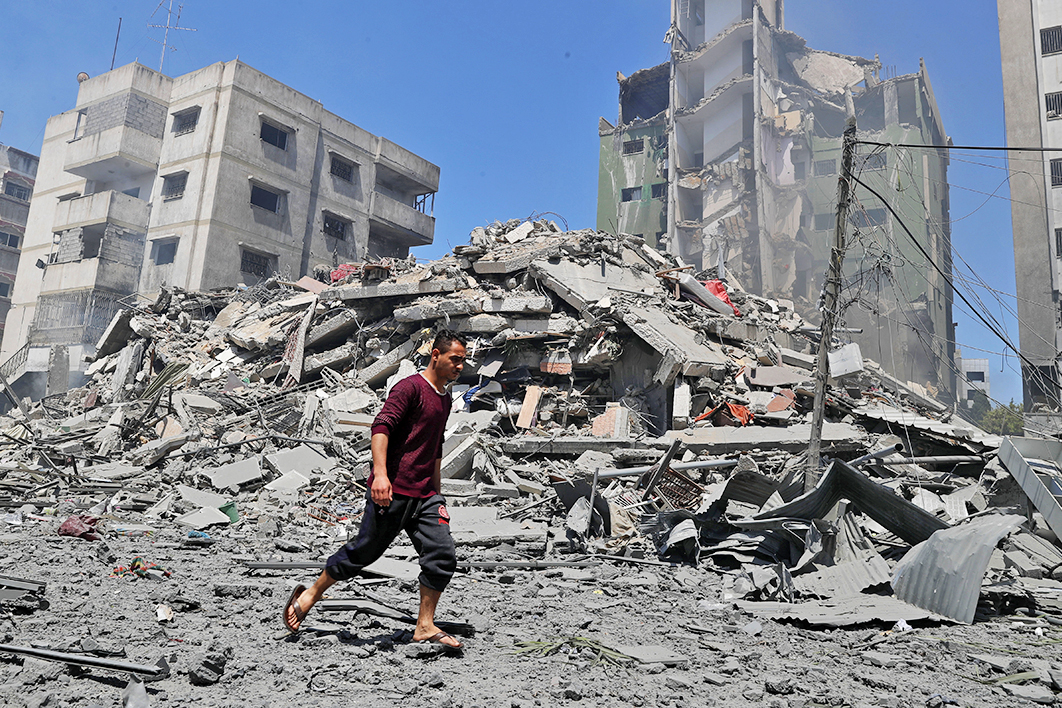 The rubble of the Yazegi residential building in Gaza City on Sunday. Adel Hana/AP Photo