Iran, Trump and the art of deal-breaking

White House decisions are making life harder for America’s allies, and not just in the Middle East 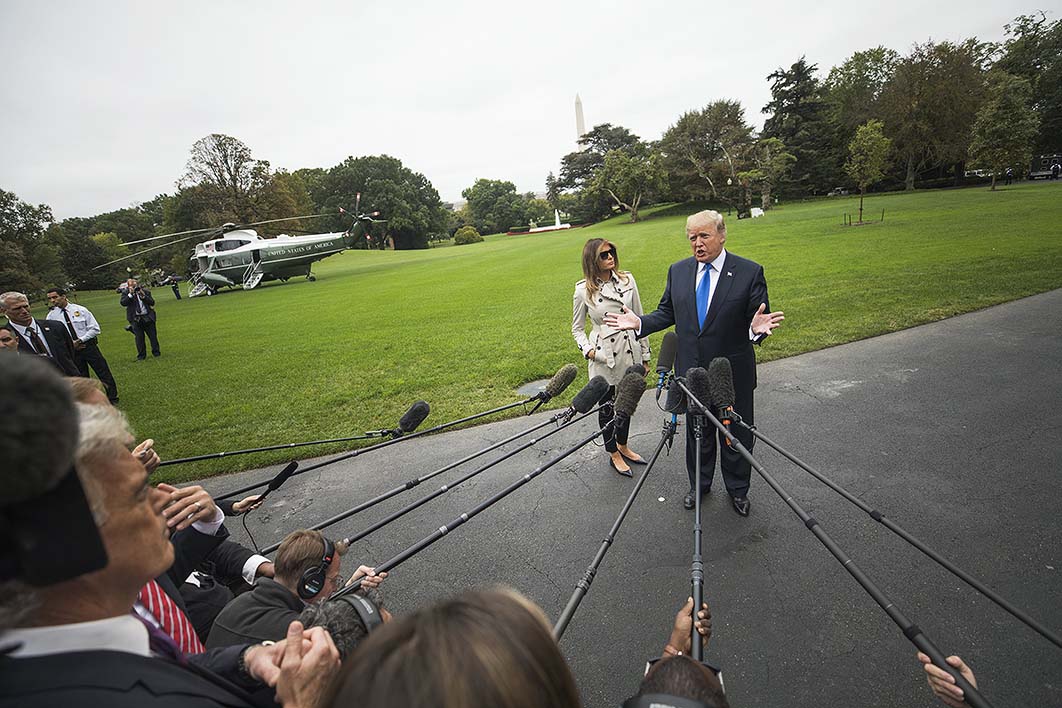 For once Donald Trump appears to have been as good as his word, acting to bring into question the continued US commitment to the Iran nuclear deal. In a press briefing, ominously on Friday 13 October, Trump declared that “based on the factual record” he could not and would not certify, as required by US legislation, that the lifting of US sanctions on Iran was “appropriate and proportionate.” The lifting of the sanctions is part of the 2015 Joint Comprehensive Plan of Action, or JCPOA, to contain Iran’s nuclear program.

Does that mean the Iran deal is finished? No. He is directing his administration to “work closely with Congress and our allies to address the deal’s many serious flaws so that the Iranian regime can never threaten the world with nuclear weapons.” And if a solution is not reached with Congress and the allies? Simple: “then the agreement will be terminated… our participation can be cancelled by me, as president, at any time.”

Nothing could be less clear. This formulation puts the responsibility for a solution on Congress and on America’s “allies.” Iran is not considered a party to this elaboration of the JCPOA. The allies have made their views known: while they might agree with many of the other issues of concern to President Trump, they want first and foremost to preserve the deal on Iran’s nuclear program. Even Australia has been willing to publicly defend the agreement.

As rightly pointed out by Iran and other parties to the deal — the five permanent members of the UN Security Council (China, France, Russia, Britain and the United States) plus Germany and the European Union — the JCPOA is a multilateral agreement and no one party can unilaterally end it. That said, it is hard to imagine the deal surviving a head-on US attack.

The certification requirement was a gesture to a sceptical Congress enabling Barack Obama to lift sanctions on Iran as part of the nuclear deal. The implied threat now is that sanctions could be reintroduced.

The “factual record” underlying Trump’s policy was set out in a four-page White House statement on the same day — titled President Donald J. Trump’s New Strategy on Iran. The strategy is described as having been arrived at in consultation with Trump’s national security team and after “nine months of deliberation with Congress and our allies on how best to protect American security.” I wonder if Australia and other allies feel comfortable being so implicated?

As laid out by Trump, the record has frightening parallels with the gilded and airbrushed arguments used to justify the invasion of Iraq. Trump describes the Iranian government as being a fanatical, radical dictatorship “with a long campaign of bloodshed,” indeed a “murderous past and present” — but stops short of calling for regime change. The new strategy recounts historical attacks by Iran on US interests in Iran and elsewhere (which are indeed shocking) and itemises other antisocial behaviours: its development of missiles, promotion of terrorism and harbouring of terrorists, support for Syria’s president Bashar al-Assad, hostility to Israel, threatening of shipping in the Persian Gulf, cyber-attacks against the US and Israel and other allies, human rights abuses, and arbitrary detention of foreigners.

THE SPIRIT OF THE DEAL

The Iran deal did not seek to solve all issues of the Middle East. It focused on the very clear and present danger that Iran was about to achieve a nuclear weapons capability. The White House is now asserting that Iran is not observing the “spirit of the deal,” which was to contribute to “regional and international peace and security.” Instead, according to President Trump, Iran is posing an increasing menace to the international community.

What is to be done? The US will work with allies to address Iran’s malign behaviour in four ways:

• Address Iran’s “asymmetric” missile weapons program: but there is no explanation as to how this will be achieved.

• Deny the regime all paths to a nuclear weapon.

Worryingly, except for the fourth issue. we are given no clue as to how the success of these far-reaching ambitions will be measured.

ALL PATHS TO A NUCLEAR WEAPON

Apart from accusing Iran of being in breach of the spirit of the deal, the White House is charging Iran with specific failings.

First, President Trump’s speech, but curiously not the Iran Strategy, accuses Iran of committing “multiple” violations of the deal, for example on the two occasions when it exceeded limits on its holdings of heavy water. But the International Atomic Energy Agency, or IAEA, the international body entrusted to verify the deal, does not consider that the discrepancy amounted to a material breach and has confirmed that holdings are now below the agreed level. What the president fails to acknowledge is that the IAEA is implementing in Iran the world’s most robust nuclear verification regime, with an inspection effort more than double that deployed before the deal (and with the US meeting much of the cost of this extra effort).

A second charge is that Iran has been exploiting loopholes in the deal — but no detail is provided (perhaps Trump is obviously pointing to the fact that the agreement does not address Iran’s missile program).

Third is the vexed issue of access to military sites in Iran, which the US argues might provide insights into Iran’s progress in developing a nuclear weapon. Iranian officials have aggravated the debate by suggesting that international inspectors would never be permitted into military facilities, which Trump depicts as intimidation of the IAEA. The deal does allow for such access, and IAEA director-general Yukiya Amano has confirmed that he would seek it were there to be a need — but in a clear rebuff to the United States, he said he would not authorise a “fishing expedition,” and has confirmed that the IAEA had been granted access to “all locations that it has needed to visit.”

The fourth issue: what happens after the current deal runs out? This is a critical concern to all parties to the deal. In 2015, buying time was the immediate goal. No one disagrees that the biggest challenge ahead will be to close all paths to an Iranian nuclear weapon, and the United States and its partners should be directing maximum attention to engaging Iran on that issue. This requires negotiations for the period after the deal, not walking away from the deal.

THE FOG OF WHITE HOUSE POLICY-MAKING

Much of Friday’s speech was directed at the domestic American audience. The Obama administration was attacked for its failure to conclude a better deal and for numerous other foreign policy mistakes. A foreign policy distraction temporarily diverts attention from the administration’s many woes.

But the president’s tendentious assertions, relentless bombast and threats do not enhance US standing. The Iran nuclear deal is imperfect and its sunset provisions need attention: there is an urgent need for global leadership, but instead the president has passed the parcel back to Congress and unnamed “allies.”

US allies in the Middle East, the Gulf states and Israel will take comfort from the assertive anti-Iranian stance. But key allies in Europe and North Asia must be horrified by the president’s implications that they have somehow endorsed the new US strategy on Iran. To add insult to injury, Trump also appears unhappy that some countries have taken advantage of the economic openings in Iran and hints at dire consequences for any that might engage with the Revolutionary Guard, now a major player in the Iranian economy. The US only has itself to blame for failing to seize these opportunities.

The fog surrounding White House decision-making is creating a more dangerous environment for policy-makers around the world. It is becoming increasingly difficult to paper over the gaps between the interests of key US allies. We insist we stand for strengthening a rules-based international order, yet freely negotiated agreements between states are trashed before our eyes.

A final thought for our region. Some sixty eminent experts from the Asia-Pacific Leadership Network for Nuclear Non-Proliferation and Disarmament recently issued an appeal to the US to respect the Iran nuclear agreement. They argued that abandoning the deal would cast doubt on the integrity of the global nuclear monitoring system of the IAEA, which has assessed that Iran remains compliant. It would also threaten the viability of the multilaterally negotiated JCPOA, and reopen a pathway to an Iranian nuclear weapon. The cascading effect would further deepen the East Asian nuclear crisis, raising doubts about the commitment of the US administration to any international negotiations to resolve the North Korean nuclear crisis peacefully. This would benefit Pyongyang and damage the East Asian non-nuclear weapon states. The logic of these experts is compelling. •

John Tilemann is a former Australian diplomat and international civil servant. He is currently a member and Research Director of the Asia-Pacific Leadership Network for Nuclear Non-Proliferation and Disarmament, based at the Australian National University.