Is China’s claim to Taiwan approaching its end game?

And what would that mean for Australia? 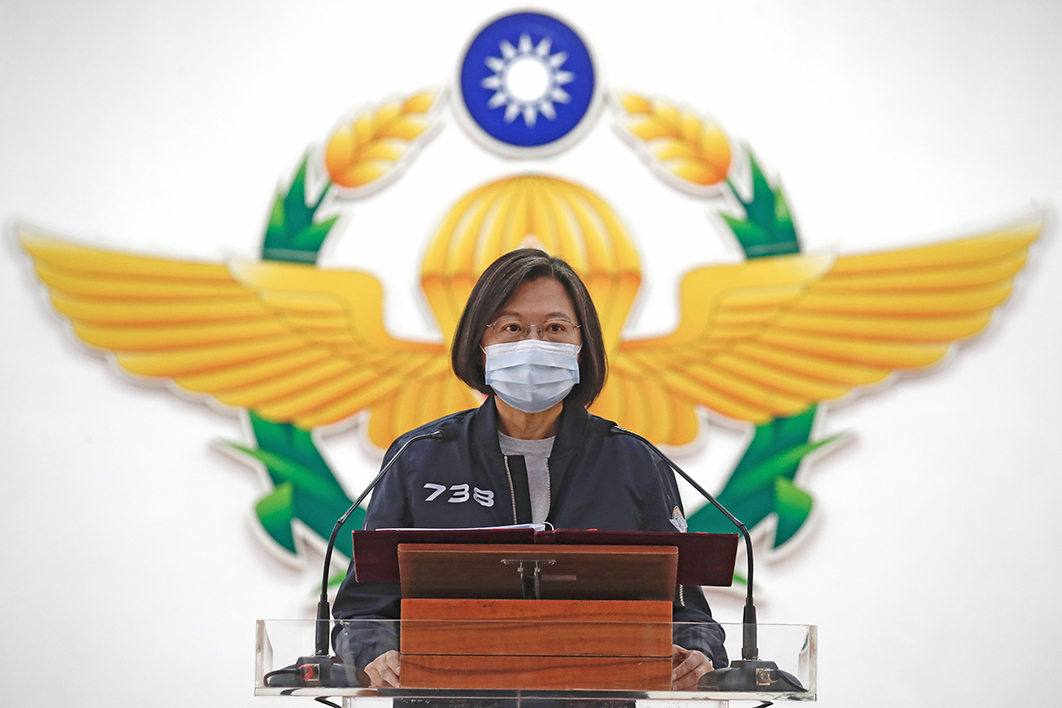 Testbed: Taiwan’s president Tsai Ing-wen during a visit to one of her country’s military bases in January this year. Ritchie Tongo/EPA

China’s probes keep coming. On Monday it was a four-engine reconnaissance aircraft flying only thirty metres above the sea, testing whether it could evade radar detection. The flight was just the latest in a score of thrusts towards Taiwan by Chinese warplanes this month.

Four days earlier, Chinese president Xi Jinping visited a naval base on Hainan island for the commissioning of three new warships, including a giant amphibious landing vessel capable of putting hundreds of marines ashore by helicopter and hovercraft. Two more are under construction, and Chinese media listed Taiwan among their potential targets.

Here in Australia, Michael Pezzullo, the powerful secretary of the home affairs department — a man given to dark warnings — spoke on Anzac Day about the “drums of war” beating louder, declaring the need to avoid the mistakes of the 1930s by arming to deter aggressors.

In Canberra’s political, official and media circles, Taiwan is suddenly a big strategic question. Will China use force to gain control of the island of twenty-four million people it claims as ancestral territory? If so, when? How far will the United States go to defend it? And if Joe Biden is drawn into a war over Taiwan, will Australia be fighting alongside him?

Answering the last question is possibly the easiest for many of our most seasoned officials. “There’s absolutely no doubt that if the Americans were to go to war over Taiwan we would be in it,” says John McCarthy, a former Australian envoy to the United States, Japan, Indonesia and India.

“Australia is not a major player,” Cavan Hogue, a former ambassador to Russia, South Korea and the Philippines, tells me. “But if the Americans decided to defend Taiwan they would expect us to join in — or at least offer our flag even if the military contribution were minimal.”

The Americans would be hoping for a fair bit more than that, says Scott Harold, a senior China analyst with the RAND Corporation think tank in Washington. “US policymakers would be expecting, at a minimum, intelligence support, political-diplomatic support, probably facilities access of some sort,” he tells me, adding it would not be surprising if Washington also expected some “niche” capabilities, such as special forces, anti-submarine operations and air and surface ship deployments.

The Australian Defence Force has spent decades working up the capability to join in such an operation. The navy operates three Aegis destroyers that can be networked into a theatre air-and-missile defence system. Its submarines have American combat systems and weapons. Its two landing ships can each carry a battalion of troops to take back islands. The air force flies American F-35, P-8 and Wedgetail aircraft. All three services have senior officers rotating through US command positions. Seamless “interoperability” with US forces is the doctrine.

It would be hard for Canberra to decline. “If we lost a war against China over Taiwan and Taiwan was forcibly absorbed, and our allies stood on the sidelines,” says RAND Corp’s Harold, “then it’s quite clear that would be the end of the liberal international order in the Indo-Pacific, and quite possibly worldwide.”

Even if the United States did fight off a Chinese assault on Taiwan without visible help from Australia, it would mean the effective end of the ANZUS alliance, according to Australian strategic thinker Paul Dibb.

Only in recent years has a war of this kind become a contingency that the United States and its allies needed to worry much about. In the early decades after nationalist general Chiang Kai-shek fled to Taiwan with the remnants of his Kuomintang forces in 1949, it became something of a pariah state. Washington transferred its recognition to Beijing in 1979, leaving the Chinese nationalist regime in Taiwan in a kind of diplomatic limbo. American defence assistance was promised only so long as the Taiwanese didn’t start a fight with China or provoke one by declaring independence.

But circumstances began changing after Chiang’s son ended martial law and his successor, a native of Taiwan, opened up contested elections. Since then, government has alternated between the Kuomintang and the Democratic Progressive Party, which promotes a Taiwanese identity and has veered close to outright separatism.

Under president Tsai Ing-wen, the DPP has held power since 2016. Elections, a female leader, and liberal social policies have made it a successful testbed for Chinese democracy. Its handling of Covid-19, a danger it recognised before Beijing sounded the alarm, has added to its kudos. The transformation has weakened the argument, still held in some quarters, that Western powers and Japan, with their records of meddling and exploitation, should stand back and let two not-entirely-admirable Chinese regimes settle their differences.

Rather than the convergence many expected in the 1970s, the democratic transition set Taiwan on a path of political divergence from the communist mainland. The gap has widened, especially since Xi became China’s leader, tightening internal political and ideological control, promoting an expansion of China’s global influence, and crushing hopes of autonomy in Tibet, Xinjiang and Hong Kong. He has raised the recovery of Taiwan to a sacred goal and has devoted huge budgets to converting the People’s Liberation Army into a high-tech force that can contest American control of nearby seas.

Xi’s deadline for taking back Taiwan is unknown. It is unlikely to be the hundredth anniversary of the Communist Party of China in June this year — the preparations would have been apparent to US satellites. Xi himself has set 2035 as a target for some of his other plans.

In recent weeks, US Pacific fleet commanders have signalled to Washington their concern about a window of vulnerability within the next five or six years, before their own modernisation programs take effect. Scott Harold points out that America is responding to China’s growing power by dispersing its forces from bases vulnerable to Chinese strikes. It could be seen as a window of opportunity closing for PLA commanders.

Would Xi risk an all-out attack on Taiwan? It would almost certainly involve missile strikes on US bases in Japan, drawing Japan into the conflict by triggering the carefully drawn provisions about self-defence in its constitution. PLA generals talk about using nuclear weapons, which would invite retaliation in kind, shattering the carefully built-up economy and perhaps the party’s domestic grip.

“Would a communist regime really put those equities at risk when Xi Jinping knows that as long as I don’t do something incredibly stupid, I’ll still be the effective emperor of China tomorrow?” asks Harold. But hidden power plays within the Chinese Communist Party could work a different logic: “Xi could be pushed to be more hawkish than anyone else.”

Mark Harrison, a China specialist at the University of Tasmania with a deep knowledge of Taiwan, thinks all-out invasion is highly unlikely. China’s leaders know that seizing the island would be just the start, involving an occupation force of hundreds of thousands of troops who would be vulnerable to blockade. “It’s a crisis that would go on forever, and be incredibly testing of the PLA and China’s military infrastructure,” he says.

“Australia would be involved” in such a large-scale scenario, says Harrison. “But China is more likely to act in a way that makes it much more equivocal for the US and its allies, including the Taiwanese, about their best response. What we’re much more likely to face is a smaller event where you don’t have a clear choice. And Beijing will seek to use that to its tactical advantage.”

Smaller operations could include grabs for the Taiwan-held islands on the Fujian coast — islands like Kinmen, which the nationalists held against attack in the 1950s, or the remote Pratas islands in the South China Sea.

“It’s almost a version of grey-zone coercion,” says Harold, referring to China’s use of swarms of fishing boats and coastguard vessels to push its maritime claims. “A little bit beyond that because it’s actually occupying territory and kills a limited number of Taiwanese people. That’s a pretty serious threat, and to not respond to it would feel a bit like the militarisation of the Sudetenland” — Hitler’s occupation of German-speaking parts of Czechoslovakia in 1938.

“There would be some people saying it’s either this or we fight the big war, and are we going to fight the big war over this small thing?” Harold adds. “The reality is that’s how status quo powers get manipulated by aggressive, risk-accepting, risk-manipulative rising powers.”

Since taking office, US president Joe Biden drawn Washington back behind the Chinese “red lines” that Donald Trump trampled all over when he sent high-ranking officials to Taiwan. But his secretary of state, Antony Blinken, has declared “rock-solid” support for Taiwan, and supplies of missiles, extra F-16 fighters and other advanced munitions continue. When Biden met with Japan’s Yoshihide Suga the two leaders reiterated their support for “peace and security” in the Taiwan Strait — a coded signal that alarmed Beijing.

“In a sense,” says Harold, “this is in some ways more threatening because it suggests the US is returning to a recognition that it needs to be an active leader, not necessarily the only one but certainly the most capable one among others. If you look at the calculations of Tokyo and Canberra, clearly those are much more closely aligned with trying to respond to and support Taipei’s continued de facto independence from Beijing.”

Taiwan itself has been angling for more explicit support from Canberra, notably during a long interview with foreign minister Joseph Wu on the ABC last year. Some analysts see a division between Australia’s defence and foreign affairs departments. But foreign affairs secretary Frances Adamson, who has served in Beijing and Taipei, told a Senate estimates inquiry that Canberra had made several representations to China about Taiwan recently. Nor are defence secretary Greg Moriarty or his deputy secretary for strategy Peter Tesch — both former ambassadors — noticeably pushing for change. ADF chief General Angus Campbell says a conflict over Taiwan would be “disastrous.”

Australia’s official position is still strictly “one China” — that Taiwan is part of China — while urging that reunification happens by consent, which is now a forlorn prospect. Yet reports do suggest that the defence department is updating its scenarios for Taiwan to include some major military assets. ANU strategic expert Brendan Taylor sees this move as a response to pressure from Washington for Canberra and Tokyo to add their weight to American deterrence.

“Because of the capabilities that the Chinese have been developing it’s going to become more and more difficult for the Americans to come to Taiwan’s defence in the way they were able to, not without cost but relatively easily in the past,” says Taylor.

Harrison, at the University of Tasmania, sees no likelihood of an upgrade in relations with Taiwan. “There is a view in certain quarters that Australia is particularly belligerent towards China, but that really isn’t the case,” he says. “In really significant areas — Hong Kong, Taiwan, Xinjiang — Australia’s actually been very reticent.”

Canberra’s loudest drumbeat of war comes from the Australian Strategic Policy Institute, whose dire scenarios are lapped up by the media and some politicians. “The place is getting a lot hotter under the collar than it should,” complains former ambassador McCarthy. “Everybody is whipping everybody else up.” • 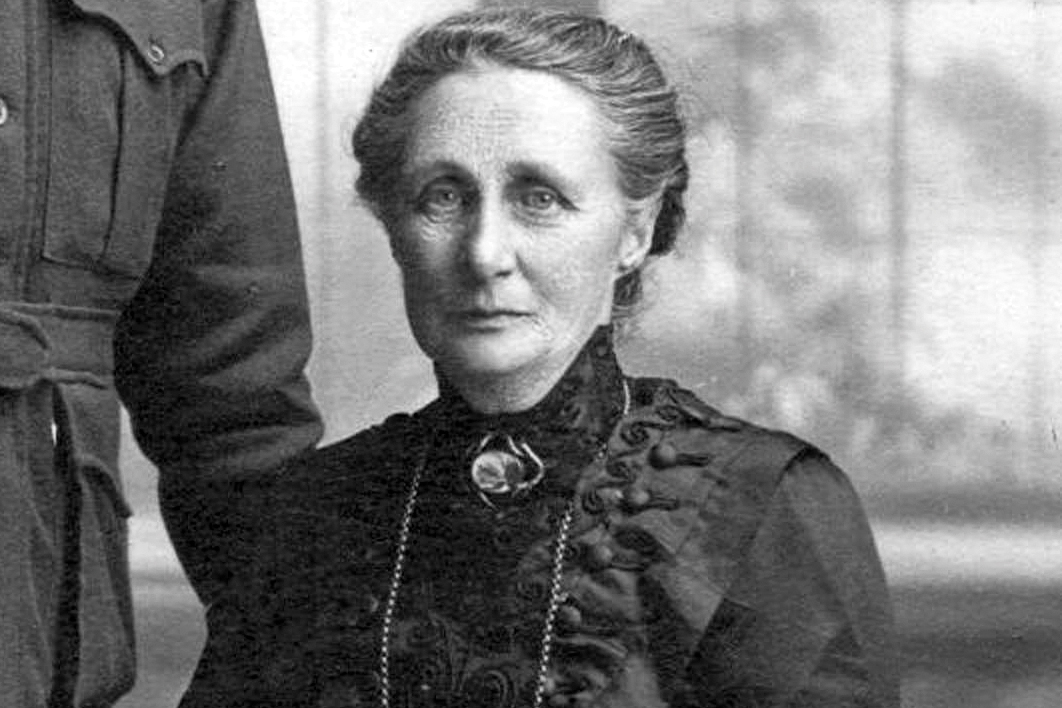