Is this a great American realignment? 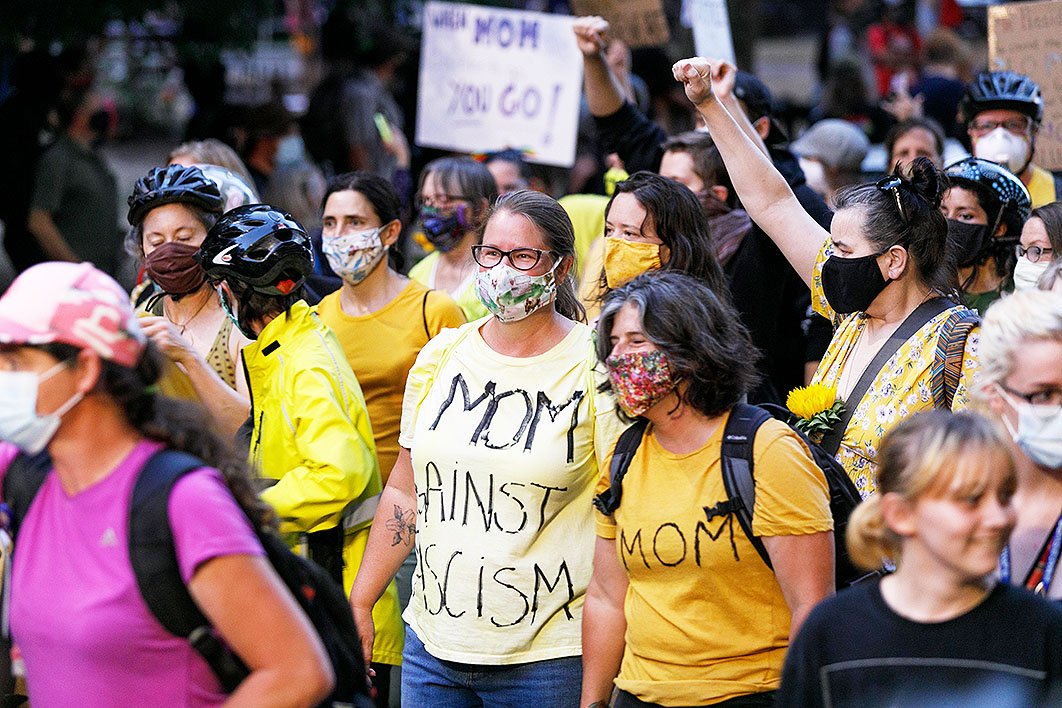 Game-changer? “Moms” join in a protest against police brutality and racial inequalities outside the Federal Courthouse in Portland, Oregon, on Sunday. John Rudoff/Sipa US

What’s wrong with America? It’s a question that has been posed over and over again in recent years. American commentators on the centre left have typically traced the rot to problematic features of American conservatism, telling us, for example, that the right has gone wrong (E. J. Dionne Jr), that conservative plutocrats have hijacked the system (Jane Mayer) and that Republicans have bamboozled the American heartland (Thomas Frank).

Ezra Klein takes a different tack. In Why We’re Polarized, the liberal journalist rides a wave of books that have fixed on the “p word” as the key to understanding political dysfunction in the United States. Polarisation, for these pundits, simply means a widening gap between right and left, but it’s a gap with destructive consequences. It’s not the vigorous contestation of ideas and values among people who disagree — the essence of politics. It’s a toxic defect.

It’s no surprise that this concept, which has been lurking around since the 1980s, came to prominence after the Democratic Party’s devastating defeat in 2016 made a reckoning with the failures of progressive politics impossible to avoid. At its worst, the polarisation thesis devolves into a both-sidesism that, in laying blame everywhere, fixes it nowhere. Klein’s book tilts heavily towards both-sidesism until its final sections, when he acknowledges that Republicans have become far more extreme than Democrats.

A vegan who lives in the uber-liberal San Francisco Bay Area, Klein started out at the Washington Post, headquarters of what Donald Trump derides as the “fake news” brigade, and is a frequent contributor to MSNBC, the left-leaning cable channel. A few years ago he co-founded Vox, an “explanatory” news website built on a business model that Klein’s book suggests is impossible: that Americans across the political spectrum will read a news service that provides impartial information. Klein the journalist makes a living trying to transcend polarisation, a feat Klein the author says is basically impossible.

The book’s argument is straightforward. A “master story” explains American politics. It is that Americans are “so locked” into party affiliations, and along with them a range of other, tightly linked identities like race, religion and region, “that there is virtually no candidate, no information, no condition” that will change their affiliation. The result? “We will justify almost anything or anyone so long as it helps our side.” Polarisation begets more polarisation, as politicians and institutions cater to polarised constituencies, driving the two sides further apart in a vicious feedback cycle.

No individuals are responsible for this state of affairs, says Klein. The fault lies in a system in which everyone can behave rationally and yet produce irrational outcomes. America, he writes, “is full of rational actors making rational decisions.” It’s just that the rationality isn’t about economic self-interest — Klein has almost nothing to say about America’s outlandish (and rising) levels of economic inequality. Instead, it’s about the cultivation of culturally and racially coded political identities.

The book begins with a quick survey of US history to make the point that there used to be far less polarisation. A key reason for past political comity, of course, was that power was concentrated in the hands of white men, with African Americans in the South violently excluded and other groups marginalised. Klein admits that those days, when excluding most groups from the political sphere ensured that the white men in power could agree to compromise across party lines, prove that “there are things worse than polarisation.” But he certainly makes what came next seem worse than party comity. Since the 1960s, the American polity has become more demographically diverse, the parties are now more “sorted” by race, religion, and region, and the Republican Party has become a haven for voters who fear the demands of the ever-growing numbers of urban, non-white Americans.

Race is central to Klein’s model. As he sees it, Trump correctly understood that conservative politics had become more racialised under Obama, leaving many whites convinced that they were, as radio hothead Rush Limbaugh put it, “the new oppressed minority.” Trump merely gave them what they wanted: an outlet for the grievances of white identity politics. With demographic trends working against them, Republicans feel besieged and threatened. Their current extremism, according to Klein, is fuelled by desperation to hang onto power in an “apocalyptic” situation that justifies any means necessary. What he doesn’t acknowledge is that none of this fear-mongering is new. It runs all the way back to the New Deal.

For Klein, institutional factors and human psychology best explain why Republicans wield disproportionate power and wield it in support of an extremist agenda. White Christians are a minority of the American population, but they vote in higher numbers than other groups, and Republican voters cluster in rural areas and in states that have representation in the Senate and the electoral college wildly in excess of their share of the population. (California, with nearly forty million people, has the same number of senators as Wyoming, with a population under 600,000.) In 2018 Democrats won more votes in Senate and White House elections, but the outsized power of lightly populated rural areas, written into the Constitution, ensures that the Senate and the White House are in Republican hands. The concentrated power of whiter, older, more rural and more Christian voters means that the Republican Party can run more right-leaning campaigns than if it had to court a true majority.

Klein does an excellent job of sketching out how institutional factors in American politics have worked to sharpen divides. These include the growth of small donors, often fuelled more by anger about what they are against than by hope for positive change; the nationalisation of politics and the concomitant decline of interest in local issues; and the rise of a new media ecosystem. News outlets are in a minute-by-minute battle to gain and hold the attention of people saturated with information, encouraging sensationalism and the segmentation of the market into ever-smaller slices.

All these changes push Republicans — catering to a relatively homogeneous constituency — into more extreme positions than Democrats, who must play to the centre to win. But this distinction also undercuts Klein’s universalising thesis: if Democrats can represent diverse “identities,” how can it be that human psychology is forcing Americans into only two distinct identity camps?

Before reaching the compelling final third of the book, readers must wade through long summaries of social psychology studies purporting to prove, for example, that strong party identification makes reasoning “fall to pieces.” These chapters are reminiscent of John Gray’s 1992 bestseller, Men Are from Mars, Women Are from Venus, which claimed psychological authority to discern fundamental differences in how men and women approach relationships. Like Gray, Klein confuses “primal instincts that pulse through our psyches” (which should apply to everyone everywhere) with conditions specific to the contemporary United States.

With psychology engulfed in an ongoing methodological crisis, Klein’s uncritical embrace of the field leaves these studies bearing an explanatory load far out of proportion to their credibility. He also has the bad habit of citing uncertain exit-polling data as hard facts.

But let’s return to Klein’s thesis: that “there is virtually no candidate, no information, no condition” that will change an American’s political affiliation. He must be thanking his lucky stars for that hedging adverb, “virtually,” because two events have, in fact, shifted millions of Americans’ political preferences.

The first is the interlocking crisis produced by the SARS-Cov-2 pandemic, the Trump administration’s grotesque mishandling of it, and the attendant economic catastrophe. The second is the video of the police torture and murder of George Floyd and the administration’s doubling down on racism and white supremacy in the face of widespread Black Lives Matter protests.

These seismic events have shifted voters’ attitudes and perceptions. A majority of white Americans now support protests against police brutality and agree with the basic ideas of Black Lives Matter — a huge jump from past years. The shifts presaged in 2018, when Democrats picked up forty House seats in midterm elections, have sharply accelerated. Polls show Biden picking up a wide lead over Trump. One recent poll showed Biden with a thirty-nine-point lead among university-educated white women, a group Hillary Clinton won by seven points.

In the end, Klein’s book can help us understand why Trump won in 2016 and why so many white voters have continued to support him. Much of what Klein explains so well in the last third of the book remains relevant. But because he roots America’s political condition in human psychology and institutions, his thesis can’t explain the apparent party realignment we are seeing today. Thanks to the global pandemic, his book is more useful as an account of the recent past than as a guide to the present and immediate future of the United States. •

Barbara Keys is Professor of US and International History at Durham University. Her books include Reclaiming American Virtue: The Human Rights Revolution of the 1970s (Harvard University Press, 2014).