Is this Europe’s destiny?

European integration has come a long way since the European Coal and Steel Community was created in 1951. A stroll through the Parlamentarium in Brussels reveals the strengths and weaknesses of the vision of a united Europe, writes James Panichi 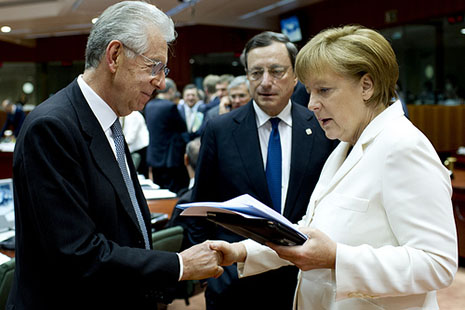 THE quartier Européen of Brussels was abuzz late last month as Italy’s prime minister Mario Monti returned to his old stamping ground at the European Commission for a summit of European Union leaders. With a solution to the eurozone’s crisis still out of sight, journalists prepared to parse every sentence of a man who earned the nickname Super Mario a dozen or so years ago when, as Europe’s competition commissioner, he took on Microsoft.

But a mere ten-minute walk away from the corridors of power it was very much business as usual – business in this case being the handing over of an audio guide to an international politics geek (not this correspondent) and a resentful group of students whose excursion budget didn’t stretch as far as Paris.

Welcome to the Parlamentarium, a slightly naff multimedia exhibition free of charge to the general public. On most days it opens its doors at 9 am, yet even by mid morning its dark, echoey halls are usually still empty. Euro Disney it ain’t.

But don’t be fooled: the Parlamentarium has a great story to tell – assuming you manage to get past the Gen Y shock-and-awe gimmicks (you can move a Dalek-like cylinder over a giant map of Europe or swipe a modified iPhone to trigger sound bites). Because what this exhibition has going for it is context: it tells you not just how European institutions developed, but why the European Union’s founding fathers bothered in the first place. It’s a ripping yarn.

Grainy black-and-white photos – so familiar, yet still so shocking – depict Europe’s postwar devastation in all of its misery. There’s street after street of rubble and destruction, terrified children turning to the camera while fleeing unspeakable poverty, the horror of liberated concentration camps; and the contrast between the appalling images and the air-conditioned order here in the bowels of the eurocracy is too stark to ignore. Surely even the most hardened eurosceptic wouldn’t want a return to 1945.

I’m being emotionally manipulated, of course – but so what? A continent in which competing states spent hundreds of years at war is today bound together by common interests, common democratic values and – for a core grouping – a common currency. What’s not to celebrate?

But then again, the first chapter of the EU story was always going to be the easiest to write. A small group of postwar politicians set in motion a gradual process to lock old rivals into a web of economic and political ties from which none of them could – or would want to – escape. It’s the big idea that worked.

The dream started small in 1952, with the implementation of a low-key agreement on coal and steel involving six sovereign states: Belgium, France, Italy, Luxembourg, the Netherlands and West Germany. By 1957 it had become a fully fledged common market and by 1958 an executive (of sorts), the European Commission, was established. The initial group quickly found new adherents and by 1973 even a diffident Britain was on board. Today there are twenty-seven member states.

The curators are beating me over the head with the message but I’m loving it just the same, as are the Slovenian high school students sitting through the 360-degree digital screen presentation. But here’s the question: how did we get from there – the warm, fuzzy don’t-mention-the-war minimalist federalism of those early years – to where we are today? How did the founding fathers of the European Union convince politicians back home to relinquish chunks of national sovereignty in the name of a European ideal?

Given that euroscepticism is no longer just a pastime for the English, these are questions that mean something today. A mere fifty years after the history-changing events (described here on multilingual panels) the continent is groaning with complaints about the eurocrats dismantling state sovereignty one treaty at a time. Throughout Europe, grassroots movements are increasingly hostile towards the union, with the financial crisis only exacerbating the resentment.

Of course, the main focus of the European Union’s founding fathers (yes, they were all men) was getting the concept up and running in an era in which the nation-state was still king. Jean Monnet was a former French diplomat who had spent the war in London and the United States; Robert Schuman was the Luxembourg-born French foreign minister who took the idea and ran with it; Italian prime minister Alcide De Gasperi was born on the wrong side of the Austro-Hungarian border and ended up serving as an MP in the Austrian Reichsrat. These were people who had a sense of what a transnational European identity could be.

Yet beyond the players, the seeds of the crisis are there to be found in the two distinct themes running through the Parlamentarium’s account of early EU history.

Centrally, there’s the issue of identity. The founding fathers’ logic was simple: European-ness isn’t a zero-sum game. You can be proudly Spanish, French or Danish while still feeling deeply European – just as we might see ourselves as, say, both Victorians and Australians.

Yet that narrative is at odds with the harsh reality of creating a supernational system of governance, because unlike identity, sovereignty is a zero-sum game. Every power ceded to Europe through a treaty or agreement (enforced with fines by the European Commission and the European Court of Justice) is power lost to legislators in member countries. But why should that matter?

In Australia, every time the High Court transfers power to the Commonwealth (and thus away from the states) or occasionally vice-versa, federalists (or sometimes centralists) feel aggrieved but life goes on. That’s because the Commonwealth government, like the governments of the states and territories, is ultimately chosen by Australian voters. Whatever the faults of a weakened federal system, there is no significant democratic deficit.

With European institutions, things aren’t that simple. There’s a directly elected European Parliament (which sits either in Brussels or in a mirror assembly in Strasbourg) – but that’s not where the power lies. The European Council of Ministers, made up of relevant ministers of member state governments, is without question the seat of European governance.

The Council (representing the governments of EU member states) appoints the executive (the European Commission); it can also initiate legislation while vetoing anything the Parliament sends its way. It’s a Senate on steroids, the plaything of European leaders. And while governments of member states may be democratically elected, the Council itself never directly faces European voters. Questions about the democratic legitimacy of EU institutions are therefore central to the discussion about Europe’s future.

WHICH brings us to the make-or-break Brussels summit and Super Mario. On the surface, the Italian prime minister won major concessions from the normally intransigent German chancellor Angela Merkel. For starters, he walked away with an agreement that bail-out funds could go straight to banks (rather than to national governments, which resent the demands for reform that come with the loans). This was good news for Spanish prime minister Mariano Rajoy, who can now share with other countries the pain of his banks’ uncertain future – that is, his banks can now share their bad loans with German taxpayers.

As for whether Monti got much for Italy out of the summit, that’s far less clear. The Financial Times has been running the line that for the Italians the summit was all smoke and mirrors – simply a way of sending Monti home victorious in the hope of shoring up his political support at home. If that’s true, then mission accomplished: the Italian media bought the line that Italy’s technocratic prime minister did better than expected.

But in institutional terms, the summit had little to do with the European Union. The European Parliament wasn’t involved – this was simply a pow-wow for leaders, an informal mechanism called the European Council (it’s like the Council of Ministers, but strictly for heads of government). So, it was actually an Old Europe moment: nation-states horse-trading, bouncing off each other in a giant Hobbesian pinball machine.

Which raises the question of what Europe – and more specifically the eurozone – actually is at the moment. In France the socialist government of François Hollande has just lowered the pension age for some workers from sixty-two back to sixty, for instance, yet in the Netherlands the retirement age is scheduled to rise to sixty-seven by 2025. And in spite of promises made at the summit, a Europe-wide banking regulator may still be some way off, while the European Central Bank lacks the authority to get physical with the seventeen eurozone countries.

In short, Europe’s economy is all over the place and the European Union is at a crossroads. It can slow down – or reverse – the process of integration and run the risk of finding that the eggs can’t be unscrambled. Or it can accelerate the path towards complete federalism among eurozone countries and develop a fully integrated economy (including one retirement age for all – small wonder the French are more cautious about the idea than the Germans). If integration is the way forward, then European institutions need to be reformed: an unelected Council of Ministers throwing its weight around could no longer be acceptable.

But is this Europe’s destiny? Could political and economic unity be the end point of the process that began with the creation of the European Coal and Steel Community back in 1951? I’ll ponder that question on my next visit to the Parlamentarium. For today, I hand over my audio guide and head back up into the Brussels rain. •

James Panichi is a journalist with ABC Radio National on a year’s leave in Brussels.