Is this News Limited’s defence?

News Limited does some things very well, writes Geoffrey Barker. Self-analysis isn’t one of them 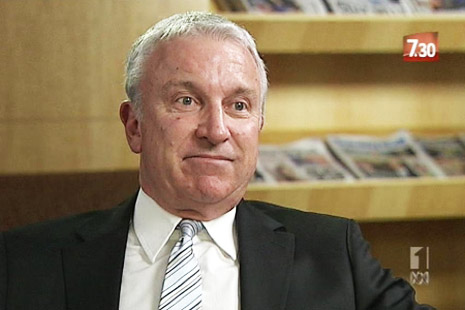 BEWARE those who claim a monopoly on wisdom, truth and virtue.

“We are the only organisation that really takes it up to the government,” News Limited CEO John Hartigan told the ABC’s 7.30 late last week as he moved to fend off criticism of the Murdoch empire’s Australian publications in the wake of the crisis engulfing its British and American publications. The Australian, Hartigan added, was the only newspaper that “properly” covered national politics; the ABC and Fairfax newspapers, meanwhile, enjoy preferred federal government treatment because they are more supportive of its policies.

Hartigan’s claims were at once remarkable and revealing. They suggested that News Limited sees itself as the lone fearless crusader for effective government in a nation populated by an otherwise politically compliant media. They showed that the organisation sees its Australian publications as islands of virtuous concern in a sea of complacent apathy.

It is a self-interested, self-flattering and deluded assessment that says more about Hartigan and News Limited than it does about the character of the Australian media. Anyone who consumes Australia media with even casual interest can only wonder at Hartigan’s words.

To suggest that only News Limited newspapers offer straight-from-the-shoulder assessments of national affairs is absurd. National life is complex and it is conflicted. There are cross-cutting pressures. Honest, expert observers and interpreters can and do differ. Hartigan’s grandiose suggestion that there is only one truth – the News Limited truth – reveals an extremely narrow vision.

Yet Hartigan’s ABC appearance formed a key part of News Limited’s defence of its Australian activities as crises in Britain and the United States forced Murdoch and his senior editors onto the defensive while politicians and law enforcement authorities moved to examine ethical and possibly legal breaches. At the same time, News Limited newspapers reported that the ABC and Fairfax newspapers had engaged in questionable lobbying and dodgy activities. The subtext seemed to be that the organisation’s competitors are hyprocrites wallowing in schadenfreude.

It is true that Fairfax papers have reported the News Limited crisis with great glee and in great detail, just as News Limited has often reported difficulties within Fairfax. That is standard operating procedure in the newspaper game. But dodgy activities by the ABC and Fairfax papers in Australia neither excuse nor ameliorate the phone hacking and other activities being exposed in Britain. The fact that others might have similarly dirty hands does not excuse the excesses of the Murdoch press.

There is, of course, no evidence that News Limited’s Australian publications have engaged in the sort of practices that have forced Rupert Murdoch to issue humiliating public apologies, to cut loose some of his most senior executives, and to give evidence before a parliamentary committee.

Criticism of Murdoch’s Australian publications is focused on what is seen as their relentless pursuit of a political agenda overwhelmingly hostile to the federal Labor government and its key initiatives, including the carbon tax, national broadband network and asylum-seeker strategies. News Limited’s unremitting hostility to the Greens and independents who support the minority Labor government is also seen as combining malice, mockery and misrepresentation.

Hartigan told the ABC that News Limited newspapers had “implicit values” and were concerned by a leadership vacuum created by the current minority government. But he insisted that the company was not pursuing an agenda of “regime change” in Australia. It was a brave denial given the consistently negative News Limited coverage of the Gillard government.

Here, three things need to be said. First, News Limited newspapers are doing nothing wrong in pursuing their agenda. This is still a broadly liberal democracy with a mostly free press, and Gillard and her government have, at times, erred spectacularly. Their dismal position in opinion polls reflects public unease which News Limited seeks to reflect and to magnify.

Thirdly, contrary to Hartigan’s view, no newspaper has a monopoly on virtue or on vice, on competence or foolishness. All newspapers make good and bad judgements. All try to balance political and commercial agendas to maximise their power, popularity and shareholder returns. They are complex organisms populated by complex individuals and their content reflects that complexity for better and for worse.

What particularly distinguishes News Limited newspapers is their consistently selective writing and display of material crafted to further the company’s anti-government agenda, and the overwhelmingly similar supporting opinions expressed by its commentators and analysts. It would be naive to think there was no controlling intelligence overseeing, coordinating and directing this effort to demonise the Gillard government and to promote the Abbott opposition.

While News Limited has an undoubted right to pursue an agenda that reflects its values and boosts its newspaper circulations, it cannot at the same time credibly assert that it is primarily interested in fair, balanced and open-minded political journalism and commentary. Sometimes it is. Often, however, it is manifestly more interested in advancing the corporate agenda, and News Limited journalism shades into strident political propaganda.

It is probably futile to hope that Murdoch’s problems in Britain and the United States might produce a more moderate, reflective and tolerant mindset in News Limited journalism in Australia. But a dash of reflective modesty would certainly make Mr Hartigan a more credible front-man for the company. •

Geoffrey Barker has been a journalist for more than fifty years. He has worked for Fairfax and for News Limited newspapers.