Barack Obama has gone onto the front foot, but did he leave it too late? Political historian David Farber discusses the post–healthcare reform prospects with Peter Clarke 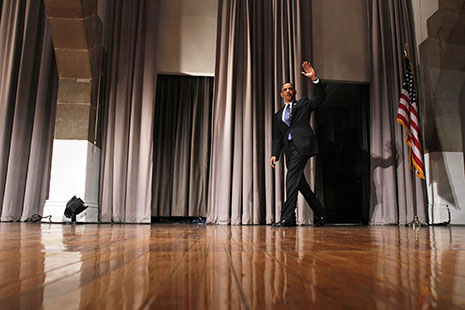 Barack Obama waves as he takes to the stage to speak about financial reform in the Great Hall at Cooper Union, New York, last week. AP Photo/Alex Brandon

JUST one year into his term of office Barack Obama was already being written off as a failure. His determination to reform the American health system was mired in partisan bitterness in Congress and beyond. He was being compared to the one-term Democrat, Jimmy Carter. But with the ultimate passage of the reforming health bills came a shift in the fortunes of the Obama administration. The first black president has expended a chunk of his political capital, especially on the health reform legislation, but somehow seems to have acquired some more in the process. Now he is tackling the deeply contentious reform of the US financial system while facing a blizzard of opposition, especially from the hydra-headed Wall Street lobby. The congressional mid-term polls are due in November, and a loss of the Democrat majority in the Congress looms as a possibility. Obama doesn’t appear to have much time left to effect the major reforms promised during his run for the presidency as the realities of the US electoral cycle bite.

David Farber, professor of history at Temple University in Philadelphia, has written extensively on the history of the political culture of the United States. His latest book is The Rise and Fall of Modern American Conservatism. He spoke to Peter Clarke about these early but critical days of the Obama presidency.