Neither Bernie Sanders’s scheme nor its Republican counterpart has any chance of being adopted, but they make the battle lines clear 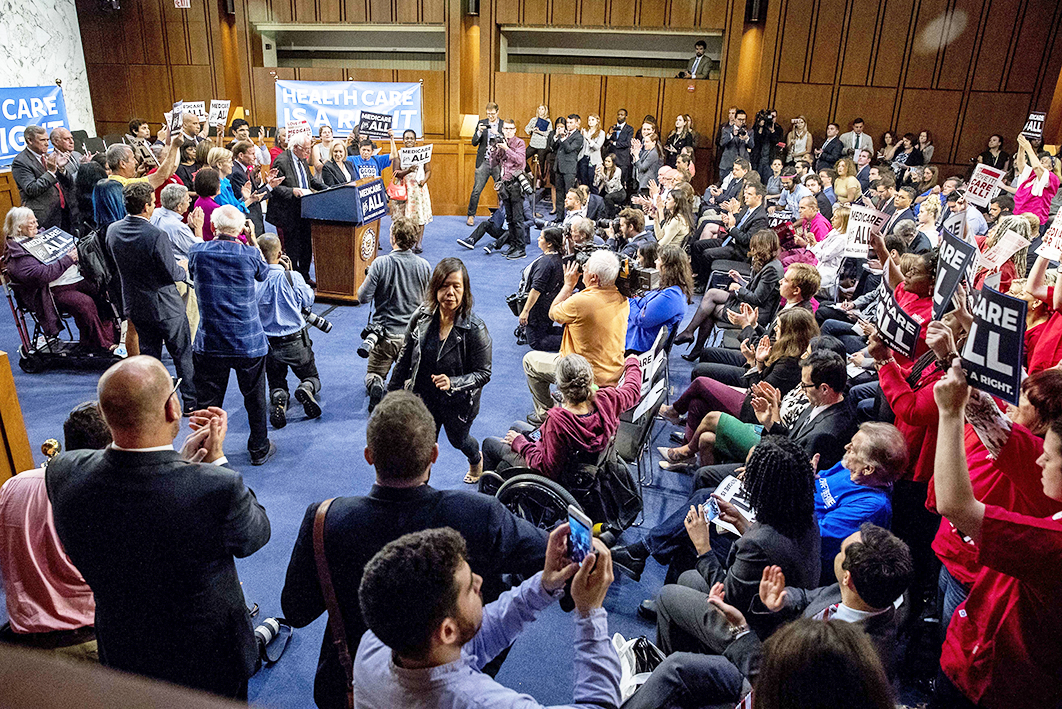 Last week saw the extremes of opinion about healthcare on display in Washington. Republican senators Lindsey Graham and Bill Cassidy released yet another bill to repeal and replace Obamacare, and senator Bernie Sanders (formally an Independent but aligned with the Democrats) simultaneously released his Medicare-for-all plan. These bills, so different in their underlying ideologies, have several things in common: they are slogan-based calls to action, their chances of being enacted are minimal, and they stake out the broad political directions for healthcare reform and the foundations on which future elections will be fought.

The Graham–Cassidy press conference was low-key, with just two other senators present. Sanders, for his part, was surrounded by sixteen co-sponsors, including senators Kamala Harris, Al Franken, Cory Booker, Kirsten Gillibrand, Tammy Baldwin and Elizabeth Warren, several of whom are possible presidential candidates for 2020. Perhaps the imbalance in numbers reflects the Republicans’ lack of enthusiasm for yet another repeal-and-reform effort, especially when they’re flying obstinately in the face of public opinion. Democrats, on the other hand, are presumably looking to the political battles to be fought in the 2018 and 2020 elections.

Trump, who has been on all sides of the healthcare reform issue, took to Twitter in response to Sanders’s bill, saying, “I told Republicans to approve healthcare fast or this would happen.” Despite his seeming support for universal healthcare at various points over the years, and his expressed admiration for both the Australian and Canadian systems, Trump now calls the Sanders proposal “a curse on the US & its people.”

The Graham–Cassidy bill is described by its sponsors as a last-ditch attempt to do what their party has bungled several times before. “If you believe repealing Obamacare is a good idea, this is your best and only chance to make it happen because everything else has failed,” said Graham, hyping what appears to be the key talking point in support of this legislation. Then, ramping up the fear factor, “It’s the only thing between you and single-payer healthcare.”

The bill is more extreme than anything seen to date, essentially taking the federal government out of healthcare altogether. It converts Medicaid expansion funds and Obamacare insurance subsidies into block grants to the states, puts a per capita cap on Medicaid, and allows states to determine whether to keep, modify or discard key Obamacare insurance regulations.

The overall result would be less federal spending than under Obamacare and the redistribution of funding in a way that would penalise states that expanded Medicaid and benefit those (mostly Republican) that chose not to. An analysis by the Center on Budget and Policy Priorities finds that block grant funding would be US$83 billion, or 34 per cent, below projected current law federal funding by 2026, and that some twenty million Americans would lose their health insurance. Worse, the bill’s spending provisions would expire after 2026 unless the Congress took further action.

Sanders’s Medicare-for-all plan is not a new idea: such a scheme has been mooted ever since Medicare was first introduced in 1965. Sanders has previously introduced such legislation (the last time was in 2013); during her presidential election campaign, Hillary Clinton canvassed the idea that people aged fifty and over could buy into Medicare; and back in February this year John Conyers from Michigan introduced a similar bill in the House of Representatives without the accompanying fanfare.

Sanders’s utopian proposal is to transition the United States to a single-payer system where one government plan would provide insurance coverage for all. The benefits (to cover hospital, primary care, medical devices, pathology services, maternity care, prescription drugs, and vision and dental services) are incredibly generous, with no co-payments except for pharmaceuticals, to encourage the use of generics.

Employers would be barred from offering separate plans and Medicare and Medicaid would sunset, but the Veterans’ Affairs health system and the Indian Health Service would continue to operate as they do currently. Patients could use private health insurance to cover services not deemed medically necessary, such as plastic surgery. There would be a four-year transition to the new universal plan; in the interim, Americans would have the option of buying into Medicare or some other publicly run option. Current Medicare rates — typically lower than those paid by private insurance plans but higher than Medicaid’s — would be used as the new standard for medical services.

Cost is a real problem for Sanders’s legislation. It’s unclear how such a generous system would be funded (presumably by increased taxes — the bill mentions changes to the Internal Revenue Code), what the economic offsets would be, and who the winners and losers would be. An earlier version of this approach came with an assumed annual price tag of US$1.38 trillion over the first decade (interestingly, a figure that approximates what the federal government currently spends on healthcare) but that figure attracted considerable disagreement. Other estimates are as high as US$2.8 trillion per year.

Both the Sanders and Graham–Cassidy bills are rightly described as slogan-based shorthand designed to paper over internal party divisions and political realities. But they have fundamental differences. Key among these is that, now that Obamacare’s benefits are clear — modest and limited though they might be — there can be no return to the status quo that existed prior to 2010. The Republican repeal-and-replace mantra was always a con job, built on people’s fears about “socialised medicine,” the visceral dislike of Obama’s legacies among party operatives, and Trump’s election campaign promise that he could deliver something better. In reality, the Republicans are not interested in building a better, properly universal healthcare system.

In contrast, Medicare-for-all can be seen as aspirational. Efforts internationally and in states show how difficult building a single-payer system can be. In 2014, Sanders’s home state of Vermont tried to do this, but the attempt collapsed, despite public support, when legislators figured out how much it would cost and how much taxes would need to rise to cover it. Much difficult policy work needs to be done to tease out the extent to which this promise can be delivered, nationally, in ways that are acceptable to all stakeholders and also economically sustainable. And — a lesson from Obamacare — some very astute communication initiatives will be needed to sell these approaches.

Public sentiment is increasingly directed towards the Democrats’ approach. Growing numbers of Americans see healthcare as a universal right and a majority now believe it is the responsibility of federal government to ensure health coverage for all Americans. This doesn’t necessarily mean support for a single-payer system, which is supported by 33 per cent of those who see a government role in the provision of health coverage (and that support declines when people are told their taxes will increase).

Political conservatives and their allies have no adequate responses to the drive for universal health coverage. “Socialised medicine,” “government death panels” and “less patient choice” are increasingly ineffective scare phrases, and it’s hard to argue that a single-payer system will stifle innovation when Medicare is a leading innovator in healthcare service delivery and financing.

The Republicans face an almost impossible deadline if they are to succeed in their last attempt to undo Obama’s key legacy and tackle Sanders’s single-payer proposal. If it is to be considered under the rules of budget reconciliation (which mean no Democrat votes would be required), the bill, with a Congressional Budget Office costing, must be acted on by the Senate by 30 September. The House must then pass the Senate bill without amendment in order to have something to send to the president to be signed into law.

The Republican leadership is low-key on the chances, despite claims that there are forty-eight or forty-nine votes in the Senate. Senate Leader Mitch McConnell, who has been the victim of Trump’s wrath over previous failures, is unlikely to bring on the bill unless he is certain the votes are there. Senators will face strong opposition from state governors on funding cuts and from increasingly concerned and angry constituents. Senator John McCain, whose vote was decisive the last time the Senate voted on repeal and replace, is close to Graham but is wavering in his commitment this time, saying he wants to see the bill brought up under “normal orders” — that means hearings, open debate and amendments from both sides.

Democrat leaders Chuck Schumer, in the Senate, and Nancy Pelosi, in the House, are keen to keep the focus on saving Obamacare. It is really wasted breath to talk about enacting Sanders’s bill when there is no viable mechanism for bringing it up for consideration. Schumer and Pelosi will push to support the bipartisan efforts to stabilise and improve Obamacare currently under way in the Senate Health, Education, Labor and Pensions Committee under the direction of Republican Lamar Alexander and Democrat Patty Murray. This work may be bold enough to incorporate some small initiatives borrowed from Sanders, such as allowing selected cohorts of the population, based on age or health status, to buy into Medicare under the current system. At best a short-term solution, it could provide the basis for further efforts towards a single-payer system in the longer term.

The elephant in the room is Trump, but his most likely response is to push for a solution — any solution — that he can claim as his victory. He’s more likely to get that via Democrat initiatives than Republican and there is every indication that he would be receptive to a bipartisan fix to Obamacare. It is reported that at a meeting to discuss these bipartisan healthcare reforms he asked, “Can I call it repeal and replace?” ●

The long shadow of the Labor split 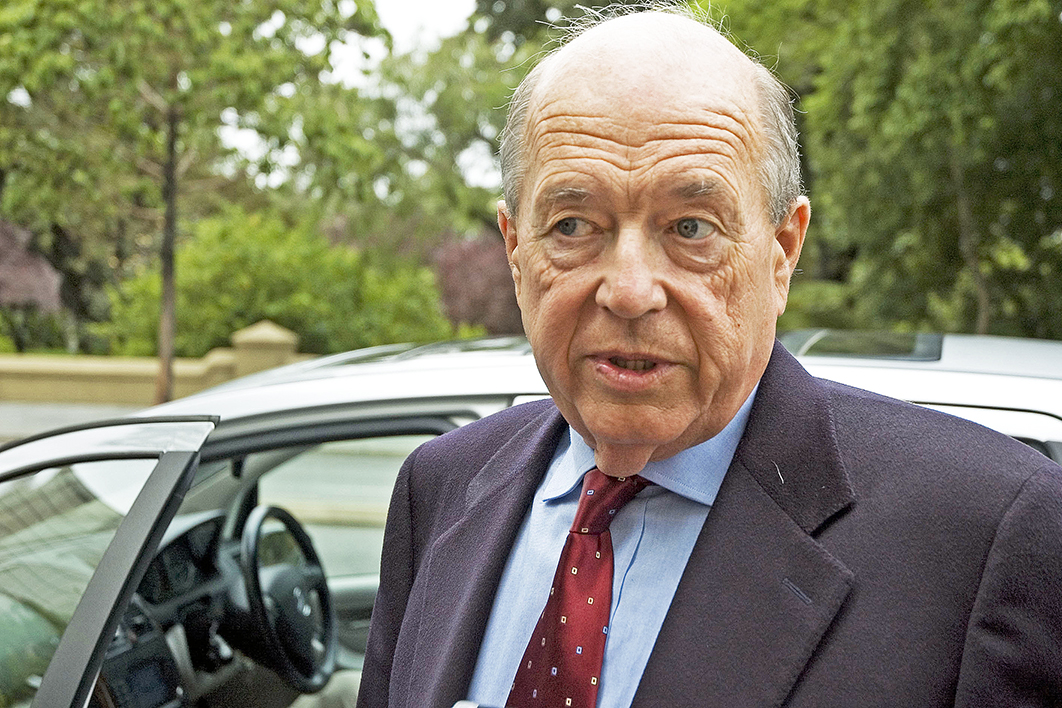