Australia has invested heavily in a construction-fuelled recovery, but at what cost? 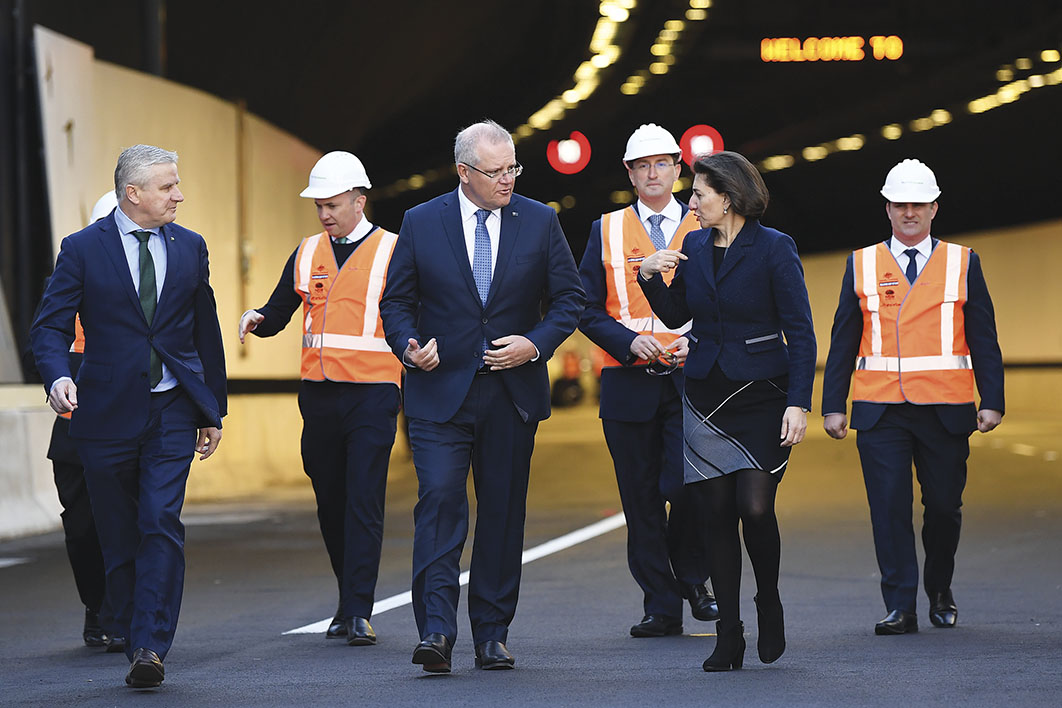 There’s a low, guttural sound seeping through the city. It hovers in the low frequencies, somewhere between 22 and 500 hertz, and it’s hard to figure out exactly where it comes from. It percolates through the streets, across the dips and rises, and under the bridges. You can hear it most days from early morning till mid afternoon, when construction workers are busy at their machines. I hear it especially when I ride my bike along hot, dust-strewn roads made so uneven by building works that it’s hard to keep hold of the handlebars.

This is the feel of a city being remade. Jackhammers, excavators and earthmovers dig up and demolish. Heavy machinery moves in and out of construction sites across the city, breaking up bitumen and disrupting traffic, ushered along by weary traffic wardens whose authority is proclaimed by hi-vis gear.

The tumult was set in motion last year. With the cities furloughed and workers told to stay home, governments at all levels got busy announcing policies to speed up planning and development approvals. “By fast-tracking assessments,” said NSW premier Gladys Berejiklian, “we will keep people in jobs and keep the construction industry moving, as we ride out the Covid-19 pandemic and set our sights on economic recovery.”

Anything “shovel ready” was good to go: just cut through the red tape to make sure the job numbers don’t plummet. Here in New South Wales, more than $100 billion in infrastructure spending was announced in November: $30 billion to be spent in 2021 alone, $14 billion of it on Sydney-based transport projects. In Canberra, the territory government promised $4.3 billion over four years.

The Victorian government earmarked more than $10 billion in its November budget for landmark transport and infrastructure projects like the Suburban Rail Loop, and speeded up approvals for other significant new developments. The Queensland government pledged more than $13 billion for big infrastructure schemes like the Building Acceleration Program, which offers interest-free loans for new projects.

While it made a smaller contribution than many were seeking, the federal government also stepped in, with $11 billion allocated in its latest budget for infrastructure spending and targeted incentives for construction projects.

Using infrastructure spending as an economic recovery tool makes a lot of sense, especially when the construction sector is as important as it has become in Australia in recent years. Without most of us realising it, the sector has reached the point where it employs around one in ten Australian workers.

A construction workforce of that size means our cities must be dug up, revitalised and rebuilt at an ever-quickening pace. Otherwise governments risk dire job-loss announcements from the industry’s powerful lobby groups, like the Master Builders Association’s declaration last June that hard-hat companies faced a “valley of death,” with the loss of hundreds of thousands of jobs.

In the language of media-friendly announceables, keeping the construction pipeline flowing means not just jobs but also “better services” for communities, including better roads, better bridges, better rail and, potentially, more — and therefore more affordable — housing. What’s not to like?

Quite a bit, it turns out. Using construction to keep the economy buzzing has downsides we hear much less about.

“Shovel ready” projects often proceed without proper consultation, as state governments override local planning processes. Some local councils are receiving more infrastructure investment than ever before, but they lack the resources to properly plan and consult. Cutting through red tape and “green tape” is, of course, code for sidelining environmental and community-impact assessments.

Alarmingly, public-benefit tests for many fast-tracked projects also fail to consider the environmental impact of construction itself. Construction accounts for almost 40 per cent of global carbon emissions, and many worry that rapidly scaling up the industry threatens nations’ ability to meet their Paris Agreement targets.

In Australia, the construction sector generates the same amount of waste as all households put together; it is also in the top three most waste-intensive industries in the country. According to the Australian Bureau of Statistics, for every $1 million in value generated for the economy, construction generates eighty-seven tonnes of waste. The sector’s rapid growth means this problem is increasing at a truly alarming rate: since 2016–17, construction waste grew by as much as 22 per cent.

Making matters worse, Australia’s construction sector is a laggard in adopting innovative techniques and using materials efficiently. Globally, the Construction 2.0 agenda — a push for modern, emissions-limiting building practices — continues to accelerate, with a focus on new materials and technologies to better manage building supplies, reduce waste, improve working conditions and reduce environmental harm. Simply throwing money at the sector to keep workers on the tools feels like a very Australian way of managing our way out of a crisis, particularly when investment in research and development remains notoriously low.

For Australia’s cities, the focus on construction also represents poor long-term planning. A new wave of “circular economy” industries is emerging with a focus on recycling building waste materials into new building products like the “green ceramics” being developed by the University of New South Wales’s Veena Sahajwalla. But the new apartments, new freeways and new transport corridors are swallowing potential sites for light industrial or mixed-use development and leaving little space for these industries to grow.

We tend to think of “innovation precincts” as hubs for technology and knowledge workers, like the Australian Technology Park in Sydney. In fact, cities need innovation in the very nature of building — especially in managing construction waste and using materials efficiently — to meet the challenges thrown up by accelerating urban growth.

It’s hard to make space for this kind of innovation precinct when our methods of measuring the value of land tend to favour short-term over long-term value. As the industry website The Fifth Estate recently reported, residential land is priced at $2000 a square metre, double the value put on industrial land. Rezoning favours the outcomes with highest short-term yield.

These are complicated issues. But how the construction industry is allowed to operate and how we think about the waste it generates tell a big story about how this country plans to meet its targets under the Paris Agreement and deal more energetically with the climate emergency.

Meanwhile, seemingly oblivious, the earthmovers and dozers and diggers are being kept busy, the waste keeps piling up, and the emissions continue. •

Sarah Barns is the author of Platform Urbanism: Negotiating Platform Ecosystems in Connected Cities (Palgrave Macmillan, 2019) and works on city innovation projects from her base in Sydney. @_sarahbarns

The revolt of the Liberal moderates

Faced with the outsized power of a minority within the parliamentary party, small “l” Liberals are finally getting organised

The balloon goes up at a 2016 election campaign event in Adelaide. Present were Liberal moderates Christopher Pyne and Malcolm Turnbull, who have since become involved in party-aligned ginger groups. Lukas Coch/AAP Image 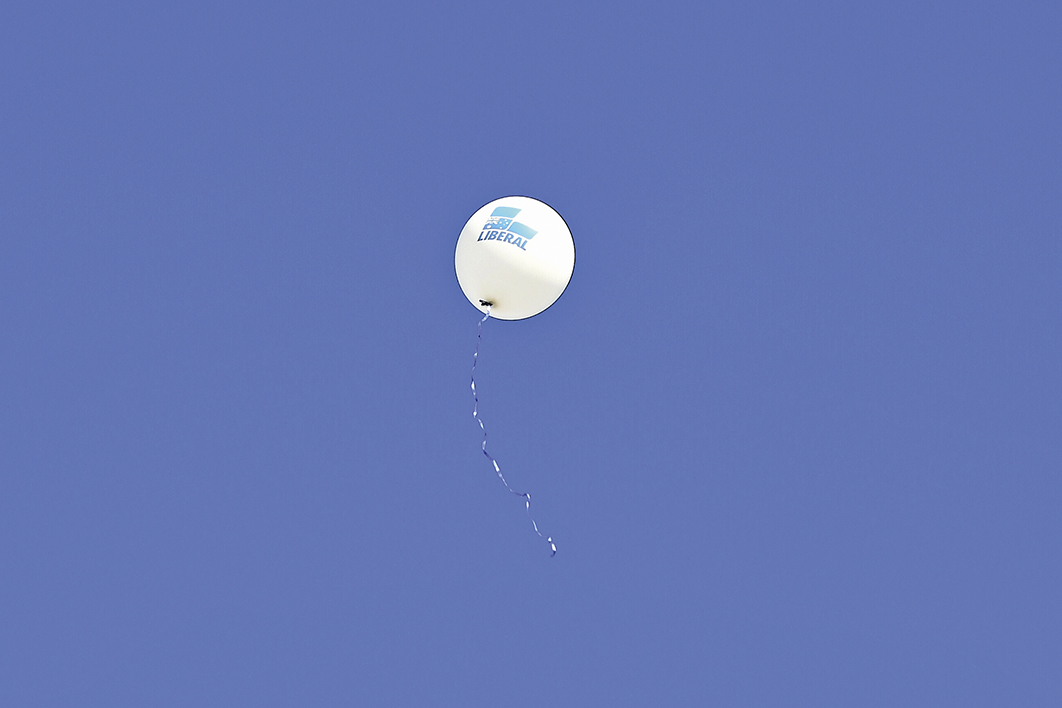 The balloon goes up at a 2016 election campaign event in Adelaide. Present were Liberal moderates Christopher Pyne and Malcolm Turnbull, who have since become involved in party-aligned ginger groups. Lukas Coch/AAP Image