Joe Hockey and the ghost of Bob Menzies

This week’s budget raises the question of whom the Liberal Party now represents, writes Norman Abjorensen 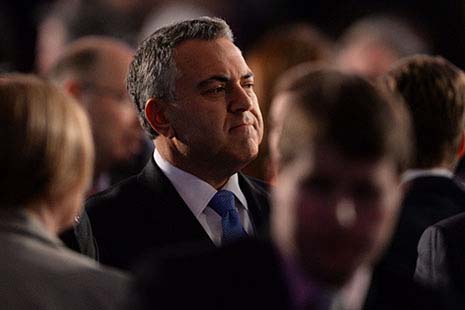 WE LEARN a lot from a new government’s first budget. Strategic priorities, previously existing only in verbal form, are given concrete expression; promises are sorted into the various categories of core, non-core and empty; scores are settled and favours repaid. But the thing we learn most from the first Abbott government budget is about the Liberal Party and who owns it.

The days of the Liberals presenting themselves as “the party for all Australians,” on which Robert Menzies built his edifice for the “forgotten people,” are long gone. It is, of course, debatable whether the party that proclaimed itself independent of vested interests was ever thus: it has from its inception, and just like its antecedents, always been the defender of capital and the protector of privilege. Just as Menzies refused to accept the name “conservative” for the new party he helped found in 1944, he also strove mightily to convey the impression that the reality was otherwise, and with the help of propaganda, scare campaigns, the cold war, the communist bogey and other useful devices, he was highly successful. The unwitting help he received from an inept and poorly led Labor Party is too easily overlooked.

Menzies was part of that brief postwar consensus that tolerated, however grudgingly, the reality of a mixed economy and also the Keynesian imperative of maintaining full employment as an essential prerequisite for social cohesion.

But that is all in the past. For a brief period in the 1980s, with the Liberals consigned to the unfamiliar role of opposition for the second time in a decade, the party engaged in its own civil war, the wets versus the dries. The former sought vainly to carry the flickering torch of social liberalism that harked back to Alfred Deakin and his bold 1896 declaration that liberalism meant opposition to privilege; but the dries, at first seen as heretics, were on the rise. The very term under which they gleefully gathered, economic rationalism, says it all: the only reality, the sole logic, the principle determinant is that of economics. As Karl Polanyi had written four decades earlier, capitalism crossed a threshold when it started to see society as serving the economy rather than the other way around; this was the new Liberal orthodoxy, the end of Deakinite liberalism and the time to step out from the shadow of Menzies who was no longer relevant (but not so irrelevant as to stop Tony Abbott from reprising the trope with his reference to “forgotten families” in his budget reply speech in 2011).

The neoliberal spell under which the Liberal Party had fallen was not just about economics, as the culture wars of the 1990s demonstrated so emphatically. True, economic ends were always in sight, but obstacles and hindrances to those ends had to be eliminated or, failing that, neutralised. The demonisation of trade unions – currently revived with the royal commission – was aimed at both a vexatious influence on industrial relations as well as Labor’s chief funding source; NGOs were seen as amateur busybodies who interfered with corporate profits; public broadcasters like the ABC and SBS were seen as citadels of anti-capitalist sentiment. In fact, while the cold war was thought to have ended in 1989, it simply morphed into the culture wars, which meant opposing anything that smacked of collectivism, however mild.

The term “conservative” came into its own in the 1990s, and was worn as a badge of honour by many Liberals. One short-serving senator, Santo Santoro, even launched a publication with that as its title. Clearly, the wind had shifted: no longer would governments pretend to listen to the people; now, the people were to be cajoled into becoming what the economy – or the “markets” (code for large corporations and very rich people) – wanted them to be. In this very Foucauldian construct of a brave new world of “governmentality,” the people were to be brutally weaned off any expectations of government largesse (but not so corporations); hard-won concessions about pay, overtime, penalty rates and conditions were to be sacrificed to make the economy more competitive; the mildly redistributive provision of a range of government services to the needy was to be either slashed or subject to user-pays; and a savagely regressive goods and services tax was the way to the future.

John Howard (with “for all of us” as his 1996 slogan) was, of course, a part of all this, but his long experience in political life made him cautious in a way that Tony Abbott is not. And it raises the interesting point of just who or what is the Liberal Party’s constituency and, even more pointedly, to whom is it ultimately accountable?

In his landmark radio talk of 1942, Menzies reached out to the “forgotten people,” the middle class who were neither wealthy nor organised. The wealthy could look after themselves, the organised working class had its trade unions; he would be the champion of the forgotten ones.

It was little wonder that he dominated the political landscape for so long. He had a sound political instinct about what would fly and what would not and, most importantly, he learned from history. He had seen how the Liberal Party’s conservative predecessor, the United Australia Party, not only disintegrated (and also destroyed his first prime ministership in the process), but had also, in the post-Depression era, been totally beholden to business interests, which financed it, chose its candidates and dictated its policies. He had seen how the public reacted to this in the bitter defeat at the 1943 election, which returned a mere cricket team of UAP members.

Menzies made it a founding principle of the new Liberal Party that funding and donations were to be the preserve of the organisational wing and were to have no bearing on decision-making. While he acknowledged the importance of business, he saw it as just another voice clamouring for attention. To this end, he kept the Institute of Public Affairs, now a powerful influence on the Abbott government, politely at arm’s length. As such, he was able to claim, with some veracity, that the Liberal Party was not beholden to vested interests.

Can that claim still be made? Look at the Commission of Audit, with its far-reaching brief to dismantle government services and activities: chairman Tony Shepherd is former president of the Business Council of Australia, the head of the commission secretariat, Peter Crone, is the BCA’s chief economist, and the other three members are committed free marketeers. It hardly suggests an agenda-free process. The BCA has a long record as one of the more conservative business lobbies, and the report amounted to nothing less than a shopping list of pro-business wishes.

No government before this one has had such a brazenly tilted approach towards the big end of town. Loud and insistent on a pro-business agenda is Maurice Newman, former head of the stock exchange, and now with a hotline to government as chair of the Business Advisory Council. Former Commonwealth Bank CEO David Murray chairs the financial system inquiry, which is scarcely likely to be critical of banks, and Dick Warburton, an outspoken climate change sceptic, chairs the review of the renewable energy target.

The Liberal Party is keenly aware of who its friends are and who are its enemies, and this is reflected in the budget. Young people, the arts community, environmentalists and university students, not noted for voting Liberal, all take a hit while the well-to-do escape virtually unscathed, save for a temporary levy. Obvious targets such as generous superannuation concessions, concessions for capital gains, negative gearing and diesel fuel rebates – all dear to the hearts of the Liberal core – emerge untouched. (And the gutting of the Australian Tax Office must be a joy to behold.)

The backlash against the unpopular elements of the budget will be directed primarily at Abbott and his treasurer, Joe Hockey. This, of course, is to be expected, but it might be a little generous in the attribution of agency to the men who appear now not so much as leaders, but as mere foot soldiers and spear carriers for privilege and vested interests, taking their orders and duly issuing policy pronouncements. It is a sad decline for a party that once purported to care for the forgotten people. •

Norman Abjorensen is a Visiting Fellow in the Policy and Governance Program at the Crawford School of Public Policy at the ANU. He is the author of three books on the Liberal Party and its leaders.