Just a matter of time for PNG?

Infections are low, but the factors that will help the virus to spread are already clear 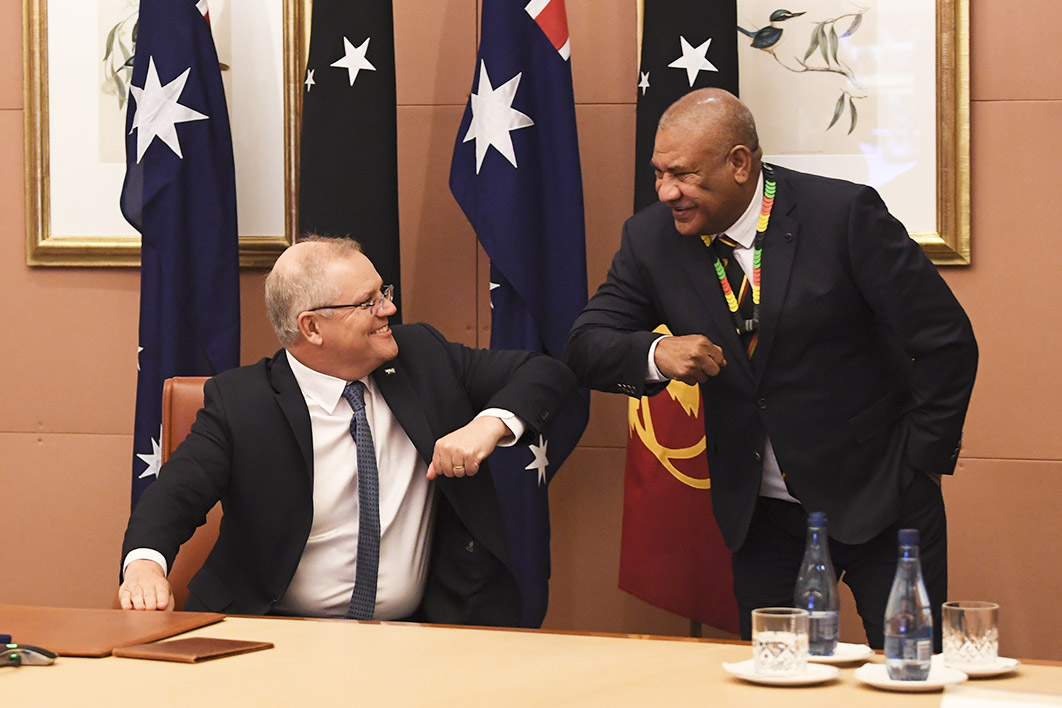 Malcolm Turnbull makes a revealing mistake in his autobiography, A Bigger Picture, when he describes Indonesia as our closest neighbour. It’s not: Papua New Guinea’s coastline comes to within a few kilometres of Australian islands in the Torres Strait, and just 150 kilometres from the Australian mainland further south, nearer than any parts of the Indonesian archipelago.

But we have been overlooking our nearest neighbour for so long that such a slip is hardly surprising. Turnbull devotes five pages out of 698 to the Pacific Island nations, including PNG, and then only in the context of the so-called Pacific step-up, under which Australia has increased its involvement in the region in response to greater Chinese interest. His only other mention of PNG is two sentences in a diary entry referring to a day he spent in PNG on his way to India.

So the fact that PNG faces the threat of a hidden pandemic has largely escaped our attention. “There is no Covid in most of the country,” says Glen Mola, professor of obstetrics and gynaecology at the University of Papua New Guinea and a leading figure in the nation’s health sector. “But there will be — it’s just a matter of time.”

Mola fears that once the virus reaches urban slums and squatter settlements in Port Moresby it will be very hard to stop. “This is where ten to twenty people sleep in the same room most nights,” he tells me. “Once a few people start getting sick and a few die, I predict people in these squatter settlements will disperse. Lots of people will think of going home to their rural village and at that point people will start taking the virus with them. So we will have these cascading epidemics.”

So far the official figures paint a more optimistic picture. As of 10 September, 507 positive cases and five deaths had been identified in the whole of the country, mostly in Port Moresby. But these figures have been revealed by only around 25,000 tests in a population approaching nine million. Australia, with its population of twenty-five million, has conducted 6.8 million tests.

The comparison is misleading in one sense. Most of the testing has been conducted in Port Moresby, which has a population of around 400,000 and where the first cases were detected in overseas travellers. Apart from an outbreak at the Ok Tedi mine — also the result of transmission from overseas — the assumption is that there are few positive cases in the rest of the country. That may be true for now, but it is hard to be certain when testing has been conducted in only half the provinces.

A variety of lockdowns have been introduced and lifted. In March the government declared a state of emergency, with non-essential staff of businesses required to stay home, bans on air and road travel, and restrictions on markets and roadside selling. But these prohibitions were not implemented in some cases and subsequently relaxed in others. In August a curfew was imposed in Port Moresby, schools closed for a fortnight and the wearing of masks made mandatory. Only two weeks later, though, despite the number of positive cases rising, prime minister James Marape lifted the restrictions, saying, “We have to adapt to living with Covid-19 for this year instead of taking on drastic measures.”

This may be the only realistic position to adopt in a developing country like PNG. Tonia Marquardt, medical manager for Médecins Sans Frontières in PNG, says that stage four lockdowns of the kind imposed in Victoria would do more harm than good. “Extreme restrictions in a population that really lives hand-to-mouth in terms of daily needs would do an enormous amount of damage. I think the best approach is to have a really strong response to clusters, locking them down quickly. and to be aware it will keep coming back and to respond strongly when there are outbreaks.” Mola agrees that a hard lockdown strategy would be difficult, particularly in urban areas, and says it could lead ultimately to mass hunger, looting and rioting.

Even before the pandemic, the PNG health system was woefully inadequate to meet the needs of its people. Crowds of sick people often gather outside hospitals, waiting to be triaged; only the more serious cases make it to emergency departments, where they face another wait to be admitted. In a nation where tuberculosis and malaria are widespread and outbreaks of polio have been recorded recently, only 2.5 per cent of GDP is spent on health, according to the World Bank, compared with 9.2 per cent in Australia. The government says there are only 500 doctors and 5000 hospital beds in the whole of the country.

“It’s a real worry that our health services don’t have any slack,” says Mola. “We have to flatten out the spread of the virus as much as possible so we can cope with the extra load on the health system. We don’t have the capacity to give all health workers full PPE” — personal protective equipment — “for every patient or every episode of healthcare. So health workers will get infected and when a minority get very ill and health workers are looking after health workers, people will get very frightened.” He recently advised couples to postpone having a baby because of the likely strain on the hospital system over the next twelve months.

The World Health Organization is working with the World Bank, the Asian Development Bank and the Australian and New Zealand governments to provide more resources for testing and more personal protective equipment. But the challenge in PNG is for the money and physical assistance to get to where it is needed. While Port Moresby hospital made plans months ago to deal with Covid-19, Mola says it has only just started receiving the money to implement them.

Australia hasn’t altogether ignored these problems. It has sent an Australian Medical Assistance Team of eight people, including public health specialists and laboratory experts, to PNG. Last month it announced an $80 million contribution to an international program to provide access to a Covid-19 vaccine for health workers and other vulnerable groups in Southeast Asian and Pacific countries. But the money comes from Australia’s existing, already meagre aid budget.

Earlier in the year the government promised $100 million to help Pacific countries deal with the economic effects of the virus. Papua New Guinea was allocated about $20 million. Again the money is what Canberra calls a “reprioritisation” from the aid budget. Given the scale of PNG’s budget problems it is a drop in the bucket.

Last year, Australia gave PNG a $440 million loan, meant as a temporary measure until the country refinanced its debt with the help of the International Monetary Fund; repayments were subsequently suspended in a sign of the scale of PNG’s economic woes, which have been greatly exacerbated by the pandemic. In May, Australia’s foreign affairs department conceded that “the scale of the Covid-19 crisis will dwarf the resources we have available, including through our ODA [Official Development Assistance] budget.”

What else can Australia usefully do? Provide more testing kits, for one, says Mola. And perhaps we could send them a Norman Swan, he suggests, or another credible medical figure to combat the rumours running rife. One is that the virus has been brought into the country by the WHO; another that it was the Bill Gates Foundation, which wanted to boost its vaccination business. And then there’s the resistance healthcare workers have encountered to measures to stop the spread because “it’s in God’s hands.”

China, among other countries, has been providing virus-related assistance, including tonnes of equipment, as part of the increased engagement with the Pacific that has made Australia nervous. Last month Scott Morrison also announced a “comprehensive strategic and economic partnership” with PNG. Effectively an update of previous such agreements, it is strong on rhetoric about enduring ties, strong democracies and improving healthcare, but contains few specifics.

But the agreement does reaffirm — under the heading of strategic cooperation — the redevelopment of the Lombrum naval base on Manus Island. Apart from having been an Australian dumping ground for asylum seekers, the island occupies a potentially important strategic position off PNG’s northern mainland. In June, the PNG government was reported to be planning to tear up the agreement reached in 2018, with the then PNG foreign minister Patrick Pruaitch saying negotiations had been mishandled by the previous government of Peter O’Neill and he had ordered a review. Pruaitch is among those in the government supporting a greater Chinese role in the region.

Judging by the Australian defence department’s response to questions, that tension has been smoothed over. The department says there has been no request from PNG to review the agreement, work has started on preparing the site for construction, and contractors are being selected “through an open and competitive tender process.” The department is coy about US involvement in the redevelopment, although it was part of the original announcement. “Cooperation between PNG and the United States is a bilateral matter for both nations,” it says.

Perhaps Chinese firms won’t bother to put in a bid. They are already doing just fine on other projects, including at Momote, which has the closest airport to Lombrum. This also is being redeveloped, with a longer runway and other work to upgrade the facilities. Performing the work is China Harbour Engineering, identified by former US navy officer Thomas Shugart as a subsidiary of China Communications Construction Company — which happens to be one of the companies building Chinese bases in the South China Sea and has been singled out for potential US sanctions.

When asked about Australia’s attitude to this work, Australia’s foreign affairs department played a straight bat: “Momote Airport is one of the many airports across Papua New Guinea being upgraded as part of the Asian Development Bank’s Civil Aviation Development Investment Program. Australia welcomes ADB funding of infrastructure projects and support to economic reform in Papua New Guinea.”

Papua New Guinea is not about to look any gift horses in the mouth, and can only benefit from competitive rivalry between China on the one hand and Australia and the US on the other. As Rowan Callick pointed out recently in Inside Story, “Port Moresby is shifting to Beijing as inexorably as its economy is declining.” He added that PNG was the only country in the Pacific to support China’s new security legislation imposed on Hong Kong when the matter came before the UN Human Rights Council.

If the concern about China, increasingly verging on paranoia, keeps strengthening in Australia, PNG won’t mind. It may mean that we finally give our nearest neighbour the attention it deserves, and at a time when it seems likely to be facing a growing Covid-19 caseload. •

Why I changed my mind about super 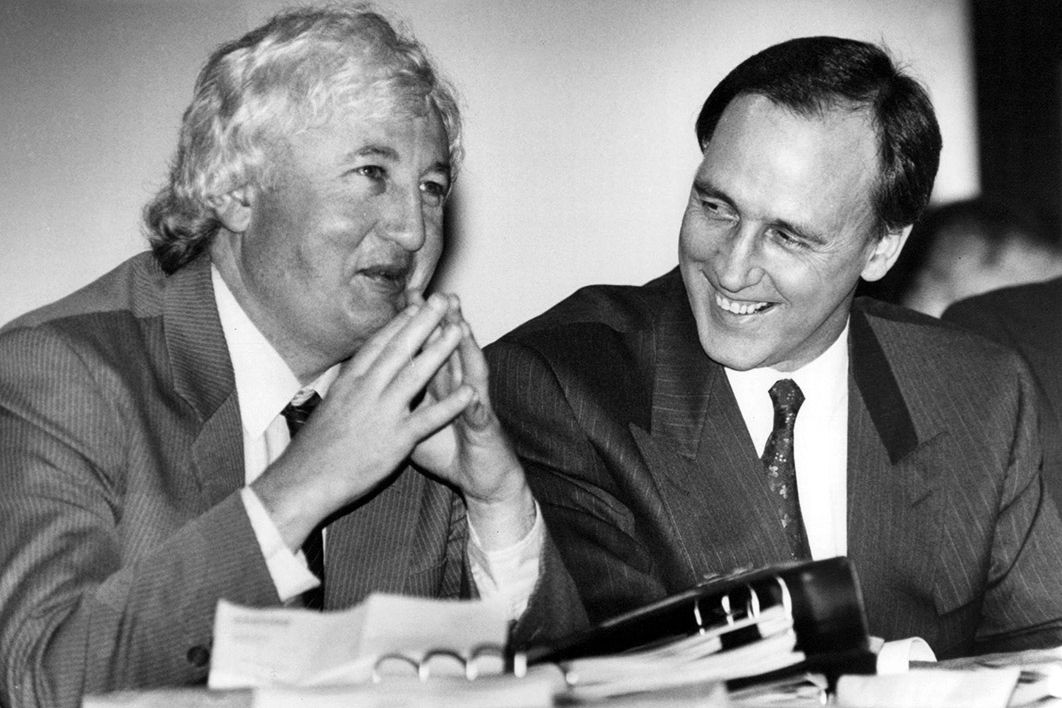