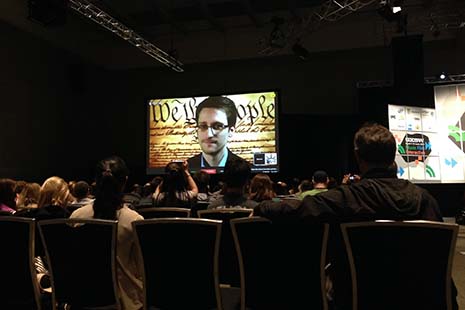 All you need to do is exist: NSA leaker Edward Snowden speaking at the South by Southwest conference in March. Chris Goldberg/Flickr

No Place to Hide: Edward Snowden, the NSA and the Surveillance State
By Glenn Greenwald | Hamish Hamilton | $30

Among my peers, my colleagues, my friends and family, I am something of an anomaly. I am not on Facebook or Twitter. I don’t Instagram or Pinterest. I keep the GPS function on my mobile phone switched off, and have gone as far as covering the camera lenses on my phone and iPad with opaque stickers. When questioned, I reply that I do this to avoid some horrendous involuntary selfie winding up on the internet; though no doubt my friends wonder why I am so paranoid – or perhaps why I think myself so special that my electronic devices would ever be hacked. But the revelations from Edward Snowden, and the investigations undertaken by journalist Glenn Greenwald, detailed in No Place to Hide, suggest I haven’t been nearly paranoid enough.

No Place to Hide details the systematic and comprehensive practice of government surveillance of the citizenry, without warrants, and without probable cause. It looks at how the US National Security Agency, or NSA – in conjunction with intelligence agencies in Canada, Britain and Australia, and with most major internet service providers and search engines – illegally spies on the population of, it seems, the entire world. Through documents leaked to Greenwald by Snowden, a former systems administrator for private firm Booz Allen Hamilton, it was revealed that the NSA has the ability to monitor and collect information from millions of people around the world – both in the form of data (the content of your text messages, emails and phone calls) and metadata (which tracks information like length of phone conversations, where and when calls and emails were made, but not specific content). The NSA has also broken into or otherwise circumvented much of the encryption that protects sensitive data on the internet, and has, by its own admissions, broken privacy laws thousands of times. Domestic legal barriers to prevent such activities – such as the need for warrants and probable cause prior to wire-tapping or otherwise subjecting individuals to surveillance – have been largely ignored or circumvented.

The justification trotted out to excuse such widespread and illegal surveillance of the population has invariably been “national security.” The NSA has attempted to justify its activities by saying that its surveillance program has thwarted terrorist attacks and made the world safer. Indeed, the NSA program, known as PRISM, was part of the post-9/11 legislation enacted by the Bush administration to avoid the intelligence flaws that failed to avert the 9/11 attacks. As No Place to Hide demonstrates, however, the NSA approach was not one of targeted investigation of threats in response to credible intelligence, but rather a dragnet approach to the population at large – listen to enough phone calls, and read enough emails, and eventually someone will do something illegal to justify the whole endeavour. Indeed, there were any number of ways in which one could find oneself on the NSA radar – Snowden’s documents showed that NSA agents frequently spied on partners or prospective “love interests,” for example. The practice became so common that NSA employees gave it its own terminology: LOVEINT. Reading No Place to Hide creates the unnerving feeling that all that’s required to be under state surveillance is to exist.

One recurring question that seems to pop up in the midst of all this is “so what?”. So what if Gmail reads my emails and the government reads my text messages? All they’ll find out is that I’m running late for dinner or that I need to buy milk on my way home. As Eben Moglen, a professor of law and legal history at Columbia University, wrote recently in the Guardian,

We face two claims – you meet them everywhere you turn – that summarise the politics against which we are working. One argument says: “It’s hopeless, privacy is gone, why struggle?” The other says: “I’m not doing anything wrong, why should I care?”

Indeed, Snowden himself acknowledged this possible response to his activism. Early on in his dialogue with Greenwald – indeed, even before Greenwald knew his real name – Snowden wrote, “I only have one fear in doing all of this… that people will see these documents and shrug, that they’ll say ‘we assumed this was happening and don’t care.’” There is something to this: none of my friends and family sees any problem in constantly posting online photos, their personal details, where they just ate, where they are travelling to and from. No one in my circle seemed particularly concerned when I recounted how, following email conversations with my partner about a possible conference I might attend in Estonia, my email was suddenly flooded with pop-ups and other ads promoting cheap flights to Tallinn. When I go out to dinner with one particular friend, he always assiduously checks in on Facebook to let everyone know he’s just arrived at the venue. When I quizzed him on this, he said, “But I want to make sure that people can find me.” Indeed. In the social media era, everyone can find you all the time, and you’re helping them to do it. One of the recent jokes on satirical website the Onion posited that the CIA was now doing all its investigations by simply following people’s Twitter and Facebook posts – proving the adage that if you give people enough rope, they’ll eventually hang themselves. Maybe. Perhaps we shouldn’t be sharing so much personal information online, but then perhaps they shouldn’t be snooping on us either.

As Greenwald acknowledges, there seems to be a surprising lack of concern about the ability of the government to examine our behaviour and activities:

Of course, dutiful, loyal supporters of the president and his policies, good citizens who do nothing to attract negative attention from the powerful, have no reason to fear the surveillance state. This is the case in every society: those who pose no challenge are rarely targeted by oppressive measures, and from their perspective, they can then convince themselves that oppression does not really exist.

But it’s not hard to see a continuum between the surveillance of your text messages and emails, and policies like the New York City Police Department’s stop-and-frisk program (which inordinately targets young African-American men), or policies of preventive detention (but only for persons with Arab-sounding names), or other forms of racial, social, and cultural profiling. They are all part of the same approach: if you’re planning something nefarious, this way we get you before you can cause any harm. If you’re not planning something nefarious, you’ve got nothing to worry about. Wouldn’t you prefer to be a little inconvenienced, have your rights a little bit restricted, if it means catching someone before he or she perpetrates another 9/11?

As much as we can reassure ourselves that we all have to make sacrifices for the greater good of a safer society, though, that’s easier to do when it’s not your home being targeted for search at 3 am in the morning, and it’s not your daughter being held without charge for days at a time, and not your child on the wrong end of a drone strike – the inevitable end result of all this surveillance. Indeed, there are considerable portions of the Australian population (the Indigenous Australian population comes to mind) who are very aware of what it means to be under constant state-sanctioned surveillance. And even if empathy doesn’t convince you, imagine if we all found ourselves under the control of a leader who didn’t approve of our religion (or lack thereof), our educational status, our sexual orientation, our gender identity, our political leanings. How comfortable would we feel if Orwell’s Thought Police really existed?

[T]he true measure of a society’s freedom is how it treats its dissidents and other marginalised groups, not how it treats good loyalists... We shouldn’t have to be faithful loyalists of the powerful to feel safe from state surveillance. Nor should the price of immunity be refraining from controversial or provocative dissent. We shouldn’t want a society where the message is conveyed that you will be left alone only if you mimic the accommodating behavior and conventional wisdom of a Washington establishment columnist.

Indeed, history is replete with examples of when the majority suddenly becomes the marginalised or repressed, or where your attitudes or beliefs are criminalised and persecuted by a ruling elite. Citizens in countries like Russia, Uganda, Bahrain, South Africa, Rwanda and the former Yugoslavia know all too well what happens when you suddenly find yourself in a minority, on the receiving end of laws and policies that criminalise your beliefs, your practices, indeed, your very existence.

No Place to Hide is a compelling read, written in an accessible and engaging manner, and, coming from Greenwald, a former litigator, mostly devoid of grandstanding or hectoring – though the Establishment Media, as he terms them, come in for some excoriating critiques. Greenwald is largely dismissive of journalists who work for mainstream media companies, decrying them as, at worst, government toadies and lackeys and, at best, award-hungry sycophants who are happy to publish big scoops if it gets them accolades and increased circulation rates, but who don’t really care to challenge the status quo.

The book details how Greenwald came to be approached by Snowden and what the leaked materials revealed, and finishes with a more reflective analysis of the need for privacy and its attendant rights, freedom of thought and expression. Greenwald contextualises the NSA revelations in a political and philosophical framework, arguing that infringement of these rights shouldn’t be dismissed with a shrug and an “oh well, I’m not doing anything wrong.” We should, he writes, remember Martin Luther King Jnr’s famous exhortation, that “injustice anywhere is a threat to justice everywhere.” Whether we are concerned about the assault on privacy everywhere, or whether we are just uncomfortable with the idea that the government knows we recently ordered the box set of the Twilight movies, No Place to Hide is equal parts absorbing, depressing and terrifying, and leaves us in no doubt that it is up to us to do more to hold our leaders to account when they violate our rights, and that we should never allow the pat defence of “national security” to override our personal securities and liberties. •

Emily Crawford teaches law at the University of Sydney.