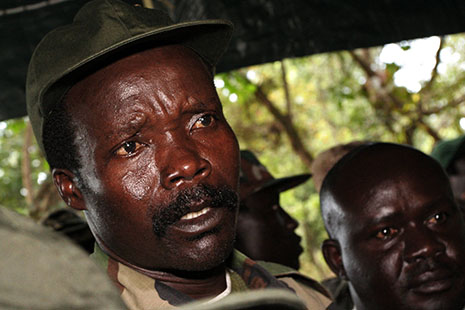 BEFORE DAWN one morning in late 2004 I took a taxi to the top of a hill overlooking a town in northern Uganda. As the darkness began to lift I watched columns of tiny figures marching in single file along the muddy paths leading out of Kitgum. They were the “night commuters” – tens of thousands of northern Ugandans, mostly children but women too, who left their villages every night to walk to nearby towns before returning home in the morning. They slept in churches, schools and on concrete sidewalks. Comfort was not the idea – safety from Joseph Kony’s Lord Resistance Army, or LRA, was.

A self-styled mystic driven by what one Ugandan scholar described as “apocalyptic spiritualism,” Kony had been terrorising the region since the late 1980s. The original target of his rebellion was President Yoweri Museveni, who had ousted General Tito Okello and his northern Acholi-dominated government in 1986. But as Kony used fear and violence to drive his conflict forward it was his own Acholi people who became the victims.

The LRA’s methods were heinous. Suspected government collaborators had their lips, noses or ears hacked off; the weak were often maimed. Worst of all was the conscription by kidnapping. LRA fighters would raid villages, usually at night, and force children – 25,000 of them by 2004 – into the bush with them. Girls become sex slaves; boys were used as porters and then fighters. The victims soon became the perpetrators.

When I returned to Kitgum nearly two years later, the tense, almost wartime atmosphere had softened. Kony, who along with several of his commanders had been indicted for war crimes by the International Criminal Court, had briefly emerged from the bush in neighbouring south Sudan, where he had sought sanctuary, to declare that he wanted peace. UN-sponsored negotiations involving Museveni were underway. With a truce holding, night commuting had all but disappeared. The more than one million northern Ugandans who had been shepherded into displaced person’s camps dared to believe that perhaps the war was finally coming to an end.

But as with previous lulls in rebel activity this one could not last. In the second half of 2008, LRA forces began launching sporadic raids on villages in Congo and south Sudan, which both border Uganda. Kony kept frustrating negotiators by promising to sign a final peace deal and then failing to turn up to the designated meeting place in the bush. The sticking point, he claimed, was the International Criminal Court arrest warrants, which he wanted dropped.

A month ago, on 14 December, Museveni decided that he had had enough. Launching Operation Lightning Thunder, a joint offensive with Congo and south Sudan, the Ugandan military attacked LRA bases in northeastern Congo from the air and then the ground. The campaign, which received the tacit backing of the UN and Western nations, was initially described as a success by Uganda, with several LRA camps in and around Garamba National Park reportedly destroyed. Few, if any, rebels were killed, however. And the reprisals did not take long to begin.

Between Christmas and New Year Kony’s rebels, operating in small bands and moving quickly through the bush, attacked a series of villages in northeastern Congo. In their bloodiest spate of violence since 2004, LRA fighters killed hundreds of people, including dozens who were sheltering inside a church. The attacks have continued into 2009, forcing more than 100,000 Congolese to flee their homes. By this week the UN estimated that more than 500 people have been massacred by the LRA in Congo, most of them since Christmas.

Nearly an equal number of civilians have been kidnapped, among them children abducted from their classrooms. Aid groups say that in some Congolese villages children are refusing to go school and are sleeping in the bush instead of their homes to try to avoid being kidnapped. Dozens of deaths at the hands of LRA rebels have also been reported in south Sudan, and the authorities in the Central African Republic fear that their civilians may be next victims of Kony’s men.

For long-time Uganda watchers there was a certain inevitability to all of this. Museveni’s preferred solution to the war in northern Uganda had always been to defeat the LRA militarily. It is, I think, the lingering mindset of a former bush fighter. Though Museveni is generally regarded as having ruled Uganda well since seizing power – ensuring stability in most parts of the country, growing the economy and tackling the Aids crisis – he is hardly the enlightened African leader that many people at home and in the West hoped he would be. Nods towards democracy have been grudging and usually superficial, and the army has remained an integral, and expensive, part of the power structure.

And the military strategy against the LRA has proved itself flawed several times before. During the Nineties, heavy-handed attempts by the army to defeat Kony in northern Uganda failed, angering the many Acholis whose innocent relatives had been kidnapped by the LRA and now faced being killed by government troops. Operation Iron Fist, in 2002, was another army effort to end the war by attacking LRA forces in Sudan, a country which had long assisted Kony. It was a major failure, and instead provoked the rebels into re-entering Uganda and launching brutal raids on civilians of the sort not seen since the mid-Nineties.

During my visit to Uganda’s north in 2006, the message I heard from people was that they were willing to forgive Kony, despite his crimes, if only they could return to their homes and be assured of safety. But with the latest bloodletting those hopes of security have disappeared. Though the attacks have taken place outside Uganda the hundreds of thousands of Acholi people who still live in camps know how fast the rebels can move.

“The LRA does not have to be everywhere for people to be paralysed by fear,” Chris Dolan, a British academic who has studied the LRA closely and runs the Refugee Law Project in the Ugandan capital Kampala, told me. Dolan is strongly critical of the latest effort to wipe out Kony. Although the rebels had been launching sporadic raids in Congo before the December operation, the violence had been largely contained for two and a half years, he said. Now the peace process may have been set back by several years. To Dolan, Museveni’s decision to send in the army had less to do with Kony than keeping his soldiers busy.

“What do you do with a large military that does not have much work to do?” he said. “The army is the power-base of the regime and has to be justified.” •

Xan Rice is the Nairobi-based correspondent for the Guardian. He writes regularly for Inside Story.