With financing very much on the agenda, small nations are punching above their weight at COP27 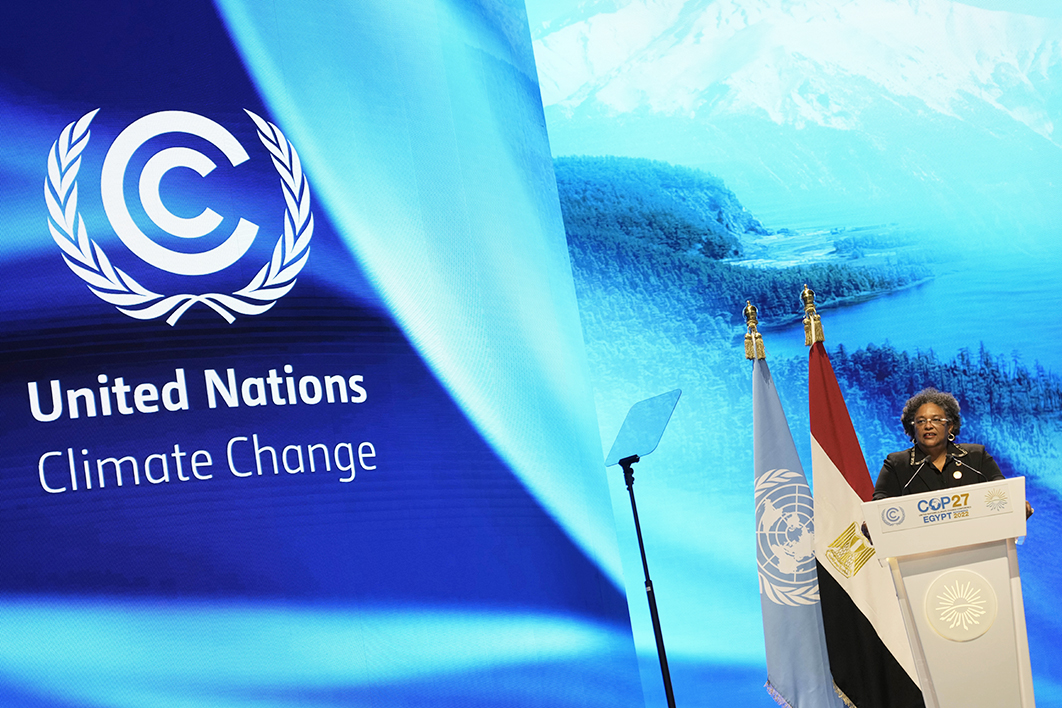 Sharm el-Sheikh is not the most propitious venue for a UN conference on climate change. Sprawling along the remote tip of the formerly contested and almost entirely desertified Sinai Peninsula, it is essentially an amalgam of luxury hotels with their own private beaches and still-being-completed holiday resorts aimed, without concession to taste, at the mass European and Middle Eastern cheap-flight tourism market.

It takes twenty-five minutes in an overpriced taxi, and longer in a free shuttle bus, to get from either end of the coastal strip to the UN COP27 venue, which has been specially constructed in temporary buildings around the international convention centre. When the conference palls, the bright lights, loud music and traditional Egyptian belly dancers of the Naama Bay strip inevitably have their appeal. “It’s like Las Vegas,” one delegate said, “only not as highbrow.”

Nevertheless, this is where COP27 is taking place, and it’s the scene of plenty of serious negotiation and debate. The Leaders’ Summit in the first two days was notable mainly for the traffic jams caused by presidential convoys and tight security. Although the speeches didn’t generally rise very far to the occasion, they served their allotted purpose: forcing heads of government to declare in front of their domestic TV audiences that climate change is an urgent priority and they are committed to stronger action to combat it.

The two most eagerly awaited speeches were not actually scheduled for the summit itself. Fresh from his unexpected triumph in the US midterm elections, Joe Biden arrived in the largest convoy of all a couple of days after the other leaders had left. In his usual inimitable monotone, he declared that the American Inflation Reduction Act — his administration’s unprecedented package of climate change measures, which finally got through Congress in August — would enable the United States to meet its 2030 emissions targets, driven by investment in new technologies and American enterprise.

The president also declared the United States would provide more help to developing nations to combat a climate crisis that concerned “human security, economic security, environmental security, national security and the very life of the planet.” Climate wonks poring over the text could find little new support that had not already been announced, but the general uplift from Biden’s presence was evident. A grateful audience gave him a standing ovation, not something hard-bitten COP delegates are wont to do.

The other eagerly awaited leader has only just arrived. President Luiz Inácio Lula da Silva of Brazil, fresh from his even more momentous election victory, will make his speech today, and his ovation will be even longer. Under the far-right, Trump-imitating Jair Bolsonaro, Brazil has gone from climate leader to renegade destroyer of the Amazon, and the relief among the climate community to have Lula back in power is palpable.

Without control of Brazil’s Congress, the returning president may struggle to pass the environmental legislation he wants, but he will beef up security protection for forest lands and indigenous peoples, and commit to “net zero deforestation” in the future. He has already made clear that he will be a regional and global champion for climate action, and in a geopolitical world riven by tension between the big Northern hemisphere states — the United States, China, the European Union, Russia and India — there are high hopes for his Southern leadership.

If the big countries inevitably take up the largest space in UN climate conferences — commensurate with their outsized emissions pouring into the atmosphere — there is nevertheless always room at COPs for the small nations to make a mark. It is one of the more remarkable features of the thirty-year-old UN climate regime that decisions have to be reached by consensus, which gives otherwise internationally invisible and powerless countries a crucial role. Coupled with the fact that the poorest countries most vulnerable to climate change — the small islands of the Pacific and Caribbean, low-lying nations such as Bangladesh and glacier-melting ones like Nepal — are the evident victims of a climate crisis they didn’t cause, this creates a rather remarkable dynamic.

At the Paris COP in 2015, it was the tiny Marshall Islands that led the High Ambition Coalition with the European Union and the United States that drove the final treaty negotiations to an unexpectedly radical conclusion. And in Sharm el-Sheikh it is Vanuatu and Tuvalu that have made the early headlines. They have been reiterating their request for an International Court of Justice ruling on the legal liability of rich countries and companies for the historical emissions that threaten their island existence. The two countries have demanded that the world agree a “Fossil Fuel Non-Proliferation Treaty” to manage the global phase-out of coal, oil and gas.

The most powerful speech at the Leaders’ Summit also came from a small island. The prime minister of Barbados, Mia Mottley, was the standout speaker at last year’s COP26, and retained her top spot in the unofficial charts with another remarkable and insightful contribution here.

Mottley’s rhetoric transfixed the hall. “We have the collective capacity to transform,” she told the heads of government sitting in the rows of seats in front of her. “We’re in the country that built pyramids. We know what it is to remove slavery from our civilisation… to find a vaccine within two years when a pandemic hits us… to put a man on the moon. And now we’re putting a rover on Mars. We know what it is. But the simple political will that is necessary, not just to come here and make promises, but to deliver on them and to make a definable difference in the lives of the people whom we have a responsibility to serve — this seems to be still not capable of being produced.”

Mottley’s core argument was that the international financial system isn’t working for poor and middle-income countries, like Barbados, that want to move to net zero emissions and cope with the devastating climate change they are already experiencing. They cannot access the finance or the technology to do so. She laid the blame squarely on the World Bank, the IMF and their developed country shareholders. “This world,” she said, “looks still too much like it did when it was part of an imperialistic empire.”

Mottley is not, however, content with rhetoric. Over the last few months she has been promoting a new plan for financial reform dubbed the Bridgetown Initiative after the Barbados capital in which it was hatched with her adviser, economist and former investment banker Avinash Persaud. And it has been getting increasing traction at COP27.

At the core of the plan are three innovative reforms that between them could galvanise more than US$1 trillion of new finance for climate-compatible development, including emergency help to countries hit by extreme weather events, and low-cost lending for emissions reduction investments.

The first is to get the World Bank, along with the other multilateral development banks, or MDBs, in Africa, Latin America and Asia, to use their capital base more expansively. These banks are all funded by the richer countries to provide concessional lending to developing ones. But the World Bank in particular has become deeply risk-averse. Highly protective of the triple-A rated status of its bonds, it has refused to use its healthy balance sheet to increase its lending capacity.

A recent expert report commissioned by the G20 group of nations found that between them the MDBs could lend an extra US$500 billion or more if they slightly relaxed their risk appetite and capital accounting procedures and better utilised government guarantees.

Second, Barbados has been pioneering “disaster clauses” in its debt contracts. These are stipulations that if a country borrowing money from private or public creditors experiences a predefined extreme weather event, all its debt repayments will be postponed for two or more years. Given how much many developing countries are forking out in debt repayments, such clauses immediately release millions of dollars of liquid funds for disaster relief and reconstruction and public service budgets. The creditors get repaid on a later schedule, but with the interest they have lost made up, removing any financial loss. Barbados is proposing that such clauses should become standard practice in all sovereign debt contracts.

Third, Mottley has called for a new issuance of Special Drawing Rights, or SDRs, the reserve currency the IMF is empowered to release to support the global financial system. She proposes that these SDRs be put into a trust fund that can then back new lending for emissions reduction investments such as renewable energy, methane control and forest and land management. For most developing countries, the cost of capital is simply too high to enable them to borrow for such priorities.

Where developed countries with strong currencies can borrow on international markets at 3 to 5 per cent, most developing countries — including relatively stable, growing ones such as India and South Africa — face interest costs at least three times higher. Barbados proposes that the new fund should auction its lending capacity to the projects, wherever they are located, that can achieve the highest and fastest emissions reductions.

These reform ideas are not the only ones circulating at COP27. The V20 group of climate-vulnerable nations has produced its own suggestions for new financing mechanisms, and innovative ideas are being produced by academics and civil society organisations, including a plan for the cancellation of developing country debt in return for commitments to verifiable climate action plans.

Mottley used her short stay in Sharm el-Sheikh to discuss her ideas with other leaders. French president Emmanuel Macron duly called for an expert group to look at the Bridgetown Initiative and other proposals and make rapid recommendations on their implementation to the international financial institutions and their shareholder nations next year.

And in the negotiating sessions that have followed, ministers from other countries have gone further. Several have called for a review, not just of individual funding mechanisms, but of the entire international financial system. Many countries are today experiencing once again the problem of the dominance of the US dollar. As American interest rates rise, their own currencies are depreciating, making imported energy, food and manufactured goods more expensive and raising the cost of dollar-denominated borrowing. Another global debt crisis looms, with more than forty countries in or at risk of debt distress, according to the IMF. When the United States catches a cold, one delegate noted, the rest of us get flu.

So an even bigger agenda is beginning to make its way into COP speeches and debates. The present international financial system and its institutions were designed in 1944, in a very different economic and political world. Nearly eighty years on, they could do with a refresh.

No one is yet claiming Sharm el-Sheikh will one day be as famous a venue for international financial reform as Bretton Woods. But the seeds are being planted. •

Michael Jacobs, Inside Story’s global climate correspondent, is Professor of Political Economy at the University of Sheffield and a former climate adviser to British prime minister Gordon Brown.