Labor, the Coalition and the problem of political identity

Labor and the Coalition are caught between vying for the middle ground and differentiating themselves in the political marketplace. Behind it all, there’s one vital difference, writes Norman Abjorensen 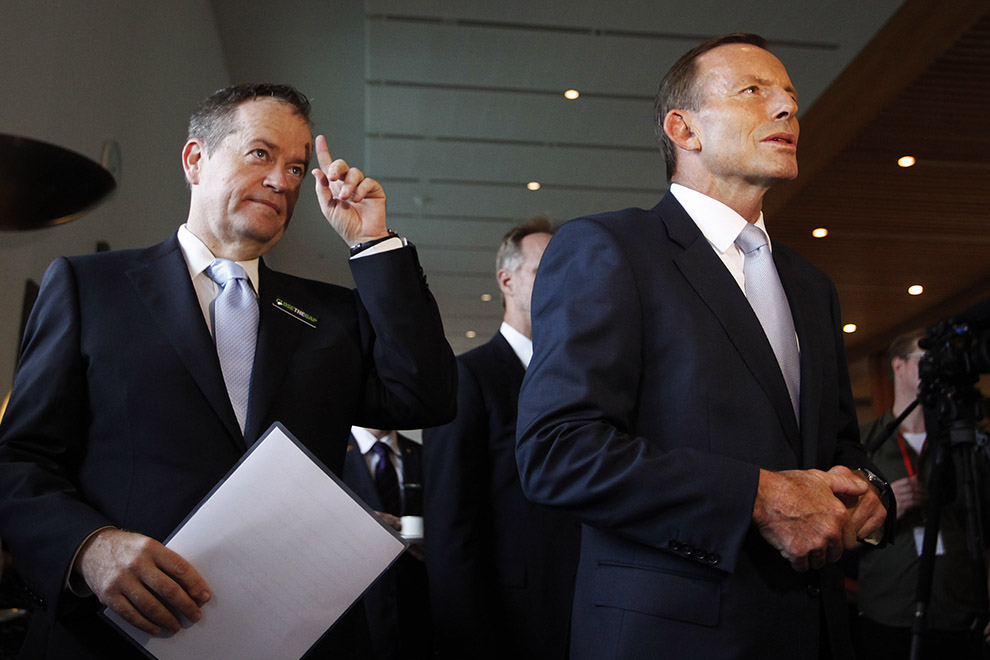 If a new poll reflects opinion across the electorate then we are in the midst of a disturbing spike in public disaffection with Australian political parties and the political system in general. The study, conducted by the Australian National University in partnership with the Social Research Centre, found satisfaction with democracy had fallen from 86 per cent in 2007 to 72 per cent when attitudes were surveyed again in June. Even more worrying is the number of Australians who no longer believe it makes a difference which party is in power – a rapid plunge from 68 per cent to 43 per cent in the same period.

To overstate the obvious, political parties, especially the major ones, have an image problem. In an increasingly competitive market that paradoxically offers an ever-narrowing choice, they struggle – like cars, soft drinks and other consumer products – to delineate differences from which to lever competitive advantage.

In a politics in thrall to opinion polls and focus groups, the slightest shift in market share may well mean the difference between having power or not. The question of how to appear different without any substantial deviation from the consensual norm – that ever-elusive political centre – becomes the all-consuming task. But this blurring of identity, or party convergence, is affecting the political marketplace in another way: consumers (voters) are turning away from the big brands in droves in search of difference.

Nowhere has this been more apparent than in the historic rerun of the Senate election in Western Australia in April. In Australia’s two-party system, the Labor Party and its conservative Coalition opponents have traditionally accounted for around 90 per cent of the vote. But that has been in steady decline over the past three decades, notably with the rise of small parties such as the Australian Democrats and Greens. In the WA election, the two major parties garnered just 55.6 per cent of the vote, with the Liberals’ Coalition partner, the Nationals, bringing the total to just 58.6 per cent, a historic low.

The shift isn’t confined to Australia. A poll taken in Britain in June by ICM showed combined support for the two main parties there, the Conservatives and Labour, at just 63 per cent, the lowest ever recorded by the pollster.

This fragmentation of political support isn’t inherently bad, but it can lead to political paralysis (as Joe Hockey, with his stalled budget, knows only too well). The success of small parties – like the Palmer United Party in Australia and UKIP in Britain – is based on a shallow populist appeal offering simple solutions to complex problems. There is a degree of cynicism at work here; these parties know they can promise all they like without ever having to implement their programs or be held accountable.

The days of rusted-on support have long gone; people no longer vote the same way their parents did or from class habit, nor do they necessarily vote the same way each time. Brand loyalty has clearly evaporated, but the paradox is that the more this has become apparent, the more the two parties have grown to resemble one another in policies and approaches. Logic would suggest a reverse strategy of standing out by being different.

When you look at the broad policy front, the core common elements are striking. Support for the private sector, economic growth, control of inflation, maintenance of the US alliance, border protection – all are broadly common to the two major parties. This extends even to leaders. Just as Kevin Rudd could easily have been a Liberal leader, Tony Abbott, once an admirer of Labor, could have emerged on that side of politics. And in Britain, has the Labour Party ever had a more Tory prime minister than Tony Blair? The real marketing challenge at each election lies in the parties crafting a pitch that gives the impression of difference whatever the underlying sameness.

And yet, below the surface, if you peer close enough, there are discernible differences, albeit subtle ones, that separate Labor and Liberal in Australia. These don’t figure in election campaigns or public conversations, but all the same they shape certain underlying assumptions about public policy. And they involve what is ultimately a philosophical issue: what is the proper role of government in a modern society?

In a sense, the fundamental dynamic of Australian politics has never changed: a conservative party, fearful of Labor making radical change if it gets hold of government, campaigns chiefly in negative terms. Despite all the posturing to the contrary, the raison d’être of the Liberal Party is to keep Labor out.

Prior to the rise of Labor in the 1890s, politics was dominated by self-styled liberals and conservatives who, by and large, shared a remarkably similar worldview. The rise of the Labor Party, while it was never in any way socialist, challenged that worldview by seeking to tip the balance, ever so slightly, towards labour and away from capital.

Labor, of course, has embraced neoliberalism just as much as the Liberals. (It was the Hawke government that embarked on large-scale liberalisation thirty years ago.) But if a scintilla of difference still remains between the two sides, it is a faint belief within Labor that a hand on the wheel of government can still modify the excesses of the untamed market. The National Broadband Network and the National Disability Insurance Scheme both constitute recent evidence of this, and have provoked both conservative criticism and reaction.

Meanwhile, the Abbott government’s new raft of incentives to encourage state governments to exit the market is in line with the ideological thrust of the report of the Commission of Audit – the clearest blueprint yet of the Liberal Party’s ideological view of government.

The difference is admittedly small and has narrowed significantly over time, but what separates the parties is still what has always separated them – an argument over the appropriate role for government. •

Norman Abjorensen is a Visiting Fellow in the Policy and Governance Program at the Crawford School of Public Policy at the ANU. He is the author of three books on the Liberal Party and its leaders.