Would a Health Reform Commission give a Labor government the cover it needs to deal with powerful interest groups? 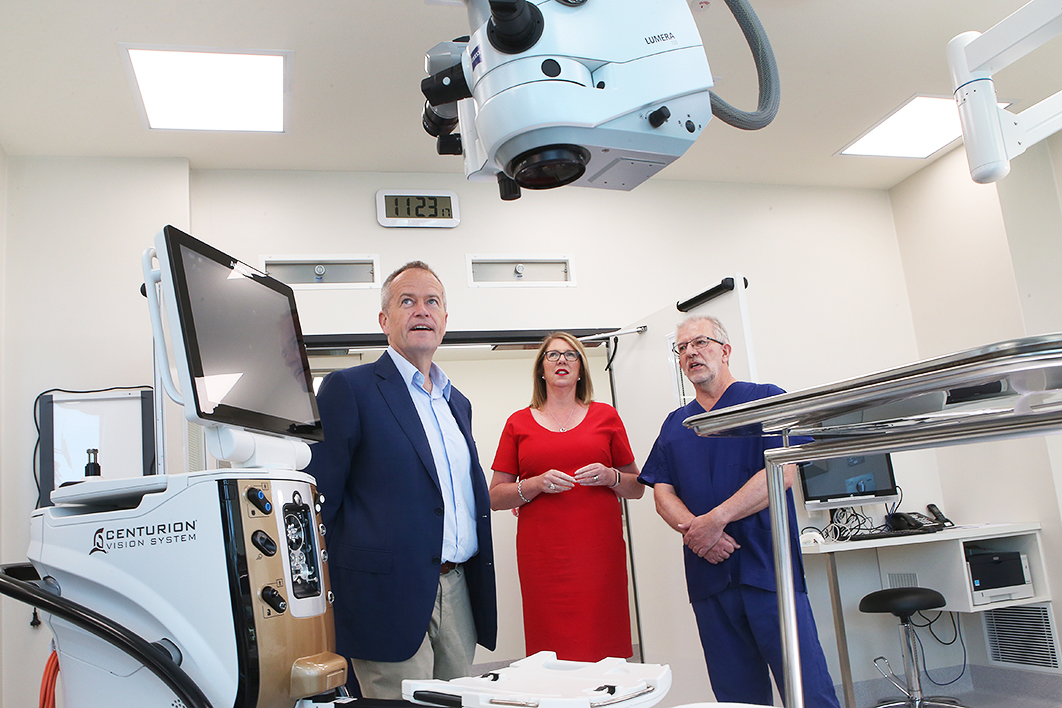 On message: opposition leader Bill Shorten (left) and shadow health minister Catherine King with surgeon Grant Snibson during a visit to Vermont Private Hospital in Melbourne in February last year, when they announced that private health insurance increases would be capped at 2 per cent for each of the first two years of a Labor government. David Crosling/AAP Image

Labor’s pledge to establish an independent Health Reform Commission says much more about the politics of health than it does about Labor’s policy agenda. According to shadow minister Catherine King, who launched the proposal at a National Press Club lunch this week, this permanent policymaking body would deal with challenges such as chronic disease, cost barriers, hospital waiting times and workforce shortages.

The challenges identified by King are vitally important, of course, but from a policy perspective the commission makes no sense. (The politics are a different matter, to which we’ll return.) After all, an entire federal Department of Health exists to provide the government with advice on the direction of the health system.

One of King’s justifications for the new body is that it can “transcend the short-term political cycle,” with commissioners appointed for five years. Yet the 3500 employees of the Department of Health are already employed outside the political process, and most of them remain in the public service for more than five years. A handful of ministerially appointed health reform commissioners is not going to increase governments’ ability to obtain independent advice on health policy.

King also argued that a new body is required to deal with the many health-related issues that require action outside the health portfolio. It’s certainly true that most of the determinants of health — education, housing, the environment, employment — lie beyond the direct responsibility of the health department. But ways of dealing with these issues already exist. The Department of the Prime Minister and Cabinet has a dedicated health unit, whose role is to oversee the development and implementation of health policies across all portfolio areas, and interdepartmental committees bring together people to work on issues crossing portfolio boundaries.

These processes can certainly be cumbersome, but the current departmental structure is not set in stone. If an incoming Labor government wants to take a more cross-portfolio approach to health, nothing is stopping it from changing bureaucratic arrangements. It’s happened before: governments have combined the health department with others focused on social programs, such as housing and community services, in order to support a more integrated approach to these areas.

If Labor really wanted to shake things up it could take an even more radical approach to dividing up the roles and responsibilities of government. A Department of Equity and Social Justice, for example, could bring together all policy and program areas focusing on alleviating disadvantage. A Department of Wellbeing could integrate economic, social and health policies that promote health and quality of life.

The essential point is that, whichever way the functions of government are divided, barriers will always exist. Carving up the system differently simply shifts those barriers, sometimes in ways that are useful for advancing specific agendas and policies, but doesn’t remove them altogether.

The same is true of action across jurisdictions. In her Press Club speech, King emphasised how the proposed commission would work across federal and state/territory boundaries. Again, she rightly says that dividing responsibilities for health between federal and state/territory governments creates inefficiencies and is a significant barrier to reform. But it is far from clear how the proposed commission would transform that situation.

The new commission would take direction from the Council of Australian Governments, or COAG, but King didn’t describe how it would differ from existing structures under COAG, such as the Australian Health Ministers Council and the Australian Health Ministers Advisory Committee (and subsidiary committees that feed into them). These bodies are dedicated to bringing all jurisdictions together to work on matters of joint concern.

Progress on these issues is so slow not because of a lack of mechanisms but because of fundamental differences in the interests of the two levels of government. They have different constituencies, political roles and constitutional responsibilities, and a new federally funded and federally run health commission won’t change that.

The real problem is not a lack of independent health policy advice. Governments and oppositions have access to numerous sources, both within the public sector (not only from relevant departments but also through processes such as Productivity Commission inquiries) and outside it (from groups such as the Consumers Health Forum). The problem is that this advice is routinely ignored.

As the Daily Telegraph’s Sue Dunlevy put to King at the National Press Club, “Why do you need this new body? You already know what you need to do. Can’t you just do it?”

King gave a confident response, arguing again that a “long-term” and “complex” issue like health reform lies outside the normal scope of governments and their departments (although the two examples she cited of previous Labor health reform successes — the Pharmaceutical Benefits Scheme and Medicare — were both achieved by federal governments working within the usual government structures and processes.)

The real reason Labor can’t pledge to simply go ahead and implement the reforms it (and the rest of the health sector) knows to be necessary has nothing to do with policy complexity and everything to do with avoiding conflict with powerful interest groups in the lead-up to the election. Labor knows that a campaign focused on health issues works to its advantage. The Coalition learnt its lesson in 2016 and has carefully avoided handing Labor another “Mediscare” opportunity, but even without Coalition blunders Labor has a strong home-ground advantage when it comes to health.

This advantage is clearest when the election campaign focuses on the public health system and the big-ticket funding programs, such as Medicare and the PBS, that Labor politicians remind us (frequently) were Labor initiatives. Once the debate shifts — to private health insurance, for example — Labor is on shakier ground. If the Coalition can engineer concerns about the impact of a Labor government on the cost of insurance, or if a powerful interest group, such as the Pharmacy Guild or the Australian Medical Association, starts campaigning against Labor, the playing field becomes much more even. That is why King can’t allow the slightest whiff of uncertainty about Labor’s commitments in these areas.

Labor’s health campaign brief is clear. From now until the election we will hear King and her colleagues talk up the need for health reform and emphasise their rock-solid commitment to Medicare and a universal health system. Simultaneously, they’ll try to shut down any discussion of what stands in the way of the necessary reforms — namely, the multibillion-dollar subsidy for the inefficient private health insurance sector; an episodic, medico-centric fee-for-service payment system that sets no limit on charges; and funding agreements that protect providers at the expense of consumers and the community.

Politically savvy stakeholder groups like the Consumers Health Forum and the Australian Healthcare and Hospitals Association understand this agenda, and their support for the proposed commission reflects their general belief that Labor is a much better bet than the Coalition on health.

They realise that putting too much pressure on Labor to talk about controversial issues, such as the Pharmacy Agreement, could backfire by jeopardising a likely win at the next election. After all, it doesn’t matter how good Labor’s election policies are if it never gets to implement them.

So Labor’s Health Reform Commission needs to be seen in terms of its political rather than policy role. In those terms, it may make some modest contribution to progressing health system reform.

First, it signals to health groups and the community that health reform is very much on Labor’s agenda. Even if the details of these reforms are hazy, it sends a message that change may be on the horizon.

Second, it could offer a Labor government a more palatable way of taking on vested interests. It might allow a minister to point to an authority outside his or her department when making tough decisions (“It’s not me who wants to reduce your funding — it’s ‘the commission’”) and to share the blame around when the inevitable backlash follows.

Third, the processes of the commission might be more transparent than what happens within the department, which makes the need for health reform more visible and therefore more saleable. Part of the barrier to progress on health reform is that the groups with something to lose from proposed reforms are more vocal and focused than those with something to gain. Commissioners may have more capacity than bureaucrats (and more credibility than politicians) to take a public role in selling the changes to a cynical public.

The significance of these factors will depend on things like the public profile of the commission, the individuals involved and how roles are defined by government. But even small advantages like these could shift the boundaries of the health debate enough to give an incoming Labor government the confidence to take on vested interests and advance a long-term health reform agenda. (A two-term margin on election day would also help.)

Ultimately, though, the value of any advisory body rests on the willingness of government to accept the advice it provides. It’s on this point that the proposed commission’s prospects of success look doubtful. Both sides of politics have form when it comes to ignoring advice about how to promote the interests of health consumers. Just ask Productivity Commissioner Stephen King, who spent two years reviewing the pharmacy sector only to have his recommendations virtually ignored by both the Coalition and Labor.

In fact, the pile of ignored reports advising of needed changes within the health system could keep any incoming government occupied for decades. In the end, no new body can protect a government from the political risks of trying to move our health system from one dominated by sectional interests to one oriented to the needs of consumers and the community.

Labor’s proposed Health Reform Commission won’t change this situation but at least it could provide a bit of cover for a government prepared to take these risks. •

Jennifer Doggett is Chair of the Australian Health Care Reform Alliance and an editor of Croakey. 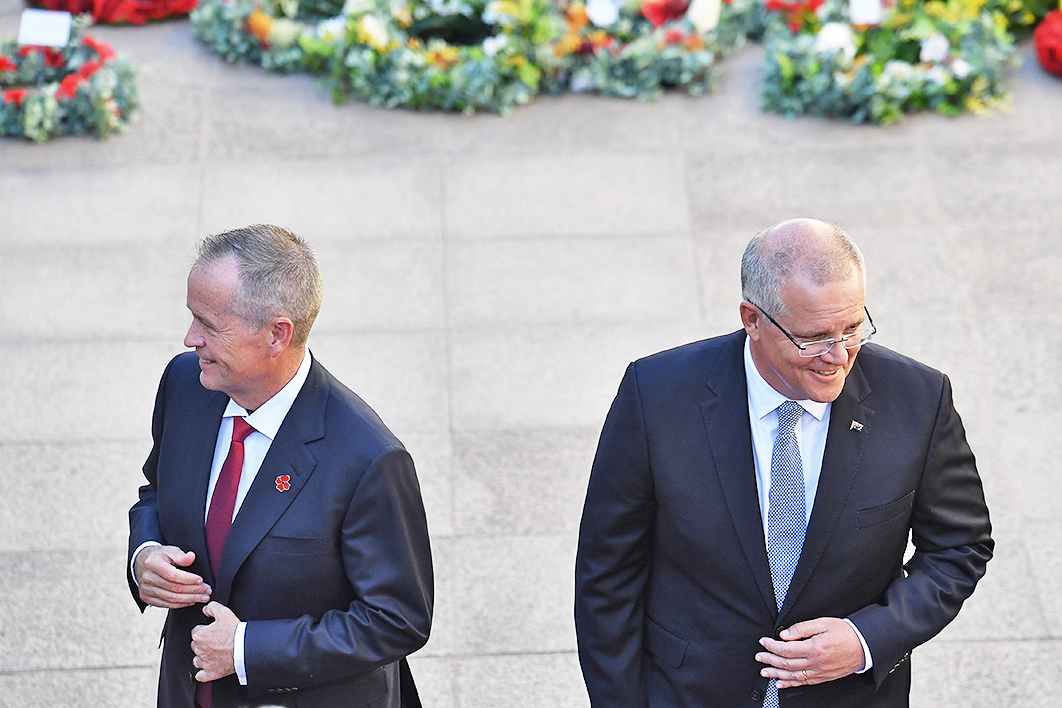