Labor’s response to the Coalition’s argument that it was profligate during the financial crisis has been disastrously inept, argues Peter Brent

Getting away with it: Tony Abbott and Kevin Rudd during the second Sky News People’s Forum in Sydney last Wednesday.
Lukas Coch/ AAP Image 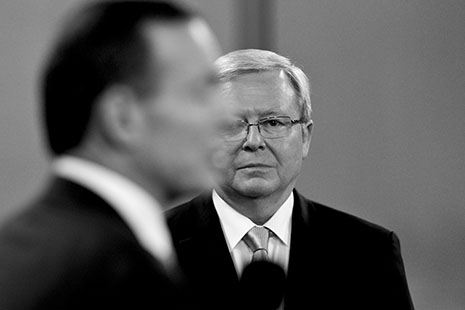 Getting away with it: Tony Abbott and Kevin Rudd during the second Sky News People’s Forum in Sydney last Wednesday.
Lukas Coch/ AAP Image

IT’S FAIR to say most Australians are not terribly excited by the idea of Tony Abbott becoming prime minister next week. And it’s likely that a majority believe Kevin Rudd’s warning that harsh economic medicine will follow a Coalition win on Saturday.

But they’re telling opinion pollsters they intend to vote for Abbott regardless, and the reason, the underlying driver, is that most Australians believe government spending is out of control. They think Labor, under Rudd and then Julia Gillard, has been reckless with taxpayers’ money. They think that all those tens of billions of dollars in deficits, adding up to hundreds of billions in debt, are putting the country’s future prosperity, perhaps even its viability, at risk.

In other words, most voters have bought the Coalition’s “debt and deficits” narrative – that phenomenally powerful political tool that has buttressed every complaint about the government. Allowing this view to take a firm hold in the public mind has been Labor’s biggest political failure over the five years since the global financial crisis swept the world.

It didn’t have to be that way. When the Rudd government followed Treasury’s advice to “Go early, go hard and go households” in late 2008, the prime minister’s sagging standing was rejuvenated. But after he announced further stimulus the following year, the innately timid Rudd and his perpetually petrified treasurer Wayne Swan allowed the fiscal story to get away from them.

They dodged and weaved and tried not to talk about it. Into this vacuum leapt a gleeful Coalition with dramatic stories of fiscal irresponsibility. It told these tales with aplomb, and colour and movement, reeling off seemingly enormous figures.

Under Julia Gillard the government fared no better, but then she, too, was stuck with Swan as treasurer. The least convincing senior politician in any major party, Swan is the unsung villain of both the Rudd and Gillard governments.

When Rudd returned to the leadership with a brand new treasurer a little over two months ago, he moved straight to debt and deficits, challenging Tony Abbott to a Press Club debate. Now it was Abbott who evaded, who didn’t really want to talk about it. It was a clue to the fragility of the whole edifice. A forceful, determined campaign by the government against those accounts of fiscal deterioration had the potential to rip apart the Coalition’s most powerful weapon.

But after fronting the Press Club, alone, with a few graphs, Rudd seemed to think his work was done. Since then he has run a stock-standard campaign. And in the final week, any undecided voters who tuned in to Monday’s Q&A on ABC1 hoping to hear from the prime minister an unequivocal acknowledgment of the fundamental importance of accounting for every expended taxpayer dollar were left unsatisfied. Rudd’s instinctive tentativeness is enough to sustain voter suspicion that Labor is blasé about government spending.

The government’s argument about debt, that it is low by international standards and, besides, the country has a triple-A credit rating, has made little impression because most Australians believe it’s due to the responsible management of the Howard government. The other prong of the government’s defence, that if we hadn’t gone into deficit then Australia would have experienced a recession, is incomplete and in some ways counterproductive, implying as it does that it had a choice about going into hock.

It didn’t. The facts, stripped of complexity, are these. During and after the global financial crisis, thanks to collapsing tax revenue and increased expenditure, central governments in developed countries around the world experienced turnarounds in their budget positions of similar magnitude (as a percentage of GDP) to Australia’s. Some (New Zealand and Canada, for example) moved from surplus to deficit and others (the United States and Britain) from deficit to larger deficit.

Politically, Key’s early years as prime minister were similar to Rudd’s, with sky-high approval ratings. But unlike Labor in Australia, his government was re-elected in a landslide in 2011. He and his government remain politically robust, despite accumulating tens of billions of dollars in debt. Don’t New Zealanders care about government debt?

In Australia, the Coalition claims, or implies, that it would not have gone into the red over the last five years. But that’s easy to disprove, courtesy of the former Coalition government’s own figures. Peter Costello’s final budget, presented in May 2007, overstated government revenue (including GST) across the four-year forward estimates by more than $80 billion. He wasn’t fiddling the numbers; he and Treasury simply didn’t anticipate the GFC. The shortfall created by world conditions was more than enough to drive the budget into deficit without an extra dollar being spent.

This is the context missing from Rudd and Chris Bowen’s defence of their economic record: budget turnarounds in other countries and what would likely have happened under a Coalition government.

Economists will argue about how large a deficit was necessary, but one in the tens of billions was inevitable. And politically, $50 billion may as well be $30 billion or $20 billion, a huge number to the swinging voter and evidence of Labor’s reckless spending. The Coalition can’t believe it got away with its counterfactual argument, and is laughing all the way to the ballot box. •

Peter Brent is a Visiting Fellow at the ANU and blogs on electoral matters at Mumble.

A real League of Nations team

Photo from George Voulgaropoulos’s Behind the Veil series, “a glimpse into the lives of the next generation of Australians living in Sydney’s western suburbs.” 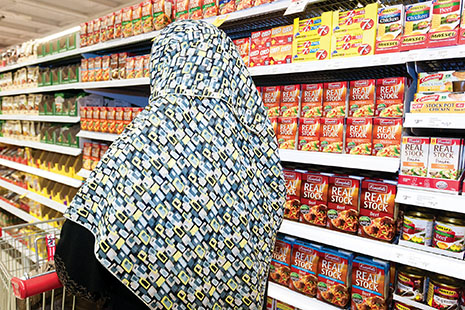 Photo from George Voulgaropoulos’s Behind the Veil series, “a glimpse into the lives of the next generation of Australians living in Sydney’s western suburbs.”