Paralysed leader or bad advice? Stephen Mills reviews a new account of the Rudd–Gillard government and what it says about the party’s future 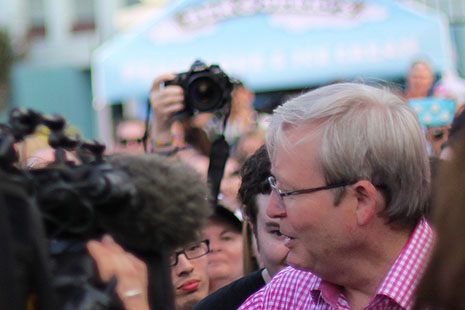 Rudd, Gillard and Beyond
By Troy Bramston | Penguin Special | $9.99

Troy Bramston’s readable quickie sets out to advise the leadership of the Labor Party on how to avoid the disasters that befell the Rudd and Gillard governments. It summarises the policies of these governments and their murderous internal politics, and presents a range of suggestions – some Bramston’s own, some channelled through former prime ministers Gough Whitlam, Bob Hawke and Paul Keating – about how to “rebuild” the Labor Party so it can, one day, return to office.

Rudd, Gillard and Beyond thus joins a teetering tower of titles dealing with various aspects of what went right and what went wrong between 2007 and 2013. Already more than a dozen books have been written by frontbenchers (Chris Bowen, Jim Chalmers, Maxine McKew, Andrew Leigh, Lindsay Tanner, and Carrs Kim and Bob) and pundits (Barrie Cassidy, Peter Hartcher, Jacqueline Kent, George Megalogenis, Aaron Patrick, Anne Summers, Kerry-Anne Walsh), and more are on the way.

Bramston’s book coincides with the arrival of Philip Chubb’s forensic take-down of Labor’s carbon pricing scheme. Julia Gillard’s memoir is en route, as is Wayne Swan’s, though the Rudd entourage is apparently content to provide background briefings without committing to an authoritative version of events. It was in this crowded field that Bramston, a News Limited journalist and former Rudd staffer, found himself with both an opportunity and a problem.

The opportunity was that someone – who? – leaked him an email Gillard wrote to Rudd and his chief of staff Alister Jordan just a few days before her challenge. This is Bramston’s scoop. Gillard tells Rudd she is “desperately concerned” about the government’s lack of progress on asylum seekers, and sets out in detail the stuttering efforts of the prime minister’s office to address it. It rings oh so true. Gillard was clearly aware of the government’s problems and on the evidence of this email was trying to fix them; this is not, by itself, evidence of a leadership challenge or conspiracy.

The problem for Bramston is that Gillard chose not to be interviewed for this book, leaving a hole in his sequence of prime ministers and leaving him victim to Rudd’s one-sided critique of his deputy. Thus, in narrating the critical events after the failure of the UN conference at Copenhagen, Bramston asserts:

Rudd believed he could win an election in late 2010 and increase the government’s parliamentary majority. After he ruled out an early election, he was urged to dump the [Carbon Pollution Reduction Scheme] by Gillard and Swan, and the scheme was shelved in April 2010.

In the same uncritical vein, he quotes Rudd nominating his two “errors of judgement” as:

One is to have succumbed to the council [sic] of others to defer the emissions trading scheme rather than have the opportunity to explain to the Australian people how we would handle it in a second term. The second is to have been such a trusting bastard.

Compare this self-image of a trusting PM let down by his deputy and treasurer with the altogether more critical, detailed and nuanced analysis in Phil Chubb’s book. Chubb, who interviewed many of the participants including Gillard (on the record) and Rudd (off the record), describes a different post-Copenhagen Rudd: a prime minister “paralysed by indecision,” “agitated and angry” and hampered by “chaotic” work habits, at one point suffering a “meltdown” like a “debilitating panic attack.” Far from wanting to explain carbon pricing to the Australian people in 2010, he embarked on a frantic, pointless and endless tour of national hospitals during which the CPRS was abandoned rather than deliberately dropped. “Kevin Rudd,” Chubb concludes, “was the architect of his own defeat.” By the time Gillard sends her email, in other words, the prime minister was already incapable of responding strategically to her alarm bells.

So Labor’s history wars roll on, robust, sometimes nasty, and inconclusive. Either there was a loyal deputy trying methodically to rescue a paralysed leader, or there was a strategic leader who received bad advice, was denied the opportunity to press on with carbon pricing and was brought down by a plot. Bramston hasn’t been able to resolve this dilemma.

But it’s important to resolve. Bramston concludes his book by recommending organisational reforms to Labor’s candidate selection, national conferences, branch membership, trade union participation and so on. But if Labor imploded because of the personal psychological weaknesses of the leader, which is essentially Chubb’s thesis, then all of Bramston’s sage advice is irrelevant; indeed, the party may need greater not less opportunity to replace leaders who are underperforming or out of control.

Bramston’s account is strong on the inner workings of the parliamentary party and some of its factional manoeuvring. A pro-Gillard group under Rudd apparently dubbed themselves “Knights Templar,” while a pro-Rudd group under Gillard called itself the “cardinals.” Bramston records all this without exploring how such silly, self-regarding play-names might possibly be reconciled with the serious obligation of members of parliament to serve the people. In fact, the people get short shrift in Bramston’s account, except as numbers in voting intention polls; apparently rebuilding the Labor Party is a top-down process, and bottom-up pressure groups such as Open Labor or articulate factional voices (such as the Left’s Challenge magazine) have no role. Likewise, the Rudd–Gillard drama appears to have taken place without reference to the role of the media in promoting, exaggerating or selectively reporting leadership instability and policy failures.

Looking to the future, Bramston argues that Labor needs to “return to the mainstream centre” with a new policy agenda. Bill Shorten must learn the lessons of defeat and not get “trapped” into “defending policies that failed or were deeply unpopular.” But did Labor in government fail because it was too far off to one side? Carbon pricing was the mainstream in 2007, as the rapture that greeted Rudd’s signing of the Kyoto protocol shows. Climate change denialists are not in the mainstream; they are extremists. On border protection, Labor’s problem was that it veered too much to the centre of the road in pursuit of those tough-minded voters from western Sydney – a “mainstream” position that allowed Labor to be perpetually outflanked to the right by the Coalition and to the left by the Greens.

In tactical terms alone, Labor might be better off hanging tough on carbon pricing, softening its border protection position to fend off the Greens, and defending its health and education credentials at the expense of the Coalition. The post-budget polls underline the policy dilemma. Labor’s primary vote has crept back ahead of the Coalition’s – an astonishing turnaround so soon in the electoral cycle, perhaps repudiating the narrative of the last six years in which Rudd and Gillard were said to have lost Labor’s heartland. At the same time, however, Labor’s comfortable two-party preferred lead must be read against the startling fact that minor parties (Greens plus “others”) now attract fully 25 per cent of the electorate. This is the existential crisis facing both Labor and the Coalition: have they lost a quarter of the electorate for ever? The only upside for Bill Shorten is that at least he is in opposition, a safe haven in which he can get his and his party’s act together. •

Stephen Mills is a lecturer at the Graduate School of Government at the University of Sydney and a former speechwriter for prime minister Bob Hawke. His book The Professionals: Strategy, Money and the Rise of the Political Campaigner in Australia is to be published by Black Inc. Books in July.