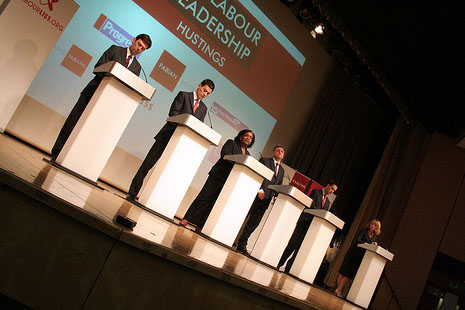 IF SHEER physical endurance is one of the qualities most needed in a modern political leader, then the British Labour Party has surely devised the perfect method of selecting its candidate for the top job. In the wake of Gordon Brown’s resignation in May, fifty-six leadership “hustings” are being held all over the country in the months leading up to the September party conference, when the identity of the new leader will finally be revealed. The speed and efficiency with which Labor in Australia recently dispatched Kevin Rudd must have puzzled anyone here in Britain who happened to notice; it was just as puzzling for me to witness the main British opposition party spending almost five months — at a time when a new government is making decisions with far-reaching consequences — without a permanent leader. (Harriet Harman, the acting leader, is not a candidate for the leadership itself.)

So what’s the purpose of this marathon? Since 1981, the British Labour Party leadership has been determined not by parliamentarians’ votes alone but in a popular vote involving three groups: Labour members of the House of Commons and the European parliament; constituency party members; and members of affiliated organisations, primarily trade unions. The hustings meetings provide an opportunity for Labour folk to see the candidates in the flesh, question them, listen to their answers — and perhaps imagine how each might fare in a less friendly interrogation by interviewers like the BBC’s John Humphrys or Jeremy Paxman. The main feature is a series of questions from the floor, to which the candidates give one-minute replies in turn, followed by a two-minute address from each at the end.

Labour-supporting Guardian columnist Polly Toynbee recently called it a “miserable process” in which the rigid format “sucks all oxygen out of debate.” Is she right? Ticket and photo ID in hand, I hopped on a 6.36 am train from Euston on a recent Saturday morning and made my way to the great northern city of Manchester to see how this exercise in labour movement democracy works. The venue was a large hall in New Century House, our host was the Cooperative Wholesale Society, and Clive Tyldesley, the football commentator, was our chair.

Tyldesley set the mood by suggesting that Labour seemed to have lost its way some time over the past thirteen years. None of the candidates would have dared demur, but it’s also true that each stands in a slightly different relationship to the New Labour legacy. Of the five, David Miliband — as author of the party’s 1997 election manifesto and formerly Blair’s chief policy adviser — is the most securely entangled in the project; Diane Abbott, a left-wing critic of many of its key directions and decisions, is best able to distance herself from it. The two Eds — Balls and Miliband — are former Brownites who find it easier to make the case that New Labour went too far in embracing the market than to explain what they or their patron were doing when the bankers ran riot. Andy Burnham, on this occasion at least, was local lad made good. The former health secretary grew up in Manchester and received an especially enthusiastic reception partly for that, and partly because his occasional criticisms of the fashionable London dinner-party set who allegedly run New Labour resonate among party members up north.

The audience questions — a selection from those submitted in writing when people arrived — wandered over much of the territory you’d expect: government debt, health, university fees, Britain’s relationship with the United States, what to do about the Trident missile system, how to win back voters who’ve swung to the Conservatives and Liberal Democrats, how to get more women into positions of authority in the party. There was the usual talk of making the banks more socially responsible. One local councillor asked which Labour policy each of the candidates would “consign to Room 101” (a reference to the unlucky fate of some characters in Orwell’s Nineteen Eight-Four) and which they’d make a priority — a good question that elicited answers such as Abbott’s belief that railways should be brought back into public ownership and Ed Miliband’s call for a living wage. But more than one candidate wanted to consign the abolition of the 10p tax rate to Room 101, a cop-out that fixed the blame on Brown without really saying much about where they wanted to take the party. The final question came from a man named Cyril who’d clearly seen a few Labour leaders come and go in his time. He asked the candidates whether they would give assurances that the back-biting, leaking and character assassination that had so marked Labour’s thirteen years would come to an end. (They all obliged.)

The contest is essentially between the Miliband brothers. Ed has gained the backing of key unions, and naturally made much of that support in Manchester. He seems to be the Labour traditionalists’ candidate and — presumably to emphasise this “man of the people” status — he identified himself as part of the “Labour tribe” and came down from the stage and into the audience to make his final address. One area in which he is seeking to place as much distance between himself and New Labour is civil liberties, which he says should be made a priority by a new leader.

Big brother David, by way of contrast, seems to want to keep a bit of distance between himself and the rest of the tribe. “There’s nothing socialist about a deficit,” he said in reply to the first question of the day — to which the unkind might add that there’s nothing much socialist about David Miliband, either. He’s raised vastly more money for his leadership bid than the other candidates — yes, this is a kind of US presidential election in miniature, in which individual candidates attract donors in support of their leadership bids. The former foreign secretary said he was proud of having attracted strong financial backing, and of putting it to work for grassroots Labour organisations. His pitch was that the party needed someone who could ensure that their 2010 defeat was not followed — as defeat had assuredly been followed in 1931, 1951 and 1979 — by long periods in the wilderness. Labour had to win back seats in southern England; the party needed a credible alternative prime minister who could fire the enthusiasm of both party and public — like Blair had, though Miliband didn’t say so. A rare reference to the ghost that haunts every Labour banquet came in his remark that “the worst thing that ever happened to Tony Blair was George Bush.”

The handsome and articulate David Miliband, of course, looks and sounds like many people’s idea of a national leader; just as Diane Abbott, although no less articulate if much less formal in her style of address, makes a virtue of confounding conventional expectations on account of being black, female and radical. But there was little obvious emotional connection between the elder Miliband brother and his audience. His website pointedly refers to his boyhood love of football and his education at a Leeds comprehensive, but as a policy wonk and the son of a Marxist academic, he closely conforms to the kind of London-based intellectual and political insider who is especially out of favour among the party faithful. Strangely for such an otherwise polished operator, he also seems to lack the facility for hiding that boredom that all politicians must endure as a small part of the price of democratic politics. It’s a forgetfulness that your audience — and the cameras — are always watching, or might be, even when you’re not talking (a foible, incidentally, that possibly helps explain his embarrassing tangle with a banana at a Labour Party conference a couple of years ago).

So is the hustings debate as bad as Toynbee suggests? She has a point when she says that the format doesn’t really allow for the development of much “cut and thrust” between the candidates. It was all very polite, with all candidates going out of their way not to criticise the others. Only Abbott stepped a little outside this consensus, but even she used humour to take the edge off her occasional pointed references to the suited gentlemen seated next to her. Aggression would in any case have been out of place at a meeting with the local tribe after the feral relationships between New Labour leaders have been blamed for much that went wrong with the last government.

And, as far as I could see, this part of the Labour tribe appreciated the occasion in a low-key, northern sort of way. •