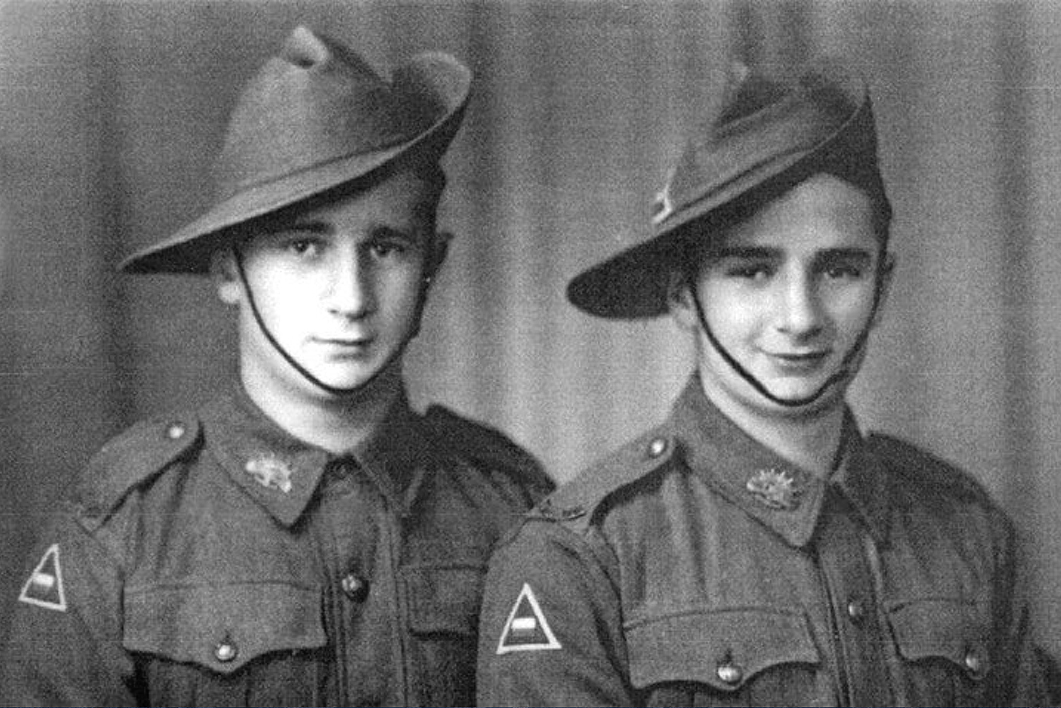 The last of their unit: Jack (left) and Bob Chapman. Peter Chapman

Bob Chapman and his brother Jack enlisted together with the Second AIF at Sydney’s Moore Park showgrounds on the same day, 15 April 1941. They were allocated consecutive service numbers: NX72914 and NX72915. Their brother Colin joined the infantry and fought in New Guinea.

Jack would recall that the mothers of service personnel were issued with little brooch badges by the government: “On the badge was a star to show you had a son or daughter in the war. My mother wore one with three stars. She was very proud.”

Jack and Bob trained together with the 8th Division Signals, sailed together to Malaya, and fought and were captured together when Singapore fell to the Japanese in February 1942. Later that year, they were shipped to Nagasaki with “C Force,” the first of more than 3800 Australians sent to work as slave labourers on the Japanese mainland.

The Chapmans were initially deployed at the Kawasaki Shipyard in Kobe, before much of the city including the shipyard was destroyed in the US air force’s firebombing raids in 1944. They were then transferred to the infamous Yoshikuma coalmine in Fukuoka and forced to work in deadly tunnels miles underground.

The brothers would both credit each other’s support as the main reason they survived three years in captivity and made it home to Australia in 1945. Bob had a particularly vivid memory of one day at the shipyard in 1943: “Our job was fitting steel sheets to the side of the boat frame using big bolts and big spanners. If you stripped a bolt, it was easy to lose your balance… One time I was working high up on the side of the boat and Jack slipped. I reckon he was on his way down and would have gone if I hadn’t grabbed him and held him. If I hadn’t been there that day, he would never have made it.”

Bob Chapman died on 18 October, five years after Jack, at a nursing home in southern Queensland. He was 101. His death claimed the last of the signallers who had lived through the trials of Kobe and Fukuoka. And now the 8th Division Signals Association, which once had hundreds of active members, has just two veterans left.

When Alec Campbell, the last of the Anzacs who fought at Gallipoli, died in May 2002, it was a moment of national sadness and reflection. Campbell, who lied about his age to enlist at sixteen, had said of himself, “I don’t feel special. I am an ordinary man.” But prime minister John Howard attended his funeral, eulogised him and spoke of “the respect we feel and the debt we owe to this grand old man and those he came to represent.” Howard rightly observed that the child soldier who lived to be the oldest of his era had “shouldered the weight of history imposed upon him.”

Now, just two decades after the last Anzac departed, Australia is rapidly approaching the moment when the last veterans of the second world war will be gone.

Close to a million Australians served in that conflict. Now the youngest of those who enlisted before the war finally ended must be at least ninety-five years old. How many are still alive remains a mystery, even to those charged with their care and support.

Fewer than 3700 individuals who served during that war currently hold Department of Veterans’ Affairs healthcare cards — gold for those who went overseas and white for those who served at home. The number has plunged from about 23,000 in 2017 and 13,300 in 2019. The department estimates hundreds more surviving veterans may not have enlisted for the health support, although it is hard to imagine that many would have failed to apply for the substantial assistance.

Beyond the health card numbers, Veterans’ Affairs appears to be hopelessly uninformed about the men and women whose support in their final years should be its highest priority. It can’t give a breakdown of how many surviving veterans served in the army, navy and air force. And it refuses not only to identify the youngest and oldest surviving veterans but even to indicate their age, for “privacy” reasons.

The RSL also struggles with its roll call of those who ought to be the most venerated of their ranks. The NSW branch lists 694 surviving second world war vets among its members but says the statistics from its sub-branches are unreliable. The RSL in the ACT has twenty-one. RSL Tasmania thinks it has nineteen but is not sure. RSL Queensland counts 609 but says it may be unaware of a number of listed life subscribers who are no longer alive. Repeated requests drew a blank from other state branches.

The rapid thinning of the ranks of second world war veterans is being felt keenly across the hundreds of unit associations formed after the war, many of which have been forced to wind up over the past few years. Among those that have gone is the 467–463 RAAF Squadrons Association, which represented veterans of the two Australian Lancaster bomber squadrons that suffered among the highest casualty rates of the war in Europe and whose members took part in some of the most famous raids, including the sinking of the German battleship Tirpitz in late 1944.

Along with the Kokoda Track campaign in New Guinea, the siege of Tobruk in 1941 remains one of the most celebrated Australian achievements of the second world war after the Allies held off the German and Italian armies for 241 days in the Libyan port. When the Nazi propagandist Lord Haw-Haw derided them as “rats in a trap,” the 14,000 Australians who fought at Tobruk embraced the label as a badge of honour.

The Rats of Tobruk Association soon had a membership of about 3500 after its formation in 1945, including “water rats” — the Royal Australian Navy personnel whose ships gamely helped to keep Tobruk supplied during the siege. Now there are just four Rats still clinging to the sinking ship of our ranks of veterans — three in Victoria and one in New South Wales. All of them are centenarians, the oldest 106. Nine of their comrades died during the past year.

But while the numbers of veterans are rapidly dwindling, the Rats of Tobruk Association still has a national membership of about 600 consisting mainly of the family and friends of departed veterans. The association’s Victorian secretary, Lachlan Gaylard, says there is still a strong desire among the descendants of veterans and those who knew them to keep alive the memory of their deeds. “We also see signs that there is a hunger in the wider community, especially amonsg younger Australians, to learn more about this history,” Gaylard says. “It is a part of our history that schools don’t do enough to celebrate.”

Perhaps the most tangible legacy we have of those who have gone and those who remain is the priceless archive of service records and enlistment photographs of those Australians who served in the second world war. More than seventy-seven years after the war ended, though, hundreds of thousands of those records are still locked away in crumbling paper folders in a Canberra warehouse largely inaccessible to the general public.

While the digitising of all first world war personnel files was completed in 2010 — enabling them to be readily and freely viewed online — the task of digitising the files from the second world war has been excruciatingly slow.

The National Archives of Australia holds 1,169,199 personnel files documenting the service of Australian men and women in the army, air force and navy during the second world war. So far, less than two-thirds have been digitised. Those who wish to see any of the undigitised files must book a private viewing at the NAA’s Canberra offices or pay a $36 fee to have them copied — and even then wait up to ninety business days to see the results uploaded onto the NAA website. More than 14,460 people have so far paid rather than wait.

Two years ago, the NAA announced the signing of contracts worth $4.4 million for the bulk digitisation of remaining service files. The then NAA director-general, David Fricker, declared, “The World War II service records are among the most popular in our vast collection and this project will ensure Australians can access almost one million of those records digitally by 2023.”

Two years on, just half of the remaining records have been copied, and the NAA says it does not have enough funding to complete the job. It says the $10 million allocated by the federal government in 2019 for the work is not enough to cover the cost of digitising photos of personnel in the service files or to copy more than 100,000 outstanding files. “It’s a shame, it’s a real shame that this may not be done before the last of these veterans has died,” says Lachlan Gaylard.

While the NAA appeals for private donations to help meet the cost shortfall, $500 million is being lavished on the Disneyfication of the Australian War Memorial (after the scandalously wasteful decision to bulldoze the fabulous Anzac Hall — home of Lancaster bomber “G” for George — to make way for the structure).

Engraved in stone at the entrance to the War Memorial is a quotation from its founding father, the war correspondent and official historian Charles Bean: “Here is their spirit, in the heart of the land they loved; and here we guard the record which they themselves made.”

What Bean would make of the architectural extravaganza transforming the imposing yet modest shrine he helped build is anyone’s guess. But there can be little doubt what the man who was also foundation chairman of the 1940s war archives committee that would become the National Archives of Australia would think of the failure to complete the proper preservation of records of the men and women who fought in the second world war. •

Mark Baker is publisher of Inside Story. His latest book is The Emperor’s Grace: Untold Stories of the Australians Enslaved in Japan in World War II (Monash University Publishing).