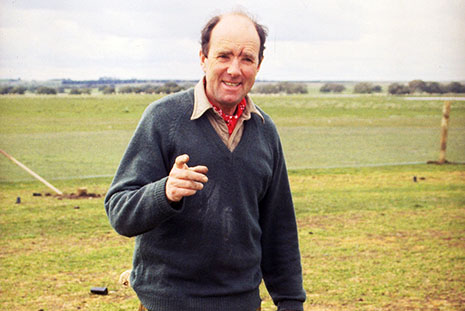 Conventional farming is too costly, says John Fenton (above).

The Untrained Environmentalist: How an Australian Grazier Brought His Barren Property Back to Life
By John Fenton | Allen & Unwin | $35

“THE INVADERS hated trees,” wrote historian W.K. Hancock in 1930. This blunt sentence summed up settlers’ attitudes to the Australian environment across the continent. Landholders paid itinerant labourers to ringbark, grub-out and clear over twenty million acres by the 1890s; a hundred years later we were still clearing a million acres a year. According to Geoffrey Bolton, in his 1981 classic Spoils and Spoilers, “the main enemies of Australia’s trees were the pastoralists.” Many theories drove the desire to rid the landscape of standing vegetation – the dominant one, and one that persisted long into the twentieth century, was the assumption that more cleared ground meant more pasture growth. This cultural and environmental legacy is the context for John Fenton’s story and the transformation of his bleak and windswept grazing property, Lanark, into a biologically diverse working farm that integrates conservation with production.

The Fenton family first received widespread attention in 1997, when ABC’s Landline program went to Victoria’s Western District and flew a helicopter over their property. Aerial footage showed a thriving, tree-studded property rich with pasture and teeming with birdlife. Its 700 hectares even included a large lake, wetlands and a wildlife reserve. The contrast between Lanark’s green fields and the neighbouring properties’ barren and parched paddocks was stunning visual proof of the success of Fenton’s approach. The before and after pictures were certainly impressive, but it was the contrast across the fencelines that provoked a burning question – why weren’t other landholders doing the same? And, in part, that’s what this book is about.

When John Fenton inherited Lanark in 1956 it had been managed like most other Australian properties – cleared of its vegetation and overgrazed. Why did he decide to start planting trees? “I may have simply been reacting to the fact that the property looked so bare and desolate,” muses Fenton. He doesn’t know for sure, and the narrative becomes a search for answers to this question. It is a story of how Fenton achieved the transformation, and of his attempt to understand why. Shaped by the changing ecology of the farm, it is as much Lanark’s autobiography as it is a memoir of the farming practices Fenton and his wife Cicely introduced.

The early chapters form a family history, the archetypal Anglo-Celtic immigration story of drunks, gold-mining, small businesses and property deals. This section reads like something you might find in the local studies collection of a regional library, and not all readers will care to know John Fenton’s father’s batting scores in his two innings for the Hamilton district team’s clash with a touring English side, but there are good reasons why this material is included. Collected facts such as the cricket scores are all John Fenton can find out about his father, who died when young John was nine years old. His only clear memory of his father is planting trees with him; perhaps this experience is another factor influencing Fenton’s decision-making.

Another important reason why a family history is included is that Fenton wants the book to appeal to farmers. Including his family background reveals where he comes from – his class, education, opportunities – and this is important information for other farmers and for the story. Fenton is no “greenie,” does not come from the city, is not wealthy, has no formal higher education, and spent years applying as much fertiliser and pesticide as anyone else. His background is so typical of his peers that other farmers might feel more comfortable about taking on a similar challenge.

As the story of Lanark and Fenton’s work on the farm progresses, with ever more trees, fenced-off areas, natural regeneration and birdlife, and improving soils, increasing yields and windbreaks that double as timber plantations, we learn more about the other influences on his perspective. He reads Aldo Leopold and Rachel Carson. He joins field naturalist societies and gets to know all the local nurseries supplying native plants. He forms friendships with university researchers, soil scientists and foresters, many of whom played their own important roles in the history of conservation in Victoria. Meanwhile, other farmers continue with the same industrial approach that became widespread at the end of the nineteenth century and escalated – encouraged by the wider society – during the twentieth. The Department of Agriculture pushed the use of superphosphate, the government paid subsidies for clearing, and the banks would only support loan extensions if you kept up with the latest industrial methods (Fenton had his loan for the lake approved after describing it as an irrigation project).

By the time Fenton handed over Lanark to his son in the late 1990s he had planted 100,000 trees. With the narrative of transformation complete, the final third of the book becomes a how-to guide that more directly addresses other landholders. Obviously Fenton’s Lanark model could not be applied in every part of Australia, but there are basic details and principles for how one might go about a regeneration project that could be adapted. This part of the book also serves as a platform for Fenton to offer his thoughts on how to prevent further degradation of Australia’s environment in areas where grazing and agriculture are carried out, and here he is addressing his urban readers. Naturally, this is where Fenton will attract criticisms and counter-opinions. His favoured mechanism is a stewardship payment system, even though fencing off land to preserve biodiversity is only part of the approach that he took. Farming practices at Lanark integrated production with care for the health of the wider ecosystem: production was not separated from protection – they happened in the same paddock. That is the profound lesson from the Lanark story.

Fenton’s most compelling argument for a stewardship system is that a small group of farmers control a large extent of Australia’s land and they receive so little money as a result of the way they farm that the rest of society must give them money or they will continue to degrade it. The rest of society is being held to ransom. Fenton’s folksy wisdom, which is insightful and endearing throughout the rest of the book, is inadequate here. A more persuasive argument might have been to point out that governments spent much of the twentieth century encouraging agricultural settlement and advocating an industrial approach to land management. That has left farmers in a situation where they are drawing down natural capital in a high-input, high-cost race for ever-increasing production that will put the environment, and all of us who depend on it, at great risk while hardly benefiting anyone. Australian society helped create the problem, so now it has a responsibility to help improve it.

In these final chapters, Fenton emphasises the cost of his approach and warns farmers against trying anything similar. This contradicts the evidence in the Lanark narrative of incredible gains in productivity, and cuts across his earlier observation that it was the cost of “conventional” farming that in part forced him to try a different approach. It might have been useful to have some rough dollar estimates of the cost of his tree-planting and biodiversity-building program, and the economic return from the wide range of benefits it provided, and a comparison with the modelled costs of continuing with an industrial approach.

Despite the holes in Fenton’s arguments for stewardship payments, a few inconsistencies in his views and some unnecessary barbs at city dwellers and environmentalists, the book does communicate a powerful message about the benefits of taking an ecological approach to food, fibre and timber production. Fenton never proselytises to other farmers – it is more a case of inviting them into a conversation about doing things differently. His writing is unadorned, his story conveyed humbly, and you cannot help but admire his passion. His wonder at and love of the living world is apparent.

At a conference a few years ago at which Fenton was speaking, an audience member asked a question about “EBMPs,” to which he replied, “I haven’t the faintest idea what you’re talking about.” He later found out that it stood for environmental best management practices, and quips, “I am still not completely sure what that means.” Few of us know what it means and what they might be, but stories like that of John Fenton and Lanark are helping us to work it out. •

Cameron Muir is a PhD student in environmental history at the Fenner School of Environment and Society, ANU. He won the 2010 Griffith REVIEW Emerging Writers’ Prize for Non-fiction for his essay, “Feeding the World.”