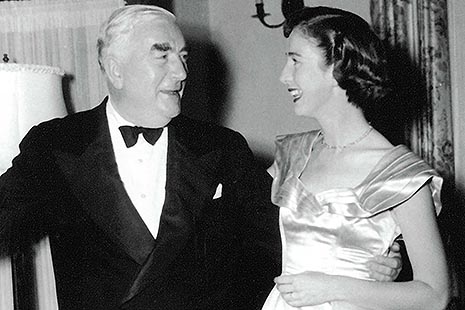 Robert Menzies and his daughter Heather, from the cover of Letters to My Daughter.

HEATHER MENZIES was twenty-one when her father became prime minister for a second time, having won the 1949 election, and she and her parents moved into the Lodge. Tall and slim, she brought a touch of young glamour into the household; in turn, she enjoyed such glamour as Australia’s national capital had to offer, including, of course, the 1953 royal visit. When she married the handsome young diplomat Peter Henderson in 1955, it was the Canberra social event of the year. He was third secretary to the Australian embassy in Jakarta, where they went to live. Her father wrote to her there, as he did whenever she and Peter were posted overseas or when Menzies himself was overseas for lengthy periods after his retirement. Heather has now published these letters in a charming book, Letters to My Daughter. They span a period of twenty years, from the mid 1950s to the mid 1970s, by which time she and Peter were in Manila.

I have called the book charming because there is an intimacy and pleasure in these letters which draws the reader in, no matter what he or she thinks of the politics of the writer. Menzies was not a diarist, except when he was overseas, and those diaries, while interesting, are also somewhat stagey, like a set of prompts for later recountings of the sites seen, people met, events attended. These letters, by contrast, have an immediacy because the person to whom they are written is so fully present to Menzies. They combine news about family and friends with comments about the politics of the day and are addressed to someone he trusts absolutely and with whom he is used to talking about politics. Indirectly, through his comments on Heather’s life, they also give an insight into the demands on a diplomat’s wife: to entertain, to share the social work and, periodically, to shift the household and children across the globe.

Heather was Menzies’s third child, and lived at home the longest. The older two, Ken and Ian, spent a good deal of time in boarding school. Ken married and had a large family; Ian never married and was unwell for much of his life. They are both present in the letters, as are Ken’s children, but neither of the sons was much interested in politics. It was Heather who shared her father’s passion – and knew the details of his political career and beliefs. When she was away he wrote in part to keep her up to date with goings on at home, but also because he missed her a great deal.

The letters reveal Menzies’s close continuing interest in the art of political communication. He continued to value speechmaking, and the capacity of politicians to write their own speeches, and the letters include an interesting account of the process by which he wrote the policy speech for the 1961 election. He is also very interested in the political potential and the pitfalls of the new medium, television. The Nixon–Kennedy debates, he thought, clinched the presidency for Kennedy, though he worried that both men had committed to positions that, if they won, would be hard to retreat from. “The President of the United States should come to office with plenty of room for manoeuvre; with his broad attitudes stated and known, and his general character and ability understood.”

These were early days in televised politics. Menzies had made the first televised Australian election speech in 1963, and he continued to hold press conferences, but he was never subjected to the sort of televised scrutiny that is now regular evening fare. As prime minister he clearly believed he called the shots, and was far too canny to be tricked into ill-considered comments. He had not always been so disciplined, and there were plenty of times during his early political career when his quick tongue got ahead of his political judgement, but by the 1960s he was clearly in control.

Also revealed is Menzies’s deep distrust of the press. “The moment a government set out to try to please the press instead of pleasing its own judgement, it makes itself dependent on its favour, and when the favour is withdrawn the results are very bad.” He is writing here of his perception of his successor Harold Holt’s relations with the press. And he described one-time editor of the Sydney Morning Herald, Angus Maude, as “just a little louse, and it is a louse’s destiny to bite.” Referring to Maude’s review of his memoir Afternoon Light, Menzies wrote, “As you know the Australian journalist has created a legend about me, my arrogance, my unapproachability, my wicked tongue and he hates to find the legend so completely falsified by a book which contains none of these elements at all.”

Heather was in Geneva during Australia’s 1961 “credit squeeze” election, which the Liberals won by only a seat (and then on preferences). Her father’s letters are revealing of the way he read the party’s electoral chances, and also of his own attitudes to office and to the men who might succeed him. He suggests that if the government had been returned with a comfortable majority the way would have been cleared for his retirement before the next election and an orderly handover to a successor. I have long thought that Menzies’s reputation would have been higher had he lost the 1961 election: he would have escaped the fate of being seen as the major impediment to Australia’s modernising its cultural and social attitudes, to race in particular, but also to the British heritage and even to censorship. Had the Liberal Party been able to modernise in the 1960s it would have been harder for Whitlam to win such a substantial section of the progressive middle class for Labor. But the Liberals won the 1961 election so narrowly that Menzies felt he could not risk retiring, and he clearly thought none too highly of the potential successors. Interesting here is his view that John McEwen, leader of the Country Party, harboured an aspiration for the top job – though how he would have got there from his position as leader of the junior partner in the Coalition government is hard to imagine.

Menzies’s comments on his colleagues are generally perceptive. He is sceptical about John Gorton at first, but not overly critical; and he has little time for the two Billies, McMahon and Snedden. By the mid 1970s he sees Malcolm Fraser as the man best suited to lead the Liberal Party forward – as did Fraser himself. There is nothing surprising here. What is somewhat surprising is that he has far less ability to read the men on the other side, “that wretched man Whitlam” in particular, though he seems fond of Arthur Calwell. This inability to read across the political divide is reciprocated. In 1974 Whitlam audaciously invited Menzies to be a member of the appeals committee for a fund to assist in the construction of a new national headquarters for the Labor Party, to be called John Curtin House. The pretext was that it would honour John Curtin. Menzies was somewhat confounded by the request, eventually replying, “I have during all my political life been an opponent of the Labor Party and I think for me to sponsor an appeal for the Labor headquarters in Canberra is more than I can honestly be associated with.” What did Whitlam expect?

Much of the charm of the letters is in Menzies’s obvious pleasure in his family, including the families of his brothers and his only sister, Isobel Green. He is revealed as an enthusiastic shopper, especially for gifts for his family. Many times he mentions the frocks he has bought for Heather on his various overseas trips, the lengths of cloth or items of jewellery. He was also financially generous to his children and grandchildren, making regular and substantial gifts of money. When Afternoon Light became something of a bestseller, his gratification was compounded by the size of the royalties, much of which he distributed to the family.

Menzies loved Heather deeply; she was, he said in one of his last letters, when he was old and sick, “the great unalloyed joy of my life.” Clearly she adored him in return, and the work she has put into the publication of these letters attests to her investment in his legacy. The book will be enjoyed by many who remember Menzies and want to fill out their picture of him. That pleasure will depend, though, on already knowing a good deal about the background context of the letters, which will limit the book’s readership. •

Judith Brett is Professor of Politics at La Trobe University.

Nine-eleven-itis: crossing the borders of belonging 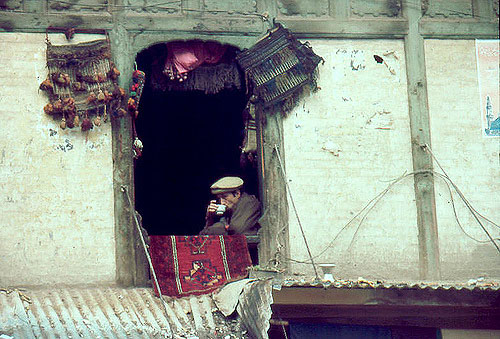