John Howard as opposition leader rather than as prime minister has something to say to a fractious opposition, argues Peter Brent 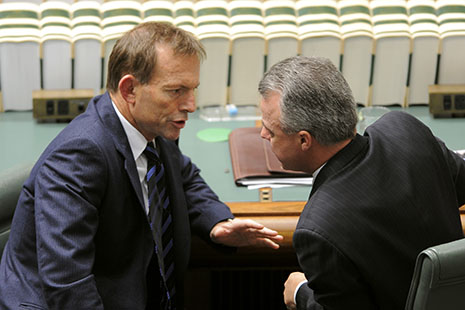 CONFUSING one’s own preferences with those of the electorate is an occupational hazard of political commentary. Advice to an opposition party about what it “must do” to regain power almost invariably coincides with the advice-giver’s personal policy preferences. The free market fancier will advocate taking tax and spending cuts and labour market flexibility to an election because this is what the electorate is crying out for; the environmentalist believes the voters want more whale sanctuaries.

It is not very different inside the parties themselves. Liberal MPs of a leftish persuasion reckon the party must move back to the centre to be competitive, while those on the right think John Howard had it just right: he did win four elections, after all. All of this compounds the opposition leader’s many difficulties; and for the current Liberal leader, Malcolm Turnbull, there’s the added bonus of mischief-making by former treasurer Peter Costello.

Why is the Liberal party in such a muddle? In part this is just the lot of oppositions, but it doesn’t help when the leader has as little authority inside the party as is clearly the case today. After the leadership change last September the Australian’s Paul Kelly was correct when he told ABC1’s Insiders that “Turnbull needs to be rating better in the polls than Brendan Nelson in order to try and exercise his authority in the party and keep the party united.” If Turnbull had substantially improved on his predecessor’s numbers he would today have the authority to decide strategy and the troops would fall into line. But it wasn’t to be.

Both major parties have their strengths and weaknesses, but circumstances dictate which performance is on show. Only three years ago many believed federal Labor would not achieve electoral success until it had reformed, increased its membership numbers, stopped preselecting dud candidates and decided what it stood for. Labor did none of these things and got elected anyway. Now it’s the Coalition’s turn.

John Howard provides a useful template. As prime minister he showed that it is possible to be more conservative than the average voter and still get re-elected. But even if you don’t believe his longevity in office was largely due to the same factors that saw counterparts in Britain, Canada, New Zealand and most of our own states remain in power – a rocketing world economy, historically low interest rates and unemployment and soaring house prices – the challenge for today’s Liberals is to get elected from opposition, not from government. The Howard we need to look at is Howard the opposition leader – in both versions.

If Howard was ever a “conviction politician” in opposition, it was during the first incarnation from 1985 to 1989 when he stubbornly clung to views on matters such as Medicare (detested it), Asian immigration (to be cut) and government spending (to be slashed). That leadership was a failure. When he returned in 1995 he methodically repudiated each of the above and, apart from a vague change of emphasis in relation to “values” (mainly regarding Aboriginals, the arts and various “elites”), largely promised policy continuity, something the prime minister, Paul Keating, obviously found as infuriating as Howard himself would when facing Kevin Rudd eleven years later.

There is no magical middle “spot” a party must find to win office; there is instead a broad middle ground an opposition must inhabit to be competitive when a government is vulnerable. This ground shifts to accommodate the incumbent – very galling to freshly defeated former governments – but it is large enough to include a variety of views on many issues.

So an opposition needs to occupy the acceptable middle ground while differentiating itself. But there are some places it cannot go, and today industrial relations is one of them. Like mandatory detention was for Labor, this is an explosive issue precisely because it represents something embedded in the “old Australia.” A regulated labour market is as quintessentially Australian as keeping out the non-European hordes, and no opposition can hope to win on such emotional turf, even if armed with the most rational of arguments.

Costello urges his party to remain pure on IR, but he must know better. As a veteran of the 1993 GST debacle who afterwards showed no compunction distancing himself from the policy, he would be aware that going to the next election with a promise of re-deregulation would be electoral suicide. Yet he persists in encouraging elements of his party along that line, presumably because it hurts Turnbull.

There is another factor at play. Some Liberal players inside and outside parliament are determined to ensure Howard gets well-treated in the history books. Tony Abbott and the Sydney Institute’s Gerard Henderson are examples of both categories. This may be a worthy endeavour, but it is a fine line to walk because every emboldening of the Howard rump in caucus works against the party’s electoral chances.

As Gough Whitlam observed, “certainly the impotent are pure.” Keepers of the Howard flame should take heed: trying to replicate the Howard government years is folly for the Liberals. •

Peter Brent, a researcher at the Australian National University, is editor of Mumble and a member of the Democratic Audit of Australia