A hulking ruin stands in judgement over a country adrift 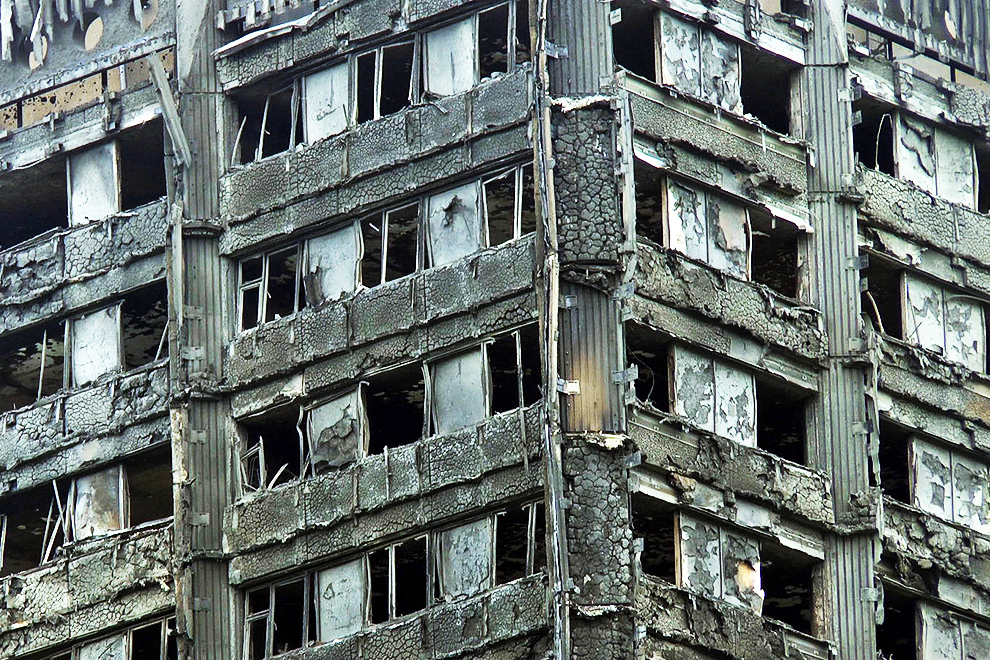 A charred housing block in the north Kensington area of west London stands as a grotesque symbol of human tragedy and public shame. Just past midnight on 14 June, a blaze sparked in a kitchen on the fourth floor of Grenfell Tower swept upwards with alarming speed and ferocity. Residents above, many of them quite recent immigrants from the Arab world and Africa, were trapped in their flats, or tried to descend by the building’s single stairwell. Helpless panic gave way to agonising slow death by smoke inhalation or burning. By Sunday evening, the number confirmed as dead or missing was approaching sixty. Only painstaking forensic work of the kind required after 9/11 will identify the exact toll.

An emergency begun in a cascade of flames, which dozens of firefighters worked relentlessly but vainly for four hours to contain, ended in a blackened shell. This sarcophagus, which people in the district will be living with for months, is now a container not only of numberless remains but also of all the prodigious dread, emotional and political, aroused by the inferno.

This monument is also shaping the disaster’s aftermath in ways still evolving. After such an event, raw grief and rage, fear and disbelief were always going to be abundant, mingling with more respectable and easily packaged reactions. Everything is inflected, too, by nearby Notting Hill and south Kensington’s conspicuous affluence, a proximity that magnifies the city’s social intimacy and its divisions alike.

How the fire started is not yet clear. But as to its catastrophic spread, the early details have the unmistakable stench of a major scandal, political and commercial, in the making. The exteriors of the twenty-four-storey building, which was built in 1974, had been given a refit in 2015–16, on which £8.6 million (A$14.4 million) was spent. But who benefited?

A tendering process operated by the Kensington and Chelsea Tenant Management Organisation, which runs the building on behalf of its owner, the Royal Borough of Kensington and Chelsea, resulted in a contractor and then a sprawl of subcontractors handling different parts of the work. One attached a type of cladding, with a plastic (rather than mineral) core, ruled dangerous or banned in the United States and Germany on grounds of its flammability, and implicated in Melbourne’s Lacrosse Building fire in 2014. No water sprinklers were installed, despite a 2013 coroners’ report saying that the 75 per cent of Britain’s 4000 tower blocks lacking sprinklers should have them retrofitted. Cost-cutting appeared a factor in both decisions.

When the makeover did get under way, it seemed uncoordinated and slapdash to worried residents. In one of many communications, the Grenfell Action Group issued this prescient warning in November 2016: “Unfortunately, [we] have reached the conclusion that only an incident that results in serious loss of life of residents will allow the external scrutiny to occur that will shine a light on the practices that characterise the malign governance of this non-functioning organisation.”

The chain of responsibility is stretching backwards: from the contractors, management and Conservative-run council to the record of the Conservative government over fire-safety measures. Gavin Barwell, housing minister in 2016–17 – newly appointed chief of staff to prime minister Theresa May after losing his seat in the general election, an episode in the political merry-go-round that might otherwise have been overlooked – reportedly took no action over sprinklers when given the opportunity. In 2014, his predecessor Brandon Lewis had declined to make them compulsory, saying, “It is the responsibility of the fire industry to market sprinkler systems effectively.”

More tales of negligence are relayed daily, bit by bit composing an indictment with many ingredients: policy dysfunction, technical incompetence, pinched investment, inadequate regulation. And criminal responsibility? The formality of an investigation was opened on Thursday. The police initially said that there was “nothing to suggest the fire was started deliberately,” but under questioning stressed that their inquiries would be “wide-ranging” and look at all aspects, including the tower’s refurbishment.

All this churns the emotions of people closely affected. A huge voluntary effort is supplying their immediate needs, but many still do not know the fate of their family members, friends, colleagues and neighbours. Insecurity, loss of all possessions, and a lack of information cloud their future. Answers, accountability and access to loved ones are their righteous claims.

Most authorities have been found in some way deficient, the elected ones more so (London’s mayor Sadiq Khan partially excepted). The Metropolitan Police and esteemed London Fire Brigade deliver regular updates on casualties and the missing. Council leaders are notably absent from the scene, though they have secured emergency hotel accommodation for the most needy and promised to rehouse all affected. Central government, aside from the announcement of a public inquiry and a preliminary aid package of £5 million (A$8.3 million), has shown little urgency, less coherence and, in the eyes of a wounded local populace, zero empathy. If the disaster itself reflects a broken social contract in a core area of public responsibility, its febrile aftermath exposes – or confirms – a deep want of trust between citizens and their leaders.

“Not good enough” was May’s verdict on her own government’s performance. The words came on Saturday, soon after she met a band of Grenfell residents, her failure to do so over the previous three days having provoked savage criticism. But it was Queen Elizabeth who articulated the sense of a vacuum of moral leadership, thus in effect filling it. Referring to “a succession of terrible tragedies” – the fire having followed three terrorist attacks – she said that “it is difficult to escape a very sombre national mood… Put to the test, the United Kingdom has been resolute in the face of adversity. United in our sadness, we are equally determined, without fear or favour, to support all those rebuilding lives so horribly affected by injury and loss.”

Decoded, this is less likely to mean “buck up, Theresa” than “game’s up.” Either way, the head of state’s expression of concern about her realm is indeed a quietly thunderous message to the governing class to, well, shape up. In constitutional terms, it also neatly reverses Tony Blair’s crown-saving act following Princess Diana’s death in 1997, by putting the monarch’s own authority at the service of a drifting executive.

But who is there to grasp the sceptre, and can that even be done? Ghoulish symptoms are coalescing in these worst of times in the country’s recent history: Brexit’s unknowns, post-election deadlock, directionless governance, those terror incidents, and multiple economic and social pressures. Against this broader context, Grenfell’s disaster reeks of systemic failures that demand a comprehensive strategic response. If only Britain were remotely capable of such a thing.

Can any consolation, even encouragement, be found in Britain’s modern history? This tragedy, after all, also belongs to a melancholy sequence of major disasters that together cost hundreds of lives. But the ensuing inquiries and reports, where safety and other recommendations have made their way into reality, may have guarded many more.

The lowest point was the 1980s and 90s, coincident with the previous long period of Conservative rule. The events included fires in a soccer stadium and on the London underground, an oil platform explosion, a stadium crush, a passenger ferry sinking and a leisure boat accident. Different in type and location they may have been, but “Hillsborough,” “Piper Alpha,” “the Marchioness,” “the King’s Cross fire” and the rest also came to be attributed not just to contingent failings but to institutional flaws in Britain’s public life: underinvestment, poor regulation, managerial indifference, silo effects, and official neglect or corruption.

That nothing equivalent hit people in their homes seems fortuitous, especially given the houses-in-the-sky boom of the statist-welfarist 1960s and 70s, which transformed urban landscapes. A turning point in attitudes was the gas explosion at the Ronan Point tower block in east London in 1968, only two months after it opened, which led to its partial collapse and caused four deaths. Grenfell’s construction six years later, however, shows that planners still saw new high-rise building as a ready answer to urban Britain’s changing housing needs. Indeed, many designers and surveyors of those decades would defend the era’s safety standards even as they acknowledge other flaws.

Margaret Thatcher launched the next housing revolution in the marketising 1980s by giving tenants the “right to buy” their rented property. Alongside squeezed local budgets and changing priorities in urban planning, that meant depletion or decay for much of the public sector’s stock, redeemed in part by the semi-dissident ecology of regional housing associations and philanthropic trusts.

But the Conservative era of 1979–97 was indelibly marked by that chain of tragedies, with the name of the ferry that went down off Zeebrugge in 1987 (the Herald of Free Enterprise) supplying a potent signifier. The switch to New Labour began a decade of modernising public works, which coincided with the onset of digitalisation. Under Tony Blair, the word “disaster” acquired association more with the waste of vast sums on abortive IT projects, on the extravagant nullity of the Millennium Dome, and later on the Iraq war. The skyscrapers transforming London’s vistas were now increasingly financial rather than residential.

Labour also supported local councils in upgrading their housing stock, in many cases refitting to take account of improvements in materials, design, technology and security features. When an ominous fire at Lakanal House in Camberwell, south London took six lives in 2009, the site was greatly improved. But the fallout of the financial crisis in 2007–09 cramped resources and strategic thinking, especially as far as housing is concerned.

There is no doubt that a reset is overdue. “Fires have a way of making the inexcusable unignorable,” says the architecture critic Rowan Moore, author of a brilliant new book about London, Slow Burn City: London in the Twenty-First Century, citing the city’s great fire of 1666 and Chicago’s in 1871. He concludes a fine philippic with a prediction that invokes Ronan Point: “The greater and more lethal monstrosity of Grenfell Tower will change the British attitude to housing forever.”

Greg Bankoff and colleagues expand the historical point in Flammable Cities: Urban Conflagration and the Making of the Modern World. If fire is at times “a catalyst for the introduction of stricter building regulations, social reform, and more effective governance,” as Dirk Schubert writes there on Hamburg’s 1842 blaze, London might now and again become a laboratory for more egalitarian progress.

North Kensington’s skeletal tomb – as if no one had ever lived inside – stands in judgement. It vindicates past warnings and present emotions, and the hunger for justice they now inspire. The hulking ruin itself may become the guarantee that a purgative light will continue to shine on the tragedy, or the atrocity, that happened here. •