Do bureaucratic shake-ups have the benefits prime ministers are hoping for? 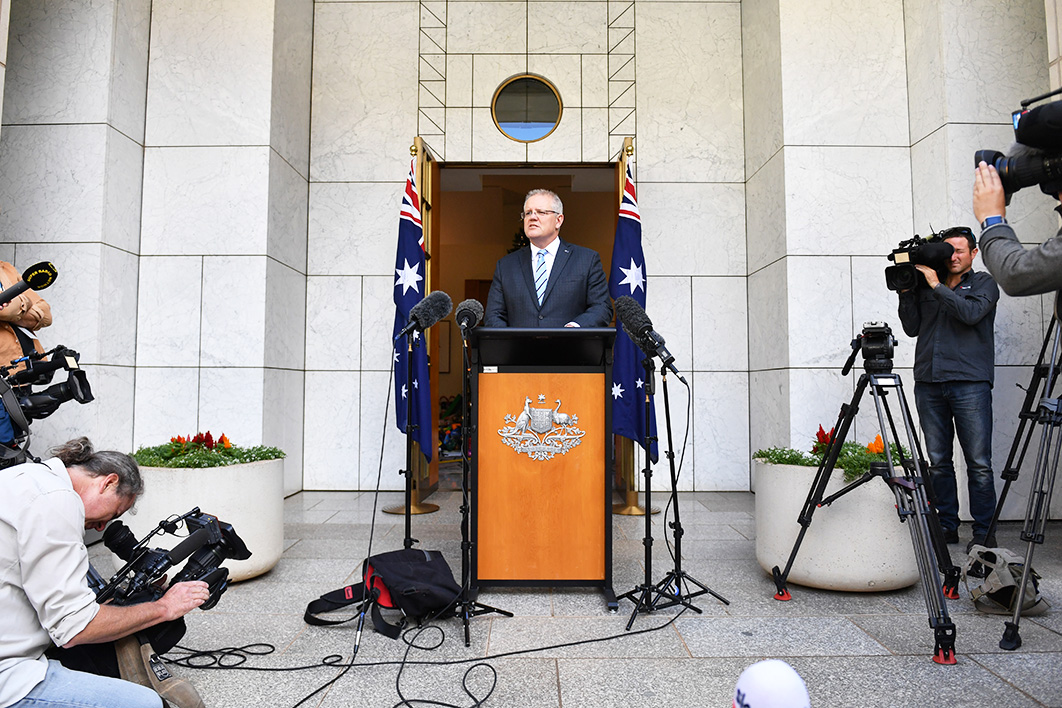 Prime minister Scott Morrison’s major restructure of the federal bureaucracy, announced on the last parliamentary sitting day of the year, came as a surprise not just to pundits but also to the bureaucracy itself. According to the Australian, agency heads — five of whom will be shown the door — were totally blindsided.

But the announcement shouldn’t have come as too much of a surprise. The bureaucratic shake-up is slowly but surely becoming a set piece for a newly elected leader, part of the ritual of assuming power. True, Morrison’s side has occupied the government benches for five years now, and the prime minister himself has been in the chair over a year, but recall that most Coalition MPs were resigned to defeat up until, well, just about election night this year. It has taken time for the government to adjust to the startling fact of its continuing existence and start asserting some control over the agenda.

And that’s what the almost-traditional public sector purge and restructure is all about — control. John Howard set the standard in 1996 with his infamous “night of the long knives.” Even before being sworn in, he announced the sacking of six departmental secretaries — from Immigration, Transport, Foreign Affairs, Health, Environment, and Employment, Education and Training. Before the election he had promised “no slash and burn… no punishment of people on the basis of ideology,” but evidently mere proximity to Labor over the previous thirteen years gave him enough to work with. The bitter relationship between the government and the top layer of the public service would linger, with one dumped secretary, Defence’s Paul Barratt, taking the government to court over his dismissal.

Howard’s break with convention was stark. For his idol, Robert Menzies, questioning the professionalism or loyalty of the civil service was strictly the preserve of conspiracists and radicals — not a matter for serious statesmen. Though he had promised to roll back many of Labor’s postwar regulations, Menzies sacked no senior civil servants on taking office in 1949. Even “Nugget” Coombs, one of the architects of Labor’s Keynesian economic strategy, was summoned post-election and told not to worry about his job; he would go on to serve nearly twenty years as head of the Commonwealth and Reserve Banks under the Coalition. Indeed, as Norman Abjorensen reminded us just before Morrison’s purge, Menzies kept on a phalanx of senior Labor-appointed mandarins, and he would come to trust in them sometimes more than in his own cabinet.

Menzies’s relationship with the bureaucracy typified the “career service” model of the bureaucracy: it would be independent, professional and impartial. We saw some cracks in that facade under his successors — John Gorton replacing the long-serving head of the prime minister’s department, John Bunting, with Treasury’s Lenox Hewitt, to murmurs of disgruntlement in the top echelons of the public service, and his successor William McMahon reversing the decision — but for the most part this was the nature of the relationship in the postwar era.

That began to change in a serious way under Gough Whitlam. The Labor leader viewed the bureaucracy, which had not worked for a non-Coalition government in nearly a quarter of a century, as a potential handbrake on many of his ambitious reforms. In his 1973 Garran Oration, he shared his concerns that permanent heads in the Commonwealth Public Service seemed at times to dominate the policy process. In contravention of the Westminster system, he believed, ministers lacked control over policy. And so he announced a strategy to put the public service in its place: he would diversify his sources of advice, bringing in new commissions and inquiries, consultative committees and ministerial staffers to weaken the bureaucracy’s monopoly over policy advice.

Whitlam also made some controversial appointments, including John Menadue, Jim Spigelman and Peter Wilenski — Labor sympathisers or, in Menadue’s case, a former Labor candidate. But there it more or less ended. Like Morrison, Whitlam sought to amalgamate departments, but he conspicuously avoided a purge of department heads. He kept John Bunting as head of his own department, Keith Waller at Foreign Affairs, Frederick Wheeler at Treasury and Clarrie Harders at the Attorney-General’s — old-guard mandarins all, each of them a knight, and some of them destined to became thorns in the government’s side.

Like Whitlam, Labor’s Bob Hawke retained most serving senior bureaucrats, including the controversial John Stone at Treasury. Political scientist Patrick Weller has largely debunked the claim that Labor entered office with a “hit list” of department heads too close to the previous regime. Hawke made one secretary a judge and posted another overseas: not exactly a purge. For the most part, secretaries had their chance to develop a working relationship with their new ministers. But there were exceptions: the head of Immigration was disposed of under mysterious circumstances, while the buying out of Defence head Alan Woods with a chairmanship was clumsily done.

More significantly, Hawke loosened the job security of top mandarins. First, in 1984, “permanent heads” were replaced with “department secretaries,” an ominous shift in nomenclature. Three years later, Hawke abolished the Public Service Board, which had played an important role in the appointment of top public servants. Later, under Hawke’s successor Paul Keating, department secretaries’ tenure was radically altered, making it far easier for governments to get rid of secretaries they found undesirable. Frank and fearless was out of fashion; “responsiveness” was ascendant.

Howard’s 1996 purge, then, wasn’t a bolt from the blue. The federal government had been slowly sliding from a Whitehall-style professional civil service towards an American-style partisan bureaucracy for some time. But it was a shock. Here was an incoming prime minister clearing the bureaucratic decks. Not just a diplomatic posting here and a cosy board job there; wholesale sackings were now in the governmental repertoire.

While Kevin Rudd and Julia Gillard avoided a blood-letting, Tony Abbott sacked four department heads on arrival, including Treasury head Martin Parkinson; and Malcolm Turnbull replaced three departments heads, who ostensibly resigned after he took over the prime ministership, and brought Parkinson back as head of his own department. Now, after recovering from the shock of still being in office, Morrison has ousted five secretaries — just a few months after jettisoning the same Martin Parkinson and replacing him with his party-aligned chief of staff, Phil Gaetjens.

The Coalition has taken the public service so far down the politicised route since 2014 that Labor looked to be sharpening their own long knives ahead of the 2019 election: Gaetjens and Home Affairs head Mike Pezzullo looked like they might be first up against the wall under a Shorten government. It never happened, of course — but a change in leader can now be as dire as a change in government for secretaries sweating over their tenure. The need for new leaders to differentiate themselves, to create new cut-through, new ideas and more responsiveness, is just as great.

Here’s the question, though: does it actually work? Do purges and departmental reorganisations really help prime ministers get a grip on things?

Looking at Howard’s tenure, we might be tempted to conclude yes, it does: those years went on for so long they are routinely referred to as an “era.” But it took time for Howard to become the dominant figure we remember him as. His first term, immediately following his night of the long knives, was distinctly shaky — scandals, broken promises, unpopular policies, flagging public support. Months out from the 1998 election, his net approval rating was in the negative 30s and polls put the Coalition’s primary vote at 34 per cent.

Howard barely made it to his second term, losing the popular vote that October. If there was a political dividend to the 1996 purge, it did not seem to matter two-and-a-half years after the fact. The Australian’s Paul Kelly concludes that the “unjustified” sackings, which “injected bad blood into relations between the new government and the public service,” were one of Howard’s key missteps in his first term.

So it went for Tony Abbott, who seemed to gain little in the way of control from his own purge. Rather, it helped to isolate him and cut him off from critical advice. Martin Parkinson himself reported that public servants were more reluctant to serve the government with gusto after the sackings, because doing so could make one a target for the next government. (Parkinson had worked on climate policy for Rudd and Gillard.) The public service was even less keen to tell the government which of its policies came with fairly serious risks. And, of course, Abbott didn’t make it to his first election as prime minister.

Similarly, amalgamations may seem to grant enhanced control over the machinery of government, but history records that, if anything, they have the inverse effect. This was the recent experience in Victoria, for example. In 2013 Dennis Napthine’s Coalition government brought planning and transport together; in 2015, his Labor successor, Daniel Andrews, added a series of other economic portfolios to create the unwieldy Department of Economic Development, Jobs, Transport and Resources. If anything, amalgamations made it harder, not easier, to control the public service and ensure it was working on the government’s priorities. Over the past two years the government has opted to break that mega-department back up into pieces, the lesson apparently learned.

In the process, however, much was lost. Great chunks of time and money went into relocating, renaming and reorganising the new departments. Morale took a beating too, with the future of this unit or that team unclear each time. Units and authorities were split up or abolished, fragmenting or even losing expertise, documentation and institutional memory. Ask a department to turn over records from their previous incarnation and they will tell you they don’t know where they are, how the filing system worked or who they could possibly ask about it. As Laura Tingle pointed out in her Quarterly Essay, Political Amnesia, endless turnover — of senior bureaucrats and in departmental structures — shatters the capacity of the public service to remember, and thus to learn.

Morrison’s shake-up, then, is a potentially fraught move. History doesn’t suggest it will deliver much in the way of enhanced responsiveness from the public service. Indeed, in some cases these shake-ups appear to have made the life of a prime minister harder. Controlling the bureaucracy can be more difficult, controlling the agenda harder, policymaking riskier. Perhaps governments rather than the bureaucracy are where tighter control is needed, for it takes discipline to put suspicions aside and work with an institution that until yesterday served your bitter enemies.

John Howard had many vices, but one thing he excelled at was learning from his mistakes. Scott Morrison, in so many ways a reincarnation of Howard, doesn’t seem as sensitive to mistakes of the past. •