Looking forward to constitutional reform by looking back at Uluru 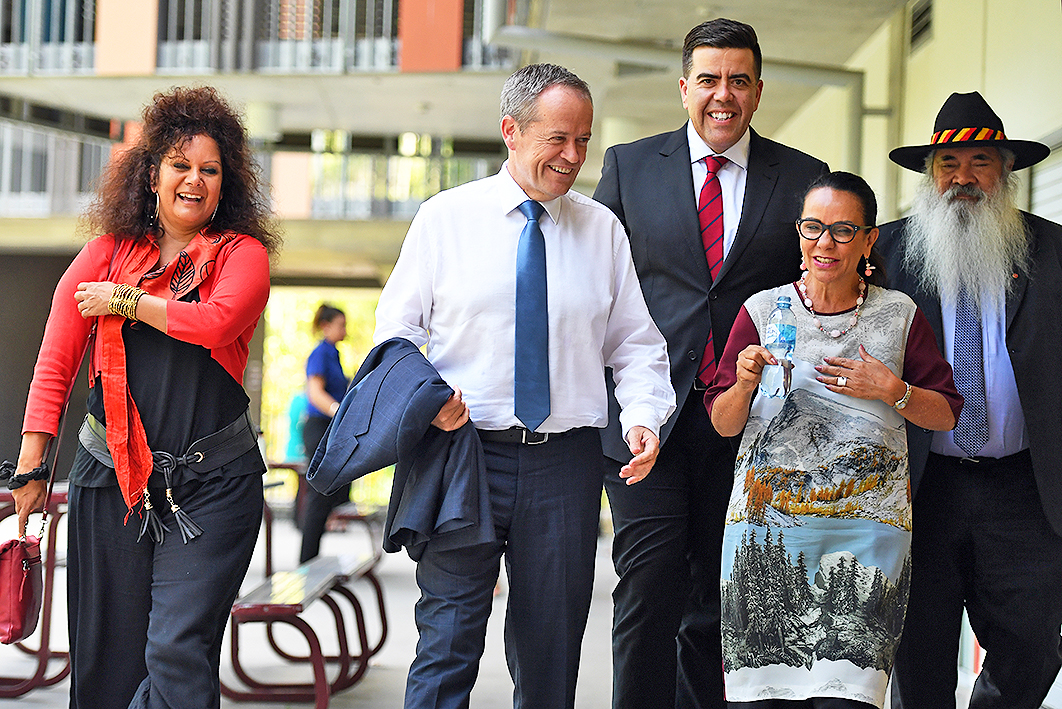 Australians are likely to vote within the next three years on whether Aboriginal and Torres Strait Islander peoples should have a First Nations Voice to Parliament, as proposed in the Uluru Statement from the Heart. Supported by his party’s Aboriginal MPs, Patrick Dodson, Linda Burney and Malarndirri McCarthy, opposition leader Bill Shorten has signalled very clearly that this is Labor’s priority for constitutional reform. Indeed, just last week he confirmed that it would be pursued before a plebiscite on whether Australia should become a republic.

But the best way of bringing about that reform is still being debated.

Unfortunately the parliamentary committee that spent much of last year considering the options didn’t advance the debate greatly when it reported in November. Like others before it, the committee made the mistake of treating the Uluru Statement’s elegantly simple proposal as somehow underdeveloped. Yet the regional dialogues and the Uluru convention, which preceded the statement, had demonstrated a sophisticated understanding of the nature of constitutions and constitutional amendment, the political realities of referendums, and how best to design the Voice.

The parliamentary committee did provide some important clarity, however. It confirmed that the Voice is the only widely supported — and therefore viable — constitutional reform option. It also noted the lack of support for the idea that the Voice was a “third chamber of parliament,” which should have put to rest last year’s verballing of the concept by Barnaby Joyce, Malcolm Turnbull and Scott Morrison.

But the committee equivocated about how to make the Voice happen. Indeed, it was silent on whether parliament should legislate for the Voice or seek to have it constitutionally enshrined. Given that the latter option was endorsed by almost all of the submissions made to the committee, this failure of nerve is disappointing.

Constitutional change was perhaps the most fundamental dimension of the Uluru Statement’s call for a Voice. Only by enshrining the Voice can Australia respect the remarkable consensus of Aboriginal and Torres Strait Islander peoples expressed at Uluru. Only through the process of a referendum will the Voice achieve the popular legitimacy and authority necessary for its ultimate success as a political institution.

The committee’s failure to recommend a constitutional amendment at least partly reflects its view that a referendum is unlikely to succeed without a fully detailed plan for the Voice and without the support of the major parties. Both of these reservations misunderstand the nature of constitutional reform.

Since the committee reported, leading constitutional experts have challenged the idea that bipartisanship is necessary for a successful referendum. Trust in politicians and loyalty to major parties, especially at the federal level, is in serious decline. As the marriage equality campaign showed, civil society and state governments can lead successful law reform campaigns even when federal parliament can’t agree. Importantly, too, the Voice proposal draws its authority not from federal parliament but from the deliberative process from which it emerged.

The idea that the Voice must be fully designed before a vote also fundamentally misunderstands what constitutional reform is designed to do. A constitution is not just another piece of legislation; it shapes a society by establishing the institutions of state, placing obligations on them and limiting their power in ways that reflect the fundamental social values of the community. As the distinguished Israeli Supreme Court jurist and academic Aharon Barak has explained, this makes a constitutional text quite different from an ordinary statute: it is expressed at a high level of abstraction and often in open-ended terms.

In this light, the option rejected by the committee — an immediate referendum to enshrine the Voice, drawing on the authority of the Uluru Statement and the process that led up to it — emerges as the most compelling. A transparent and rigorous design process would follow this referendum.

This option was set out in detail in a submission to the committee by the three Indigenous leaders of the Referendum Council — Pat Anderson (co-chair), Megan Davis and Noel Pearson — and the technical legal advisers who attended each of the regional dialogues and the convention — Sean Brennan, Dylan Lino, Gemma McKinnon and myself. Unlike the authors of other submissions, our aim was not to offer our own opinions on the reform proposals and process; instead, we drew on the records of the regional dialogues, the documents endorsed by the Uluru convention and the full Uluru Statement. (The full statement is on pages 16–32 of the Referendum Council’s final report, which sits behind the single-page statement, as endorsed at the constitutional convention.) Drawing its authority directly from Uluru, the proposed process had four key dimensions.

1. THE ULURU STATEMENT PROVIDES AUTHORITY AND DETAIL FOR A REFERENDUM

The submission argued that the process leading up to the Uluru Statement provides sufficient authority for a referendum on constitutional reform to create a First Nations Voice. The dialogues, convention and statement provide not just authority to act but also a clear approach to framing the amendment.

Drawing on these sources, the submission proposed the following wording for the amendment:

(1) There shall be a First Nations Voice.

(2) The First Nations Voice shall present its views to Parliament and the Executive on matters relating to Aboriginal and Torres Strait Islander peoples.

(3) The Parliament shall, subject to this Constitution, have power to make laws with respect to the composition, functions, powers and procedures of the First Nations Voice.

This provision sets out the primary function of the Voice using language from the Uluru Statement. Consistent with the understanding drawn from the dialogues, it leaves the Voice’s composition, functions, powers and procedures to the normal legislative process. This will ensure, as participants in the dialogues understood, that the Voice evolves over time to become as effective a vehicle as possible for Aboriginal and Torres Strait Islander peoples to speak to parliament and for other functions that might be determined to be appropriate.

2. THE DETAILED DESIGN SHOULD BE DONE AFTER A REFERENDUM

The plan for the Voice to be designed after the referendum reflects what constitutional scholar Rosalind Dixon refers to as “constitutional deferral.” According to this established practice, the broad parameters of the reform will be set out in constitutional text, and the detail provided through statutory enactment. A ready example is the High Court, which was created in the Constitution but designed in detail through legislation two years later.

We have seen something similar in the negotiations over a treaty (or treaties) by the Andrews government in Victoria. While the parties are yet to settle on the precise form that it (or they) will take, all parties — government and Aboriginal — have committed to the broad goal and the statutory enshrinement of a detailed process for negotiating its detail.

It’s important to stress that the constitutional referendum pertains only to the constitutional words (such as those in proposed section 129) and not to the detailed design of the Voice. The public debate in the lead-up to a referendum should focus on what is being constitutionally entrenched: the broad parameters of the body and the empowering of parliament to determine its composition, functions, powers and procedures. The people of Australia are not being asked to vote for a particular design of the Voice — Model A, say. They are being asked to vote on an enabling provision that will allow parliament to select a model, whether it’s Model A, B or C, in the future.

Indeed, it would be misleading to ask Australians to vote Yes for a particular model when that model might not be enacted by parliament for any number of reasons — and even if it is enacted, it might be amended or entirely repealed and replaced. The regional dialogues understood that only the existence, core nature and primary function of the Voice should be constitutionally enshrined, and that it must, in practice, be capable of evolving. If a particular model is presented for constitutional reform, politicians may feel reluctant to amend that model, backed as it is by a national public vote.

3. A TRANSPARENT, INDIGENOUS-LED VOICE DESIGN PROCESS SHOULD BE ESTABLISHED

Having said that, the submission was aware of the public’s need for more information about what they are being asked to vote for. Rather than designing first, the submission proposed that parliament would endorse a bill spelling out the process by which the Voice would be developed and release it to the public alongside the referendum question. This should provide sufficient certainty and confidence ahead of a referendum to First Nations, parliament, the government, the states and the Australian people.

The submission sets out the process through which the bill would be developed. Getting this process right will prove just as important for the legitimacy of the Voice as the form the Voice ultimately takes. The process cannot be rushed or imposed on Aboriginal and Torres Strait Islander peoples. Above all, it must be underpinned by respect for their right of self-determination.

The United Nations Declaration on the Rights of Indigenous Peoples recognises that this right is engaged at moments when new political institutions are being created. It stresses the need to make sure that their design reflects the collective will of the peoples concerned. To respect this right, the First Nations Voice must be designed by an Indigenous-led process that involves extensive participation and deliberation by representatives of First Nations from around the country. It must go beyond consultation and move into genuine participation and deliberation.

This would be similar to the process that produced the Uluru Statement and the demand for a First Nations Voice — “the most proportionately significant consultation process that has ever been undertaken with First Peoples,” according to the Referendum Council. Drawing on that model would also provide a level of certainty to those who have witnessed the success of the Uluru process.

The submission also recognised that non-Indigenous Australians should have input into the process because its creation will change the governing arrangements of Australia as a whole. Revealing how this process would work would provide a platform for a public education campaign before the referendum.

4. DESIGN MUST BE CONSISTENT WITH ULURU’S DESIGN PRINCIPLES

As well as setting out the process, the submission suggested that the draft bill should include a set of design principles distilled from the regional dialogues and the Uluru convention. Including these principles would provide further transparency to the referendum campaign, while not pre-designing the Voice.

Under the design principles, the Voice must:

Australia stands at the precipice of historical constitutional reform. Important progress towards that goal was achieved in 2018, particularly with the Labor Party’s firm commitment to act and, to some extent, through the work of the parliamentary committee.

But the path ahead remains cluttered with misunderstandings about the nature of constitutional reform, outdated beliefs about how that might best be achieved, and a failure to understand the sophistication of the authority that was provided at Uluru. The proposed plan provides a path through those obstacles drawing on the success of the process that got us to this point. •

Gabrielle Appleby is a Professor at the Law Faculty at UNSW Sydney. She worked pro bono as a technical adviser at the Regional Dialogues and First Nations National Constitutional Convention at Uluru throughout 2016–17.