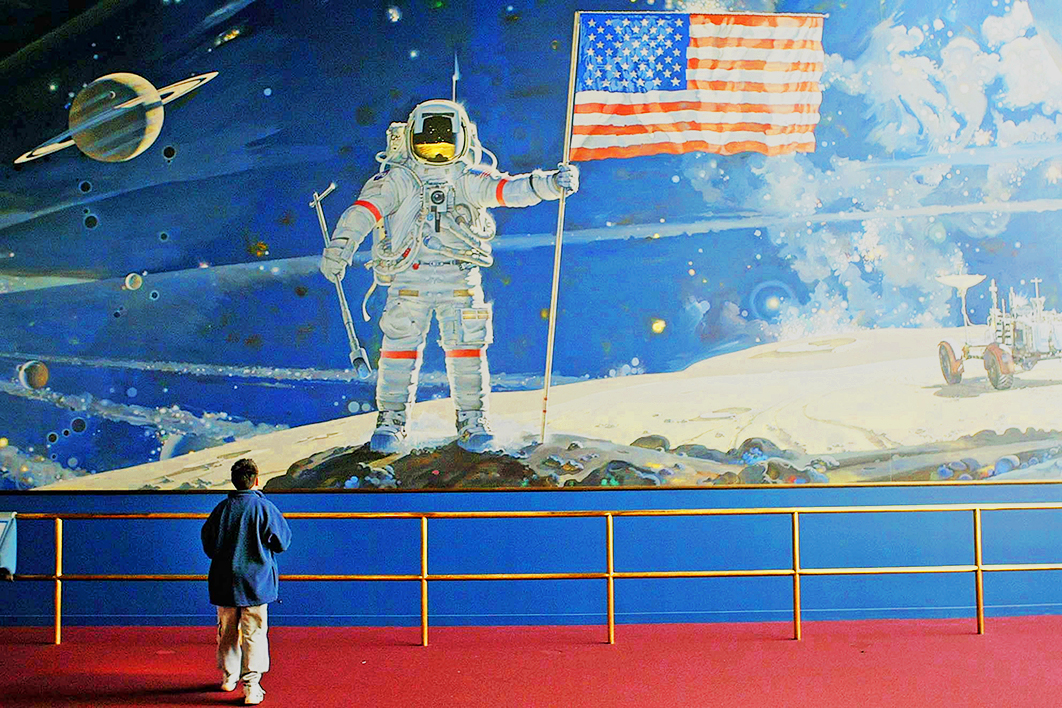 The Decadent Society: How We Became the Victims of Our Own Success
By Ross Douthat | Simon and Schuster | $22.99 | 272 pages

Ross Douthat has been thinking a lot about space.

The New York Times columnist, an idiosyncratic conservative with a strong theological bent, opens his new book about American decline with his head in the stars, reminiscing about the moon landing in 1969: “The peak of human accomplishment and daring, the greatest single triumph of modern science and government and industry, the most extraordinary endeavour of the American age in modern history.”

He is rhapsodic. And nostalgic. As he shakes the stardust from his eyes, he sees himself stuck on a world that has grown both decadent and stale, like a pint of Ben & Jerry’s with a bad case of freezer burn.

This is the decadence that Douthat spends the next few hundred pages exploring. Its root cause, he says, is a decidedly imperial one. We — “the modern West” — have run out of new frontiers to explore and new lands to conquer here on Earth, and we have lost the will to explore the one frontier we have left, out there in the stars. As a result, we have entered a new age of stagnation and decline.

His argument self-consciously echoes historian Frederick Jackson Turner’s famous “frontier thesis,” first laid out in 1893. In a movement that defined the national character, Americans had spent more than a century settling the land from the Atlantic to the Pacific, and Turner was worried about what would come next. Without new frontiers, he feared, Americans would lose their self-sufficiency and innovative spirit, and instead turn inward and enter a long era of national decline.

Turner’s America was rescued from that fate when the United States overcame its anti-imperial roots and began gobbling up land overseas — places like Cuba, Puerto Rico and the Philippines. But after twenty years of twenty-first century wars, Douthat’s America has lost its appetite for overseas adventuring. So: to the stars.

It’s a flip solution, not worthy of Douthat’s more compelling analysis of the underlying problem. Call it decline, stagnation, gridlock — he calls it decadence — but whatever the label, American culture and politics have entered a disquieting phase that demands our attention. From shrivelling birthrates to partisan impasses to an entertainment culture dominated by sequels and remakes, society has slipped into an era of “drift and stagnation and uncertainty,” one Douthat is determined first to understand, and then to overcome.

Consider sterility. It’s a problem Douthat means quite literally. Many developed nations, he argues, are running low on a fundamental resource — babies. Below-replacement fertility rates have been a subject of much discussion in recent years, and here Douthat blends conservative concerns about expanded reproductive rights, delayed marriage and the sexual revolution with thought-provoking passages on loneliness and alienation.

He also points to another cost of low birthrates: society as a whole ages, becomes less nimble, more risk averse, less innovative. At a time when the three significant candidates left in the 2020 presidential race are all in their seventies, it’s hard to argue that America isn’t evolving into a gerontocracy.

Or take the idea of stagnation, which may not seem an obvious description of our time. Everywhere you look, there’s a new company, a new product, a new app, a new innovation. Some of these are con jobs like Theranos, the sham blood-testing company founded by Elizabeth Holmes; others are heavily capitalised pipedreams like WeWork, which collapsed under its own weight late last year but somehow continues to expand. It’s true that some technologies have been real innovations — and yet, Douthat argues, they have not been so much transformative as additive, changing our patterns but not propelling society forward. Our ancestors got the lightbulb and the automobile; we got a new version of the iPhone.

This point, though, begins to expose one of the major flaws in Douthat’s argument: perspective. American mythology has turned the invention of technologies like the lightbulb, the automobile and the telephone into legends about tinkering innovators whose effect on society was a lot like, well, flipping a switch: instant transformation from darkness to light.

But for all the grand pronunciations — “What hath God wrought?” Samuel Morse asked as he opened the first commercial telegraph line — those social and political transformations were a long time coming. Seen from the perspective of their own time, the lightbulb was an upgrade on gas lamps, the automobile on horse-drawn carriages and streetcars. They felt more like evolutions than revolutions.

Without the benefit of distance, Douthat can dismiss new technologies that are now so ubiquitous they seem mundane — the internet, email, the iPhone. But these innovations have transformed the ways humans communicate, learn and even think. It may feel like the online world is just Amazon shopping and subreddits and Fortnite, but in a generation’s time the radical transformation of an era — and what it hath wrought — will be far clearer.

Technology, however, is not where Douthat’s lack of hindsight matters most. His read on rising illiberalism, which he dismisses as both “phantom” and “play-acting,” seems intensely short-sighted.

Take, for instance, how he sees the white-power violence in Charlottesville, Virginia in 2017. Part of a reorganised racist far right, a group of neo-Nazis, neo-Confederates and militia members marched on the small southern town over two days, ultimately killing one woman and injuring nearly twenty others. It was one of dozens of such gatherings that have taken place since Trump’s election, though the one that left the deepest scar on the national psyche.

Douthat dismisses this as “Weimar play-acting,” noting that the leaders at Charlottesville quickly lost their following and an attempted anniversary rally scared up only a handful of diehards.

Somehow he misses the fact that a robust, transnational white-power movement is making inroads in politics across his “modern West”: in Britain, Germany, Hungary, Canada, France, Italy and beyond. And deadly white-power terrorism has increased since 2017, with mass shootings at synagogues in the United States, a mosque in New Zealand, a hookah bar in Germany.

The broader trend towards illiberalism is nascent, not non-existent. Douthat acknowledges that this might be the case — illiberal democracy “could develop into a serious ideological challenge to the West” — but he dismisses it as a phantom all the same, opting for his thesis of decadent stagnation over global instability.

Same goes for Donald Trump. “Where is Trump’s abnormality, his incipient authoritarianism, most manifest?” Douthat asks. “Where else but his Twitter feed.” Setting aside that tweets are official presidential statements, that is simply untrue: take, for example, the travel ban, the efforts to strip naturalised citizens of their citizenship, the use of detention camps on the border, the family separations. Trump’s authoritarianism has been hemmed in but not thwarted. And no tweet has had the damaging consequences, both immediate and long-term, of denaturalisation policies or concentration camps. These may feel like “play-acting” to Douthat, but for the subjects of these policies they are very real, and feel nothing like decadence.

Proto-authoritarianism is not full authoritarianism, but it is directional. Saying illiberalism has not prevailed is like declaring there’s no cake when someone has just made batter: it is true but conditional, and doesn’t acknowledge where in the process things might stand.

If the end point of the age of decadence is still unclear, its beginning is far more obvious. Though Douthat, a conservative traditionalist, is no fan of the upheaval of the 1960s and its effect on American culture, he sees it as the last truly dynamic era of American history, when society springboarded forward in another evolutionary leap. But soon after, it became clear that the centre could not hold, that all that revolutionary energy had depleted. Yes, change still happened, but to Douthat, these were just diminishing aftershocks of the cultural earthquake of the 1960s.

By the end of the 1970s, a decade defined by political corruption, a lost war, economic pain and — yes — narcissism, the stagnation and decline had become impossible to ignore. How impossible? The president himself gave a television address not about the country’s political crisis but its spiritual crisis.

In the speech, Jimmy Carter diagnosed the country with a crisis of confidence, one rooted in, of all things, consumerism. Ostensibly addressing the country’s energy crisis, Carter, a former Sunday school teacher, quickly pivoted to matters of the soul. “In a nation that was proud of hard work, strong families, close-knit communities, and our faith in God, too many of us now tend to worship self-indulgence and consumption,” he said. As a result, Americans found themselves adrift, empty and isolated.

Carter spooled out a long list of problems: lack of faith in institutions, gridlock in Congress, sharp polarisation and extreme politics. The nation, he said, had devolved into “paralysis and stagnation and drift.”

Oddly, Douthat ignores Carter’s speech, despite its many parallels with his own analysis. Which is too bad, because the differences between the two are enlightening. Carter called for limits, suggesting Americans start living within their means and stop gobbling up the resources of the world. Rather than cheerleading growth, he suggested restraint. The president was not looking towards the stars; his feet were firmly planted on the earth.

The Carter critique, with its suggestion that capitalism is not all it’s cracked up to be, highlights another missing perspective in Douthat’s work: any attempt to grapple with a major driver of the decadence he laments, capitalism. He recognises some serious economic problems, including growing inequality, a lack of investment and a capture economy that benefits the wealthy.

But not only does he fail to acknowledge the logics of capitalism at work in those developments, he also misses the way it influences his cultural arguments. The reliance on star authors over a robust midlist in publishing, the turn to movie franchises and remakes, the bland similarity of Top 40 songs — these are as much a function of market forces as they are some nebulous drought of creativity.

What is surprising about Douthat’s unwillingness to lean into — or even engage with — that critique is that there is a deep well of traditionalist critiques of the soul-dulling nature of capitalism and its capacity to weaken familial ties, religious devotion and cultural institutions. That the era of decadence emerged at the same time as the capitalist revival in the United States — the heady days of the 1980s — somehow escaped Douthat’s notice.

For all these flaws, The Decadent Society is a thought-provoking read. The ideas Douthat explores are worthwhile, and the pages are dotted with insights. It is, though, a book best read for the trees rather than the forest: individual passages trigger a flood of fascinating ideas and possibilities, but the sum comes up a little short of the various parts. Which makes sense: we simply don’t have enough distance from the last decade or so to see it as clearly as Douthat wants.

Perhaps that explains his love of the stars: he understands best things that can be seen at a distance. Our own time is too close for his far-sighted gaze. •

Will the High Court decide next week’s appeal on a broad legal issue or the case’s complex facts?

The case raises again the question: how does a criminal appeal judge’s role differ from that of a juror? Bidgee/Wikimedia 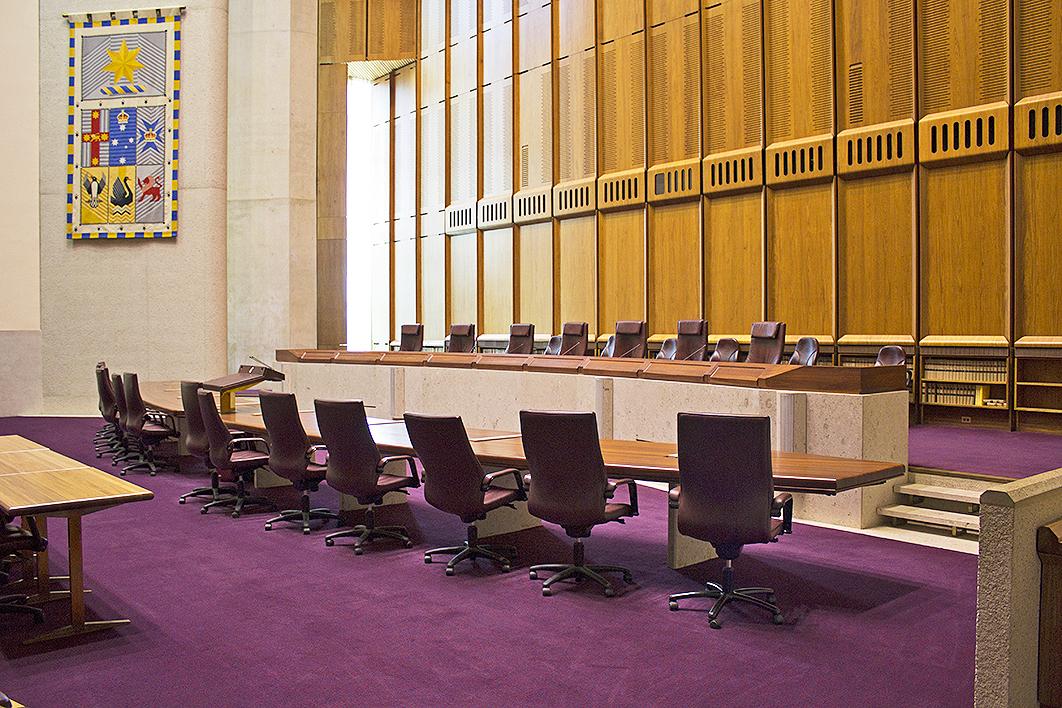 The case raises again the question: how does a criminal appeal judge’s role differ from that of a juror? Bidgee/Wikimedia