Despite the importance of relations with Indonesia, the government is not backing up its Asia-literacy rhetoric with funds, writes Edward Aspinall 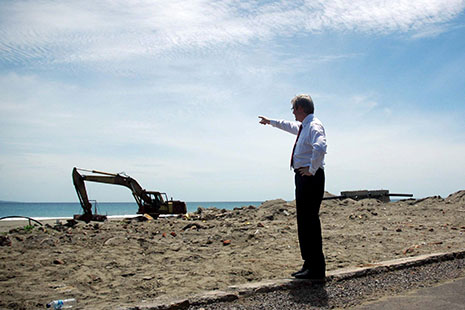 IN JANUARY 2005, I attached myself as a volunteer to a team of over twenty Australian surgeons, paramedics, nurses and healthcare managers who had flown to Banda Aceh after the tsunami surged across Aceh’s coastal zones, killing around 160,000 people. The Australian team had set up in one of Banda Aceh’s private hospitals, and there they performed many life-saving operations. They brought a planeload of sophisticated medical equipment and supplies with them, and dazzled the local Indonesian staff with their skills, techniques and treatments.

But – at least when I joined them – no member of the team was able to speak more than a few words of Indonesian. Doctors doing their rounds had great difficulty asking patients basic questions like “Where does it hurt?,” let alone explaining complicated medical procedures or the treatments patients would need to follow after being discharged. Many of the patients and their relatives were distressed that they couldn’t ask the doctors what was wrong with them or about their prospects of recovery.

With no other practical skills of my own to help survivors, it was a great relief to be able to use my knowledge of Indonesian language to work as an interpreter for the Australian team. In doing so, I joined several other Australians – mostly exchange students, NGO workers and the like – who helped out in this way because they happened to be in Indonesia at the time. It was a moving experience to help, in a very minor way, this team of Australian health professionals working in the aftermath of an enormous tragedy. Many of the survivors had horrific lower-body injuries, caused by pieces of tin or other objects in the swirling waters. The doctors performed what seemed to me to be miraculous surgery, patching over gaping wounds and pulling people back from the edge of death. They also treated their patients with warmth and humanity. The memory of the assistance they rendered, and of the gratitude of those they helped, remains vivid.

But the lack of Indonesian speakers on the team struck a jarring note. Certainly, I do not mean to criticise in any way the team members who went to Banda Aceh and performed such great service. I don’t know whether it had proven impossible to find Australian health professionals who spoke Indonesian fluently, or whether doing so had been forgotten in the rush to put the team together. But the absence of Indonesian speakers seemed a sad reflection of the state of relations between Indonesia and Australia: at a moment of such great need, when the Australian government and some of its people were making a generous and life-saving gesture, a basic and serious communication gap remained.

LAST NIGHT, Kevin Rudd launched a major conference on Australia–Indonesia relations in Sydney. No doubt the conference will conclude with many fine-sounding statements about how relations between our two countries have never been closer. Government spokespeople will make much of Australia’s commitment to forging greater understanding of Indonesia.

My experiences in Banda Aceh suggest that in some ways the relations between Australia and Indonesia are much narrower and more fragile than they are often portrayed. But things could get worse still, as one of the unacknowledged foundations of good Australia–Indonesia relations is in crisis. The study of Indonesian society and language has never reached critical mass in the Australian education system. It would be unusual to find an Indonesian speaker in any randomly selected group of twenty Australian professionals in any field. But at least the study opportunity has been available for many years to most Australian university students who want it. Now, Indonesian studies at Australian universities is feeling the impact of a decade-long decline in funding and activity. It is approaching a terminal phase. And not only is the Rudd government doing nothing to save it, some of its policies are actually worsening the situation.

Kevin Rudd has said that promoting “Asia literacy” is a key goal of his government. In a speech in Singapore last August he declared that he was “committed to making Australia the most Asia-literate country in the collective West.” His vision, he said, was “for the next generation of Australian businessmen and women, economists, accountants, lawyers, architects, artists, film-makers and performers to develop language skills which open their region to them.” There are few signs that he has acted to make this happen.

For decades, Australia has been a leading centre for research and teaching about Indonesia. Australian universities have produced a large group of graduates who are fluent in the Indonesian language and understand the culture, history and politics of the country. These people are now a crucial part of the connective tissue at the heart of the Australia–Indonesia relationship. They populate the government departments, businesses, NGOs and the aid organisations that work in or on Indonesia, and they teach Australian school children. European, Japanese and American policy-makers and government officials who visit Indonesia often express amazement at the number of knowledgeable Australians they meet.

This cohort of Indonesia-savvy Australians is an invaluable resource for our country. They are one factor that elevates Australia’s relationship with Indonesia above that which that country shares with other Western countries. Yet the framework that produced this layer of people is now under threat. University after university has either closed its Indonesian program or is considering doing so. Indonesian experts who were trained and recruited in the heady days of the late 1960s and 1970s are retiring and not being replaced.

In part, the decline of Indonesian studies is a result of funding pressures in a tertiary sector now driven almost entirely by market forces. Long ago, in the 1960s and 1970s, Indonesian studies attracted large enrolments, but it has not done so for decades. Instead, a spread of small programs provided Australia with a steady stream, rather than a flood, of Indonesia-literate graduates. Over the past decade or so, student numbers have dwindled, as students get turned off by the economic, political and security problems in Indonesia.

When added together, though, these many small programs still make Australia the world leader (outside Indonesia itself) in advanced training and research about Indonesia. No other country has the breadth of tertiary sector expertise on Indonesia, and it is this breadth that provides depth for both our knowledge of Indonesia and our varied relationships with it.

But small programs cannot survive when the logic of the market dictates all. Deans in financially pressed faculties have to make hard decisions to balance their budgets. Having to justify to their staff which programs to close, they understandably target the smallest ones first, which means Indonesian studies is often in the firing line. Australia’s foreign policy priorities count for little in such decisions.

In the absence of national planning, Indonesian studies dies the death of a thousand cuts. Here and there, high-flying academics are able to win big grants and carve out temporary Indonesian studies fiefdoms. Others shelter under the protection of unusually sympathetic deans or directors. But they do so with few guarantees of long-term survival, and without the institutional continuity and ballast that has made Australia the pre-eminent country for Indonesian studies.

In this context, it is significant that arguably the only Australian university where Indonesian studies has maintained a major presence and has not declined or experienced significant threat over the last ten years is the Australian National University. The unparalleled depth of Indonesia expertise here is made possible by special federal funding that subsidises the ANU’s Institute of Advanced Studies, one section of which focuses on Asia and the Pacific. Without similar federal priority on a broader level it is hard to imagine a long term future for Indonesian studies at most Australian universities.

In the early 1990s, the Keating government backed its rhetorical commitment to Asia literacy by funding NALSAS, the National Asian Languages and Studies in Australian Schools Strategy. The Rudd government promised to revive this program but has so far only initiated NALSSP, a pale and parsimoniously funded imitation. In the Keating years, the study of Indonesia, and Asia more broadly, experienced a renaissance in Australian universities. So far, despite all the rhetoric, there have been no signs of equivalent leadership from the new government.

More than just sitting on its hands, the Rudd government has actively harmed Indonesian studies in Australia by issuing over-cautious travel warnings to Australian citizens who plan to visit Indonesia. Wishing to cover itself against any risk of criticism for not warning of possible threats, and responding to popular fears aroused by the 2002 Bali bombings, the government has consistently exaggerated the threat of further terrorist attacks. No independent expert on Indonesian terrorism or security issues gives credence to the government’s evaluation of the risks, and the Australian warnings have consistently been more alarmist than those of other countries.

The travel warnings have done great damage to Indonesian studies in Australia: parents forbid their children from studying Indonesian, schools cancel study tours and close language programs, universities ban or restrict their students and staff from visiting the country. The travel warnings mean that, despite all the feel-good talk about better relations and Asia literacy, a culture of fearfulness and risk aversion permeates all facets of the Australia’s relationship with Indonesia, from the top down.

As the Australia–Indonesia bilateral relations conference begins, I can’t help remembering my experiences in Banda Aceh, and Kevin Rudd’s aim of fostering Australian professionals – including health professionals, one would hope – who speak Asian languages. This week’s conference is a fitting time for the government to put flesh on the bones of its rhetorical commitment to Asia literacy. It is also an opportunity to move away from the obsession with terrorism and security that dominated the Howard government’s attitude to Indonesia. Revising the travel warnings would be a start. Putting real resources behind teaching and research about Asia in Australian schools and universities would be even more significant. •

Edward Aspinall researches Indonesian politics at the Australian National University and is the coordinating editor of Inside Indonesia magazine.