Malcolm Roberts versus a century and a half of science

Diary of a Climate Scientist | If the new One Nation senator wants empirical evidence, he can take his pick from 150 years of research, says Sarah Perkins-Kirkpatrick 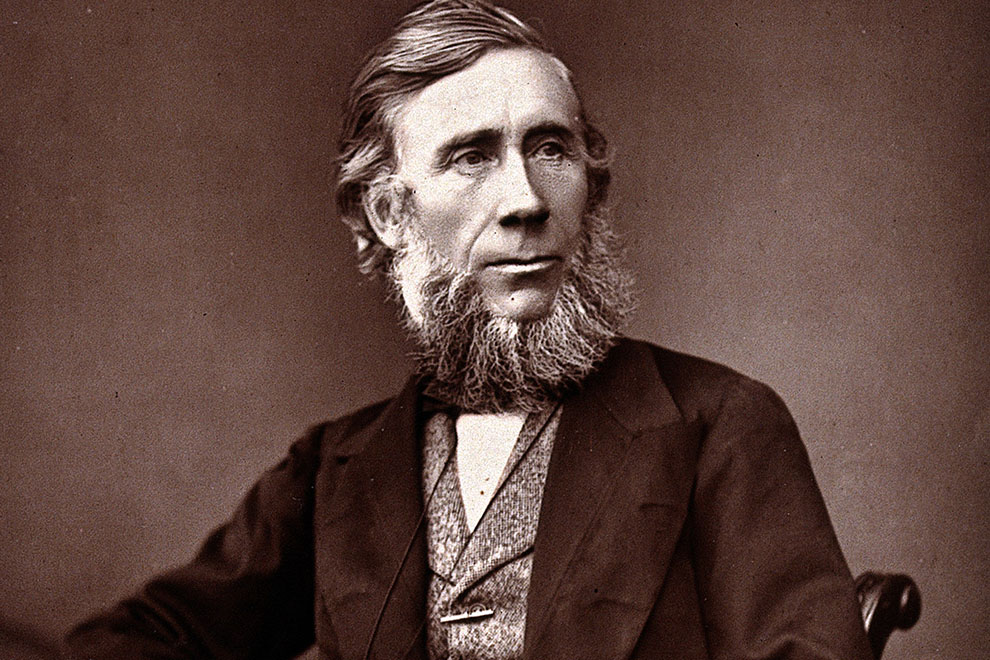 The dust of the most recent Australian election has finally settled, and thanks to the double dissolution there are many new faces in the Senate. Among them, despite receiving only seventy-seven first-preference votes, is Malcolm Roberts, who holds the second One Nation seat for Queensland.

Roberts, a former coalminer and industry consultant, has quickly become Australia’s best-known, most outspoken and, if I may say, most absurd climate sceptic. Anyone who has seen Roberts during his recent TV appearances, especially on ABC TV’s Q&A, will be familiar with his belief that there is “not one piece of empirical evidence” that climate change is caused by humans.

I wonder, does Roberts know what empirical means? Synonyms of empirical include “observed” and “experimental” – both of which are used extensively in climate science – but here, for the sake of brevity, I’ll stick to observed climate evidence.

At the frontline of climate observation is a national and international network of point-based weather observation stations. In Australia, some of these date back as far as the 1860s, with many more set up in 1910. (The United States and Europe have longer-established stations, and a network of British station provides observations from as far back as 1659.) Since 1979, gridded temperature readings, meticulously assembled from the highest-quality stations, have been supplemented by satellite observations. The story all these readings tell is the same: global temperature is well and truly on the rise.

Other observed indicators of current and past climate have also become available. Ice cores, for example, can tell us what the climate was like tens of thousands, even hundreds of thousands, of years ago. As new ice accumulates, air bubbles are trapped, and with them the greenhouse gas concentrations at that time, inclusive of carbon dioxide. Since carbon dioxide traps heat in the lower ten to twelve kilometres of the atmosphere, it is a good indicator of past temperature. These ice cores indicate that global temperature is not only higher, but also increasing at a rate faster than any seen during the last 800,000 years (though likely longer).

We also have extensive glacier records, sea-ice observations, sea-level altimeters, and ocean observations. All of these empirical observations are clearly consistent with a warming climate. Glaciers are steadily retreating or disappearing altogether, the Arctic sea-ice level was at its lowest on record last winter, sea levels elsewhere are rising at increasingly faster rates, and the global ocean is steadily warming.

If all this isn’t empirical evidence of a warming climate, then nothing is.

Malcolm Roberts also thinks that scientists have it the wrong way round: that rising temperatures cause carbon dioxide to increase, rather than vice versa. He might need to have a look at the work of nineteenth-century scientists John Tyndall and Svante Arrhenius, who (respectively) demonstrated how greenhouse gases work, and revealed the specific heat-trapping properties of carbon dioxide.

Tyndall’s and Arrhenius’s lab experiments demonstrated that under specific, very cold conditions – conditions that occur ten to twelve kilometres from the Earth’s surface – carbon dioxide absorbs and re-emits particular bands of long-wave radiation that amplify heat trapped in the atmosphere. Their work was undertaken well before anthropogenic climate change was even a “thing,” though Arrhenius did hypothesise that burning fossil fuels could increase global temperatures. In other words, the science of climate change is underpinned by physical, law-abiding, lab-based science.

Another chestnut Roberts relies on is the view that “there has been no global warming for about twenty years.” Well, fourteen of the fifteen hottest years on record have occurred since 2000, each of the past three decades has been hotter than the previous one, and 2016 is forecast to be the hottest year globally, surpassing both 2014 and 2015. Meanwhile, all other indicators of anthropogenic climate change discussed above have continued to get stronger over this period. There is variability in the climate system, of course, and so even with an underlying warming signal, non-record-breaking years are still likely. Manystudies have shown that the lack of a clear trend in global temperature between 1998 and 2014 was due to this sort of variability. Roberts would be wise to realise that this misconception has been debunked many times.

During Q&A, Roberts also said that the 1940s were warmer than now. It’s here that it is clearest how little time and energy Roberts has invested in his research. The 1940s comparison goes back to an old argument over which was the hottest year – in the United States. About a decade ago, there were, ahem, heated discussions as to whether 2006 (and prior to this, 1998) was hotter than 1934 (yes, Roberts even got the decade wrong). In fact, 1934 ranks as the fifth hottest year for the US, behind 2015, 2012, 2006, and 1998. It is important to remember that regional climates change at different rates to the global average, thanks to the mix of influences they experience.

Now comes my favourite – the argument that nature alone determines the level of carbon dioxide in the atmosphere. If, by nature, Roberts means the oceans and the biosphere acting as carbon sinks, then I guess there is some distant truth in the statement, for nature does indeed remove this gas from the air. But all sinks have their limit, and as the oceans continue to warm, their ability to suck up atmospheric carbon diminishes. We are also clearing forests at alarming rates, and re-releasing the carbon they have sequestered for hundreds, if not thousands, of years. On top of this, we’re knowingly burning ancient carbon sinks in the form of fossil fuels – something that nature did not intend.

Not to be outdone by his milder fellow-travellers, Roberts also accuses NASA, the United Nations, the CSIRO and the Bureau of Meteorology of being corrupt participants in a global scam. Honestly, I don’t even know where to start with this one. Roberts believes that NASA put men on the moon yet can’t maintain an accurate global temperature dataset. He thinks that all climate scientists are in on the scam, though I can’t imagine why, particularly when we have to deal with foolish and reckless sceptics like Roberts himself.

In a recent interview, esteemed climate communicator John Cook stated that it is unlikely the plethora of actual evidence will ever change Roberts’s view. But it is disturbing that the fallacies our new senator perpetuates may sway some people. We can only hope that their research into anthropogenic climate change is conducted more comprehensively than Roberts’s. •

The war on sprawl

Ever since William Thackeray satirised the London suburb of Clapham in 1855, critics and supporters of the suburbs have been battling it out, writes Graeme Davison

Antidote to sprawl? Sydney’s Cumberland County Planning Scheme sought to replace and extend old suburbs without the drawbacks of unregulated growth. Detail from “You... and the County Plan” poster, 1945 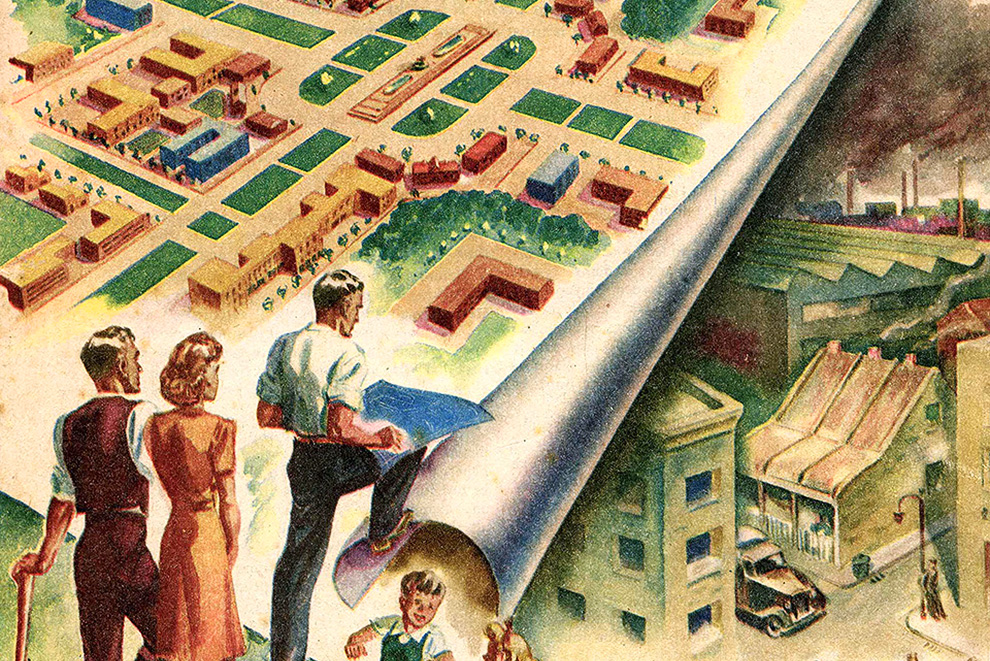 Antidote to sprawl? Sydney’s Cumberland County Planning Scheme sought to replace and extend old suburbs without the drawbacks of unregulated growth. Detail from “You... and the County Plan” poster, 1945