Bad luck has played a part, but that doesn’t explain why the PM has had such a bad year 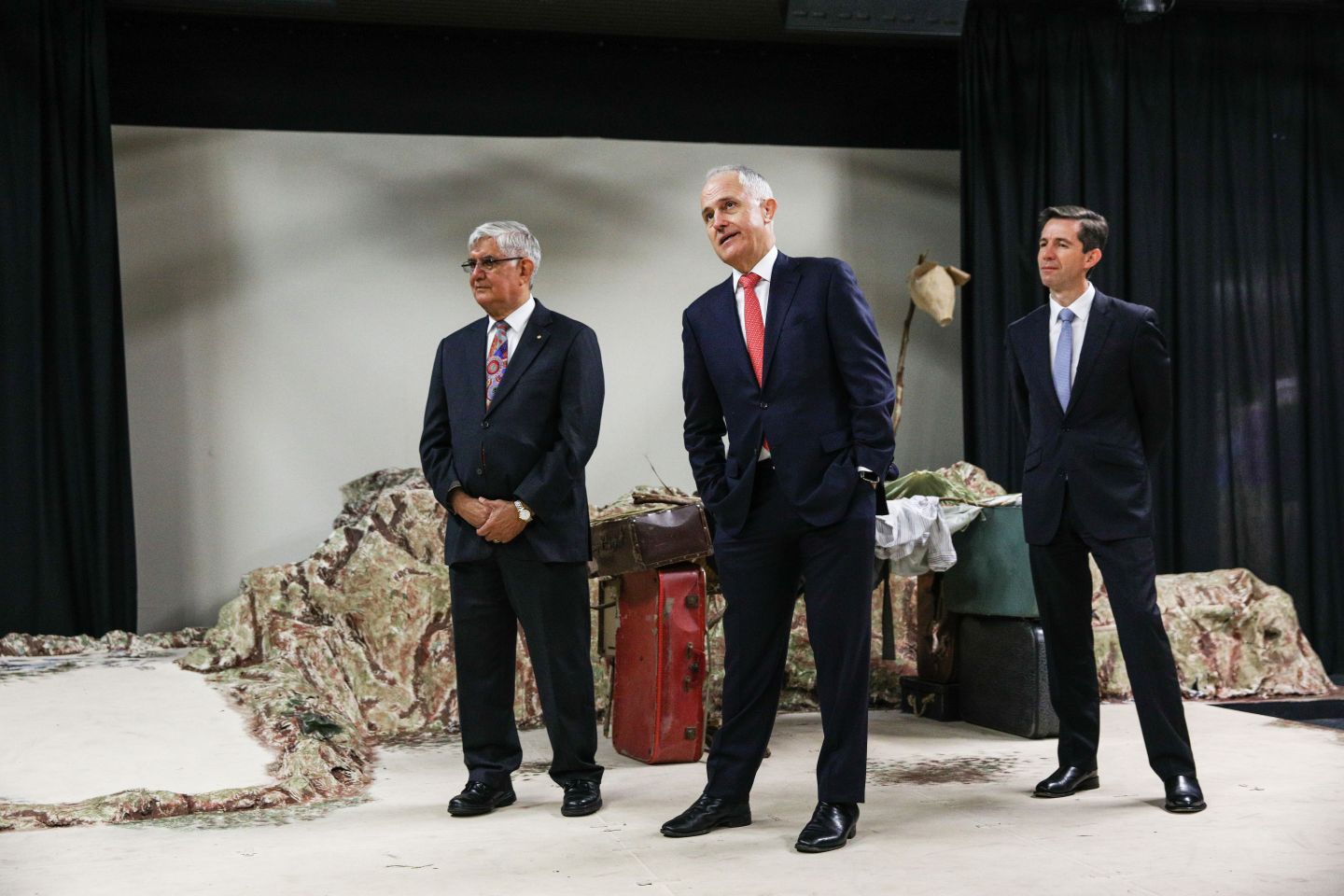 Given that Tony Abbott was scarcely a hard act to follow, Malcolm Turnbull should have enjoyed a protracted honeymoon in the top job. Of all Australia’s twenty-nine prime ministers, the stumbling, bumbling, inarticulate Abbott — long to be remembered for his “suppository” and shirtfront gaffes — is arguably the most inept of all, William McMahon notwithstanding.

Yet it was not to be, and the man who seemed to promise so much after finally achieving his long-cherished and doggedly pursued ambition has singularly failed to impress an increasingly sceptical electorate (or, for that matter, to win over equally sceptical sections of his own side of politics).

Not being Tony Abbott was simply not enough. Barring miracles, Malcolm Turnbull is likely to be remembered by history as just another middle-ranking leader, neither outstandingly good nor especially bad, and with little in the way of lasting achievements.

There were, however, glimmers of light in the immediate aftermath of toppling Abbott in September 2015. The most fervent welcome for the change came from the business community, which had floundered in uncertainty under the dismal pairing of Abbott and treasurer Joe Hockey — almost certainly the dullest and least competent duo to have held the two top jobs. The ambitious and quite unrealistic 2014 budget, which had no hope of passing the Senate, remains the epitaph for the Abbott–Hockey era.

A targeted Morgan Poll taken soon after the switch of leaders showed business owners, professionals and managers swinging decisively behind the new government — with the two-party-preferred Coalition vote recorded at 61.5 per cent (up 12.5 per cent from pre-Turnbull) and the Labor vote at 38.5 per cent. More importantly, confidence among this group of business owners, professionals and managers had increased to 118.6 points (up 5.2 from pre-Turnbull). The poll also showed real business confidence soaring from 102.6 in August to 119.3 in October.

In a portent of things to come, key members of the Abbott cheer squad, including the Murdoch press, found this result unpalatable and, according to the Morgan people, “selectively reported” a poll by the National Australia Bank that purported to show that business confidence actually fell after Malcolm Turnbull took over the leadership. In a stinging rebuke at the time, Pollster Gary Morgan wrote:

This is far from the truth and only serves to destabilise the new Turnbull leadership or cast doubt on the Coalition tax reform discussions. For years the business community has been calling for tax reform and a complete review (not piecemeal) of the Australian taxation system. It is unbelievable and inconceivable to think business has now lost confidence because Malcolm Turnbull and new treasurer Scott Morrison are reviewing tax and “everything including GST is on the table.”

Morgan added that while it was impossible to stop organisations conducting “questionable” polls, these were often “ill-conceived” or “completely self-serving or even mischievous.” It was the first indication that Abbott core supporters, for their own reasons, were not going to meekly fall in behind Turnbull.

But it was a brief period of sunshine, and Turnbull’s approval ratings — despite being consistently ahead of Bill Shorten as preferred prime minister — have been in decline ever since, tanking earlier this year at just 29 per cent (although still ahead of Abbott’s low point of 24 per cent in February 2015). Towards the end of this year, however, his own popularity, and support for the Coalition, has shown a slight resurgence, although almost thirty consecutive Newspolls have had the Coalition trailing.

How can we begin to explain Malcolm Turnbull’s apparent lack of traction? The successful journalist, high-flying lawyer and entrepreneurial banker whose rise to the top seemed irresistible — apart from a stutter when he lost the leadership to Abbott in 2009 — appears to have hit a wall.

For starters, he heads, however tentatively, a party that is increasingly fractious; diehard conservatives, such as Eric Abetz and Kevin Andrews, and of course Abbott, have never conceded his legitimacy as leader. To keep his job, he has had to appease key conservatives such as Peter Dutton, who remains his main rival.

As stolid and limited as Dutton is, his power in this government is enormous, ranging from his membership of key cabinet committees to his championing of the new super security portfolio. And it was Dutton who first suggested the expensive postal vote, against Turnbull’s wishes, on marriage equality. Each time Turnbull has conceded ground he has seemed weak — and certainly over the marriage issue, on which he had been counted as solidly progressive.

His flip-flop on the banking royal commission — after avidly resisting it with all the fervour of an industry lobbyist — has also significantly eroded his authority. Along with treasurer Scott Morrison, he appears to have misread (or chosen to ignore) mounting public anger towards the banks.

Then there is the egregious failure of the Liberal National Party to wrest power from Labor in Queensland, for which Turnbull is, somewhat inexplicably, being blamed. That result — contrary to the views of the NSW deputy premier, John Barilaro, a National, who launched a withering attack on Turnbull — has much more to do with Queensland politics and the local LNP’s ambivalence towards One Nation than anything that’s happened in Canberra.

But the behaviour of the LNP has created a wider problem for the Liberal Party as a whole, and also, by association, for Turnbull and his precarious hold on the leadership. Alone of the states, Queensland arranged an uneasy merger of the Liberal and National parties with the aim of maximising the conservative vote. A decade later, having delivered just one disastrous term of government, it is being called into question.

This is a problem for Malcolm Turnbull because the LNP’s difficulties are linked to the question of party identity, and especially how to deal with the challenge from the populist right as represented by One Nation. Do the Liberals take a stand against xenophobic, protectionist One Nation or seek to woo its supporters with populist/conservative policies and rhetoric? Will the Nationals cooperate if they opt for the first option?

The reason why the Nationals have not amalgamated with the Liberals elsewhere — and this goes back even further than the formation of the Liberal Party in 1944–45, when the Country Party refused an invitation to join in — is a fear that a merger would open up political space for a rump populist/rural party. And that, in a sense, is the role adopted by One Nation in Queensland, the most decentralised of states.

Turnbull is regarded by many on his side of politics as not being conservative enough to appeal to those tempted by One Nation’s blandishments — although future historians will be hard-pressed to identify any substantial progressive initiatives taken under his watch. An undoubted achievement, however, is the school funding reforms under Gonski 2.0 this year, moving to a comprehensive needs-based funding model.

Although it was supported strongly by Turnbull against Labor opposition, the real driver of the initiative, and the man who negotiated exhaustively with the Senate crossbench to ensure its passage, was education minister Simon Birmingham, one of the better performers on an otherwise lacklustre government frontbench.

Turnbull will no doubt seek credit for the marriage equality vote, but it will long be remembered how he capitulated to conservative forces in deciding on a potentially hurtful and divisive (not to mention expensive) postal vote rather than let parliament decide.

He still has promised tax cuts to offer the business community, but these might well come, if he can deliver, at a significant electoral cost once it becomes clear just how he will pay for them.

To some extent, he has largely escaped criticism for the NBN debacle, the effects of which are being felt across the nation in the rollout of a substandard broadband system. Yet, as the communications minister in the Abbott government, he was directly responsible for the changes made to the original Labor model, which included fibre to the premises. After having threatened in opposition to “demolish” the NBN, Turnbull as minister oversaw the so-called multi-technological mix, adopting a mixed copper–optical technology with fibre to the node, citing as justification cost saving and earlier completion.

The harder we look at this confusing picture, the less we see. Malcolm Turnbull: the man of undoubted talent who wanted so badly to be prime minister and promised so much, but was able to do so little with the prize when it finally dropped into his lap. While once appearing both authoritative and credible — a man of substance, vision and progressive sympathies — he has visibly diminished in office, pushed and pulled by powerful forces that he seems incapable of resisting. He has become a figurehead prime minister.

Looking set to lose the next election on current polling, it is likely he will fade quickly from the scene. He risks being remembered as yet another of those whom Donald Horne characterised more than half a century ago as the second-rate people who run the lucky country and sometimes share its luck. ●