The militarisation of Australia’s history has begun to reflect back on the present and change our political practice, argues Henry Reynolds 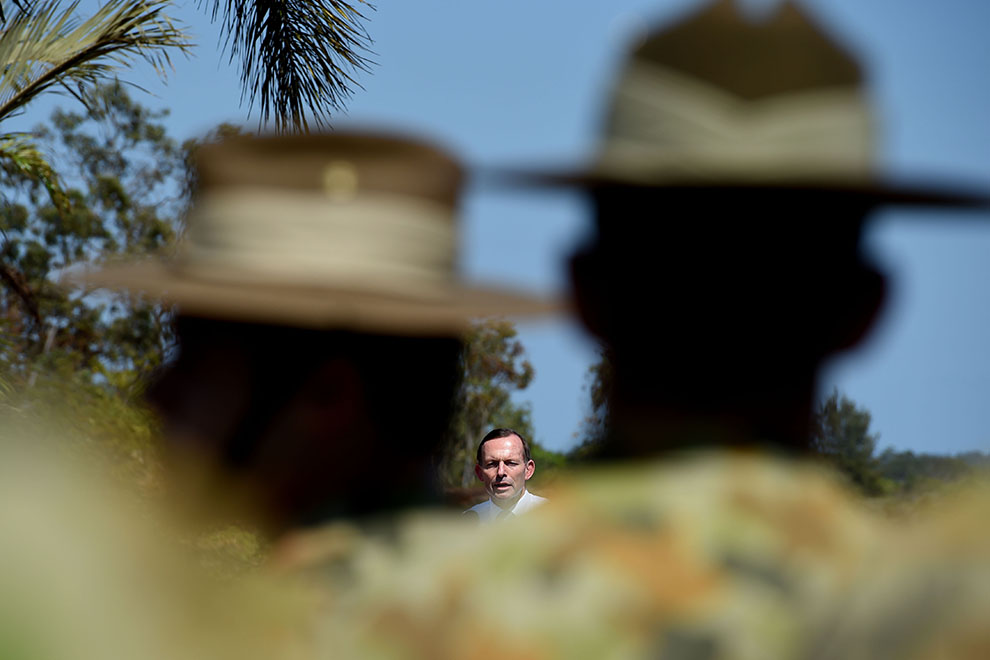 Australia is obsessed with war. For a generation, federal governments have funded an intense program highlighting the importance of our military history. It has reached into every part of the country. Books, films and research projects have been subsidised. Old monuments have been refurbished, new ones created. Trees have been replanted in ageing avenues of honour; new days of remembrance have been added to the already crowded calendar of commemoration. National leaders attend the funeral ceremonies of the fallen servicemen with a regularity that was never expected of them in the past. Recently the prime minister, the minister for defence and the leader of the opposition were absent from parliament to be at the private funeral of a soldier who died in what was officially described as a “non-combat” incident in Afghanistan.

The inevitable consequence of such an enduring, handsomely funded campaign to celebrate Australia’s war history is that all other aspects of our past are overshadowed and thereby diminished. This may not have been the intention of the promoters of historiographical militarisation. But a manifest distortion of the nation’s history has been the result. It may not be apparent, or even matter, to young people, but many older Australians find it a deeply disturbing development. The generation of historians who pioneered the teaching of national history in the middle years of the twentieth century paid little attention to military history, even though most of them had fought in the second world war. Their focus was on political and social developments within the nation, not on military adventures overseas. If anything, their own war experiences had given them a jaundiced view of military life.

Perhaps the most concerning feature of the spreading militarisation is the deliberate targeting of children. Schools across the nation are bombarded with free, professionally developed curriculum material including films, books, CDs and posters. Subsidies are provided for trips to the Australian War Memorial in Canberra. Essay competitions award winners with fully funded tours of European and Middle Eastern battlefields. There seems to be no reticence among the promoters of war as the defining national experience. They openly canvass the importance of reaching out to children from the earliest years of primary school and seem never to consider that their crusade is closer to propaganda than to pedagogy. And the sanctimony that pervades all treatment of the “fallen” stands in the way of healthy scepticism or dissident interpretations.

The desire to remember the war dead and respect their sacrifice is seemingly free from any consideration of the politics of any given conflict. But in the ubiquitous material provided to schools there are more portentous messages. In order to lend greater meaning to the loss of life in the Great War children are assured that the diggers died so that Australians would be free. Or more commonly that the nation was born, or was made, on the shores of Gallipoli. The implications fly off in all directions: nations are made in war not in peace, on battlefields not in parliaments; soldiers not statesmen are the nation’s founders; men of blood are more worthy of note than negotiators and conciliators; the bayonet is mightier than the pen; a few fatal days on the shore of the Ottoman Empire outweighed the decades of civil and political pioneering by hundreds of colonial Australians. That these ideas are so widely accepted illustrates their persuasive power. They are dangerous and they produce a distinctive Australian twist to the current widespread disillusionment with parliamentary democracy. The prestige of the warrior rises as that of the legislator falls.

Armies are not democratic institutions. Their characteristic forms, incorporating hierarchy, authority and obedience, tilt them more towards authoritarianism than towards democracy. Officers are appointed not elected. Comforting stories about the reluctance of diggers to salute them scarcely alters the institutional imperative for orders to be issued and for them to be obeyed without debate.

The militarisation of our history is having other consequences. It has begun to reflect back on the present and change our political practice. This has become apparent during the first year of the Abbott government, with Scott Morrison’s Operation Sovereign Borders the most obvious case study. In this quasi-military undertaking, surrounded with a cloak of secrecy and a calculated lack of accountability, the minister’s appearances, flanked by a senior military officer, deliberately smudge the distinction between civil and military authority.

But this is only the most egregious example. Prime minister Tony Abbott is constantly accompanied by senior military or Federal Police officers. Retired officers are appointed to carry out missions that would in the past have been assigned to diplomats or senior bureaucrats. Ministers clearly seek to draw on the prestige now accorded to the military, which shields them from the sort of scrutiny to which politicians are normally subjected. As an eminent citizen Peter Cosgrove was a popular choice for the role of governor-general, but the timing of the appointment was a further example of the growing intrusion of the military into political life. And when the military is drawn into everyday political life democracy is diminished.

The historical prestige now accorded the military influences national debate about war in general. It makes it easier for Australian governments to commit to conflict and harder for critics to engage in a serious national debate. The heroic image of the digger inhibits any assessment of the costs and benefits of war. To question the wisdom of engagement is seen to diminish the sacrifice and suffering of participants. Australians, it appears, want to remember war with the politics removed. This is true even in the current cavalcade of first world war remembrance. The commemoration of the Anzac landing lacks a searching assessment of the Allied powers’ territorial designs on the Ottoman Empire or the many dire consequences that followed and can still be felt. Australians seem to want to remember war without accepting moral responsibility for its ramified consequences.

The same can be said about more recent wars. It is instructive to consider the aftermath of the Iraq war. In the United States and Britain there has been an intense debate about what is now seen as a disastrous misadventure. Both George Bush and Tony Blair were subject to harsh criticism and impaired authority. No such opprobrium was visited on John Howard or his government; nor has there been any public accounting. When the last troops came home, prime minister Kevin Rudd declared there would be no inquiry into Australia’s involvement. His reason was pertinent: he did not think it appropriate while the returned soldiers were settling back into Australian life.

The lessons are clear at the moment of writing. Australian governments are able to go to war with an ease that is both dangerous and unusual in a democracy. We have inherited the British constitutional practice of devolving power over war, peace and treaty-making to the Crown with no provision for parliamentary veto or even input. The experience of involvement in Afghanistan and Iraq suggests that governments suffer no penalty from sending the troops overseas, regardless of the outcomes. Criticism of the war can be construed as cowardly attacks on the men and women in the front line. The prestige of the armed forces shields the politicians from legitimate scrutiny.

It is not surprising, then, that Tony Abbott sought to militarise the national response to the shooting down of the Malaysian airliner over Ukraine to the extent of proposing at one point to send 1000 troops into the middle of a civil war. And the same point can be made about the renewed involvement in the war in Iraq. The commitment was simply announced rather than debated. No other important decision of government would be made without proper assessment of objectives and costs. The Labor opposition has been complicit by failing to ask hard questions or refer back to our previous involvement and try to use that experience as guide and warning.

The government gives the impression that it has a hunger for war. This may seem a harsh judgement, but consider a statement made almost exactly a year ago by the newly installed defence minister, David Johnston, who told the Fairfax press that he wanted the military to be battle ready for future conflicts in the unstable Middle East and south Asia. “That’s the area where there’ll be instability and that’s the area that we might need to go back into at some point in the future.” He explained, in the words of the journalist who interviewed him, that after fourteen years of involvement in overseas conflicts the Australian Defence Force “had a strong fighting momentum that should not be lost.” Armies, the minister clearly believes, need wars. With the withdrawal from Afghanistan it was necessary “to maintain some interest for the troops.”

The threshold Australian governments need to cross in order to send forces overseas is perilously low. Because there has never been an assessment of why Australia has been so often involved in war, young people must get the impression that war is a natural and inescapable part of national life. It is what we do and we are good at it. We “punch above our weight.” War is treated as though it provides the venue and the occasion for Australian heroism and martial virtuosity. And while there is much talk of dying, or more commonly of sacrifice, there is little mention of killing and never any assessment of the carnage visited on distant countries in our name.

The phrase “lest we forget” is the most revered one in national discourse. But the current, enhanced awareness of past conflict may make it more rather than less likely that the same pattern will be repeated over and over again. •

Henry Reynolds is an Honorary Research Professor in the School of Humanities at the University of Tasmania.

Was the Gillard government more competent than its critics claimed? Frank Bongiorno reviews a new appraisal

Competence is the least of it: a supporter of Julia Gillard in front of Parliament House a few days before she was replaced by Kevin Rudd. Alex Ellinghausen/Fairfaxphotos 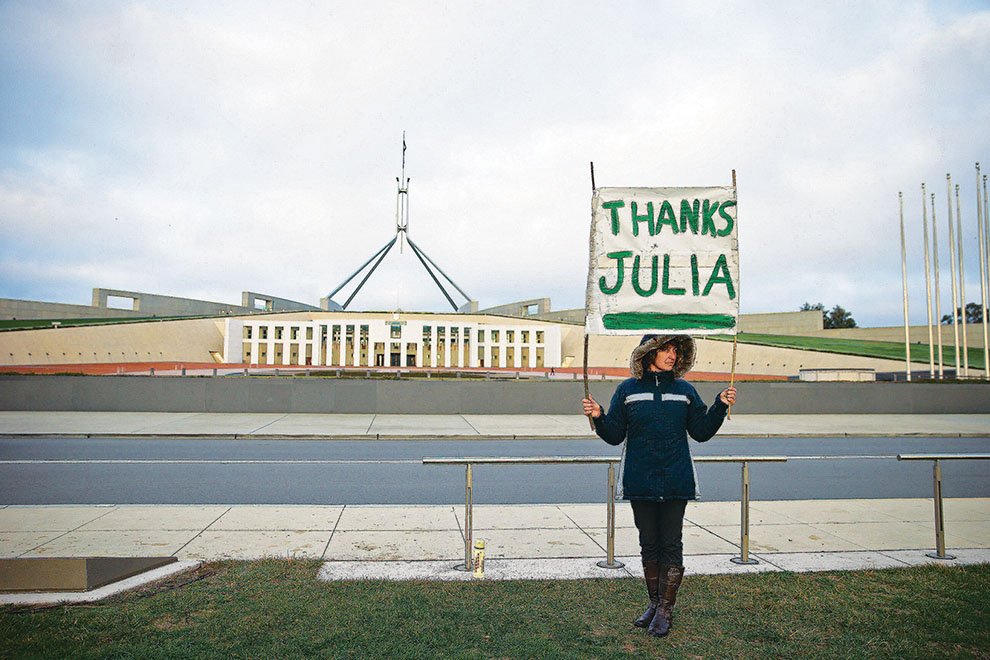 Competence is the least of it: a supporter of Julia Gillard in front of Parliament House a few days before she was replaced by Kevin Rudd. Alex Ellinghausen/Fairfaxphotos