A casual reference to the use of force underlines the flaws in Kevin Rudd’s thinking about Australia’s largest trading partner, writes Brian Toohey 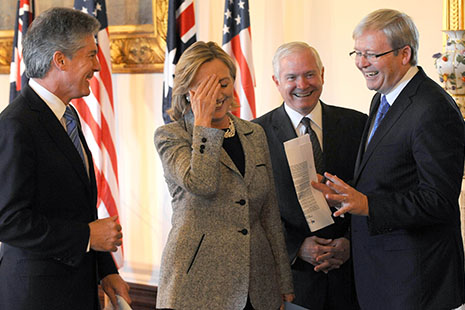 US secretary of state Hillary Clinton and US secretary of defense Robert Gates with their Australian counterparts, Kevin Rudd and Stephen Smith after the annual AUSMIN defence and security talks in Melbourne last month. AFP Photo/William West

IT IS FAR from comforting to know that Kevin Rudd described himself as a “brutal realist” towards China during a lunch with US secretary of state Hilary Clinton in March last year. Brutal? Yes. Realist? No. A realist wouldn’t glibly canvass going to war with China, as Rudd is shown to do in a US diplomatic cable released by WikiLeaks last Sunday. The cable quotes from notes taken by an American official at the seventy-five-minute lunch. The length of the lunch gave Rudd ample time to put a less one-dimensional view of the resort to force. But the extensive note gave no indication that he elaborated on the circumstances in which he saw the use of force as justified. In view of Rudd’s refusal to discuss the what was said at the lunch, this article is based on the note taker’s account that is set out in the cable.

Rudd’s apparent inability to come to grips with the complexity – let alone the horrific consequences – of an option he presents almost casually over lunch is reflected in his behaviour on other occasions. He clearly has a facility for learning a language like Mandarin, but is yet to demonstrate any appreciation of how a war with China could leave millions dead, wreck the world economy and offer no prospect of a military victory in any meaningful sense. A realist – in both the everyday sense of the word and its usage in international relations theory – would take account of these factors before readily embracing force as an option against a nuclear-armed state.

The State Department note said Clinton affirmed the US desire for a successful China, with a rising standard of living and democracy improving at a pace Chinese leaders could tolerate, and acknowledged “the impressive achievements in Chinese democracy at the village level.” According to the note, Clinton said the United States wanted China to take more responsibility in the global economic sphere, create more of a social safety net for its people, and construct a better regulatory framework for the goods it manufactures. She also noted the challenges posed by China’s economic rise, asking, “How do you deal toughly with your banker?”

The note said that Rudd, who was prime minister at the time, replied by describing himself “a brutal realist on China.” He supported a policy of integrating China into the international community – “all while also preparing to deploy force if everything goes wrong.” Rudd’s answer makes the use of force sound far easier than it would be – something Clinton appears to understand. The note doesn’t record her saying, for instance, “Ah! There’s the answer to how to deal toughly with a nuclear-armed country that funds your budget and current account deficits – go to war with it.”

Presumably, Rudd intended to elevate China’s status as potential threat, otherwise he would not have raised the option of resorting to force against a country that is Australia’s largest trading partner and America’s biggest financier. In any event, the US – far and away the most military powerful nation on earth – remains engaged in two wars, or three if the war on terrorism counts. It does not need gratuitous advice about the general value of military preparedness from Rudd or anyone else. On the contrary, it could benefit from hearing from a foreign leader who counsels restraint, rather than one who mentions going to war with China as if it were a routine option.

Rudd’s failure to outline the circumstances in which force should be used left him open to attack from the Coalition foreign affairs spokeswoman Julie Bishop after WikiLeaks released the note. “I find it troubling that Mr Rudd as prime minister advised the United States it should consider the use of force if other measures fail to counter China's growing influence,” Bishop said. “I don’t believe that that’s an appropriate piece of advice for Mr Rudd to give the United States and I call on Julia Gillard to detail whether this remains the view of the Labor government.”

The independent MP Andrew Wilkie, a former intelligence analyst with the Office of National Assessments, was also ctritical. “The prospect of using force against China, or supporting the US using force against China just because it might be sitting slightly outside the international community from time to time – I think that is just an inconceivable notion,” he saids. “I suspect there was some posturing on Kevin Rudd’s part at that time.”

But Rudd may not have merely been posturing. There are signs that he believes he has a special responsibility to warn the world about the alleged threat China poses in future decades. Never mind that no one knows what will happen to China in future. It might become a benign democracy; it may disintegrate economically and politically; it could remain a relatively stable authoritarian country whose commodity purchases underpin Australia’s economic strength. Or it might use force to try to dominate the world. But its present level of military spending, at about 1.4 per cent of GDP compared to almost 5 percent for the United States, suggests that the latter is not an immediate prospect.

NEVERTHELESS, Rudd claims to have a rare insight into what Chinese leaders will think and do in the decades after 2030. No one has the remotest clue. But the foreign minister’s imagined ability to see inside the minds of China’s leaders after 2030 now forms the basis of Australia’s defence policy. In 2008, Rudd gave a non-attributable briefing for senior News Ltd journalists in Sydney, during which he said in reference to the Chinese leadership, “I don’t trust the bastards.” In this context, he said Australia’s 2009 defence white paper would unveil a hugely expensive military build-up to counter the prospect of future Chinese aggression. When the white paper was released, it reflected Rudd’s views, though it also said that it did not see any serious conflict arising with China until after 2030. Even then, it gave no reason why this would occur, other than to rely on vague references to the “strategic risk” posed by China’s growing economic success.

Rudd has never explained why China would go to the immense difficulty of attacking Australia, when it would be much easier and cheaper to keep buying our commodities. He also ignores the way the combined power of India, Japan, South Korea, Vietnam, Indonesia, Singapore, Australia and the United States is likely to outweigh China’s for many decades.

When the white paper was being written, the CIA assessed Beijing’s military posture as a defensive response to the strong US military presence close to China’s borders. Australian intelligence agencies shared this view. So did two of Australia’s most eminent strategic thinkers, a former defence department head, Bill Pritchett, and a former head of the Office of National Assessments, Bob Furlonger, who jointly called for the white paper to be withdrawn.

In a conference paper delivered earlier this year, Mark Thomson, an analyst at the Australian Strategic Policy Institute, rejected the white paper’s claim that China could attack Australia during a war with the United States. “If the US is fighting a war with China, the last thing that the Chinese are going to do is waste resources and launch physical attacks on us 7000 km to their south,” he said. “To do so would be to abandon all of the limited advantages they have due to geography and expose themselves to all of the strengths of the US.” Thomson also disputed the white paper’s claim that bigger Australian forces would add weight to the US military position in the region: “We have as much chance of using armed force to shape the future of Asia as Belgium has of doing so in Europe.”

All the indications are that the US Central Intelligence Organization still assesses China as having no territorial ambitions beyond the claims it has made for decades in its immediate neighbourhood. During 2010, however, American opposition hardened to China’s more vocal assertion of its long standing claims to (mostly) uninhabited islands in the South China sea. The islands are variously contested by Taiwan, Vietnam, Thailand, the Philippines, Malaysia and others, as well as by China. Clinton and the US defense secretary Bob Gates reflected the tougher approach at the Australia–United States ministerial talks held in Melbourne in November. Julia Gillard readily fell into step with the US position. Rudd, in his new role of foreign minister, could even be excused for seeing himself as setting the pace.

Outside the talks, Rudd once again told journalists that China lacks transparency about its defence policy – a call that sits rather oddly with the Australian defence department’s reluctance to provide journalists with relatively mundane details about its own activities. Another analyst with the Australian Strategic Policy Institute, Andrew Davies, joined Thomson to argue in a recent paper that China is completely transparent about its core defence goal of achieving the capacity to deny its air and maritime approaches to potential adversaries. “It’s as fundamental to China’s self‑defence as it is to ours,” they said, “and it’s inconceivable that China would aspire to anything less”. However, they added, “After sixty years of ‘leading the free world,’ the US is unwilling to cede ground to China, even when that ground is on China’s doorstep.”

Following the joint ministerial talks, a former deputy head of the defence department, Hugh White, wrote in the Australian Financial Review that he wondered whether Gillard had really thought through her decision in Melbourne to join the United States in treating China as a strategic adversary. White, who was the principal author to of the Howard government’s 2000 Defence white paper, argued that we should not encourage China’s tendency to bully, but should also avoid a dangerous escalation of tensions with our biggest trading partner. White’s Quarterly Essay, Power Shift, released in September, called for new strategic thinking to accommodate the relative increase in China’s power rather than reverting to a risky policy of treating it as an opponent.

According to White, there is no reason why China should not be allowed a bigger leadership role in Asia, even if this meant the United States would have to be less dominant. His argument is that of a realist who believes it is futile to keep asserting, as Rudd and Gillard do, that the United states must always be dominant, regardless of how much the balance of power shifts.

White is trying to avoid the ultimate policy failure of a full-scale war with China. Apart from triggering a global economic crash along the way, a comprehensive victory would require the military occupation of a country with 1.3 billion people who show every sign of offering fierce resistance. Inventive tactics and high-tech weaponry would be deployed on each side, but in the end US and Australian troops would have to march into nastiest human mincing machine ever deployed. When Rudd next bluntly inserts the option of using force against China into a lunch time conversation, perhaps he might explain how he would minimise the staggering human cost on all sides. •

Brian Toohey writes monthly on national affairs for Inside Story.

It’s all about integration

The WikiLeaks revelations about Kevin Rudd’s views on China show that the foreign minister is well within the mainstream of western thinking, writes Geoffrey Barker 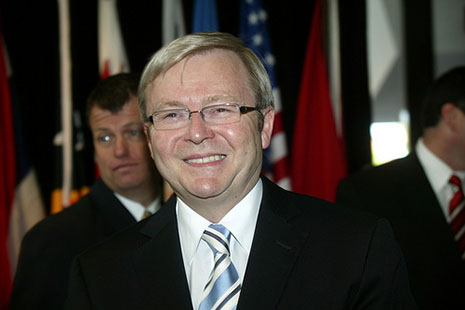