Modi and Morbi: a prime minister and a town

With an election looming in his home state, Narendra Modi risks a disaster-induced setback 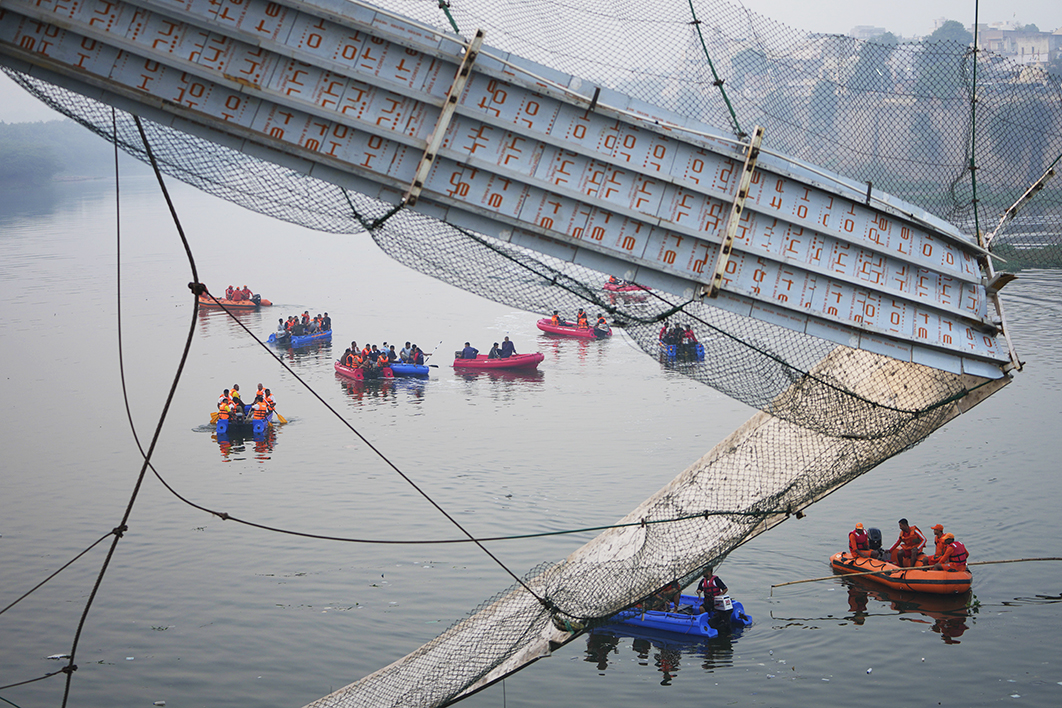 Rescuers search the Machchhu River for survivors of last Sunday’s cable bridge collapse in Morbi, in the Indian state of Gujarat. Ajit Solanki/AP

Narendra Modi has a long connection with the town of Morbi in India’s Gujarat state, where a bridge collapsed last weekend killing more than 135 people. India’s prime minister began making his name there after an even greater disaster killed more than 1800 people in 1979. A dam gave way, rapidly flooding the town. It took weeks to find the dead, and months to clean up and rebuild.

“I had worked [in Morbi] in the post-disaster relief activities as an RSS worker,” Modi later wrote, referring to the Rashtriya Swayamsevak Sangh, a Hindu-chauvinist organisation. “The town was full of mud and swampy garbage. A huge cleaning up operation was undertaken and I was part of it. We all ensured that the town was restored to pre-disaster levels and an epidemic was averted.”

That work put his name in the national media. On behalf of the RSS he received a donation of 500,000 rupees “for carrying out flood relief work in Morvi [sic] and other affected areas,” the Times of India reported at the time. He was just twenty-nine and had belonged to the RSS for more than ten years. “Armed with this experience,” as he put it, he was preparing for bigger jobs.

Modi was born and grew up in Gujarat. He built a reputation in the RSS as an organiser, joined the Bharatiya Janata Party in 1988 and was credited with being a key planner of a nationwide political road trip made by BJP’s leaders in 1990. The so-called rath yatra (chariot journey) used symbols from a popular religious television series to spread the party’s Hindu supremacist message and energise widespread enthusiasm, especially in north India, for the BJP.

Another disaster, this time in 2001, also affected Morbi and Modi’s career. A huge earthquake centred on Bhuj, about 140 kilometres from the town, brought down hundreds of buildings across Gujarat, including in Morbi, and left thousands dead and homeless. Morbi suffered widespread damage. When Gujarati voters seemed dissatisfied with the speed of the recovery, the BJP, which had ruled the state since 1995, decided a change in chief ministers was needed. Modi got the job.

Within a year, anti-Muslim riots in Gujarat, following the murders of Hindus at a railway station, killed hundreds around the state. Modi denied having encouraged the riots, but he did not try to stop them. Within the year, he won a thundering majority in state elections.

Over the next twelve years as chief minister, he won three elections and created a legend based on roads, electrification, an open door to investment, and hostility to Muslims (Gujarat is about 10 per cent Muslim). He led the BJP to national victory in 2014 and became prime minister.

Modi’s faithful home minister, Amit Shah, is also a Gujarati, and the pair pay close attention to state politics. Modi told an emergency meeting of officials and politicians in Morbi that an “impartial and extensive inquiry” must be held into the bridge disaster and “nobody should be spared.” Elections in Gujarat are due next month (results on 8 December), and newly refurbished bridges that fall down are not part of the legend that Modi has cultivated.

Opponents are holding the government responsible for the disaster and calling for the immediate resignation of the state government. Modi has made similar demands when failures have happened in non-BJP states.

The state elections are complicated by the new presence of the Aam Aadmi Party (the common man’s party), which has ruled the union territory of Delhi since 2015, winning re-election in 2020. The AAP won elections in the state of Punjab earlier this year is aiming for a state-by-state expansion. And the enervated Congress party, once India’s dominant force, retains more of a presence in Gujarat than in most other states.

Modi’s popularity in north India is indisputable, and he and his party are in no danger of losing office in New Delhi. But a setback in his home state would dent reputations.

Citizens of Morbi are seeing rapid response to the bridge disaster. On 1 November, the day of the prime minister’s visit, officials began visiting homes of victims distributing compensation payments of 400,000 rupees (about A$7500) for each person killed. •

Robin Jeffrey is a Visiting Research Professor in the Institute of South Asian Studies at the National University of Singapore.