Mortgaged to the machine

What is the cost of feeding our national appetites? Jane Goodall watches ABC TV one Monday night 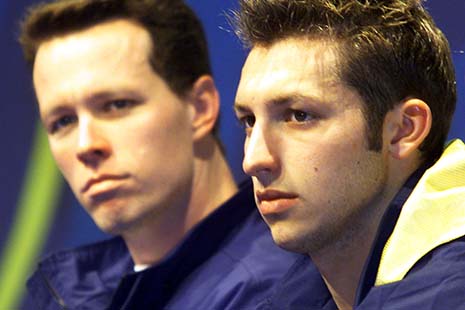 Dangerous: Kieren Perkins, left, and Ian Thorpe speaking at a press conference in Sydney a few days before the 2000 Olympics opened in Sydney. Michael Probst/AP Photo

Television programming sometimes produces strange conjunctions. Planners may have an awareness of how a drama series or a generic entertainment program will work as part of an evening’s viewing, but with timeslots devoted to current affairs or documentary, stories can converge in unpredictable ways.

Monday night’s offerings on ABC1 included the first of a two-part Australian Story feature about Kieren Perkins, a Four Corners investigation into the circumstances surrounding the disappearance of Malaysian Airlines flight MH370, and a post-budget session of Q&A with Joe Hockey. Three very different kinds of crisis drama, entirely unrelated, yet watching them in sequence, it’s tempting to look for ways they may throw light on each other, especially as the one thing they have in common is their intractability. They are all cases in which there seems to be no way out.

The Perkins story is introduced by Grant Hackett, wearing a very coached smile. He does the requisite “what a great guy” spiel, and talks of the early rivalry between them. It’s strange to discover that these two prodigies, who fought each other in the international arena for Olympic gold, started out as near neighbours. The competition, it seems, was not entirely friendly. Perkins was “dangerous,” says Hackett, though he means it in a strictly sporting sense. Rivalries at Olympic level are no longer about good chaps shaking hands, as in Chariots of Fire. As Daniel Kowalski puts it, the 1500 metres is an event in which “you go out hard and break the backs of your opponents.”

Perkins and Hackett are great Australian heroes, winners of the toughest event in their sport, but as we now know, the fight of their lives has come back in a new form. Like their fellow superstar Ian Thorpe, they have had to fend off the spectre of a future as broken men. All three have suffered from a sense of lost identity, leading to episodes of severe depression. Perkins’s marriage was a casualty, and both Thorpe and Hackett have endured a second phase of tabloid attention for very public episodes of drug- and alcohol-related breakdown. Heroism, as the cliché goes, entails sacrifices, but the traditional dramas of heroic sacrifice are not of this kind. And as consumers of heroism, what sacrifices are we, the Australian public, really asking of them?

Evidence is mounting that young Olympians are put through a range of experiences that are close to abusive. It’s not just the training – involving the most scientifically exact forms of physical and psychological management – or the unrelenting hours of work and the extremity of physical effort required of them, it’s also the celebrity factor that creates the breaking point. Then, having scarcely heaved a gasp at the end of a race, a microphone is pushed into his or her face. I remember this happening to one of the Australian team at the London Olympics, a gold medal hope who had just failed to get the touch. “I suppose you must be absolutely gutted,” said the reporter. The swimmer in question managed some kind of dignified response, but I practically choked in my seat just watching it. And I don’t recall any protest at the time, or anyone even suggesting that this is simply not okay.

Well, it’s not. Perkins’s story, like those of Hackett and Thorpe, is one that reflects badly on Australia. The cost of our national appetite for heroism is the long-term psychological health of the young adults who carry the burden of our collective dreams and ambitions. It’s not only the performance-enhancing drugs that have taken away the innocence of the Olympics, it’s also the consensual delusions and the greed for myth-making that have become their driving force.

What makes a nation look good – or bad? Malaysia didn’t look good during the early days of critical speculation about the fate of the missing aircraft MH370. Malaysian defence minister Hishammuddin Hussein was working under constant pressure to give the press and the distressed relatives the best available information and maintain a demeanour of responsible concern, but it was all getting messier by the day.

In this meticulous investigation, Four Corners reporters Caro Meldrum-Hanna and Wayne Harley go line-by-line through schedules and log books, and talk to dozens of pilots, air traffic controllers, satellite engineers and, finally, Hishammuddin himself, who grants a private interview and allows himself to be confronted with some embarrassing findings.

The plane went out of contact during the transition between Malaysian and Vietnamese airspace, which suggests that the communications systems were disabled at a strategic point. And that implies both expertise and malicious intent on the part of someone on board. According to one of the pilots interviewed, the communications transition from one airspace to the other is routine and seamless, yet it took Ho Chi Minh airport some twenty minutes to call in about the missing signal. Then there were three “stunning errors” in the reporting of how and where the aircraft had been tracked from Kuala Lumpur, directing the search-and-rescue operation to the wrong area. In fact, the plane had dramatically changed course and taken a path directly over the military radar station in Penang, where it could have been on the screens for forty minutes, but no report was made.

Confronting interviews with leading politicians typically produce heat but very little light, and none of the questions put to the minister gained a clear answer. As Kerry O’Brien says in his wrap-up at the end of the program, it’s shaping up as “the perfect crime.” Absolutely fascinating, in that sense, but it leaves a host of unresolved questions.

Most of us would feel we know something about honour and honesty as individuals, but when it comes to being honest about ourselves as a nation, that’s a whole other ballgame. We like to accuse politicians of dishonesty, but are their failures here anything other than a reflection of our own?

I didn’t have much appetite for the Hockey interview, because the questions and answers seemed all too predictable. You could have scripted it in advance from the already repetitive media discussion over the past week. It’s all propaganda, and propaganda contains no surprises. Hockey can be personable enough, when he’s not smoking a big-shot cigar with an unseemly grin on his face, or in company with Christopher Pyne, making remarks of the kind you expect to hear in Summer Heights High. You can’t fool all of the people all of the time and he gave the impression for at least some of the time of at least attempting to be honest.

But at the heart of it, that’s a lost cause. He’s the spokesman for a government hopelessly mortgaged to a propaganda machine, and the inevitable story of the terrible black hole in the country’s budget, bequeathed by their dastardly predecessors, remains the premise that may yet persuade voters back to them, even if the cuts made ultimately cause a recession, as they indeed might. It’s all very well adding up how many $7 bills at the GP might blow a family’s budget, as one questioner earnestly did, but the prospect is much larger than that. If enough people lose their jobs, and more live in fear of losing them, if enough people are cut off benefits and pensions, the retail sector will start to cave in, and after that hospitality, tourism… What price do we want to pay for believing what we want to believe? •