There’s plenty wrong with how the Murray–Darling is being managed, but Wall Street isn’t the culprit to target 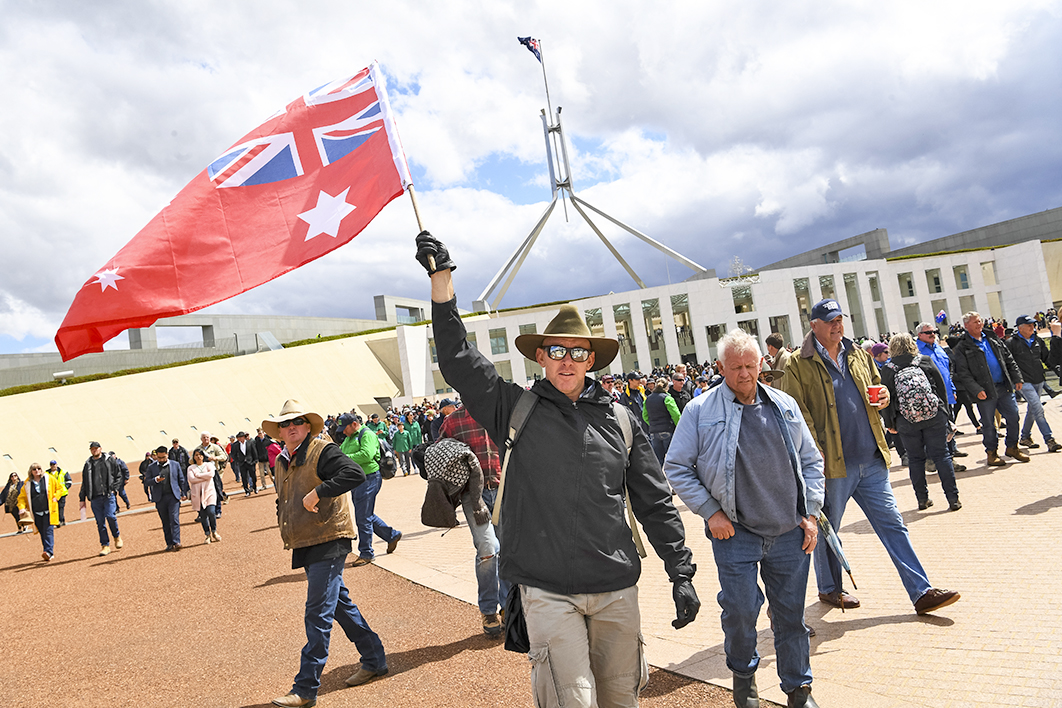 Too much politics, or the wrong kind? Farmers calling on parliament to “Can the Plan” in December 2019. Lukas Coch/AAP Image

“Water policy is hard,” Malcolm Turnbull told Scott Hamilton and Stuart Kells when they were researching Sold Down the River. He would know: he was minister when the system of water trading that Hamilton and Kells excoriate was being designed and implemented.

Turnbull’s words sum up why many people avoid trying to understand what’s going on in the Murray–Darling Basin — its ecology, productivity and politics. So it’s good we now have a mini genre of engagingly written Murray–Darling books, including Richard Beasley’s Dead in the Water — which is mainly a forcefully expressed version of the conclusions of the South Australian royal commission into the Murray–Darling, for which he was the counsel assisting — and Quentin Beresford’s forthcoming Wounded Country.

The focus of Sold Down the River is water trading, and what the authors believe has happened since water markets were created in the 1990s by separating water rights from the ownership of land. But the book oversells itself. The subtitle claims it shows “how robber barons and Wall Street traders cornered Australia’s water market.” The book doesn’t do this. That’s not to say water markets don’t have their problems, and the authors detail some of them — but they overstate their central case.

Earlier this year, the Australian Competition and Consumer Commission released the final report of its inquiry into water markets, which uncovered flawed market data, inequalities in access to information, and inadequate or non-existent regulation. What is needed, the ACCC declared, is “decisive and comprehensive reform.”

Water minister Keith Pitt announced he would set up an expert panel to devise the government’s response to the report, and $3.5 million was set aside for this purpose. But earlier this month the minister’s office confirmed the panel had not yet been appointed, nor its terms of reference set.

Why? Doubtless, part of the reason is that it rained, which always takes the political heat out of water policy. Meanwhile, Barnaby Joyce’s return as leader of the National Party saw the water portfolio shoved out of cabinet. There are many cynics in the world of water policy, and it isn’t hard to see why.

This means that Hamilton and Kells, while they don’t cover these recent events, aren’t wrong to smell many rats. But I’m not sure they are chasing the right ones.

They write from a position of profound scepticism about free markets, and in particular the Hawke–Keating government’s policies of deregulation, including opening Australia up to foreign banks. But before they get to the politics, they give us an elegantly written, sometimes lyrical, summary of the Murray–Darling Basin and its history. Those trying to get their heads around the issues could do worse than read it.

Even here, though, there are some notable omissions. Crucially, Hamilton and Kells don’t deal in detail with the big buybacks of water conducted under the Rudd government. Yet they claim that “emphatic social, economic and environmental evidence” shows “the process of buying environmental water from farmers [has] failed.” That isn’t the case, or at the very least is disputed. Buybacks certainly affect rural communities, but as several inquiries have found it is hard to separate their impact from all the other reasons for rural decline.

Indeed, the SA royal commission — referred to approvingly by the authors elsewhere — agreed with the Productivity Commission and several academic studies that buybacks were probably the cheapest, most efficient and to date most successful way of dealing with water over-allocation. The current government is wrong — and politically craven — to rule them out.

Here, Hamilton and Kells reflect the bias of their sources. They make much of the many interviews they have done with irrigators, but the sources identified by name mostly come from a vocal and highly politically involved group of Riverina irrigators. These people have long been hostile to buybacks, and more broadly to the idea that more water needs to be allocated to the environment.

Riverina irrigator Chris Brooks, for example, is quoted at length. A former chief executive of commodity trader Glencore, Brooks has backed Shooters, Fishers and Farmers Party candidates in New South Wales, and more recently announced he will support four independent or minor party candidates in government-held seats at the next federal election. He is considering running for the Albury-based seat of Farrer, currently held by Liberal Sussan Ley.

Brooks was also the main figure behind the “can the plan” protests of December 2019, in which irrigators blockaded federal parliament. He and people with similar views may balance the outsized influence of northern basin cotton farmers on federal politics and the National Party in particular, but they have not yet done more than represent their own sectional interests. Most are populists, offering simple “solutions” to complex problems.

From that perspective, the central narrative of Hamilton and Kells’s book — the argument that robber barons and overseas traders are manipulating the water market — is convenient and appealing.

But what about the evidence? Hamilton and Kells identify some of the problems with water markets, but the evidence for their central allegation of widespread market manipulation doesn’t get beyond the anecdotal and the presumptive. Their “central finding,” they say, is that policymakers made the “critical assumption” that the best economic use of water would also provide the highest financial return.

Whether the free market can be relied on to deliver good outcomes in water management is open to debate, of course, as is the question of whether financial returns are the only kind of “value” that should be considered. If we went purely on profitability, for example, we would accept the decline of small family farms, and rice growing and dairy, in favour of big corporately owned almond plantations and cotton farms. We would ignore the social value in a diverse farming sector and put to one side issues of national sovereignty and food security.

We are not doing those things, or not completely. River managers are universally worried about the proliferation of almond plantations on both sides of the South Australian border, all planted on newly irrigated land thanks to the owners being able to buy water on the open market.

Almonds are a thirsty crop. Delivering water to them already places a big strain on the capacity of the system, and the trees are mostly not yet mature. Victoria has imposed an embargo on new plantations, and South Australia and New South Wales are under pressure to do the same.

In other words, governments are not prepared to simply let the market rip. But nor, it seems, are they prepared or able to tackle the hard water-policy questions in a systemic way. And things drift, meanwhile, in disastrous directions.

But what of the authors’ central assertion — that big institutional investors are manipulating the market, hoarding water and creating artificial scarcity to maximise their profits? “If governments don’t act quickly,” they say, “basin agriculture will become a kind of irrigated Ponzi scheme, with over-investment in unsustainable crops and megafarms.”

They go on: “We are more than confident that, if and when a future audit or inquiry looks at this aspect of Australia’s water market experiment… regulators will have a lot of explaining to do… If you listen very carefully right now, you can hear the haptic hum and crackle of traders and agribusinesses shredding documents, deleting files and destroying USB sticks that contain evidence of their coordination and partnering.”

This last allegation is not supported by a reference — not even, as with some of their other assertions, to an unidentified interviewee.

The best evidence on whether institutional investors are manipulating the market is the ACCC’s water markets report. It certainly identified serious problems, but it found no evidence of market manipulation, despite extensive analysis and investigation, and despite using the ACCC’s powers to force data out of the big traders. This is the best information we have, and there is nothing in this book to force a reassessment.

Nor is the idea that the institutions have “cornered Australia’s water market” supported. In 2018–19, according to the ACCC, institutional investors accounted for an estimated 11 per cent of water allocation volumes purchased and 21 per cent of water allocation volumes sold. While the influence of institutional investors is growing, the main traders in water are those who use it — irrigators, agribusinesses and government environmental water holders. And, just this month, the Productivity Commission issued data showing that foreign entities own only 11 per cent of water entitlements in Australia (not only from the basin).

Hamilton and Kells refer to the ACCC report, describing its criticism of the market as a backflip on previous work. But they don’t deal with these conclusions, which undermine their central thesis. (They also describe the report as being published in 2020, when in fact it was 2021. Perhaps their publishers’ deadlines forced them to rely mainly on the interim report.)

So what do Hamilton and Kells think should be done? They suggest a “citizens assembly” drawn from across the basin to “make the high-level decisions about how to allocate water in the Basin.” They think that limited local trading should be allowed between farmers as a means of water management rather than for profit. Market players who are not connected to land should be forced out. Finally, they suggest “bipartisan agreements” between governments and a role for “a reconvened national cabinet” to oversee Murray–Darling reforms, including a cross-party, cross-jurisdiction standing committee reporting to the national cabinet. Well, that would be nice, wouldn’t it?

But it isn’t clear why those arrangements are either achievable or would lead to better outcomes than the endless negotiations of the Council of Australian Governments or the Murray–Darling Basin Authority, which after years of top-down autocracy is now showing signs of fostering genuine community involvement.

As Malcolm Turnbull’s comment indicates, it is a fantasy to think you can take the politics out of water. Rather, we need better politics. As the ACCC reported, the “robber baron” narrative combined with poor market design and flawed data has undoubtedly fed a lack of confidence in water markets. This book — more a polemic than an exposé — together with the current government’s culpable lack of action, will add to that lack of confidence. •

Margaret Simons is a journalist and writer. Her books include Cry Me a River: The Tragedy of the Murray–Darling Basin and Penny Wong: Passion and Principle.

Developing countries could experience a wave of financial pain when the rich world lifts interest rates. But it doesn’t have to be that way 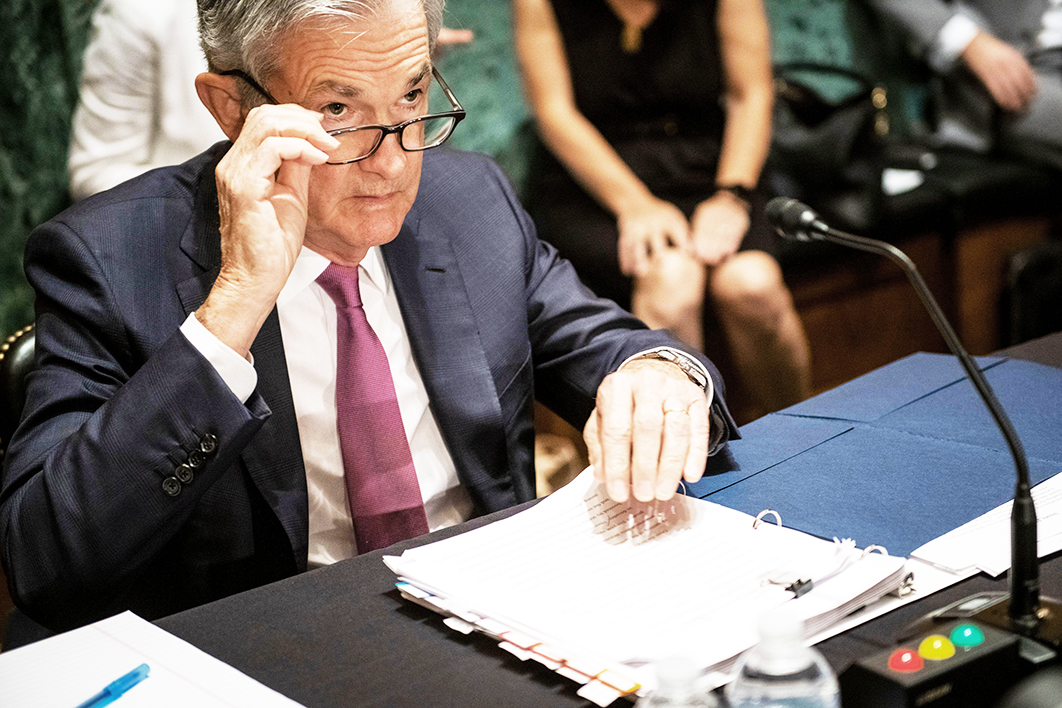