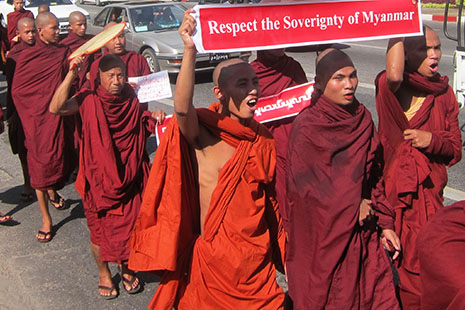 A FEW weeks ago, I stumbled into a protest on the streets of Yangon, the cultural capital of Myanmar. The march itself was a relatively tame affair, with around 500 people braving the afternoon heat to walk to downtown Sule Pagoda. Despite the calm mood, though, the protest provided a telling glimpse of how an exclusivist anti-Muslim nationalism is mushrooming across Myanmar.

I had already witnessed a few rallies during my month in Myanmar, but this one was a little different. As my taxi approached I could see that a majority of the protesters were wearing the maroon-coloured robes of Buddhist monks. The sangha, or monastic institutions, famously led the 2007 “Saffron Revolution” after runaway inflation caused an economic and political crisis. The government’s brutal response to those protests destroyed the moral credibility of the ruling military junta. With the inflation figure running at well over 7 per cent this year, and anecdotally much higher in Yangon, I wondered if this was the beginning of a similar moment of uprising.

As we drew closer to the marching crowd, I began to make out the signs and banners. Rather than focusing on cost-of-living issues, this protest had a different and very specific target: the Organisation of Islamic Cooperation, or OIC, the international body led by the foreign ministers of the world’s Muslim-majority countries. An OIC delegation was scheduled to visit the conflict-wracked region of Rakhine the following week to investigate the impact of violence on Muslim communities. These monks were opposed to the OIC’s “undue influence,” as one protester put it, in the “internal affairs” of Myanmar.

As the International Crisis Group noted in October, communal violence between ethnic Arakanese Buddhists and stateless Muslim Rohingya communities in Rakhine has spiralled into broader religious tension throughout the country. In March, brutal anti-Muslim violence broke out in the central city of Meiktila – hundreds of kilometres from Rakhine State – killing forty-three people and destroying more than 1300 homes in Muslim neighbourhoods. This was the first time that the broader category of religion – rather than the Rohingya issue in particular – had become the primary focus of communal mobilisation. Now, protests have evolved through word-of-mouth and online social networks to focus on a target, the OIC tour, somewhere between the two issues.

I wondered whether the religious tone of the protest was obvious to my driver. As the traffic slowed to a crawl, I asked him if he knew what the OIC was. He shook his head in the negative. “Oh-Eye-See…?” he muttered to himself as we sat in the traffic jam, as if solving a maths problem.

I jumped out of the taxi and, jogging beside the march, read some of the English-language posters: “NO OIC,” said one of the larger posters. “Respect the Sovereignty of Myanmar,” said another. Others were more inflammatory: “Get out Bengalis!” suggested a mass-produced A4 poster, referring to the frequent claim that Muslim Rohingya are migrants from Bangladesh. “STOP Terrorist proxy!” said another.

After a few minutes, the traffic began to speed up again. I hopped back in the taxi to find my driver loading Facebook on his Huawei smartphone. He posted two photos of the protesting monks, along with a comment railing against the OIC. Barely five minutes before, he had never heard of the organisation.

Posters and stickers featuring the number “969” were the most visible evidence of communal tension I encountered while travelling through eight of Myanmar’s fourteen states and divisions, interviewing ethnically, religiously, economically diverse populations. That auspicious sequence of numerals, which represents the core tenets and practices of Buddhism, has become the symbol of a prominent anti-Muslim social movement with clear links to the regime. The number is usually accompanied by the Buddhist flag and dharma wheel, lending heavy-handed moral credibility to the sociopolitical proclamations of the movement’s leaders. Across Myanmar, from Lashio near the border with China, and Sagaing outside the northern city of Mandalay, to Hpaan a hundred or so miles from Thailand, I saw 969 stickers everywhere – in restaurants and taxis, on street stalls and motorbike helmets.

Beneath the highly visible campaign, I found wide acceptance and coy endorsement of the 969 movement’s key messages. The vast majority of around seventy Buddhists I interviewed expressed some form of anti-Muslim sentiment. Many repeated claims made by 969 leaders: that Muslims dominate Myanmar’s economy; that they refuse to socially and culturally integrate; that they “cause trouble”; and that Islamic terrorists from “Arab countries” are flooding into Myanmar to wage religious warfare. Such sentiment was more common or more vicious in some areas than others, but the themes and the phrases were consistent.

Few were willing to speak with me about the objectives of the 969 movement, however. “It’s complicated,” said a shopkeeper who had hung a 969 poster out the front of his stall in Hpaan. A taxi driver in Mawlamyine, who supported the movement, was reluctant to give specifics. “You should really ask a monk – they could tell you more,” he said. When I raised the issue with monks directly, they changed the subject or gave answers that glossed over the movement’s political character: “969 is a symbol of peace,” said one in Yangon, echoing similar statements made by Myanmar’s president Thein Sein earlier this year.

Anti-Muslim sentiment in Myanmar is not new. Indeed, along with anti-Chinese and anti-Indian prejudice, it has been stoked by successive regimes since independence in 1948. The question is whether this sentiment is used to organise for violence.

Disturbingly, patterns of carefully planned mobilisation can be seen in most incidences of anti-Rohingya and anti-Muslim violence so far. Street scuffles or other triggers for conflict occur in towns; rumours apportioning blame circulate through offline and online social networks; mobs appear, demanding retribution; and then, inevitably, comes the violence. While each side experiences casualties and damage to property, Muslim families and neighbourhoods are disproportionately affected.

These patterns have been seen repeatedly in Rakhine State as well as in the March 2013 Meiktila violence, lending credence to those who believe that “dark forces” linked with military elements are organising or at least condoning communal violence to disrupt the transition to civilian government.

Perhaps underrecognised amid the rush to apportion blame is the role of Myanmar’s infant information culture in spreading vicious rumours that compound conflict dynamics. Few Burmese consume news and information from independent media sources, a legacy of the censorship regime that only formally ceased in August 2012. The result is that more than twice as many people have a Facebook account (800,000) as purchase even the most popular weekly newspapers (300,000). The majority of Myanmar’s estimated population of sixty-five million people hears about political developments by word-of-mouth from family, friends, neighbours and monks.

Even without the direct involvement of military or monastic forces, these are ideal conditions for identity-based violence to spread and escalate. Studies of Hindu–Muslim communal riots in India suggest that the rampant transmission of rumours within cities, with little elite intervention to calm tension, quash rumours and quell mobilisation, is the strongest predictor of communal violence. Indian cities without intercommunal associations such as sports clubs or business groups have tended to experience much more severe riots over time.

With 80 per cent of Myanmar’s population projected to own a mobile phone by 2015, whether and how the rapid growth of already-dominant networking tools such as Facebook will affect the dynamics of rumours and prejudice is unclear. Certainly, the speed with which the Rakhine violence and Rohingya issue has morphed into broader anti-Islamic sentiment, often through social media, has spooked Muslims throughout the country.

Many of the Muslims I interviewed talked darkly of the bloody images and videos of the Meiktila violence their friends had sent them or they had seen on their smartphones. Alarmed by these images and the visual spread of the 969 movement, dozens of them told me that they see the writing on the wall. “We will become the target,” one Muslim teacher in Mandalay Division said guardedly. “Actually, we already are,” his neighbour interjected.

Around half of the Muslims I met are hoping to seek asylum elsewhere in the region prior to the 2015 election, fearing that the 969 movement will successfully pressure parliamentarians to pass more severe anti-Muslim laws, such as a proposed ban on intercommunal marriage.

The security implications of continued escalation in anti-Muslim sentiment could be immense. There is a strong possibility that worsening of religious tensions could create new opportunities for regional terrorist networks such as Jemaah Islamiyah to fundraise and recruit for violent jihad in Myanmar, a senior Indonesian public official told a colleague of mine recently. Such organised communal violence would polarise Buddhist–Muslim relations across Myanmar for decades, possibly irreparably.

Out of an estimated two million Muslims in Myanmar, many may choose to flee to a neighbouring country where Muslims are the majority if intercommunal relations continue to deteriorate. The flight of thousands of Rohingya to Bangladesh and Thailand over the past eighteen months has already tested the willingness of Myanmar’s neighbours to cope with its displaced populations. As Myanmar takes on the presidency of the Association of South East Asian Nations, or ASEAN, and prepares to host major annual meetings of regional leaders in the new capital, Naypyidaw, in early 2014, the bubbling of Muslim–Buddhist tension will be fresh in the minds of delegates.

MYANMAR’s political transition has been a major success story for ASEAN. Yet it’s almost certain that the poor performance and potential complicity of police and military in previous incidences of anti-Rohingya and anti-Muslim violence – not to mention the absence of any meaningful grassroots or national-level process of inter-religious peacebuilding and dialogue, the reluctance of most Burmese politicians, including Aung San Suu Kyi, to discuss the Rohingya or 969 issues, and potentially even the rampant prejudice of Burmese social media – will be raised at the meeting in Naypyidaw, especially by those most likely to bear the brunt of asylum seekers, including Muslim-majority Malaysia, Indonesia and Brunei.

With Myanmar heading towards elections in November 2015, the contest over national identity is only likely to intensify. In the medium term, sensible, plural and well-moderated media are necessary to curb incendiary hate speech, as are offline and online interventions aimed at quelling rumours and urging non-violence at both the elite and grassroots level. If concrete actions are not taken to moderate the extremes of Myanmar’s infant information culture and manage religious tensions, more serious questions about regional resettlement of Muslim asylum seekers will begin to be asked. •

Gerard McCarthy is Director (Asia-Pacific) at TechChange and a PhD candidate at the Australian National University. 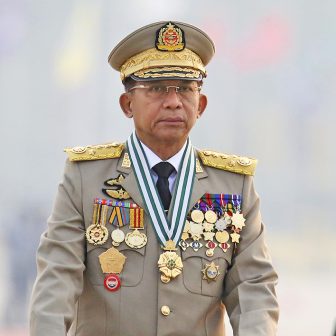 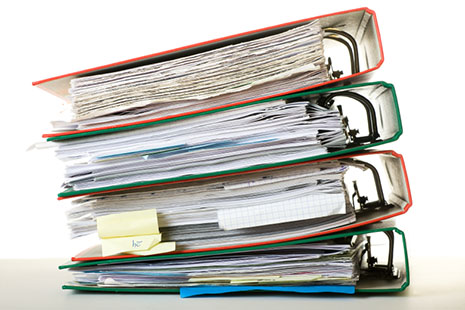