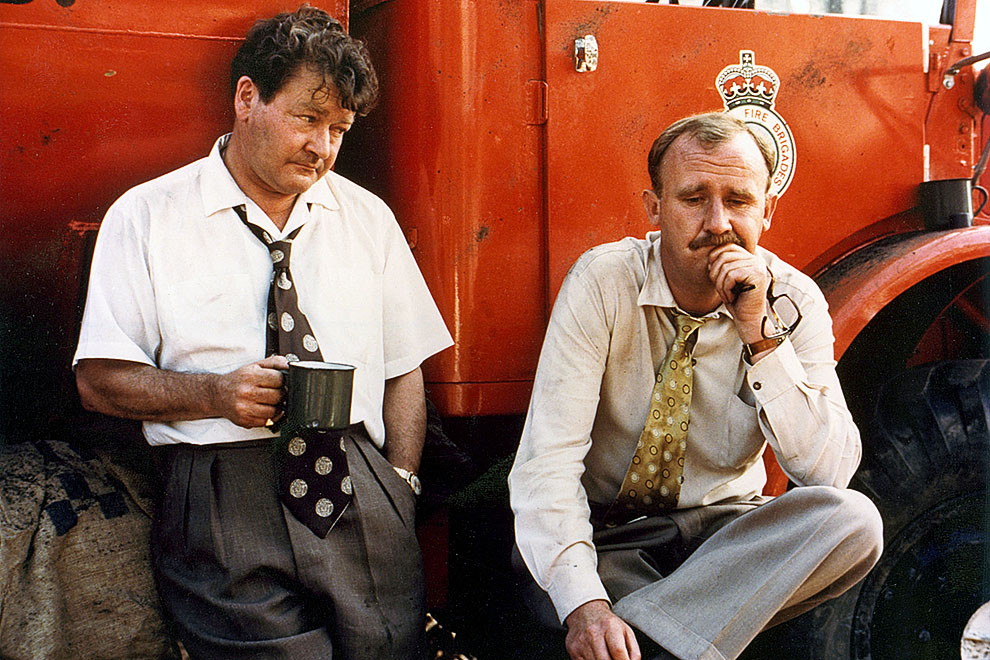 As much history as fiction: John Ewart (left) and Bill Hunter in Newsfront. AAP Image

Cinematic memory is something of a jungle; we misremember films seen long ago, or else recut them to suit ourselves. At the end of a packed conference on media history at the National Film and Sound Archive in Canberra earlier this month, we were treated to a rare screening of Newsfront (1978; director, Phillip Noyce) in a restored print. However it can be faulted, this invaluable work is as much history as fiction. Its re-creation of the last days of the cinema newsreels is irreplaceable; how many now can remember the advent of television in the mid 1950s, with its impacts on film crafts so quickly made obsolete, thrown backwards into history?

Newsfront was the liveliest work on that 1970s list, the days of the feature-film revival and the beginnings of film-craft training at the newly established national film school. Cinematographers, producers, editors, directors and even writers were making their names; journalists backed them energetically, and with all the prestige of the director as artist, the energy was, insistently, for the industry rather than for cinema. Paradoxically, the re-established industry was there to produce art films – high-end, internationally tradeable objects – or, in another corner of the scene, the brash populism of Alvin Purple and his kin.

Newsfront, a sizeable production for Australia, rated as prestige cinema, but it was still a cure for the era’s tasteful costume dramas; watching it now – different as it is in the present, and with all the questions it raises – it still buries the likes of Picnic at Hanging Rock. The first run lasted nearly a year; and Phillip Noyce remembers how, in 1978, it drew audiences hungry to see their own worlds on the screen. Every young reporter of the day knew blokes like Len Maguire, as played with total conviction by Bill Hunter, the kind of forthright, honest-to-god cameraman that no major shoot could do without. Shouldering a tonnage of equipment for Cinetone News (read Cinesound), flanked by offsiders and rivals, his Len Maguire gets up close for the bushfire shots, tracks the amazing Redex motor trials, and faces the Maitland floods (filmed on the Narrabeen lakes) ploughing hard into the water.

Len is a cheerfully unthinking conformist; he makes a good Catholic boy’s marriage to Fay (Angela Punch McGregor), who goes through her several unavoidable pregnancies with a determinedly pained expression. We see Len hanging up his clothes in a separate bedroom; then things develop with one of Cinetone’s production team, the stunningly beautiful Amy (Wendy Hughes). Rivals are also mates; one of those is Charlie, played by John Ewart with a fine turn in neo-Shakespearean lines; “’Twill serve,” he says, swigging an inferior potion. An improbably close-shaven John Flaus, in his first role in a feature, plays a priest obsessed with fighting the communist menace. Len’s brother Frank (Gerard Kennedy) isn’t a mate; he’s shamelessly on the make – in the lingo of the day, a real spiv, and they’re at odds; Frank sells out, and heads off to Hollywood. (The irony here is that Noyce, like his coevals Bruce Beresford, Peter Weir and others, did just that, while occasionally dropping in on home visits to make, for instance, Rabbit-Proof Fence. They haven’t been seen as selling out, just climbing towards success.)

Newsfront was one of those films in which the robust pleasure taken in the making is communicated vividly on the screen. I have it on good authority that through the course of production all those years ago, the lead roles, cast and crew had a lot of fun, and it shows – still. The locations in western New South Wales, Gulgong, Dunedoo, Narrabeen and central Sydney do their work, giving us a world in its time. All that acknowledged, a film seen again after thirty-seven years is inevitably a different film; the present-day experience catches up intervening memories, and changed expectations of local film-making and of cinema at large. That cumbersome camera equipment, so vividly a part of Newsfront’s narrative, is replaced by small, magical, handheld devices as likely to be controlled by women as by men, and rightly so. Those wide editing tables with their giant reels are no more; the decisions once taken on them are effected swiftly on keyboards and computer screens; and gender subordination in production roles doesn’t go unquestioned, far from it.

On the negative side, the perennial worries around the welfare of the treasured industry register in the talk around it, never more so than when the products (sic) come to general attention at the time of the annual awards staged by AACTA (the Australian Academy of Cinema and Television Arts), presenting the country’s most visible prize-giving. This year the prominent winners were George Miller’s Mad Max: Fury Road and Jocelyn Moorhouse’s The Dressmaker. I can’t find anyone prepared to defend the former, seen as quite unworthy of its antecedents, while The Dressmaker is a seriously bad film from start to finish. Even distinguished actors – Judy Davis, Hugo Weaving, Kate Winslet – can’t rescue a lame and disjointed script, or save a small-town story when the setting is neither established nor visually explored. It does seem to be making money; let the gains be used to better filmic purpose. If you can, find a DVD of Ray Argall’s modestly excellent Return Home (1990), which told this kind of story with a proper, quiet eloquence.

Meanwhile, there’s a puzzle to contemplate; what standards are in operation when The Dressmaker can be held to outclass a genuine, character-driven work like Last Cab to Darwin? Michael Caton did get the best actor award for his wonderful work as Rex, an ageing Broken Hill taxidriver whose doctors tell him he’s got three months left to live. If there’s a grandchild of Newsfront in its grip on Australian realities, we have it here. Rex heads into the Northern Territory to take advantage of newly instituted laws allowing euthanasia; it’s a long ride, and for his own reasons, he goes via Oodnadatta. He has one close relationship, with Polly, an Indigenous woman played with comic ferocity by Ningali Lawford-Wolf; she’s very much in charge of herself, but she can’t do anything for Rex until he decides to allow it. As other plot elements suggest, black–white relations, out there in a country town back street and on the road, are more complex and just possibly more positive than city-suburban audiences might assume.

Reg Cribb’s script, from his play, wobbles here and there; the film, like Rex’s ride, could be shorter; but the changing landscapes, desert into jungle and back, are more than minor characters. We have here another return home story, one that couldn’t have been made in the Newsfront period; gentle as this film is, it registers elements that, in 1978, were a long way outside the frame. Last Cab to Darwin is one film that knows which country we’re in. •

He’s not the Messiah…

What next? Dean Lewins/AAP Image 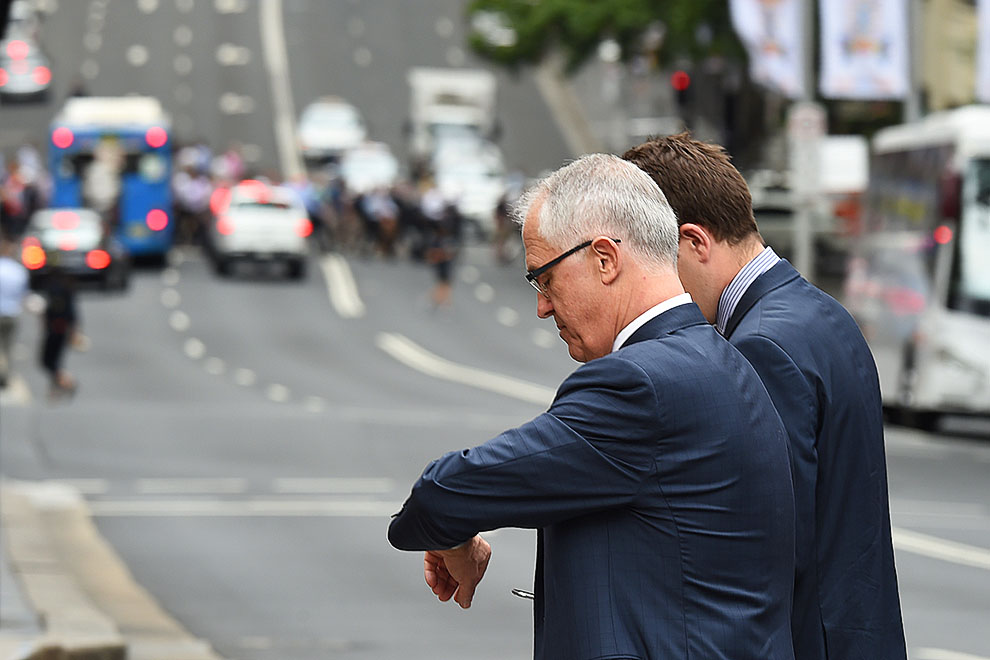 What next? Dean Lewins/AAP Image