No need to let it rip

The experience of the renewable energy target suggests that a carbon tax will work better than a market-based approach to climate change, writes Brian Toohey 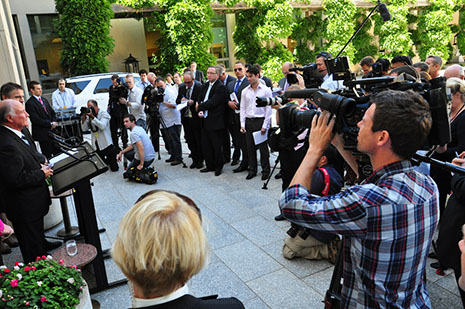 Members of the Multi-Party Climate Change Committee at the announcement of the date for the introduction of a carbon price. Australian Greens

BY most accounts, the independent federal MP Rob Oakeshott is a thoughtful person who would not normally see many advantages in trying to solve a complex human problem by “letting the market rip.” But although he supports Julia Gillard’s minority Labor government, he objects to its decision to use a tax to put a price on greenhouse gas emissions for three to five years. Even though Labor says it intends shifting to an emissions trading scheme, or ETS, in no later than five years, Oakeshott wants, as he puts it, to let the market rip right from the start.

Gillard’s decision is curious. She is prepared to cop the political odium of imposing a tax without leaving it on long enough to gain the advantages it offers over an ETS. It is not clear that either she or Oakeshott fully understands that the products traded in an ETS – permits to pollute – are similar to the financial derivatives that wreaked such havoc when markets were “let rip” before the economic meltdown in the United States and Europe. Neither seems to understand that old-fashioned government regulation lies at the heart of a cap-and-trade system like an ETS. Without a reducing cap imposed by regulation, there will be no cut in emissions.

The trading market is not essential for the cuts. It only exists because a government sets it up in the hope that it will make the process of meeting the caps more efficient. This is unlikely. Prices in an ETS are inherently volatile, making it harder for businesses to calculate the likely returns when deciding whether to invest in low-emissions processes.

Just as has occurred in the European scheme, price volatility has plagued the crude version of emissions trading already operating in Australia. The history is instructive, even if politicians continue to ignore the lessons. In designing Australia’s renewable energy target, both sides of politics decided to bolt on an artificial market to trade a financial derivative called a renewable energy certificate. The market has been so badly distorted by disastrous design flaws that there is now a strong possibility that the target won’t be achieved. In a disturbing sign, the big energy company AGL recently cancelled a planned $2 billion investment in wind power in Victoria because certificate prices had fallen too low to make if financially viable.

Perhaps this will change after the government releases the details of its proposed tax on emissions, which should make renewables more attractive. But any investor in clean technology would have to be worried by opposition leader Tony Abbott’s promise to abolish the tax if the Coalition wins the next election. Without the price penalty the tax imposes on dirty technologies, the investment might no longer make financial sense. Similar considerations apply to the price uncertainty that will follow when an ETS replaces the tax.

Although it was an unnecessary complication, this arrangement just might have worked if Kevin Rudd’s government had not flooded the market by issuing certificates for household purchases of solar hot-water systems and heat pumps, despite the fact that they do not generate any electricity. Just as perversely, the government decided that people who install roof-top solar electricity system should get five times the number of renewable energy certificates as firms that produce electricity from other renewable sources (including large solar-thermal and photovoltaic power plants).

Unlike solar hot-water systems, rooftop solar cells at least produce electricity. The trouble is that the government pretended they produce four times more electricity than they do. Apart from receiving one certificate for each genuine megawatt of clean energy, owners of rooftop solar cells were given another four certificates for “phantom” energy that would never be produced. The oversupply of certificates saw prices – and investment – collapse. Rudd’s ETS – the scheme that his successor is likely to copy closely – would also have issued so many free permits that it would have become much harder to cut emissions.

After Greg Combet became parliamentary secretary for climate change in February 2009, he introduced changes to the renewable energy target to isolate the destructive impact of the special treatment it gives to people who buy small-scale solar equipment. But a large number of certificates for phantom electricity still overhangs the market, driving prices below what’s needed for companies like AGL to invest. The pity is that the Rudd government’s own studies showed that a well-designed target would have been a low-cost way to increase the use of zero-emissions technologies to generate electricity.

Why the Gillard government wants to raise the financial markets’ hopes that it will move to an ETS after three to five years is a mystery. It would be better to have a tax, escalating at specified levels for each of the next ten years, after which the government could consider if a viable global market for trading existed.

Unfortunately, the government seems determined to saddle its new tax, and its ETS, with the counterproductive task of raising revenue to compensate just about every business and family that might be hurt, no matter how slightly. When governments put up the excise on tobacco to help reduce the harmful side effects, they don’t give smokers cash compensation so they can keep buying as many cigarettes as before. Nor do they compensate the tobacco companies. If the prime minister isn’t careful, the detail of the compensation for the new tax will end up resembling the thirteen volumes of legislation for Rudd’s ETS, which rivalled the tax act for complexity.

The key to making good use of the revenue from the new tax is to confine almost all payments to adjustment assistance, not the unconditional compensation that would have chewed up all the funds raised by Rudd’s ETS. Adjustment assistance should go to those willing to shift to a low-emissions economy and to those who lose their jobs in firms that won’t, or can’t, change their polluting ways. The craziest aspect of Rudd’s ETS was that it promised $7.3 billion compensation to brown coal–fired generators on the condition that they didn’t shut down – they only got the loot if they kept polluting.

Focusing adjustment assistance on firms willing to make the transition to a low-carbon economy has two advantages. First, it accelerates the deployment of low-emissions technologies that are crucial to the least-cost transition. Second, subsidising the deployment of this technology in the initial stages helps keep prices down for consumers. This should reduce the political pressure to pay high levels of compensation directly to households to spend in ways that may have nothing to do with cutting emissions.

As the government’s climate change adviser, Ross Garnaut, has explained, modern economic theory recognises the broader benefit that can come from government subsidies for researching, developing and deploying new technologies. Once promising technologies are deployed, they can move down the cost curve over time.

But governments should not try to pick the winning technologies, as they have done with carbon capture and storage equipment for power stations. Because of the huge amounts of power needed to compress the carbon dioxide produced when fossil fuels are burnt, the process is inherently more expensive than alternatives with plenty of scope to cut costs.

It is now clear that no government is going to let a price on emissions (either through a tax or an ETS) go high enough to do the job on its own. Even without this constraint, economists in Treasury and the climate change department accept that complementary measures are required, such as assistance to make the necessary technological transformation. The best chance of a satisfactory outcome would be for firms willing to commit their own money to bid for extra funding on the basis of the quantity of emissions they will cut per dollar of assistance. This method of allocating funds, however, can’t routinely be applied in the early research and development phase when the risks may be too high to attract private finding.

Meanwhile, the core purpose of putting a price on emissions is undermined by existing subsidies that increase the consumption of dirty fossil fuels. On Wednesday, the Greens deputy leader, Christine Milne, once again stressed how the transition would be less costly if the government stopped handing out $11 billion a year for these subsidies to the fossil fuel industries. This amount is enough to help deploy a lot of clean technology, with enough left over to provide the $6.3 billion the Productivity Commission says is badly needed to improve the lives of disabled people and their carers. •

Egypt’s middle class is determined that the revolution will lead to real change, writes Tarek Osman in Cairo

Above: An Egyptian man writes the date of the revolution on a national flag.
Photo: Rami Halim/ iStockphoto 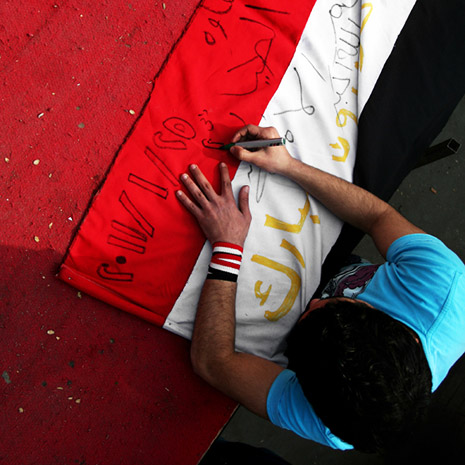 Above: An Egyptian man writes the date of the revolution on a national flag.
Photo: Rami Halim/ iStockphoto