Labor can’t win against the Coalition in a contest to crack down on boat arrivals, writes Peter Browne. It’s time for a rethink 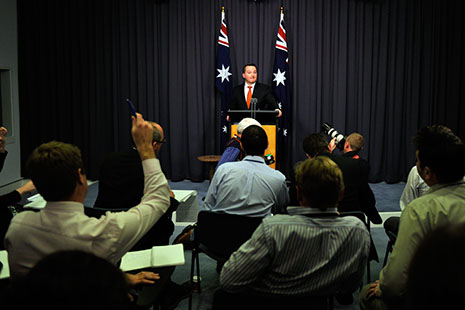 This week’s High Court decision might be a blow to Julia Gillard’s leadership, but the court did Labor a favour when it vetoed the Malaysian Solution. Outsourcing Australia’s obligations under the Refugee Convention would have set the government up for a series of mishaps and scandals, keeping the debate about asylum seekers alive and damaging until the next election.

The court’s decision gives the government the opportunity to reverse the course it set when Kevin Rudd intervened in the immigration portfolio in October 2009 to return seventy-eight asylum seekers to Indonesia after they had been transferred to an Australian Customs ship, the Oceanic Viking.

As the refugee law specialists Savitri Taylor and Brynna Rafferty-Brown wrote at the time, this was Kevin Rudd’s Tampa: “The boat presented the government with a choice and the choice it made was the same one the Howard government made in relation to the Tampa, in essence if not in detail.” Immigration minister Chris Evans had been taking a more measured and humane approach to new arrivals and the government had begun exploring regional cooperation options for reducing the number of risky voyages; Mr Rudd’s intervention undid much of that work overnight. Since then, asylum seekers have been the casualties of a government undermined by its own backflips and equivocations on a range of important issues.

Once Julia Gillard became prime minister the government’s hostility towards boat arrivals hardened. On the recent anniversary of the 2010 election, she told the Age’s Michelle Grattan that she has no regrets. “Labor is the political party that first created mandatory detention in this country way back when, under Gerry Hand as immigration minister…” she said. “I’m absolutely satisfied that mandatory detention is the right policy.”

It’s hard to find any evidence that this increasingly inhumane system is “right.” And the evidence strongly suggests that Labor’s strategy is also electorally misconceived, partly because the government has learned the wrong lesson from recent political history and partly because its asylum-seeker policies draw on one set of polling results – the responses to single-issue questions about “boat people,” which happen to reinforce conventional wisdom – rather than taking account of findings about how people actually intend to vote.

First, though, it’s important to remember that the issue as it’s currently framed belongs to the Coalition. John Howard invested enormous energy and vast amounts of public money in his quest to transform a relatively small number of boat arrivals – most of them eventually found to be refugees – into an existential threat. Until mid 2010 Labor was never much more than a half-hearted supporter of the Coalition’s border protection policies, and in the early months after the 2007 election it reversed many of Mr Howard’s measures. The hardening of Labor’s position since then hasn’t created a sense that Labor is just as tough as the Coalition; it has created a sense that Labor thinks the Coalition was right all along.

This issue is also particularly well-suited to Tony Abbott’s style of campaigning. With the government hanging by a thread, the relentless “no boats” campaign led by Mr Abbott and his ambitious shadow immigration minister, Scott Morrison, is feeding very effectively into the Coalition’s portrayal of a government in disarray. Labor has obliged by letting the Coalition set the terms of the debate; it would be better-advised to wrong-foot the opposition by adopting a strong alternative policy that sets the relatively small number of asylum seekers coming to Australia in a regional and international context.

But there’s a broader question. Do harsh measures against asylum seekers have significant electoral benefits for either party? The conventional answer is yes, but the evidence is very thin.

At the centre of the argument is the result of the 2001 election, often seen as conclusive evidence not only that Australians are deeply concerned by boat arrivals but also that the issue shifts votes. The Howard government, which had been languishing in the polls just months earlier, brought off a dramatic victory in November of that year, and one event – the arrival of the Tampa – is often credited with the turnaround.

But a lot of other things happened in 2001. Early in the year the government tried to buy its way out of trouble with budget handouts and a massive increase in government advertising. Later, the 11 September terrorist attacks in New York and Washington dramatically changed the political background. National security, traditionally a Coalition strength, suddenly became a key factor in the political mix.

By contrast – and despite the hostility expressed towards “boat people” in some polls – the asylum seeker issue didn't feed into the polling on voting intentions in any significant and lasting way. In the first round of polling after the SAS boarded the Tampa, the government’s primary support rose by an average of 3 percentage points across the three main polls. But two of the polls recorded Labor’s primary vote either holding steady or falling by a statistically insignificant 1 percentage point. (The other poll used a very small sample.) On these numbers, the issue had squeezed small-party support rather than Labor’s.

What did eventually give the Coalition a significant boost were the 11 September terrorist attacks, which lifted the Coalition’s primary vote by an average of 7.5 points. But even that advantage largely evaporated over the course of the election campaign, as opposition leader Kim Beazley doggedly campaigned on issues like health and education. On election day Labor’s two-party-preferred vote was 49 per cent, and the government increased its majority from twelve to fourteen seats.

A combination of factors got the Coalition over the line. But there’s little in the 2001 result to demonstrate that the harsh treatment of asylum seekers was a vote-winner. Either people weren’t voting with that issue in mind, or they were already aligned with the party that matched their views about asylum seekers.

None of this stopped Tony Abbott from reviving the Coalition’s attack on asylum seekers in the lead-up to the 2010 election. In late May last year he announced that the Coalition would revive the Pacific Solution and reintroduce temporary protection visas if it won government. Over the next fortnight, six polls conducted by four pollsters gave the Coalition 49 per cent of the two-party-preferred vote – a fall of one percentage point. In the two polls that asked voters to rate party leaders, Mr Abbott’s standing fell by 5 percentage points.

In 2010, as in 2001, the single-issue polls were reporting relatively high levels of concern about asylum seekers, and journalists were describing the issue as “red hot” in marginal electorates. Labor took notice of these polls rather than the voting-intention surveys, and Julia Gillard announced the ill-fated East Timor Solution.

Since then, the government has been trying to match the Howard government’s reputation for “toughness.” This is a dead end for Labor: the opposition will always find shortcomings in its measures, regardless of how harsh they are, and the government will constantly be on the defensive. And for what electoral gain?

As long as Julia Gillard remains leader there’s little chance of change. A party whose greatest long-term electoral strengths are its policies in areas like health and education will continue to draw attention to its difficulties (and internal divisions) by matching the Coalition’s hostility towards asylum seekers. The attitude revealed in the prime minister’s comments to Michelle Grattan – glossing over the mountain of evidence about the psychological impact of detention – and the fact that she has made this issue a key test of the government’s resolve mean that she will find it very difficult to back down.

To reframe the debate (and not just about this issue) the government needs a leader who isn’t so strongly implicated in Labor’s panicky decision-making before last year’s election and the harsh regime it has created over the past year. •

What is the voter voting for?

Norman Abjorensen looks into the mind of the Australian voter 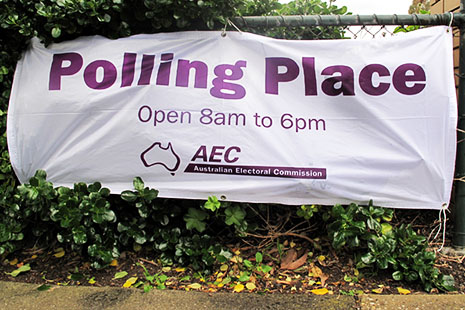