Not shaving to Schoenberg

Why do writers and visual artists seem less interested in living composers than composers are in them, wonders Andrew Ford 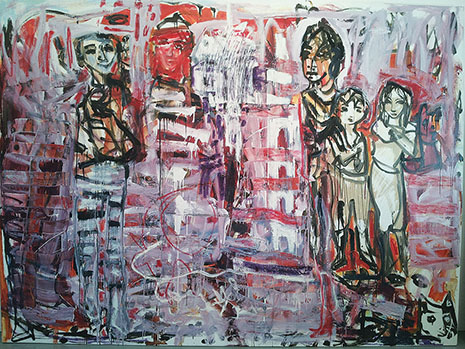 Carlos Barrios’s The Scattering of Light, based on Andrew Ford’s composition of the same name. Courtesy of the artist

There are certain paragons. Two writers I see at concerts from time to time are Rodney Hall and David Malouf. Both are well-versed in classical music in general – Hall has a musical background, Malouf was once beseeched by David Marr to become music critic of the National Times – and both are knowledgeable about new work. The photographer Bill Henson is someone else I’ve bumped into at concerts of new classical music, and not only when his images are being projected. But these are people who are making an effort to listen, leaving home to hear new music. Most visual artists listen on the job and their listening tends to be quite different.

My impression is that, like dancers, visual artists use music to generate energy, their studios resounding – or so I’ve observed – to heavy rock and Dylan (which suggests that little has changed since the days of Brett Whiteley). I suppose it is a bit like a mood enhancing drug, except that with music the consumer is still capable of clear-headed work, and when you think of it, this is only a more extreme version of how many listeners use music to change or enhance their mood, to energise themselves or to relax.

Among my writer friends, there seem to be more who listen to classical music, but it is usually Classical with a capital C – Haydn, Mozart and Beethoven – or baroque music. The surprising thing to me is that, like the painters, they also often listen while they work. Composers can’t do this, any more than we can read books or look at art while we’re working, and you’d think that music would similarly interfere with the thought processes of writers. But more than one writer has explained to me how music cocoons them. They are not so much listening to it as erecting a sonic barrier between themselves and the rest of the world. Cut off from everything else by Bach or Vivaldi, they find they are able to concentrate on their own work.

For obvious reasons, writers tend to eschew music that involves words, and in most cases, they also opt for music that is already familiar to them, and it’s the same with visual artists. Certainly, if the aim is to crank up the volume but ignore the content, that will be more easily achieved if the music contains few surprises. “You don’t shave to Schoenberg,” as Pierre Boulez once remarked. If music demands our attention, it will be difficult to concentrate on other tasks, dangerous indeed if a razor blade is involved.

So it seems there’s not much hope for new music in the painter’s studio or writer’s study, and particularly not for new classical music or jazz, which, on the whole, requires more concentration, over a longer time span, than the latest pop or rock. But none of that explains why writers and visual artists seem in general less interested in living composers than we are in them. Admittedly my evidence is all anecdotal, but I have accumulated too much of it over the years to think I may be mistaken. Occasionally, when two or three composers are gathered together, this subject comes up and we are glum.

I WAS surprised therefore, to walk one day into the studio of my friend and neighbour, the painter Carlos Barrios, and hear my music playing. He’d known I was coming round, and so of course I assumed the music was on for my benefit (I’d given him the recordings myself). But no, it turned out that he had been listening to little else for weeks on end and, what’s more, was creating a series of paintings with titles taken from my music. One of them already had a buyer.

Naturally I was anxious to see what he had produced. He told me that he drew a certain creative strength from the music, but that also the pieces put him in various frames of mind that in turn generated textures, rhythms and images. He also said that the stranger he found the music, the more he liked it.

Carlos’s paintings are typically shot through with a certain dark ecstasy I have always taken to be Latin American in origin (he grew up in El Salvador), and some of these images surprised me. His Elegy in a Country Graveyard, for example, is Goyaesque, all skulls in torment, whereas my piece of the same name is wistful (at least that’s how it seems to me). And so I confess that stumbling innocently on these canvases I wouldn’t necessarily recognise my music as their inspiration. But then often enough I don’t recognise my music from the descriptions in reviews either.

I think what I find so genuinely touching about Carlos’s responses to my music – and I feel the same way about a review that really grapples with one of my pieces, even when it seems to have missed the point – is that he took it seriously and engaged with it. In the end, no listener – however intently they listen – will ever find in the piece exactly what the composer intended (quite often the composer doesn’t, either). But that is how all art works, and especially music.

What gratifies the composer more than anything – and what we hope for above all – is the listener’s effort. •