Has Donald Trump been handed a large, up-to-date arsenal? 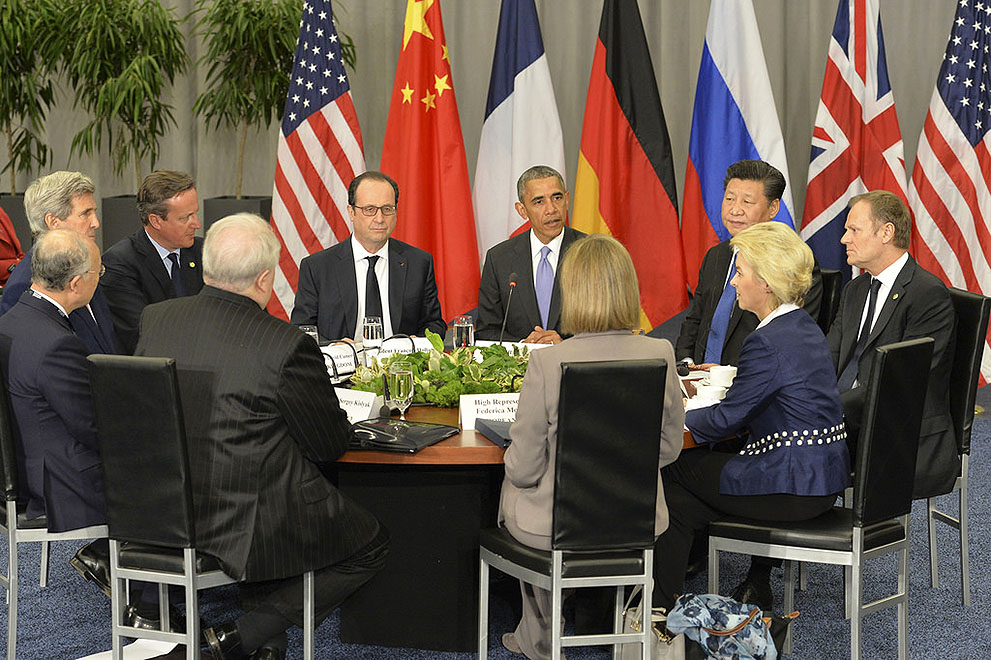 Dashed hopes: Barack Obama and other world leaders at the Nuclear Security Summit in Washington in April this year. Georgina Coupe/Number 10

In stark contrast to anything he could have contemplated in earlier, more hopeful times, Barack Obama is about to hand the world’s most capable nuclear arsenal to none other than Donald J. Trump. Adding to the trouble is the fact that this weaponry is more numerous and modern than we might have expected from Obama’s early promises.

Back in 2008, optimists expected the Democratic presidential candidate to renew America’s sense of moral purpose, not least by working towards the abolition of nuclear weapons. The newly elected president reiterated the abolitionist idea in a speech in Prague in 2009, and a few months later received the Nobel Peace Prize.

That was an age ago. Since then, the United States has intervened in the civil war in Libya, expanded military operations from Iraq into Syria, extended its military presence in Afghanistan, and escalated drone strikes in a range of countries. At about US$600 billion a year, Obama’s military spending has been considerably more than twice the combined totals for Russia and China. (The gap between these potential adversaries and the Western alliance widens even more if you factor in the military spending of Britain, France, Germany, Japan and Australia, who spend about US$200 billion combined.)

Post–cold war nuclear arms reductions, which had gathered considerable momentum from the early 1990s, actually slowed down after Obama took office. You read that right: George W. Bush got rid of more nuclear weapons than Obama did. And in 2010 Obama signed off on a Nuclear Posture Review that included retaining, with some tweaking, the longstanding US option to use nuclear weapons first in a crisis. Despite speculation a few months ago that Obama might sign an Executive Order banning first use, nothing to that effect has emerged.

On top of all that, Obama has approved a three-decade nuclear weapon modernisation program costed at between US$500 billion and US$1 trillion. And as recently as October, the United States voted against a UN move to advance negotiations on prohibiting nuclear weapons, instead preferring much more incremental steps. To critics, this seemed likely to postpone abolition indefinitely.

Nevertheless, progress has been made in reducing nuclear danger. An arms reduction treaty was signed with Russia in 2010; in that same year, Obama led the way on global efforts to tighten controls over nuclear materials; and in 2015, the US president sealed a deal to bring Iran’s nuclear program under control. While significant, though, these steps hardly match earlier hopes.

The answer has to do with a mix of domestic and global politics. On the home front, conservatives ran hard interference, using the unjustified and even preposterous suggestion that Democrats were soft on defence to score points and block policy. For years, Republicans have been motivated by suspicion of agreements as well as bloody-mindedness towards Democratic Party administrations. That’s part of the reason why Congress still stubbornly refuses to ratify the 1996 nuclear test ban treaty signed by Bill Clinton when he was president. It also accounts for the often ill-founded – and sometimes hysterical – opposition to the Iran nuclear deal, a deal that most arms control experts strongly support.

As well, parts of the Washington bureaucracy, including some within the Pentagon, dragged their feet over more ambitious arms control measures. Among other things, those sceptical of the abolitionist project said America’s extensive alliance arrangements – especially the nuclear “umbrella” provided to Japan, South Korea and NATO – constrained how far prudent disarmament could go.

The global context shifted, too, closing the window on more significant progress. Critics are sometimes too quick to blame Washington alone for slow movement on disarmament. This often has more to do with these critics’ desire to strut their anti-American credentials than with proper analysis. The fact is, there’s plenty of blame to go around.

Take Russian leader Vladimir Putin. Having poisoned diplomacy with his illegal action in Ukraine, he’s also recklessly waved the nuclear stick. Large increases in Chinese military spending have also contributed, as has Beijing’s belligerent behaviour in the South China Sea. In fact, the semi-fascist nature of the Chinese government places limits on any US president wanting to coax Congress towards deeper nuclear reductions. Iran’s earlier efforts to push the nuclear non-proliferation treaty towards breaking point also played a role, as have North Korea’s continuing breaches of almost every convention you can think of.

In other words, global conditions have not been conducive to radical advancement of the abolitionist agenda.

It’s too early to tell how a President Trump will change the prospects for arms control. His pronouncements have often been vague, contradictory or even muddled. On the positive side, he might manage to improve relations with Russia, potentially permitting continued downward pressure on nuclear force levels. On the other hand, he has suggested that the selective spread of nuclear weapons might be a good thing. This merges into an implied backing away from key alliances: as Washington pursues “America First,” countries like South Korea could fill the strategic vacuum with their own nuclear deterrent.

A strong theme among nearly all the Republican candidates in 2016, including Trump, was rabid hostility to Obama’s Iran package. Such noisy, almost rabble-rousing, rejection of diplomacy implies that war with Tehran could be back on the agenda. This will partly depend on whom Trump listens to. Alas, John Bolton is one name mentioned here. Picture him as the Voldemort of global security, with a long record as a malevolent spoiler of arms control; in recent years, he’s been a vocal advocate of tearing up Obama’s deal and bombing Iran.

But Trump also says that, apart from fighting Islamic State, he wants to step back from the armed interventionism associated with previous administrations. Yet he claims the US military is under-resourced. It seems he wants the Pentagon to do less with more.

Among Trump’s blustering back-of-the-envelope strategic musings is the declaration that “I’m going to make our military so big, so powerful, so strong, that nobody – absolutely nobody – is gonna mess with us.” But if he is to ramp up spending on nuclear weapons beyond current projections, where would the money come from? The question arises because he’s also called for tax cuts combined with massive investment in urban infrastructure and a big boost for conventional military forces. This sort of thing used to be called voodoo economics.

Besides which, a push to increase nuclear capabilities any further makes little strategic sense. Existing, pre-Trump strategy already permits the US to indefinitely deploy over 1500 operational nuclear weapons, with thousands more in reserve and a major modernisation plan already factored in. So, after he theatrically rearranges the window dressing for political effect, it’s easy to imagine Trump sitting back and allowing nuclear weapons policy to follow tracks already laid down.

In short, Obama’s legacy could be to provide the remarkably suspect Trump with an entrenched and increasingly well-tuned nuclear arsenal. Many of Obama’s supporters will see the irony; some of his more ardent and naive fans from 2008–09 might feel betrayed. •

Andy Butfoy is a former senior lecturer in international relations at Monash University, and author of The Credibility Vortex.

Against oligarchy: the book of Bernie

Man for the moment: Bernie Sanders on his feet earlier this year. Phil Roeder/Flickr 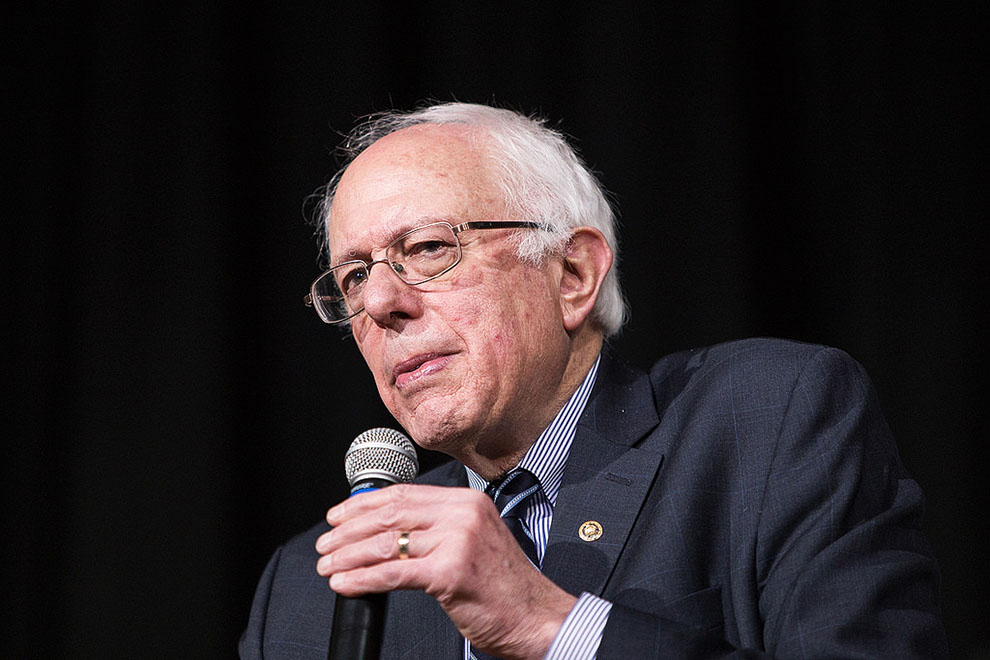 Man for the moment: Bernie Sanders on his feet earlier this year. Phil Roeder/Flickr