Sylvia Lawson reviews The Iron Lady and The Ides of March 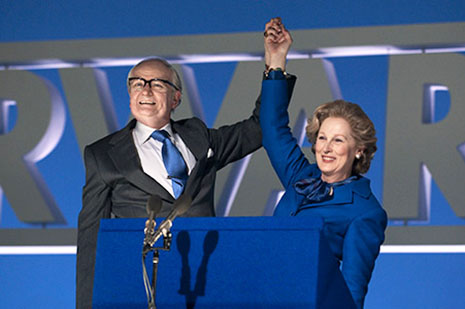 THERE were long queues for The Iron Lady at my local Dendy. It seems to work as the holiday choice for grownups; after steering the kids through Tintin, the Harry Potter exhibition and the Muppets, people head off to the Thatcher film for an hour or so of engagement with the real world and recent history – though that’s not exactly what they get. On its surfaces the film is fluently pleasurable, with a compelling rhythm in the recurrent movement between the shadowed present of the aged, housebound Thatcher and her past times at centre-stage. Meryl Streep’s performance goes beyond inspired mimicry; she performs that Thatcher whose ascent among the Tories was powered by skill and conviction, with the calculated appeal to the wisdom of the honest housewife trading heavily on her special notion of common sense and personal responsibility for just about everything. The unions must be dealt with firmly, and there are no troublesome geo-politics involved in the war over the Falklands. That situation is simple; the islands “belong to Britain, and I want them back.”

So small-business capitalism triumphs at home, and an amazingly old-fashioned imperialism gets away with it – temporarily, anyhow – abroad. You’ve only got to look at the PM in her blue suits, with the mandatory pearls and helmet hairdo (and if you’re female and old enough, think about what we were actually wearing in the ’80s), to see that she was out-of-date to begin with: the presentation expressed not conservative politics, but a whole reactionary program. Why and how so much of Britain fell for it are questions the film doesn’t even try to address.

With an uneven stoop, and convincing prosthetics on face and neck, Streep quite brilliantly inhabits the floundering old woman, suffering her own decline and seemingly uncertain about how she ever got there. Here the director, Phyllida Lloyd, and writer Abi Morgan go bravely into the domains of old age and dementia; some have seen their film as primarily an essay on that life-territory. It has been reported that Mrs Thatcher, as she now is, has forgotten that her husband Denis has died; in the film, she is repeatedly in conversation with his shade (Jim Broadbent, splendidly down-to-earth and unghostly) so that while he was her faithful support in life, he’s now her fantasy-refuge from senile desolation. Pathos is allowed its moments – Maggie buying her milk and finding that the price is up to 49p; her hands in the sink, washing up a single fine, gilt-edged china teacup.

Their younger selves (Alexandra Roach and Harry Lloyd) are plausibly charming; the only feminist issue at the outset is an individual matter – it appears that Denis wanted to marry her because of her ambition, not in spite of it. From there, the striking aspect is her gendered isolation; the blue suit is constantly seen solitary in a crowd of dark male ones, and there are simply no female coevals – where, for example, was Barbara Castle, and Margaret Thatcher’s contemporary, the Queen, with whom, after all, she did have to deal for more than a decade? Discussing responses, people hesitate to mention the issues, as though they didn’t want to be caught at political correctness.

There is an argument, and it can be strongly held, that any film should be judged on its own claims and in its own terms; this one is a kind of biopic about a national leader who left the stage more than twenty years ago, and the invited response is centred on her impressive rise and fall. While her wrong-headedness is there on show, it also seems as though old age has allowed the film-makers a kind of alibi for history. Some have taken the film on its own terms and enjoyed it, politics regardless; many others, who can’t forgive Thatcher, monetarism and neoliberalism in general, don’t forgive the film either. One friend of mine angrily called it “an apology for the dispossessions of capital.” Several American reviewers found it confused and confusing on policies and events; the New Yorker’s David Denby found it “an oddly unsettling compound of glorification and malice [which] whirls around restlessly and winds up nowhere.”

Had the film’s material been worked into the kind of fiction we get with The Ides of March, these charges wouldn’t stick; the problem is that once history has been named, it should be dealt with. You wouldn’t know from this version how much conflict there was within and among those working classes whom Thatcher was determined to chastise, and there’s no part here for Arthur Scargill. The bomb in the Brighton hotel doesn’t kill Denis or Margaret, but we get no sense of the IRA’s reasons; and as the economic medicine was dispensed, there were more than three million unemployed in that prime minister’s Britain. The striking miners are seen, both visually and conceptually, as a single raging mass, and I was reminded of the late Raymond Williams’s most famous sentence: “There are no masses; there are only ways of seeing people as masses.” The last thing he’d have denied, however, was the existence of society; in a famous line not included in the film, Thatcher said there was no such thing. The film to communicate her legacy might well be documentary history, and surely it wouldn’t leave out one bit I really wanted – the lady’s dealings with Mikhail Gorbachev? “We can do business with him” – remember? The film-makers didn’t, and being too young is no excuse. Archival news footage is powerfully evocative, and there’d be no need for scripted dialogue.

Jean-Luc Godard has insisted on the difference between making political films and making films politically. The latter, in Godard’s own five decades of practice, is a matter of styles and strategies, with little or no investment in individual destinies – though if you want politics and everyday life, there’s nothing tougher, or funnier, in all modern cinema than the shoot-out between Yves Montand and Jane Fonda in Tout Va Bien (Everything’s OK, 1972), when it’s about mixed motives, principles and personal journalistic ambitions. The repair of the couple, however, does not override what the film shows about the factory workers and the population of the hypermarket; and (four years after May ’68) it doesn’t resolve the question about how leftist intellectuals, film-makers included, are to find their positions when progressive movements have been defeated by the Right. It’s that question which the film explores, performs, makes visible.

Forty years old this year, Tout Va Bien remains as modern as tomorrow. I wish George Clooney, with all his good intentions, would pick up the DVD and take a look at it; but The Ides of March is every bit as old-fashioned as The Iron Lady. Here too it’s all about individuals, and it must be said that they’re superbly and enjoyably played, by Clooney, Paul Giamatti, Philip Seymour Hoffman, and Ryan Gosling as the corruptible young aide on the make. They hand lots of ammunition to the enemy; all the shifting, lying and double-dealing takes place within the Democrats’ domain, and the framework seems to belong to the Clinton era rather than Obama’s. The girl, the blonde victim (Evan Rachel Wood), is an intern, and one obvious point in this gloomy, fatalistic scenario is that there’ll always be other interns, and they’ll be fair game. But there’s no Monica Lewinsky figure; it seemed to me that the echoes went back further, and the story was really about the Kennedys and Marilyn – she’ll never leave the stage. Marisa Tomei’s moments as an acute and persistent New York Times reporter lift the whole enterprise. Had there been more focus on her and her enquiries, we might have had a film just a bit less male-dominated, and one that told us something we didn’t know only too well already.

AFTER all that conformism, Pedro Almódovar’s gender-bending in The Skin I Live In was great refreshment. I’ll see it again, and comment further. Meanwhile, there’s other holiday fun in the Steven Spielberg–Peter Jackson Adventures of Tintin (3D), best seen in the company of a Tintin reader aged not much more than twelve. One of that generation tells me that the 3D glasses don’t really make much difference, but I used them and enjoyed the whole thing. Catch, if you can, Bill Cunningham New York, the documentary essay on the humane, unsinkable NY Times street photographer; he and the film are very intelligent delights. •

Sylvia Lawson’s next book is Demanding the Impossible: Essays on Resistance, due out in February from Melbourne University Publishing.

Richard Johnstone’s paperback of the month, Death and the Dolce Vita: The Dark Side of Rome in the 1950s

Detail from the cover of Death and the Dolce Vita 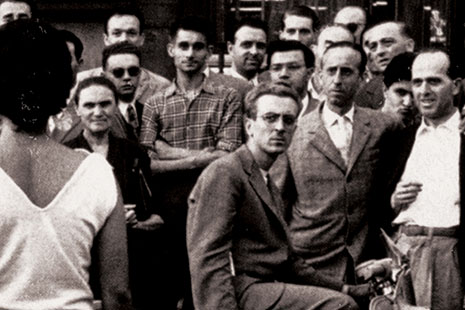 Detail from the cover of Death and the Dolce Vita